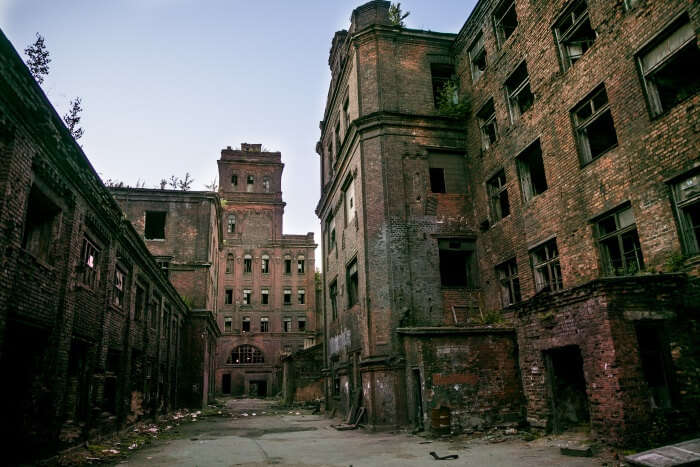 Being the largest country by area across the globe, Russia incorporates a vast range of landforms and spans a total of 11 time zones. It shares land borders with countries like Estonia, Finland, Norway, and Poland etc. and is known for covering over 1/8th of Earth’s occupied land area.
Apart from the ancient museums and lovely Russians, what makes this amazing country a mysterious puzzle are some abandoned and creepy places that will scare you to the core. Finally, it is time for you to relive all those classic horrifying moments from your favorite cult movies. From Stalin’s country house to the Diamond mine in Yakutia, there are so many haunted places in Russia that you will remember for life.

There is no denying the fact that Russia is an incredibly wonderful country with beautiful churches and delicious cuisine but when it comes to horror, it takes you to a next level. that you will definitely end up having goosebumps on your next visit.

It was built on a territory of the hospital constructed for the participants of the patriotic war that took place in 1812. After becoming the maternity hospital in the 2nd half of 20th century, it was closed due to reconstruction in the year 2009. Despite the fact that this building has been abandoned for so many years, it is quite astonishing to witness that the hospital still has the central heating which is rather clean. There is a reason why it comes under the category of the most haunted places in Russia as the place looks like the torture chamber from a horror movie. The Maternity hospital has been the major tourist attraction for a long time and a lot of enthusiastic bloggers often come here on a regular basis to find out the reason behind the peculiarity of this building. What adds to the weirdness of this place is the fact that a lot of pregnant Russian women want to deliver their baby in this particular hospital. This is the perfect place for those who had a thing for scary hospitals and its creepy corridors.

2. The Kusovnikov House in Moscow

Situated on the Myasnitskaya Street in the Central Moscow, this 19th century House No.17 was used to be the residence of Pyotr and Sofya who were extremely greedy. They were also very suspicious about whether their money is safe or not and that is why they used to hide it in different and unusual places. They adopted this trick so that none can steal their money but what they didn’t know was that one day, it would be the reason for their own destruction. It is said that one unfortunate night, the caretaker accidentally burned their hidden money in the fireplace and they died on the spot due to the shock. Since that day, a lot of people have witnessed the ghost of an old humped man, considered by them as Pyotr Kusovnikov on the nearby street who mourns the loss of his money. So, if you are planning to take a night walk on this street, make sure to think twice before you end up bumping into him.

Are you someone who is fascinated about those mysteries about Bermuda Triangle and wish to visit a place like this? If yes, then you must go to the Mirny Diamond Mine at least once in your lifetime to witness something extraordinary. Once a source of jobs and revenue for the Russians, this place was earlier known for producing the most amount of the precious Russian diamonds. The city that surrounded this huge mine was full used to be a busy one with a lot of happy and cheerful citizens. Although this deserted mine is now closed till now, there has been not been any clear scientific explanation of why every helicopter that flew above this hole got sucked into it. Strange for a diamond mine, isn’t it? Well, if you wish to visit the popular scary places in Russia , then do not forget to pay a visit here and explore the mystery of this place. When it comes to the biggest open-pit mines, this place still comes in the top 5 list which is enough to explain its importance in the old times.

In the year 1988, this wonderful 247 room’s hotel was commissioned by the Soviet Union to overlook the Karpovki River in the city of St. Petersburg. But, the destiny had some other plans since its construction was almost completed when the project was abruptly stopped due to the lack of money. Then what happened was the destruction of this glorious hotel as it eventually became an abandoned place and never had the opportunity to host any visitor. Plenty of locals also believe that this unfortunate event is related to the demise of Metropolitan Ioann of St. Pete. He died in Northern Crown during a reception in the honor of the 5oth birthday of Bank St. Petersburg. Even today, the rooms look as luxurious as ever but the building cannot get repaired now.

Suggested Read: It’s A Good Time To Be A FIFA Fan If You Want A Visa-Free Entry In Russia

This splendid but creepy castle has to be in the list of top haunted places in Russia as the moment you step into it, there is a different and eerie aura that you can feel at every nook and corner. This is the only palace of St. Petersburg but this is not the major reason why it is the source of attraction among the local as well as international tourists. The cause of its immense popularity is that it is a permanent resident of the most well-known ghost of the city which is tsar Pavel I. He initiated the construction of this place which became its refuge after the process was completed. He suffered a tragic death while being killed by the soldier’s drunken mob that just needed to arrest him in order to make his son the new king. You can still watch him playing his favorite instrument, violin through a specific window in the fortress that is, let’s admit, more creepy than interesting.

More than a 300-year-old history, this country is a perfect blend of modern art and historical sites which is why a lot of tourists from all over the world come to visit Russia. Moreover, you can also book your tickets on TravelTriangle, and visit these haunted places in Russia to explore some dark, intriguing and unexplainable parts as well.