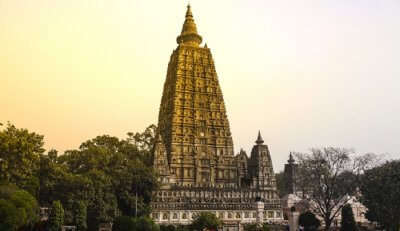 The glorious history of over 3000 years of the ancient land of Bihar welcomes you to enjoy the vibrancy of the culture and find solace in ancient temples. Known for its gift to the world, like the political system of the republic, first well-established university, religions like Buddhism and Jainism, this oldest inhabited land offers you a vast array of attractions to explore. 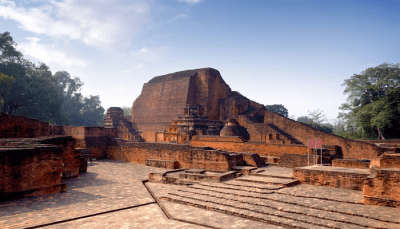 9 Best Places To Visit In Nalanda That Will Get You Close To The History And Culture Of The City!

Once a center for learning. Nalanda was once visited by monks and tourists from all around the world and is known for its Buddhist sites and monuments. Nalanda flourished during the regime of several rulers like and Buddhist emperors and it was then when the province shot to prominence. Ruins of the center of learning can also be found in the city and today it is known as the Nalanda University with about 2000 teachers and 10000 monk students from around the world. Moreover, you will find several ancient stupas, monasteries, temples and chaityas in the city which were known to be built by the Gupta Kings, Ashoka and Harshavardhana on your Nalanda sightseeing tour. Nalanda is full of architectural as well as historical structures on their vacation. Some of the best places to visit in Nalanda are The Great Stupa, the Nalanda Archeological Museum and the Nalanda Multimedia Museum. Here is all about the attractions to visit in Nalanda, to make your trip a memorable experience.

9 Best Places To Visit In Nalanda

Nalanda is popular for its ancient museums and beautiful architecture. Here are all the places you must not miss, while vacationing in the city. 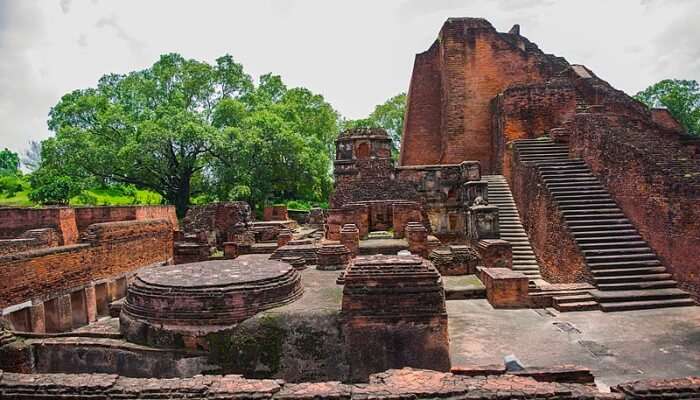 Image Source If you are a history buff, this great place in Nalanda was published by the Bihar government in 1951. The place showcases the ancient tradition to the modern world. Built as a modern centre of Buddhism, and today departs education related to ancient Pali script and the Buddha religion. For history buffs and explorers, this is one of the best places to visit in Nalanda. Location: Nalanda University Site Rd, Bargaon, Bihar 803111 Timings: 9:00 AM to 6:00 PM

Must Read: Visit These 5 Temples In Bihar To Feel A Connection With The Divine In 2020 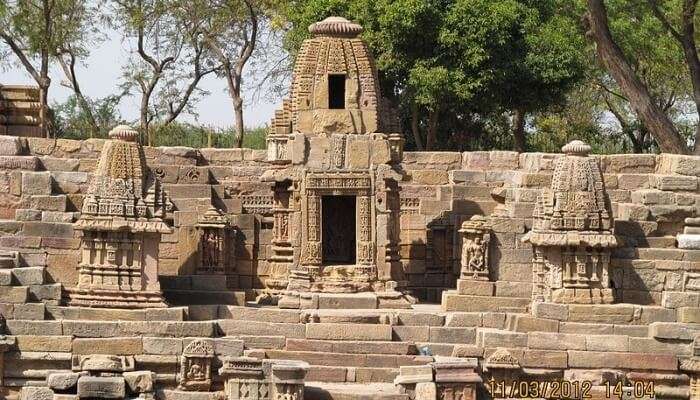 Image Source Dedicated to the Sun God, this temple is situated near the Nalanda University and occupies shrines of various Buddhist as well as Hindu deities. The temple also houses a five feet high idol of Goddess Parvati. The popular Chatth Puja is conducted in this temple twice every year and it is celebrated with great fervor. Many devotees visiting this place in Nalanda pay their respects to God. Timings: 6:00 AM to 8:00 PM

Suggested Read: 17 Marvelous Places To Visit In Patna Which Will Take You Down The Historical Lane In 2020! 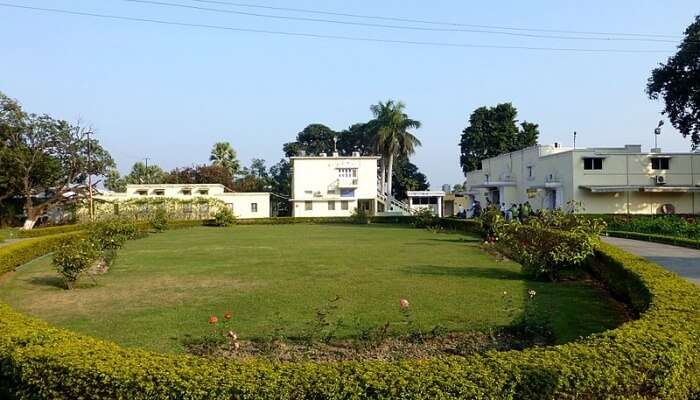 Image Source The museum holds ancient relics of Nalanda University and offers a glance into the culture of ancient Nalanda. You will find a variety of artifacts in the museum ranging from statues to other displays of art and this is one of the best places to see in Nalanda. The Museum specifically displays Pala Art through the assorted artifacts maintained here. There are also statues engraved in basalts stone while others are made of stucco, bronze, stone, and terracotta displayed at the museum. Location: Nalanda, Bihar 803111 Timings: 10:00 AM to 5:00 PM Entry Fee: INR 5

Suggested Read: 11 Impeccable Things To Do In Patna That Makes A Trip To The Popular City Worth While In 2020! 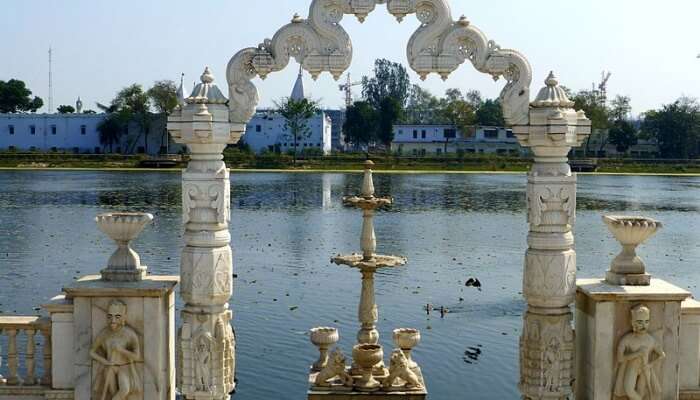 Image Source A holy site for the Jains, Pawari is situated in the Nalanda district of Bihar and is one of the best places to visit in Nalanda. This Nalanda tourist place gained its significance due to the fact that in 500 BC, it is believed that Lord Mahavir was buried here. The sacred pond at the site holds a significant place and is known to be built by the removal of a layer of soil while collecting the ashes of the Lord. Later, the Jalmandir Temple was built in the center of the pond and hence is visited by devotees from all over the world. Location: Pawapuri.JAL.mandir, more, rod, Pavapuri, Bihar 803115 Timings: 5:00 AM to 9:00 PM

Suggested Read: 38 Places To Visit In Winter In India In 2020 Which One Cannot Miss! 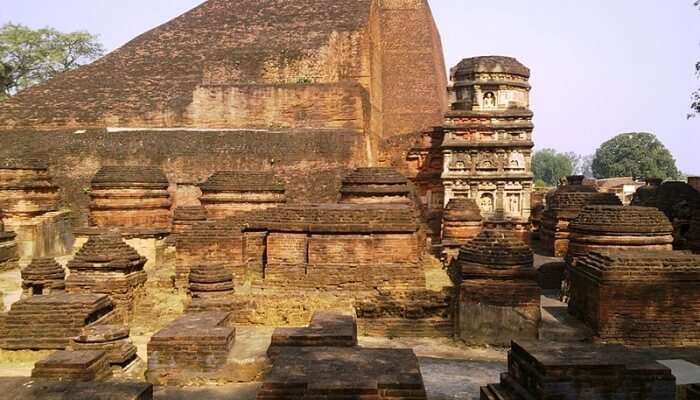 Image Source Built-in the 3rd century by Ashoka, this stupa is amongst the ruins of Nalanda University. The structure is shaped like a pyramid and is flanked by a flight of steps and splendid sculptures. The Great Stupa is one of the most popular structures in Nalanda and a popular Nalanda tourist spot. Location: Nalanda, Bihar, India

Suggested Read: 33 Best Places To Visit In November In India (2020) Which One Cannot Miss! 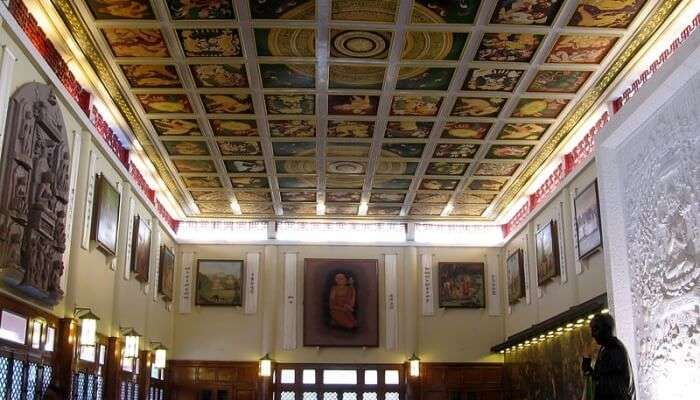 Image Source One of the most popular tourist stopovers in Nalanda, the Hiuen Tsang Memorial Hall was built in the memory of a popular Chinese traveler who had come to study Buddhism and mysticism in Nalanda University. The memorial hall contains a lot of documents that are a major source of history in Buddhist writing. Among the many places to visit in Nalanda on your vacation, this attraction holds a prominent place. Location: Near Nalanda University ruins Nalanda, Rajgir India

Suggested Read: Longest Rivers In India: Know About The Important Water Bodies Of The Country In 2020! 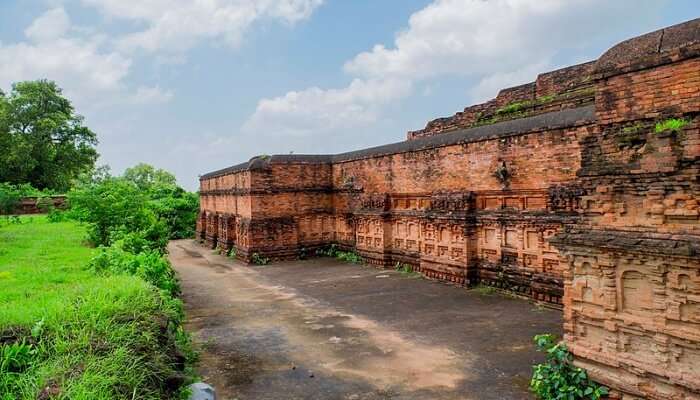 Image Source Nalanda University is famous as the ancient seat of learning and ruins of the world’s most ancient university lie here. The University was resurrected in 2007 and has the best architecture in the world. The Nalanda University is a prominent attraction for both Indian as well as International tourists and is a must-visit attraction in the city. Location: Rajgir, Bihar 803116 Timings: 9:00 AM to 5:00 PM Entry Fee: INR 15 for Indians and SAARC and BIMSTEC citizens; INR 200 for foreigners; free entry for children below 15 years of age

Suggested Read: 19 Ancient Temples In India One Must Visit To Witness The Beauty Of The Marvelous Architecture In 2020! 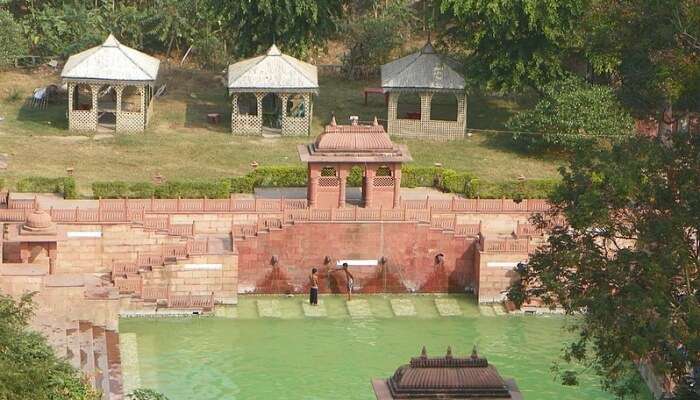 Image Source This scenic town is located in the Nalanda district of Bihar and is set in a verdant valley surrounded by five hills. The town is popular for its hot spring that is believed to have medicinal properties. The town is a complex of temples and monasteries and was once the capital of Magadha Mahajanapada. This naturally fortified destination is one of the most ancient sites of learning in India and is also found to be mentioned in Mahabharata. For a peaceful and relaxing ambiance, this is one of the best places to visit in Nalanda.

Suggested Read: 39 Best Places To Visit In October In India In 2020! 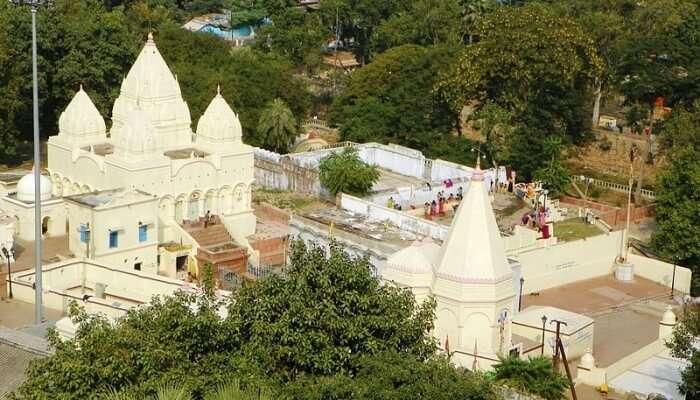 Image Source Lying towards the North of Nalanda is the Surajpur Baragaon which is known for housing a lake and a temple dedicated to the sun god. One of the most ancient and popular attractions, this place is visited by a large number of pilgrims during the Chatt Puja.

Further Read: 38 Places To Visit In Winter In India In 2020 Which One Cannot Miss!

Nalanda is known for its history and its architectural significance. You will find a large number of stupas, museums and temples in the area that hold a prominent place in the history and culture of our country. While the city houses some of the best attractions, there are a lot of places to visit in Nalanda on your trip. Do not miss out on these beautiful places on your trip to Bihar! Disclaimer: TravelTriangle claims no credit for images featured on our blog site unless otherwise noted. All visual content is copyrighted to its respectful owners. We try to link back to original sources whenever possible. If you own rights to any of the images, and do not wish them to appear on TravelTriangle, please contact us and they will be promptly removed. We believe in providing proper attribution to the original author, artist or photographer.

Frequently Asked Questions About Places To Visit In Nalanda

[sc_fs_multi_faq headline-0='h3' question-0='What is the best time to visit Nalanda?' answer-0='The best time to visit Nalanda in between the months of October to March when the weather is pleasant and suitable for sightseeing. ' image-0='' headline-1='h3' question-1='What are the best hotels to stay in Nalanda?' answer-1='Some of the best hotels that travelers can consider to stay at during their trip to Nalanda are: 1. Indo Hokke Hotel 2. The Rajgir Residency Hotel 3. Nalanda Guest House 4. Hotel Glory Grand-hotel In Rajgir ' image-1='' headline-2='h3' question-2='What are the best things to do in Nalanda on a vacation?' answer-2='Some of the things that travelers can engage in on their vacation in Nalanda are: 1. Cultural Tours 2. Historical Tours 3. Boating 4. Sightseeing 5. Safari ' image-2='' count='3' html='true' css_class=''] People Also Read: Sonepur Mela 2020: Know About History, Main Attractions, Stays, How To Reach, And Tips! 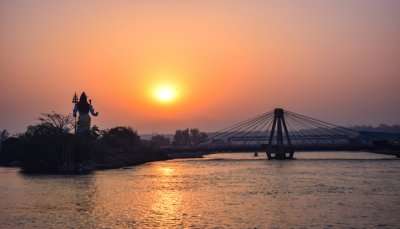 Capital city of Bihar, Patna is a land that is always bustling. This ancient city is sitting on the southern bank of the mighty Ganges river. Offering fine alchemy of ancient and contemporary worlds, Patna is a city that is filled to the brim with crowds. This town is certainly an acquired taste. 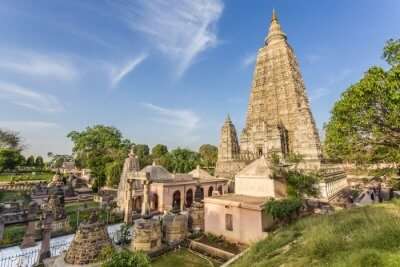 Mahabodhi Temple: A Complete 2021 Guide To The Majestic Temple In Bodh Gaya!