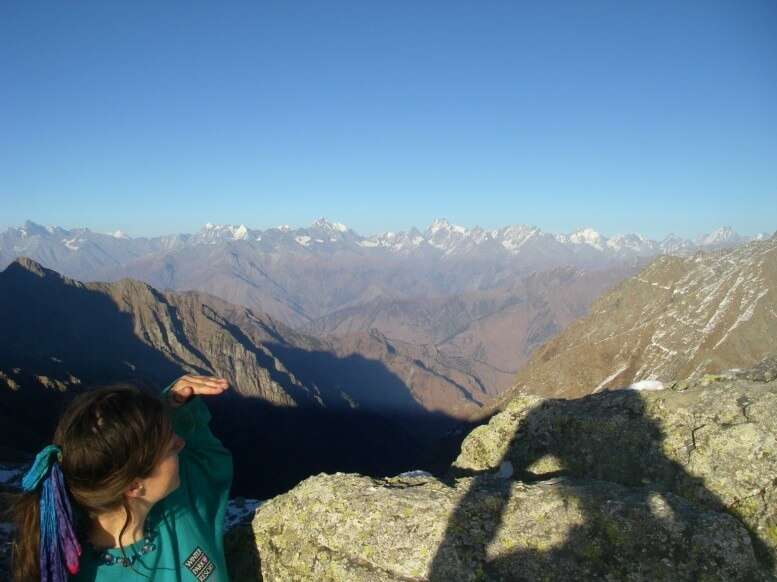 I was scared, their words made it worse but I knew I had to do this. Coming all this way crossing seas with the dream of embracing the majestic Himalayas in my heart; I wasn’t going to let anyone or anything stop me from my expedition. I’m Jessie and this is my Himalayan tale and how we came out alive! Jessie Farbstein was born in Colorado usa. She started moving at 16 and since then has been around the globe twice. Her personal motto is to just say yes.

Against all odds the dangerous dream incepted! 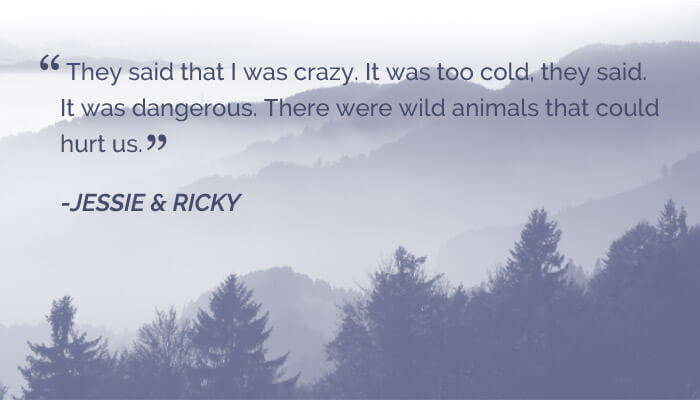 When I started telling the monks in the village that I was planning to hike up into the Himalayan Mountains with my friend Ricky and sleep in a cave, they said that I was crazy. It was too cold, they said. It was dangerous. There were wild animals that could hurt us. The locals asked me to at least have a guide with us. Ignoring all their advice, we set out late for our first camp.

As we strolled through the village, weighed down with our packs, all the stray dogs in town picked up our scent and many of them started up the rocky mountain path with us. 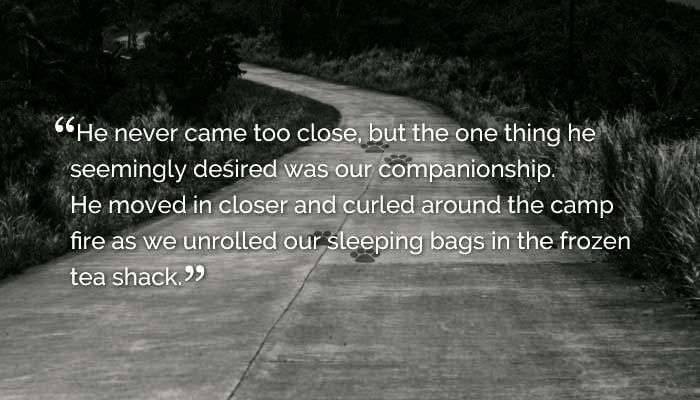 We followed the river and climbed hundreds of stairs, which wove through houses and temples before finally giving way to the mountain side. The further we got from civilization, the fewer were the dogs biting at our heels. We didn’t really want a bunch of mangy stray dogs begging off us the whole way up, so we didn’t encourage them to follow us. By the outskirts of the tea shack, where we planned to stay over the night, we were down to just one follower, who we decided to name ‘Noddy’. He never came too close, but the one thing he seemingly desired was our companionship. He moved in closer and curled around the campfire as we unrolled our sleeping bags in the frozen tea shack.

We all woke up with the sun and set out early. After the snowline tea shack, the rolling foothills turned into fields of boulder, eventually giving way to the rock faces that make up the entrance to the Himalayas. We wove through the field of boulders that ranged from the size of a basketball to that of a small apartment building. Messages of peace were painted on the rocks all around us.

The real journey begins with peace, love and spirituality guiding us… 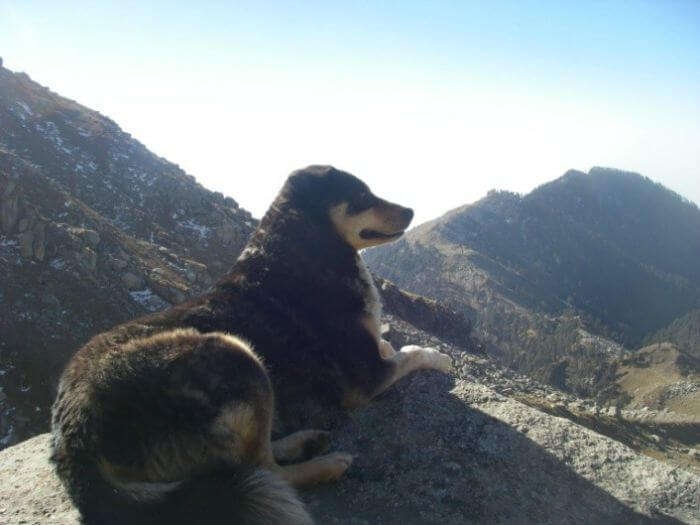 Following the ‘Om’ signs and arrows painted on the rocks, we made it to the cave we where we set up that night’s camp. Noddy found the largest boulder and walked to the end, where he laid staring out to the Indian plains below us. His paws curled over the end of the rock and the thin air blew through his thick hair. You could tell that he had been to this spot a thousand times over but never got tired of it. The wind of the Himalayas whispers of a freedom that few lucky souls will ever experience and he was proud to be one of them. 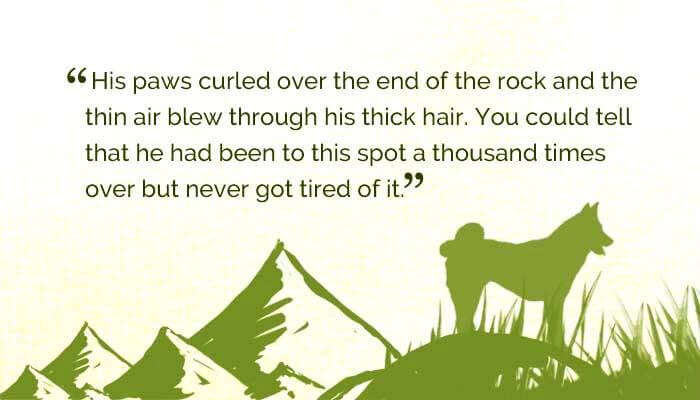 Once we left the cave, the mountain rose skyward like a never ending wall in front of us. There was nothing left of the trail as we continued bouldering up the rocks. It steadily grew steeper until finally we got to a four meter wall with no way around. Ricky and I climbed up the cracks and turned back, looking down at Noddy. He was a little grey around the edges, but he kept trying to scramble up the wall. Every time he would crash back down with the stones to the ground below him. We looked at each other and decided we couldn’t watch any more. It was time to say goodbye to him. Sadly, we turned our backs on him and continued on. For the first time of the whole trip he broke his silence. He whimpered desperately to remain a part of the hiking party. We walked away alone. 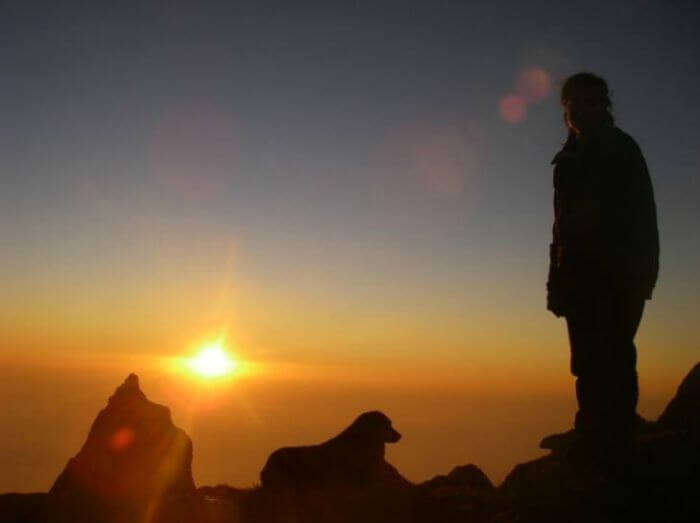 Then, five minutes later, he suddenly appeared out of nowhere. Noddy was back at our heels! This developed into a pattern. We would climb walls that no animal without thumbs could. Standing at the top we would watch him try every angle of the wall in vain, always crashing back down to the earth. He would keep trying and trying till all hope was lost and we would turn to walk away. After we had made it a few hundred feet up the mountain he would silently appear behind us again. We tried to hide and watch him but he would just sit at the bottom of the wall until we got bored and moved on. Then suddenly he would be there silently following us upwards.

The most difficult part began: Pounding headaches and short breaths 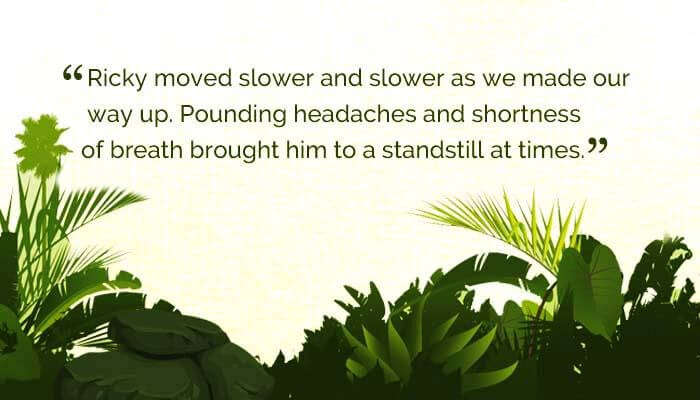 The climb was tough. Before the top, Ricky started to feel the effects of the high altitude and thin air. He moved slower and slower as we made our way up. Pounding headaches and shortness of breath brought him to a standstill at times. Our summit time had long passed and we were still headed up.

It was well past high noon by the time we reached the top. On one side the earth fell away until it lay flat like a patchwork blanket. On the other side, the mountains rose, range behind range, until the indigo of the mountains melted into the blue of the sky. We knew we were behind schedule and spent the precious few minutes gazing over the pass into the never ending Himalayas.

At long last- Our home made of stones 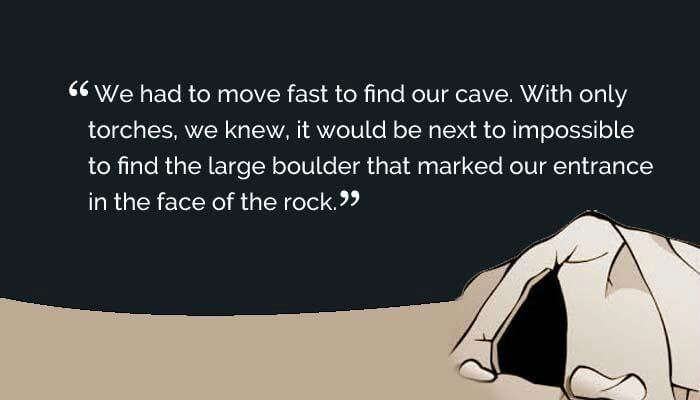 By the time we were half way down the mountain, the sun was setting. Bright red light filled the sky and burned like fire over the mountains. We had to move fast to find our cave. With only torches, we knew, it would be next to impossible to find the large boulder that marked our entrance in the face of the rock. We moved as fast as possible. The thicker the air got, the faster Ricky could move. With the sunlight fading away into darkness, all the rocks looked the same grey colour. After a while, I began to think we were close. Ricky, however, was positive we had to keep going down. After a few hundred meters more I was sure we had missed it. We stopped and started making our points on why we thought the cave was in opposite directions. 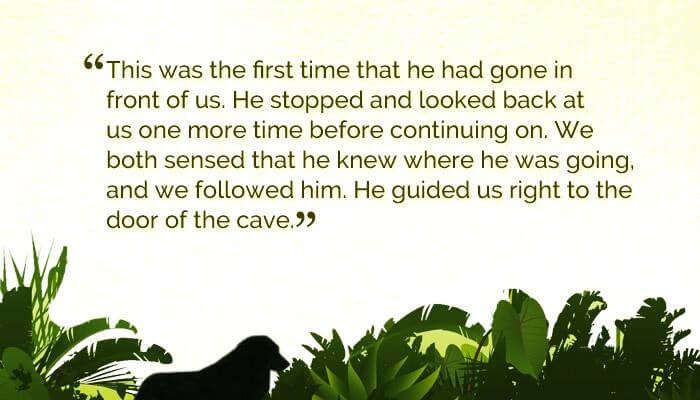 Then Noddy made the second and last noise I ever heard him make. Standing three meters away he looked at us and barked once, and then kept walking. This was the first time that he had gone in front of us. He stopped and looked back at us one more time before continuing on. We both sensed that he knew where he was going, and we followed him. He guided us right to the door of the cave. Both of us were wrong about where we thought the cave was. We built another fire and once again Noddy curled around it, looking out from the warmth of the fire with the mountain to our backs the stars shone with a piercing intensity that I have seen nowhere else.

Bidding goodbye to the mountains

After a long lazy breakfast we continued our journey back down the mountain. With the sun now on our side, we had the time to stop and see all the wild Hindu and the peaceful Buddhist temples that were sprinkled over the mountain below us. One was a stone structure made from the local shale. It was only large enough to house a small statue of Shiva. The outside was surrounded with tridents and red flags that paid homage to the gods. We stopped to eat lunch near a large white temple. The only distinguishing feature was the domed roof with a tiny red flag on top. Unlike all others, this one held no relics or paintings. It shone an untarnished white atop the grey mountain, contrasting with the deep blue sky. 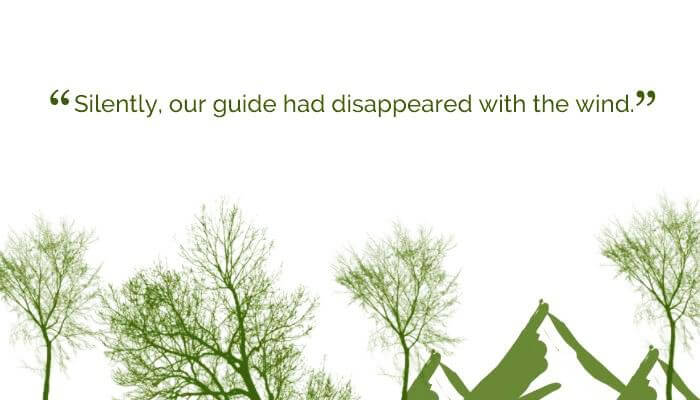 As we got up to leave, down the mountain, Noddy started to walk the other way. We watched him as he walked into the door of the temple. He turned round and looked out at us with the same piercing look he gazed over the plains with. We called him to us and walked on. When he didn’t come to us, we looked back up to the temple to discover that he was gone. Silently, our guide had disappeared with the wind. 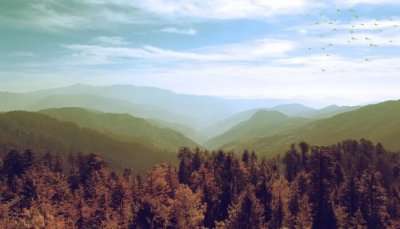 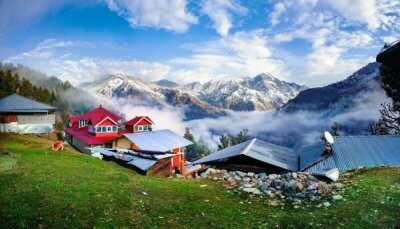 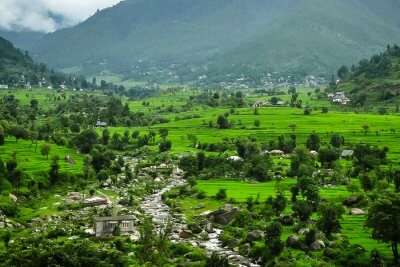