Where The Land Romances The Sea: A Honeymoon Trip To Andaman 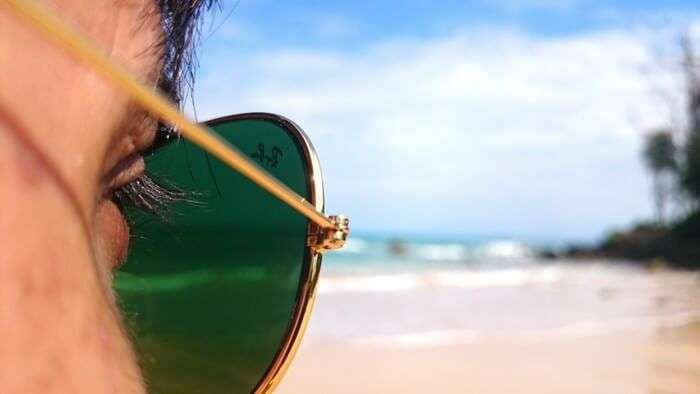 Struck by the magnificence of Andaman, Abhinav Rajput and his wife Pooja booked their honeymoon package to this paradisiacal land through TravelTriangle. At a price of INR 27,500, his Andaman package included his accommodation, some meals, local sightseeing, transfers on private basis, with complementary Snorkeling. Now considering Andaman to be the supreme among the other honeymoon destinations in India, here is what he has to share.

Andaman had fascinated my wife since a very long time. And when it came to deciding our honeymoon destination, our basic priority was that we wanted peace and privacy amidst the nurturing clasp of nature. Andaman fit the bill in every way and that’s how the location was finalized. Now when it came to deciding how the trip would be executed, we took recourse to the internet. On discovering TravelTriangle online, we put in a request for the sake of getting a package customized. We got quick responses which helped us a great deal in making up our minds.

Our cab driver was present at the Veer Savarkar Airport in Port Blair, to receive us and take us to our hotel — My Island Residency. We were thoroughly enjoying the views on the way and the refreshing air of Andaman but on reaching the hotel, I grew a little disappointed. I called my travel agent to raise a request for an up-gradation of the hotel, which could not happen. The problem I had with the hotel was with its ambiance though the room of the hotel was spacious and clean, and the rest of the things were also satisfactory. Eventually, we settled for it, considering that a change would consume unnecessary time.

The journey to Andaman had been tiring. So we rested at the hotel for a while and in the evening, went to a nearby beach to experience the sunset in Andaman. However beautiful the sunset was, we could not spend much time there since we had to go to the Cellular Jail. For a honeymoon trip, one might be skeptical about visiting a “jail” so to say, but it was a good experience for us. The light and sound show acquainted us with historical facts and the concept behind the jail. Once we returned to the hotel, we straightaway crashed on the bed
to recover our sleep.

Early morning, we started for Havelock on a (two-hour long) ferry ride. We got a pick up from the shore and were transferred to the resort — Orient Legend Beach Resort. Now this resort was of the sort that a honeymooner looks forward to. The beach was just 50 meters away, the location was apt and everything admirable was visible from our room’s window. We quickly checked in and without wasting any time, left for the Vijay Nagar beach.

The whole sunny afternoon was spent at the Vijay Nagar beach, as we rejoiced the lush greenery and the infinite view of the sea. There were not many people present at the beach, and we rejoiced out time in peace.

Havelock is a paradise in itself, with two beautiful beaches in its vicinity. So the next one on the list was the Radhanagar beach — one of the biggest beaches in Asia. I had been to a lot of beaches earlier, but I have to say, that these beaches were different. Each one had its peculiar features and specialties, some unique characters which the eyes could distinctly recognize. Simply put – the beaches were breathtaking and perfectly resonated with the mood. Retreating from these beautiful shores, we left for the resort.

Day 3: Adventure in the water

The romance of Andaman was overwhelming, but now was the time for some adventure. For the water sports activities, we were scheduled to go to the Elephanta Beach. But due to unsuitable weather, we were taken to the Lighthouse beach instead, which is a sort of a backup host for water-related activities. There, we indulged in jet-ski, snorkeling, and glass bottom boat ride. Out of all these activities, snorkeling stole the show.

For thirty minutes I kept the fishes company underwater and got to admire colorful corals in the crystal clear water. I was overwhelmed. Meanwhile, my wife was waiting at the beach since she did no go for snorkeling out of fear. But we did get to enjoy some other activities in each other’s company and had a great time.

By 2 pm, we were back to Havelock main island. As we got off on its shore, we came across a beautiful restaurant — Barefoot Bar — crafted out of wood. Its setting was so fascinating that without any further delay we entered it and had a lavish lunch. I was amazed that wherever we ordered the food in Andaman, we were served with a finger-licking surprise. After lunch, we left for our resort.

Suggested Read: His 20 Heavenly Images From Andaman Will Completely Sweep You Off Your Feet

The life of the Orient Legend Beach Resort lied in its private beach. Take 50 steps from the resort and there you are – standing amidst the magic of Andaman, with no one around. Having returned to the hotel, we whiled away some time and got down to the beach in the evening. We walked around, chit-chatted in absolute leisure while the sun went down. And what followed was a dream – bright moon amidst a starry night, water shining like silk and trees looked as if embossed on a gray painting. We got so lost in the whole setting that we could not even keep a track of time. Even when hunger struck, we requested the restaurant people to serve the food
at the beach only. They were courteous enough to comply. It was certainly magical!

Planning your honeymoon in Andaman but confused about what to do? These Andaman honeymoon stories help you find your best honeymoon trip ever!

Day 4: A day at the Neil Island

The next day, we left for Neil Island via Makruzz. The weather had got a little disturbed and as a result, the ferry ride was getting rough. The air-locked atmosphere added to the unease and most people ended up puking. Although Makruzz provided the luxury of the AC, it could not offer a smooth experience. So while returning to Port Blair, we went for the government ferry only, which was much smoother.

The Makruzz led us to the Neil Island, where our driver was waiting to take us around the island and its beaches. We visited 3 major beaches on the island and enjoyed glass bottom boat ride on one. We stopped at the beaches for a very short while, since we had to leave by 3 pm. The Island was very small, but we enjoyed even minute experiences, ranging from the local shopping of coral jewelry to the quiet and scenic drive on its roads. We managed to get back to Port Blair by 6 pm and spent the evening in the local market before returning to the hotel.

Day 5: The end of a beginning

We did not even realize when the last day of the trip arrived. We woke up early morning to see the sunrise and walked barefoot on the shore. Our flight was scheduled in the evening and the rest of the day was free and unplanned. With enough time in hand, I called up my travel agent to schedule something for the day. Taking up his suggestion, we visited the Museum and the sports complex. The museum showcased the marine life and we spent around an hour in the place. At the sports complex, we whiled away time in its park and had our last lunch in Andaman. The cab was waiting all this while with our luggage and we were dropped at the airport an hour before the flight.

Our driver was very courteous and had guided us throughout the trip. And I must mention that the people I met in Andaman were very accommodating and nice. Even the restaurant guys were sweet enough to hand me over my tea while we were busy admiring the sunrise at the beach.

We were glad that we got to experience the distinct weather conditions of Andaman. On one day the weather was sunny, one day it drizzled for a while and on the others, it was windy. But it remained lovable in each form. Having come back, I now believe that Andaman might actually be the best possible place in India for a honeymoon.

Most cherished memory: Personally, I was charmed with snorkeling. I felt I could have stayed underwater for hours! But when it comes to us both, that moon-lit night was simply magical.

Low Point: The hotel stay on the first day in Port Blair could have been better.

Tips for traveling to Andaman:

Looking for your ideal honeymoon destination? Book your honeymoon trip to Andaman!

Pulling The Royal Out Of A Random Weekend: Trip To Jaisalmer

Honeymoon In Chicago: 10 Amazing Ideas To Have The Most Special Time With Your Bae!

22 Best Honeymoon Destinations In Europe In Summer For A Perfect Escape!

Kovalam Beach Resorts: 8 Most Romantic Sojourns For A Blissful Vacation