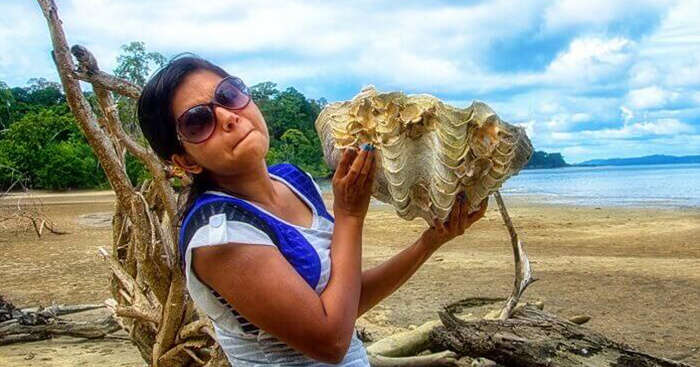 A passionate Chandan Pal undertook a soul stirring journey to the Andaman Islands along with his better half. Booking an Andaman holiday package through TravelTriangle, he secured his accommodation in 4 star hotels, local transfers and tours in private AC cabs, entry tickets/permits and airfare for Rs.87,000. Here, he shares with us his vivid memories of the trip along with his larger-than-life images that will bring the whole trip alive in front of you. Take a look.

Deciding the location for the vacation was easy – my wife picked Andaman and I agreed. The basic requirement was, that we wanted to have an ocean side vacation. Having been to Goa, Pondicherry, Mangalore and other famed beaches many times over, trip to Andaman seemed the only logical option.

While my better half is the adventurous one among us – I indulge in photography, draw cartoons and caricatures, while traveling. i came across TravelTriangle on the internet and was pleased with the quotes I received. Gradually, when the agents turned out reliable, the experience achieved a whole new level of excellence.

We had an early morning flight from Chennai to Port Blair. As the flight closed in on the hundreds of islands we were looking at from the sky, we witnessed the ocean’s color turn florescent green.

On landing at the Andaman airport, we were greeted by the TravelTriangle agent who took us to our hotel, where we had our lunch.

Post-lunch we headed out for the Anthropological museum, which acquainted us with the Andaman’s native inhabitants, their tools, technologies, food and dwellings etc.

The history lessons were furthered on the visit to the Cellular Jail (Kala Pani). The ropes used for hanging freedom fighters or the cells where they spent their last days, were grim reminders of the sacrifice that the nation paid to secure its freedom.

Passing through the narrow winding hilly road and with the beautiful blue ocean on the left – we reached Corbyn’s Cove in the second half of the day. There, we indulged in scuba and took a speedboat ride. Although my wife was thrilled, but as someone with morbid fear of water — I kept screaming all through the ride. We were taken to a small rocky island which was the smallest island in Andaman.

All soaked up due to the water-adventures, we went to the Cellular jail for Sound and Light show in the evening. The show takes one through the history of the jail once known as “the hell on earth”. For dinner, we tried some absolutely delicious seafood at a local restaurant and retired for the night.

Day 2: Living in a dream

The next day we were booked for a cruise to the Red Skin Island. The journey to the island lined with beautiful red corals, took us through breathtaking views of the pristine sea guarded by thick forests.

It is here, where I had my first tryst with Snorkeling in Andaman. We spent an hour snorkeling and saw many forms of ocean cucumbers, corals, colorful sea fishes, held a jelly fish in hand, and even saw a sea snake. It was truly an amazing mix of feelings.

Day 3: Diving in the deep blue

After a 90 minute cruise from Port Blair, we reached Havelock – a paradise replete with white sand beaches, coral reefs, palm trees, as well as dense forests.

At Havelock, we got sea-facing rooms and after a brief rest, we headed for Scuba again. Once again, confronting my fears, I successfully enjoyed scuba diving in Andaman.

Suggested Read: The Most Amazing Instances of Scuba Diving in Andaman Islands

Underwater, we saw a colorful array of aquatic life and even said hello to “Nemo” and his friends. Rich in color and abundant in marine life – the warm water with its splendid clarity was beyond what we had expected. Our lunch break in the afternoon, was followed by our little adventure around the island on a rented bike.

In the evening, we went to Radha Nagar beach – rated as one of the best beaches worldwide, and one could immediately see why. It is one long stretch of clean white sand on one end and lush green Mahua forest on the other end, not to mention the clear water and blue skies ahead.

At Radhanagar Beach, Andaman — we spent a few hours at the ocean complemented with local pakodas in a sea side shop, before calling it a day.

The entire day was spent at the Elephant Beach, in speed boats and snorkeling – since we couldn’t seem to get enough of the adventure. Wondering about the things to do in Andaman in the evening, we rented the bike again and rode miles along the secluded pristine beaches.

We stopped for some time at the Kala Patthar beach, which is one of the most popular Andaman tourist attractions, before resuming our carefree ride along the seashores. For dinner, we had undoubtedly the best sea food at a local restaurant called Anju.

Day 5: Acquainting with the soul of Andaman

On the second-last day, we got up at 4:30 to witness the sunrise and spent a couple of hours on the beach. While on the cruise back to Port Blair, we realized how hard it was to say goodbye to Havelock – where we had woven beautiful memories.

On reaching Port Blair, we spent the evening at Chidiya Tapu. Although Andaman has abundant places that showcase pleasing views of sunrise and sunset, but at Chidiya Tapu – one can see the sun going down in the sea, with the birds chirping in the backdrop.

Day 6: For the love of Andaman

We had an early morning flight but decided to squeeze in one last trip in Andaman and went to the hills overseeing the airport. It was a very unique view with the airstrip on one side and ocean on the other.

High Points: The varied experiences – from being at the cellular jail, to being at the pristine beaches of Havelock Island; from exploring the ocean floor through Scuba and Snorkeling, to holding a Jellyfish in hand – will be cherished forever.

Low points: We should have booked a sea facing resort in Port Blair.

Tip for future travelers: Plan more days in Andaman – the place deserves at least 2 weeks of your time.

To adore the enchanting beauty of Andaman freely, book a trip to Andaman with TravelTriangle.

16 Magnificent Temples In Gujarat For A Divine Holiday In 2022!

Top 32 Romantic Restaurants In Dubai In 2022: Dine Like The Royals!

Our Couple Trip to Manali: An Experience Worth Remembering Post Lockdown In 2021

8 Amazing Tourist Places Near Nandyal That No Traveler Would Want To Miss In 2022!