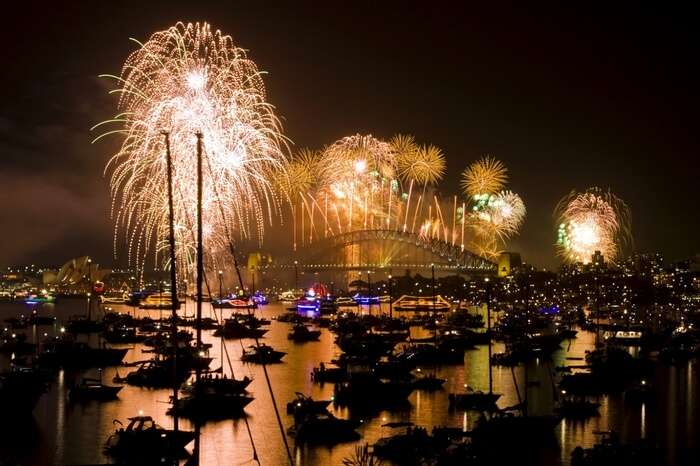 At the stroke of midnight hour on 31st December when the whole world dances, throbs, and welcomes the new year in their own way, Sydney lights up with festivity! Yes, new year celebration in Sydney is one of the most awaited extravaganzas around the globe because of the exciting display of fireworks renowned all over the world.

So, let’s start our list of best new year celebrations in Sydney with the grand firework show at the Sydney Harbour.

What’s so special about the Sydney Harbour fireworks?

A glimpse of the magnificent firework at Sydney Harbour:

Having said that, the Sydney Harbour Firework is now a global event, which is a million dollar gift to the world. The large scale cracker show is a unique experience and certainly, puts it among the top things to do once in a lifetime for many.

But new year celebration in Sydney is not just about fireworks by the Bridge and Opera House, the city has a multitude of happening places full of enticing options that will turn your new year’s eve into a memorable affair.

A huge attraction located in the heart of the city, Royal Botanical Garden is the place to plan your ideal new year’s eve in Sydney. It is spread over 40 hectares and can be explored by going for a heritage walk or taking a nature tour. For new year’s, it has a celebration facility and four vantage points to catch the live display of fireworks. This sparkling magic erupts at 12 am on 1st January. Two of the most thronged places inside the Royal Botanical Garden are:

a. Midnight At The Oasis

b. Lawn With The View

Located in the vicinity of Botanical Gardens, Fort Denison is a former defense facility near the Sydney Harbour. It not only offers the exclusive 360-degree view of the cracker show but also makes for a top tourist attraction in Sydney.

Fort Denison is popular for private party functions and has ample of options to chill with family and friends. Therefore, this secluded haven must be in your itinerary while planning new year celebration in Sydney. Fort Denison Cafe, with its translucent rooftop dining area, makes for a prime attraction.

Highlight: Firing of the 1 pm cannon

If you planning to visit Fort Denison, see details here

Suggested Read: New Year 2021: 10 Best Places In The World To Ring It In & Celebrate

Located between Sydney Harbour Bridge and Balmain, Goat Island in Sydney Harbour National Park is another vantage point that offers an uninterrupted spectacle of the cracker show at Sydney Harbour. The exciting atmosphere and plenty of alcohol will set up a glorious night for you. Bring your family and friends to make the most of the time spent here.

Tip: Carry a torch and a radio to listen to the running commentary of the cracker show.

Located at a distance of one km from Rose Bay, Shark Island is also Sydney’s most popular outdoor wedding venue. But the primary attraction of the island is the awesome view of the new year fireworks.

The lush grass, picnic shelters, and amazing 360-degree views of Sydney Harbour, make Shark Island the perfect place to catch the events on the 31st night from the harbor.

Suggested Read: Ring In 2021 With A Wacky New Year Party In Goa

Besides, the island offers some exciting live performances. The entry fee includes food and alcohol.

The best thing about Bradleys Head is live entertainment and music shows fit for all ages. Also offering an uninterrupted view of the Sydney Harbour and the Opera House, Bradleys Head has an array of dining options and nonalcoholic beverages. Sip on your drink as you watch the crackers show light up the complete harbor area.

An ideal destination for a picnic with friends and family on the new year’s eve, the Nielsen Park boasts of a beautiful skyline, firework viewing area at a distance of 600 m, and an electric atmosphere that has everything to make the new year’s eve a grand event.

Plenty of camping, accommodation, and excursion options make it another prominent place to go for Sydney new year celebrations.

Other popular places to celebrate new year’s eve in Sydney

The UNESCO World Heritage Site is located right amidst the Sydney Harbour and epitomizes Sydney new year’s eve. With options like holiday houses and camping at its disposal, Cockatoo island is the place to be.

While fireworks remain the prime attraction on the island, there are plenty of activities planned for kids, special guided tours for patrons, and an array of delicious food and drinks in the offering. Prepare to groove to the tunes of Metallica, and top remixes from some of the world’s most popular DJs. You can also plan a camping at the island and experience the new year celebration in Sydney like never before!

Darling Harbour is a lively and happening place that boasts of the perfect setup for new year celebration in Sydney. Nightclubs, wine bars, and bistros offering a wide range of food and drinks, and late-night dancing sessions make Darling Harbour a must visit place.

Cargo Bar, Bungalow 8, and The Loft are some of the most swarmed places at the Darling Harbour when the sun finally does down on the 31st night and a big celebration is looming large ahead.

Harbour cruise is another mesmerizing experience which is one of its kind. Cruising into the new year with close buddies amidst the sea, while the entire sky in front opens up to loud crackers and dazzling lights synchronized to music, is truly spellbinding.

Hop on to the exciting cruise and catch the excitement live and exclusive from the deck as you stand hand in hand with your partner, or go berserk with your buddies. Holding a cocktail in your hand, watch the live music performance and behold the moment.

New year celebration in Sydney is a carnival to attend as you head towards the year end!

Q. Where can I celebrate New Years Eve in Sydney?

A. People in Sydney like to party. So, there are a variety of options where you can celebrate New Year in Sydney:
1. Botanical gardens
2. Clarke Quay
3. Sydney Harbour
4. Taronga Zoo
5. Luna Park
6. Park Hyatt
7. Harbour Hoopla

Q. Do trains run in Sydney on New Year’s Eve?

A. Yes, trains run in Sydney of New Year’s Eve. in fact, there are extra trains running on the route to facilitate transportation for the crowd. However, different train stations have different timings. Even the metro and buses are functional from 31st December to the next morning.

Q. Where can I watch the New Year fireworks in Sydney?

A. There are a lot of places where you can watch New Year fireworks in Sydney for free or paid:
1. Royal Botanic Gardens
2. Sydney Harbour
3. Taronga Zoo
4. Sydney Harbour Cruises
5. Barangaroo

Q. Where can I watch fireworks in Sydney for free?

A. If you do not want to shell out money for fireworks, here are a few spots in Sydney where you can enjoy it for free:
Circular Quay

Q. What time are the fireworks in Sydney?

A. The fireworks in some places begin as early as 7 PM and continue till midnight.

Q. Can you see the Sydney fireworks from Darling Harbour?

A. Yes, you can watch the Sydney fireworks from Darling Harbour from 7 PM to midnight. In fact it is a family-friendly and free spot to watch NYE fireworks in Sydney.

50 Of The Most Beautiful Places In India You Have To See In 2021 To Believe!

Skydiving In Sydney Guide: All You Need To Know Before Planning An Excursion

Sydney In December: What To Expect From This Absolute Gem Of Australia

Coronavirus Quarantine: 5 Exciting Things To Do For Vacation-Like Feels At Home

8 Interesting Places For Scuba Diving In Sydney in 2021