For The Love Of Family And Fun: A Trip To Australia 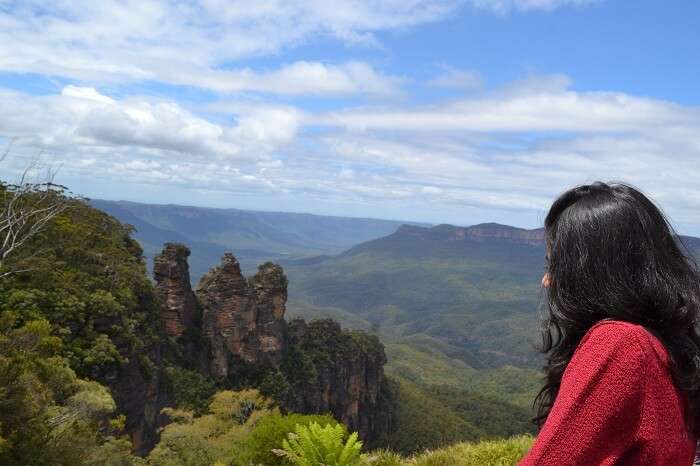 Shyamala Radhakrishna talks about her 9-day trip to Australia with her family. She elaborates on the adventures and fun times spent there. Her trip which was booked via TravelTriangle cost her INR 836,000 and included her flights, transfers, hotels, and local sightseeing. She shares her experience with us and elaborates on how this journey turned out to be the perfect family holiday!


Having traveled to many countries in the past, I wanted to visit a destination that would offer me the best combination of nature, lifestyle, and leisure. After narrowing down on the two places, I finally chose Australia instead of Europe since I was curious about the receding Great Barrier Reef. My family including my husband and two teenage children were equally excited about visiting the great continent and country.

I found TravelTriangle on Google while I was searching for a land and air package for Australia. Finding the whole process of booking a package easy and intuitive, I was soon able to receive multiple calls and quotes from various travel agents associated with the website. I chose the best one from Wanderbird Holidays and was soon sorted when it came to the package.

Booking through TravelTriangle turned out to be a hassle-free experience thanks to their prompt communication and service practices. Unlike other offline travel agencies like Cox & Kings, Thomas Cook, etc where I would have had to follow their schedules and go as per their fixed itinerary – TravelTriangle customized our journey and offered a really good user experience.

Suggested Read: Our Honeymoon Trip to New Zealand And Australia Was The Grandest Of Them All!

We landed in Sydney at around 9:15 PM and were transferred to our hotel by 11 PM. Tired but happy to have finally reached our destination, we settled in and called it a night!

We did the ‘Blue Mountains Trip’ on our second day and it took us almost 1.5 hours from Sydney to reach the place. Since it was Christmas and most of the tour operators were not functioning, we also covered the ‘Featherdale Wildlife Park‘ in the Blue Mountains Trip which was otherwise scheduled for another day.

The wildlife park was a great experience but its highlight was the Skyway. Traveling in a glass floor trolley up the mountains was an awesome experience and every time we looked down, we were thrilled by the beauty and height. Our downhill descent from the mountains was on a train and that too was an exhilarating experience since we were going down the hill at a steep 82-degree angle.

Another good part of this experience was that we could repeat it as many times we wanted. Overall, the Blue Mountains Trip was the scenic adventure we had always hoped for.

Suggested Read: This Indian Woman Set Out On A Solo Journey To Australia And What She Experienced Was Beautiful!

It was time for the Sydney city tour and it started at 7:45 AM and ended at the harbor around 11AM. From there on, we could do whatever we wanted.

The highlights of this day proved to be two things – the first one being the ‘Sydney Overview and Origin’ where we were told about the origins and how it took so much effort to build the city. The guide who was a government official was very knowledgeable and it was fascinating to hear his stories for two hours.

The second highlight was the Opera House Tour. We were told that it would not be functioning since it was Christmas time, but we didn’t give up for we had a ticket. Finally, someone told us that our ticket was a part of the new audio- visual tour program which was a new experiment for the tourists. Meant for a group of 10-12 people, this group program turned out to be a private one, since we were the only ones present. The program showed us how difficult and challenging it was to build the Opera House and also included some interesting points about the place.

We took a flight to Cairns in the morning and reached there by 3:30 PM. This was a small town and in the evening, we relaxed and took a walk in the vicinity.

We visited the Great Barrier Reef on day 5 and were picked up by the drivers from our hotel (Novotel Cairns). The cruise was an amazing experience and we could see the reef from the glass boat (glass flooring). There was an underwater semi-submarine tour also where we were submerged in the water in a glass cabin and could see the fishes and marine life around us.

We were free by 1:30 PM and the day was free for leisure. TWe visited the Green Island in Great Barrier Reef which was also a one-stop destination for all the water and adventure activities like parasailing, snorkeling, etc. My two kids did snorkeling and even went to the point where they could touch the reef. We were free by 5:30 PM and the rest of the evening was spent in the hotel only.

We went to the Kuranda village this day. The village was a few thousand feet above Cairns and the most amazing part of this place was the ‘Skyrail’ and ‘rainforest walks’. Our journey upwards was done in the Skyrail and after every stop in the 5.5 km stretch, we would do a short rainforest walk reminiscent of the Brazilian Forests that I always wanted to visit. Later in the village, we could do whatever we wanted so we used this time to buy some authentic Australian souvenirs.

We took the train while coming back and that too was a scenic and interesting experience. During the journey, we were told about the marvels of railways and how people took so much pain to construct them during the 18th century.

Suggested Read: This Indian Woman Set Out On A Solo Journey To Australia And What She Experienced Was Beautiful!

We checked out of our hotel – The Novotel Cairns and took a flight to Brisbane. From Brisbane, we traveled to Gold Coast (1.5 hrs) and settled into our hotel ‘Mantra by the beach’. It was a good destination and there were many shops and hotels by the beach.

Out of the three major theme parks that are there in Gold Coast, we had booked the ‘Sea World’, although later, I did realize that we should have done the ‘Dream World’ too!

The Sea World Tour took us a whole day and was an amazing experience for all. The place had some wonderful rides and both my family and I enjoyed them a lot. This theme park was a little smaller than the ‘Disneyland in Florida’ and its highlights included the dolphins and some really good roller coasters. The food included in the package was also good and apart from this, we also had the options to do activities like snorkeling, etc.

It was during this visit that I realized we should have also booked the Dreamland for I found out that it had some of the biggest and best coasters in Australia. My children would have enjoyed more there and the journey would have been even better.

The Currumbin Wildlife Sanctuary in the Gold Coast was a great wildlife experience. We were left free with the koalas and the kangaroos and everyone in the family adored the company of the animals. I personally felt the Kangaroos would have looked more majestic, had we seen them in the wild rather than a sanctuary!

Again since it was 1st of January, most of the adventure tours inside the sanctuary like Treetop Challenge etc. were closed. However, we did witness the bird show, which to my delight turned out to be a wonderful experience.

The caretaker there had trained the exotic birds to come out to her as she called their names and do activities as per her command. I was stunned at the level of control she had over them. These birds were also trained to fly above our heads which were again a delight to look at.

I felt that this was the perfect way to conserve the birds, care for them, and also entertain others from it.
The whole trip ended by 2 PM and later we could do whatever we wanted.

We did the hot air balloon ride this day and were picked up by the organizers from our hotel after they were done strategizing which way to take us based on the wind direction. There were 16-18 people in a single balloon and we could witness the amazing landscapes and grasslands of Australia.

On the way back we were also taken to the ‘O’Reilly’s Canungra Valley Vineyard’. This vineyard was surrounded by hills from all sides was a beautiful estate.

Later back on the way, we also saw an interesting movie on a hot air balloon. Back in the hotel, we had time till about 3:40 PM to do whatever we wanted and my daughter and I made the most of it by indulging in shopping!

This was our last day and after checking out of the hotel, we were transferred to the airport for our flight back to India.

Having found the right balance between adventure, fun, and leisure – Australia for us, turned out to be better than expected. I loved its beauty, natural charm, and organization. Everything was perfectly timed and there weren’t any hassles.
Given a chance, we would really want to do this trip again, maybe with an extra day in Sydney and an extra amusement park – Dream World!

Low Points – On our way from Bangkok to Australia, we were not served any food since we had not been asked about it during the ticket bookings.

Explore magnificence and discover unlimited fun with your friends and family when you set out to expore this amazing place Down Under! Plan your holiday in Australia and witness the best of both nature and lifestyle with our customized and comfortable tours!

Casinos In Sydney: Try Your Luck At Some Of These Incredibly Amazing Australian Gamehouses

These Casinos In Australia: 10 Places To Let The Inner Gamer Out

Casinos In Melbourne: 4 Game Houses To Set The Dice Rolling In Australia

Zoo In Adelaide: The Ultimate Guide To This Australian Wildlife Haven