Nightlife In Varanasi: Witness The Glittering Side Of The City After The Sun Sets! 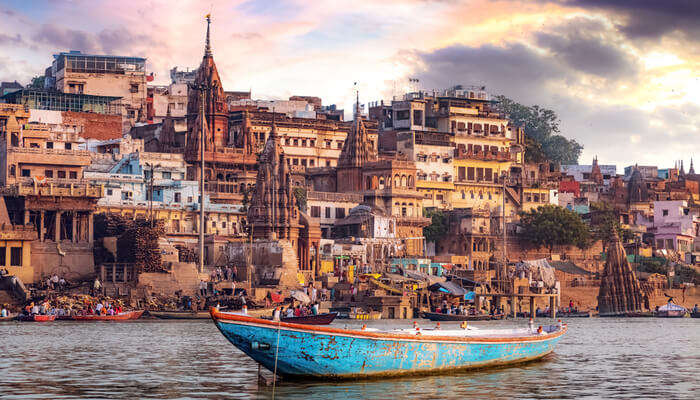 Varanasi is considered a spiritual city in India. A night well spent in Varanasi can be an eccentric experience. Varanasi city is situated on the banks of the River Ganges, Uttar Pradesh, India. It’s also previously called Banaras and renowned for Banarasi silk sarees. It is one of the most ancient cities in India and the findings at Rajghat demonstrate that it was populated in the ninth century B.C. The spot is significant for Hindus, Jains, and Buddhists. It is said that Varanasi city is the home of Ayurveda medication. The nightlife in Varanasi showcases a totally different experience for travelers.

Varanasi is a city that doesn’t sleep, and the reason is diametrically opposite to that which keeps other sleepless cities up. No bars, drunken men or temptresses here; this city is kept up by religious zeal and its Banarasi sari industry.

1. Take A Holistic Trip To The Ganges Ghats

The city of Varanasi is nourished by the Ganges River. This river is believed to be one of the sacred rivers in the country due to its association with the trinity Hindu gods Brahma, Vishnu, and Shiva. The Ganga Ghat is famous for its evening Aarti, which ensues daily. This is truly one mesmeric site wherein visitors gather every night around the Ganga Ghat and offer their prayers to the river. You can enjoy a boat ride in this river with your family and friends.

Must Read: 25 Places To Visit In Varanasi In 2021 For The Best Of Culture, History, & Spirituality

2. Take Divine Blessings In The Temples Of Varanasi

Spare some moments for soul-cleansing, thoughtful moments and bid your prayers at the temples of Varanasi. These temples are so sacred that you can find these temples history mentioned in the sacred Hindu literature. Some of the popular spiritual temples in this city include Vishwanath Temple, Nepali Mandir Temple, and Sarnath Temple.

Shopping in Varanasi and experiencing nightlife in Varanasi is a fantastic thing that you can do in the tiny hours of sunset. Get yourself indulge in beautiful silk saris or ornate jewels, Varanasi has quite a thing to offer. Vishwanath Gali and Chowk are two renowned shopping walkways of the city.

Suggested Read: Choose The Best Travel Insurance In India In 2021 With Our Guide

Delicately designed with elaborate styles, this remarkable mosque overlooks the Ganges. Tale has it that it was built during the rule of Aurangzeb, the last great Mughal ruler after he destroyed the original Vishwanath Temple which was built by Beni Madhur Rao Scindhia in a wave of his pietistic measures to encourage Islam. Overseeing the Panchaganga Ghat, this Mosque was named Alamgir to tribute Aurangzeb.

Ideal for: Group, solo, and couples
Activity cost/ticket fee: No entry fee
Entry timing and closing timings: 07:00 AM to 07:00 PM every day
Location: Panchganga Ghat, Ghasi Tola, Varanasi, Uttar Pradesh 221001
Stay options: Budget hotels at a nearby place.
Apart from the above-mentioned nightlife in Varanasi experience, you can go for top nightclubs in Varanasi.

Ideal for: Solo, group, and couples
Activity cost/ticket fee: Starting from INR 800
Entry timing and closing timings: 11 AM to 10:30 PM
Location: Varanasi
Stay options: Budget hotels at a nearby place.

Further Read: Go Karting In India: A Thrill Ride Awaits At These Exciting Venues Across The Country In 2021

All the places aforementioned make Varanasi, India’s very own Medina, a major place of pilgrimage, which draws swarms of believers throughout the year. Varanasi can be a spiritual experience like no other. This attractive town, which is believed to be the most ancient surviving city of the world is the nucleus of religious tourism in India and draws countless pilgrims from across the country. The nightlife in Varanasi is an experience like no other. Plan your trip to Varanasi and don’t forget to experience the fun after the sun sets!

Q. How far is Kashi from Varanasi?

A. It is about 5 km from Varanasi. It can be traveled by train.

Q. Does Varanasi have a nightlife?

A. Yes, you can experience it in both ways Holistic and in a way, modern people have their weekends nights.

Q. How far it is Ayodhya from Varanasi?

Q. Is Varanasi, the oldest city in the world?

A. Yes, according to Hindu legend, Varanasi is more than 5,000 years old. So, it is considered as the oldest city in the world.

Q. What can we buy in Varanasi?

A. There is a list of beautiful things you can buy from Varanasi. Banarasi silk saree, Crystal, Stone Shivalinga, Gulabi Minakari, Wooden toys, and  Rudraksha Mala being the crowd-pleasers.

Q. Is Ola available in Varanasi?

A. Yes, Ola cab services in Varanasi is so available. The city of temples is one of the holiest cities in India. It is only 25 km away from the city. There are many local cars from the airport.

Q. Which is the best month to visit Varanasi?

A. The best time for Varanasi is during the winter months are November to February. The average low temperature is 5 degrees Celsius.

14 Fancy Cafes In Varanasi One Must Explore To Enjoy A Great Time Sipping A Cup Of Coffee With Friends!

6 Most Happening Nightclubs In Varanasi To Let Your Hair Down In 2021!

6 Best Waterfalls Near Varanasi For A Blissful Vacation