Christ The Redeemer: Visit In 2022 To Know About This Iconic Monument 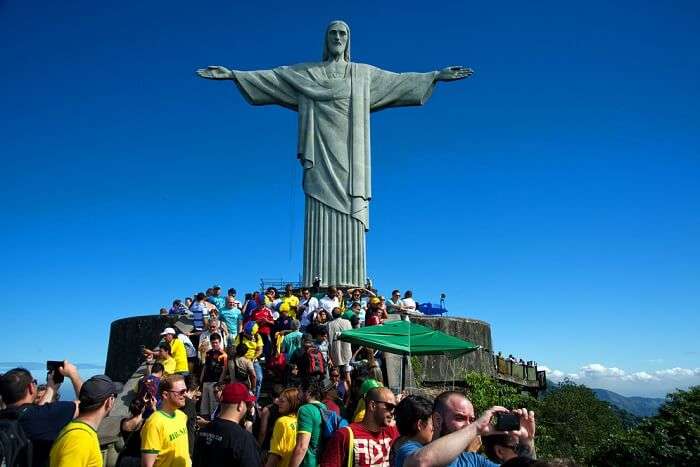 Located on the peak of the Corcovado mountain in the Tijuca National Forest Park in Rio De Janeiro, Brazil, Christ The Redeemer is a 30 meters tall statue of Jesus Christ. This iconic monument was unveiled in 1931 and is listed as one of the seven new wonders of the world. It gives the visitors a spectacular view of the beautiful city and the surrounding landscapes. Boarding the cog train or minibus from Santa Teresa is the easiest way to reach the top of Corcovado that will give you a fair chance to click some beautiful shots from the mountaintop to make your trip memorable.

About Christ The Redeemer

Christ The Redeemer is 30 meters tall, excluding its 26-foot pedestal and the 92 feet outstretched arms. This religious statue weighs approximately 635 tonnes and is considered as an icon of the marvelous city of Rio de Janeiro. It is the fifth largest statue of Jesus Christ in the world. The right arm of the statue points towards south Rio de Janeiro and the left arm points towards north Rio de Janeiro.

Construction Of Christ The Redeemer

Beginning in 1922, Christ the Redeemer took nine years to complete. Constructed from concrete and soapstone, this 5th tallest statue of Jesus in the whole wide world was officially inaugurated on 12th October 1931. The credit for the construction of this statue goes to Heitor da Silva Costa. He was the winner of the contest that was organized for its construction. Paul Landowski further sharpened the design of this attention-grabbing masterpiece. Christ the Redeemer height is 38 m.

History Of Christ The Redeemer

Earlier in the 1850s, a local Catholic priest named Pedro Maria Boss suggested building a religious monument for which the request for financing was denied as Princess Isabel, the princess regent of Brazil was not much impressed by the idea. Later in the early 1920s, a group called the Catholic Circle of Rio launched a petition called Semana do Monumento which became a huge success and that resulted into the construction of this iconic statue of Jesus Christ.

7 Essential Facts About Christ The Redeemer

In 2007, a worldwide poll was conducted to nominate various wonderful man-made structures of the world as wonders of the modern world. Christ the Redeemer statue of Brazil received massive support and was elected as one among the 7 wonders of the world:

1. Christ The Redeemer: Architecture And Design

The initial sketch of this iconic and spectacular monument was entirely different from what we see today. The initial sketch designed by Da Silva Costa depicted Christ carrying a giant cross in one hand and the globe in another one. Although the statue was appreciated by the project’s organizers, very soon it gained a playful name “Christ with a ball” due to which it had to experience a new design ie the one which we see today: arms-wide-open Christ.

2. Christ The Redeemer: The Secret Purpose

Every historical monument has a story behind it, which led to its birth. Christ the Redeemer was born in the year 1920 following the fear of “Godlessness”, in the wake of World War One. After the Brazilian Republic was created in 1889, the church and state were separated as Brazilians saw the statue as a way of reclaiming Rio. To counter the steep downfall of the state, Catholics believed they needed a symbol to reinstate the faith and banish “godlessness”.

It was in the year 1920 when Heitor da Silva Costa was chosen as the engineer for the statue of Christ which later became known as Christ the Redeemer – A magnificent statue overlooking the city, situated in the top of Mount Corcovado. Christ the Redeemer statue stands tall as a universal symbol of peace and love that Jesus Christ preached. The wide arms of the statue symbolize to bring everyone together. It is also a mark of devotion that the local people have towards Jesus.

Christ the Redeemer has withstood nature borne wear and tear over the years. Various restorations have been done in order to maintain the statue in its full glory. This enormous statue was struck by a bolt of powerful lightning in 2008 which caused some damage to the statue’s head, fingers, and eyebrows. Although the lightning was very powerful, thanks to the soapstone insulation, the majority of its power was earthed. The monument witnessed some damages in 2014 as well. In fact, it was very close to the World Cup 2014 when a lightning strike caused damage to the back of the statue’s head and cut off the tip of its finger. Corrective steps were immediately taken to restore the damage.

The humongous structure of the statue required equally strong support which could be achieved by the use of reinforced concrete. The reinforced concrete being one of the very few materials that could provide the required support to the statute for its rugged design was initially the choice. However, Da Silva Costa and others were afraid that the concrete might be rough for Christ’s image and the monument will be a failure.

It was then when Da Silva Costa got inspired by a fountain along Paris’s Champs Elysees. The tiles used for this fountain lined up perfectly to highlight the beautiful curves of the fountain, just like what Da Silva Costa wanted for the statue. The project plans were immediately updated and the architects instead chose soapstone to make tiles. Over 6 million tiles were used for this gigantic Christ statue making it one of a kind. As per the BBC, workers who were involved in the manufacturing frequently wrote on the back making Christ the Redeemer of Brazil a treasure of hidden messages.

The statue of Christ the Redeemer was built using very rare soapstone that is found in the area. It is sparkling white in color and that’s why the statue seems to glow in the moonlight. But over the years the statue’s brightness will diminish due to weather, pollution, and corrosion. Every time a repair work is done, engineers are using a darker shade stone as the original color of the stone is hard to find.

6. Christ The Redeemer: Chapel At The Base

A Chapel was built at the base of the statue to commemorate its 75th anniversary in the year 2006. In fact, anyone can get married at this Chapel. The Chapel is a rather small one and there’s limited space inside. Also in order to go to the top, one has to take a cog train followed by an elevator and finally escalators.

The statue suffered from a sad defacing in the year 2010 which was seen as a “crime against the nation.” When the statue was being renovated, the statue was vandalized by a couple of acrobatic graffiti artists. They wrote all over the statue including head, arms, and chest. While the whole of Rio was shaken from the incident, Rio’s mayor, Eduardo Paes, called the act a “crime against the nation.” The vandals eventually confessed and turned themselves in.

You can visit the beautiful tropical country all throughout the year. But it is advisable to avoid Christmas and local festive seasons as it can get crowded. Opt to go in off seasons or during non-monsoon months. Once you are at the location, don’t miss out on going to the top, it is worth the effort. You can either visit early in the morning or after dusk to get the best view of the city.

The colossal statue of Christ the Redeemer symbolizes the national pride of Brazil. The government has several concerns when it comes to restoration and preservation of the statue. In 2017, the statue was subjected to restoration. The statue is protected from being struck by lightning and the moisture that builds within and destroys the metallic skeleton. Make sure to visit this landmark on your trip to South America.

Why is Christ the Redeemer one of the Seven Wonders?

Christ the Redeemer is one of the seven wonders because it was voted for, to be one of the wonders.

Top 10 Places To Visit Before You Get Married: Let’s Get The Party Started!

10 Gorgeous Places In Pattaya To Explore With Your Sweetheart

15 Best Things To Do In Boston That You Just Can’t Miss!

10 Best Places To Visit In Iceland That Will Leave You Drooling All Over!