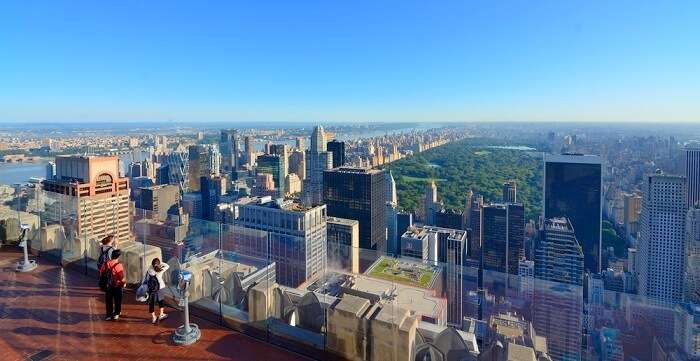 Few cities as are well-known as the Big Apple. Times Square, the Empire State Building and the Guggenheim are just some of the places to visit in New York that embody what the city is all about – culture, art, feats of engineering and a buzzing energy one comes to expect from the City that Never Sleeps.

Travelers who love the rush of being in a big city will find that New York doesn’t disappoint. In fact, it sets the bar for all else! Get ready for the thrill of your lifetime as you explore the best it has to offer. Check out our list of New York attractions to visit the next time you’re in the city.

The Metropolitan Museum of Art or ‘the Met’ as it’s commonly called is the biggest art museum in the US and is among the most famous in the world. Its vast collection of artworks is one of the best things to see in New York. You can also dine at the Great Hall Balcony Café & Bar and The Dining Room at the Met.

Suggested Read: 10 Romantic Places In New York Every Couple Must Visit For A Dreamy Escapade In 2022!

A somber reminder of the September 11th 2001 attacks, the National 9/11 Memorial & Museum at the World Trade Center site is one of the places to see in New York. It tells the story of that fatal day through artifacts, photos, video and interactive materials. You can also see the Survivor Tree, which is a Callery pear tree that withstood the bombing and now serves as a symbol of survival and rebirth.

Must Read: 20 New York Restaurants: The Culinary Capital Of The World (2022)

There’s no better way to see New York in its entirety than by heading to the Top of the Rock, an observatory located in Rockefeller Center. It’s one of the best places to visit in New York city. Along the way, you can see the Mezzanine Exhibit, the Radiance Wall and Breezeway. You can also try the interactive Beam Walk that was set up to honor the unforgettable photograph of construction workers sitting on a steel beam while having lunch.

You can’t plan a trip to New York without visiting the Empire State Building. The beloved cultural icon was once the tallest building in the world and is also considered a wonder owing to the amount of work that went into its construction. Make it part of your New York sightseeing tour and make your way to the observatories to see the city laid out below.

Trace the history of immigration in the US at the Ellis Island Immigration Museum. It tells the tale of the 12 million immigrants who entered the country through Ellis Island through an audio tour, exhibits and an interactive area.
While at Ellis Island, you can’t skip a trip to the iconic Statue of Liberty. It’s one of the most popular places to visit near New York. Reserve tickets months in advance so that you can tour the pedestal and the crown.

One of the largest museums in the world has its home in the Upper West Side of Manhattan. The American Museum of Natural History is the best place to go in New York to see biodiversity and space captured in dioramas, installations, models and videos. Explore the Biodiversity and Environmental Halls, Birds and Reptiles and Amphibians Halls, Earth and Planetary Sciences Halls, Fossil Halls, Mammal Halls, Human Origins and Cultural Halls and the Rose Center for Earth and Space.

Suggested Read: Belvedere Castle In New York Will Be Shut In 2018 & Here’s Why You’ll Need A Plan B!

A short distance away in the Upper East Side is the Guggenheim Museum, an art museum that’s a work of art in itself! It was designed by famed architect Frank Lloyd Wright and its architecture can explored through public tours. The museum has a permanent collection of Impressionist, post-Impressionist, Modern and Contemporary art and features works by the greats like Picasso, Gauguin and Kandinsky. The museum also has an online store where you can buy exclusive archival prints, sculptures, ceramics and more.

Everyone’s heard of Times Square but not many may know that it’s located in Theater District in Midtown West. The area is packed with Broadway theaters, recording studios and restaurants. There are so many terrific New York tourist spots here that it will take days before you can cover them all. Aside from the obvious – catching a Broadway show – you should go on a food tour of the numerous eateries.

Another place of interest in New York that you absolutely can’t skip is the Brooklyn Bridge, an engineering marvel that took 14 years to build and saw as many as two dozen people – including the original designer – die during the process owing to ‘the bends’ and accidents. The majestic bridge continues to carry about 150,000 vehicles and pedestrians every single day. It’s often featured in film and television including in such titles like Limitless, The French Connection and Transformers 2.

An important landmark and a recognizable symbol of Roman Catholicism in New York, St. Patrick’s Cathedral is a beautiful neo-Gothic style structure that can accommodate up to 3,000 people. The magnificent façade features spires that rise up to 330 feet while the pieta is a whopping three times bigger than Michelangelo’s Pietà. Include it in your list of must-see places in New York especially if you love history and architecture.