Paragliding In Spain: 10 Best Places To Explore The Spanish Sky In 2021 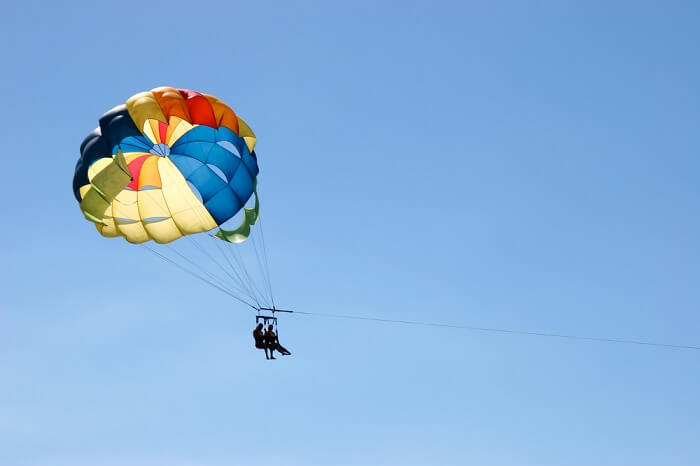 Paragliding in Spain is the one thing that is present in everyone’s bucket list when someone visits Spain alone, with friends or with family. Exploring this beautiful country from high above the sky is an experience of a lifetime. If you haven’t experience paragliding ever, don’t worry. Spain offers paragliding for beginner to experts with different locations to fly over with. Be that may beautiful mountains, historical places, country places, sea beach, towns, planes, and whatnot.

Ideal Time Of The Year For Paragliding In Spain

10 Best Places For Paragliding In Spain

Paragliding is a way through which a person can experience flying in the sky like a bird. It is full of fun, adventure. So when you visit Spain these are the 10 best places where you can go for paragliding:

Alicante is one of the ideal places for paragliding. In the presence of the thermal air, in the midst of breathtaking mountains of Alicante along with a picturesque spectacle of the Mediterranean Sea, you can experience the amazing feeling of flying like a bird in the sky.

The climate and weather condition of Alicante is perfect for paragliding throughout the year.
Places, where you can go for tandem paragliding in Alicante, are Agost and Santa Pola. The takeoff height is around 850 m above sea level.

Andalucía in Spain is also acknowledged as Mecca for air sports. It is one of the ideal places in Spain to get your feet off the ground and cruise into the sky in a paraglide. Andalucia offers you a vast range of geography to fly over. If you wish to cruise over the sea, the Atlantic beaches of Tarifa in Cadiz is the place for you to go. If you want to glide like an eagle over a jungle then Grazalema Natural Park is the venue you should go. Another one is Sierra Nevada Mountains which gives you a chance to paraglide over spectacular snow-covered hills under a bright blue sky.

Takeoff height may go as high as up to 2000m. As Andalucía is in the southern side of Sierra Nevada Mountain you can come and paraglide throughout the year.

La Muela is located in central Spain. Paragliding in Spain in the sky of La Muela with a picturesque view of the sunset is an experience of a lifetime. The plateaus of La Muela offer a takeoff height of 250 m. You can experience thermal flight and XC paragliding here. It is a place to just stay in the sky, play with the wind and enjoy the sunset.

La Lastra del Cano is the place where paragliding records are made and broken. Three times the European record has been accomplished here. When you are up in the sky you will see beautiful mountains covered with pine trees and Tormes River flowing through the valleys. The most ideal time to glide is either early morning or in the evening. During the daytime, conditions are too harsh for paragliding usually. One more thing, when you are up in the sky, vultures that nests on the ledges of the mountain will surely come to accompany you.

Suggested Read: 17 Most Beautiful Cities In Spain: Get Spellbound By Them On A Trip In 2021

Mallorca is a beautiful island in Spain situated in the Mediterranean Sea. 400 m above the ground enjoying the stunning view of the island along with the sea is just breathtaking. You can either go for gentle tandem paragliding in Spain or acrobat tandem flight to experience some breathtaking acrobats in the air. In Mallorca, you will fly over Llucmajor coast enjoying the stunning view of the Mediterranean.

Organya is just the right place for all intensities of paragliding. Organya is located in the beautiful Pyrenees Mountains. If you are searching for the best place in Europe to practice acrobatic flying, then Organya is the place for you. The high winds are blocked by the mountain creating a condition ideal for attaining flying height quickly. In Organya the mountain landscape is stunning and flying high in the sky you can have a bird’s eye view of Peak Orri, Cadi and Pedraforca.

If you are in Barcelona for a Barcelona FC match then after or before the match you can visit Barga which is located just north of Barcelona. The weather here is mild throughout the year. It doesn’t matter if you are a novice or an expert, Berga is just ideal for both. In Berga, you will also find a very welcoming flying community. The best time to visit Berga for paragliding is during the spring or autumn season. In summer Berga gets a little windy this is not ideal for paragliding.

One thing is guaranteed in Ager that is sunshine. With consistent conditions for flying Ager is the home of cross-country paragliding. With the Pyrenees in the background, you can experience the scenic beauty of Ager while flying like a bird. Ager offers you the bird’s eye view of lakes, valleys, plains, and rocky lands. You may also be accompanied by vultures which itself is an experience of a lifetime.

If you need to feel your adrenaline rush then just fly over Teide National Park. It offers you the highest takeoff spot in Spain which is 2,200 meters high. Surely it will be a breathtaking experience jumping from that height and touching the ground. You can glide over the picturesque gorge of La Orotava and the beautiful town of Puerto de la Cruz. The most ideal time to come to Teide National Park for paragliding is in the summer season that is from April to October.

Piedrahita is one the best paragliding sites in the world. A number of flying competition takes place here. Piedrahita offers you a perfect combination of plains and mountains. The climate in Piedrahita is perfect for high altitude flying. Piedrahita is an attraction for paragliding experts for cross-country flights as well as for beginners who just want to fly low.

So, if you are planning to visit Spain don’t forget to give it a go-to paragliding and feel your adrenaline rush. Paragliding in Spain prices varies from place to place. So choose the right place according to your budget and tick mark paragliding in Spain on your bucket list. Pack your bags, take a flight to Spain and get your feet off the ground and glide over the beautiful country Spain.

Q. Is paragliding in Spain safe?

A. If one follows the rules and instructions and is flying with qualified instructors, then paragliding in Spain is safe.

Q. Where can I go paragliding in Spain?

A. Some of the places to paraglide in Spain are:
1. Alicante
2. Mallorca
3. Teide National Park

Q. Can you paraglide in the rain in Spain?

A. It is advised not to paraglide in the rain.

Q. Which is the famous place in Spain for paragliding?

A. Andalucia is one of the famous places in Spain for paragliding.

Q. How far can you go when you take a high flight in Spain?

A. You can go as far as 18000 feet when you take a high flight. These flights last for many hours and are suitable only for experienced riders.

Q. What if you book a paragliding course in Spain and the weather is bad?

A. If you book a course in Spain and the weather is bad, a few companies might either refund or might find an alternative way for you to complete the course of compensating it with ground training and exams.

Q. What is the minimum age to fly solo in Spain?

A. After the training is complete the minimum age to fly solo in Spain is 14 years of age. To fly tandem below the age of 18 parental consent is needed. There is no upper limit for age. As long as you are fit and have no medical condition you can fly tandem if you are above 18 years of age. Always make sure you have adventure insurance before you train and go for paragliding.

Q. Where is the highest take-off flight available in Spain?

A. Visit Teide National Park that offers high flights at an altitude of 2200 meters. April to October are the best months to paraglide in Spain.

Q. Which place is a Mecca for paragliding in Spain?

A. Andalucia is the best place to paraglide in Spain as it glides over a wide range of terrains that gives stunning views of the landscapes, sky, mountains, forests, sea, and valleys. You can fly as high as 2000 meters at this place.

Q. Which months are best for paragliding in Spain?

A. The months between March and September are the most ideal for paragliding in Spain. The sky is clear in these months and there is a good wind that can let you take high flights at an altitude of as high as 5000 meters if you are an experienced glider.

Explore Saputara In Summer For An Unforgettable Experience On Your Next Vacay!

27 Amazing Places To Visit In Bikaner: A Trip Through The Cultural Heritage In 2021!

47 Most Amazing Things To Do In Andaman In 2021 That Travelers Cannot Miss!

16 Things To Do On Honeymoon In 2021: Travel Tips And How To Make It Special