7 Trending Places To Visit In Tumkur That Will Be Huge In 2021! 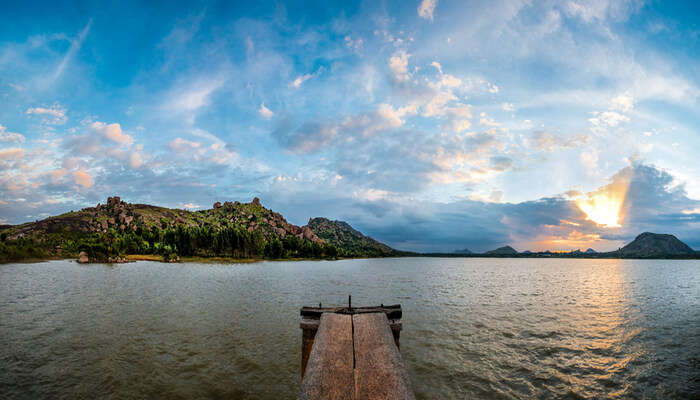 The district of Tumkur lies in the foothills of Devarayadurga Hill. Located 70 kilometers away from Bangalore, which is known as the IT hub of India, Tumkur is often ignored by tourists traveling to Karnataka for a weekend retreat. Though not very popular as a tourist hotspot, the places to visit in Tumkur are recently gaining traction, thanks to their scenic beauty.

Top 7 Places To Visit In Tumkur

We have shortlisted 7 places to visit in Tumkur that are the picture perfect stops to witness the best of the city and experience Karnataka’s cultural scene:

The fort was built by Chikka Devaraja Wadiyar , the 14th king of the Wadiyar dynasty of Mysore, in the 17th century. The fort also led to the name Devarayanadurga, which means “fort of Devaraja”. Not much is left of it now, but the place called for a brief stop. There are no food stalls on the way, so carry ample food and water. You can also preplan your trip to the fort to catch the setting sun.

How to reach: Drive straight from Siddaganga Hale Mata to Devarayanadurga. The approximate distance between them is around 14.4 km.

Must Read: 8 Hill Stations Near Tumkur For An Enchanting Vacation In 2021 With Your Pals!

Namada Chilume is considered as the starting point of the famous Jayamangali river. It is a perennial natural spring that has a rich historical significance. It gushes out of a massive hole in a dark dreary rock. As per the legend, Lord Ram, on his journey to Lanka to rescue Sita, rested near Namada Chilume for one night. The next morning, when he wanted to make a vermilion paste for his forehead, he shot an arrow into the rock, and a spring burst open. This is why Namada Chilume translates to “small spring for forehead paste” in English.

How to reach: Namada Chilume is on the way to Devarayanadurga from Tumkur. Several buses ply on this route.

Devarayanadurga State Forest is at an altitude high enough to prompt you to get lots of woollens. It is a forty two square kilometre designated spread of jungle. The forest has been protected by Karnataka since 1853. The highest point is at 3,940 feet. The forest has a tantalizing variety of wildlife, which includes langurs, chitals, wild boars, leopards, and tigers. The tigers usually remain elusive.

How to reach: The nearest railway station is Tumkur Railway Station at a distance of 15 km.

Suggested Read: 8 Best Adventure Activities In Karnataka That Will Sweep You Off Your Feet

The temple, which is devoted to Mahima Garuda Ranganatha, is on Bangalore-Tumkur Road. You can reach it via Dobbspet. Located on a tiny hilltop, it can be reached after 300 steps of climbing. The village’s name is also Mahimapura, which can also be reached from either Mahimapura Cross near Dobbspet or Neelamangala. Garuda’s idol is located near garbhagruha’s entrance.

How to reach: Travel on NH4 on the Bangalore-Tumkur Road and take a right turn on Mahimapura Cross before Dobbspet and reach Mahimapura.

Suggested Read: Shopping In Karnataka: Pamper Yourself And Shop At These 10 Spots In The State!

Shivaganga Hills are considered sacred by the locals of Tumkur. According to the ancient books like, Vishnupurana and Brahmavaivartha Purana, Lord Sri Vishnu donned several avataras to teach his disciples important life lessons. Apart from his 10 incarnations, he also appeared in several forms like Hayagriva, Venkateshwara, Ranganathaswamy, or Varadaraja. Make sure to wear comfortable trekking shoes.

How to reach: The nearest airport is the Kempegowda International Airport in Bangalore, at a distance of about 76 km. From there, visitors can take a bus to Dabaspet and then hire an auto to reach Shivaganga.

A somewhat exhausting trek by means of a lofty bending street, rough landscape and steps prompted another sanctuary, Bhoga Narasimha is every aesthete’s joy. From here, you get an all encompassing perspective on the slopes and valleys. There are a bunch of rough slopes encompassed by woods, with ancient temples in close proximity. We suggest that you take your fitness levels into account before embarking on this strenuous trek.

How to reach: Take the deviation from Dobbespet on Bangalore Tumkur Road.

Suggested Read: 10 Festivals In Karnataka That Will Give You A Glimpse Into Its Vibrant Culture In 2021

It is a sanctuary devoted to Yoganarasimha Swamy — a part man, part-lion symbol of Lord Vishnu. The sanctuary is known to have existed from the time of the Cholas. It has excellent columns and carvings and a huge circumambulatory entry encompassing the inward sanctum. We suggest you cover your legs and shoulders before entering the temple premises to respect the sanctity of the temple.

How to reach: The nearest railway station is 25 km away in Dobbespet.

Further Read: 12 Stunning Places To Visit In Summer In Karnataka For A Relaxing Retreat In 2021

The places to visit in Tumkur are slowly becoming popular with backpackers from across India. It is a fine spot to visit for nature lovers and history aficionados. As mentioned above, there are several temples in the region that are dedicated to Vishnu, Shiva and other Indian gods. From a pilgrim to a nature enthusiast, there is something for everybody at Tumkur. Book a trip to Tumkur with TravelTriangle today to avail exciting deals and discounts.

Frequently Asked Questions About Places To Visit In Tumkur

Q. Is Tumkur a religious center for Hindus?

A. Yes, Tumkur has many religious places that one can visit like the Bhoga Narasimha Temple, Yoga Narasimha Swamy Temple, and more.

Q. What are some of the places in Tumkur beyond the temples?

Q, What is Tumkur famous for?

A. Tumkur is famous for being home to Shree Siddaganga Mutt, for being an industrial city and for the many great temples it is home to.

Q. Where is Tumkur located?

A. Tumkur is situated in Karnataka. It is situated at a distance of 71 kilometers from Bangalore. Also, this place is governed by the municipal corporation.

Q. How can one reach Tumkur?

A. Travelers can take both flights as well as use road transport facilities to travel to Tumkur from Bangalore. The air route would be good and fast so its better to travel to the destination by air.

Q. Are there any hills in the city of Tumkur?

A. Yes, the district of Tumkur has several hills that catch the attention of the people over there. The most popular ones are the Shivaganga hills in Tumkur, which is among the most visited place over there.

Q. Is Tumkur a developed city?

A. Yes, Tumkur is a very well developed place that has a lot of growing industries so there are various other developments taking place in the city. It is, therefore, a smart city in present-day terminology.

These 14 Waterfalls Near Trivandrum Take Away The Breath Of Spectators, Just Like That In 2021!