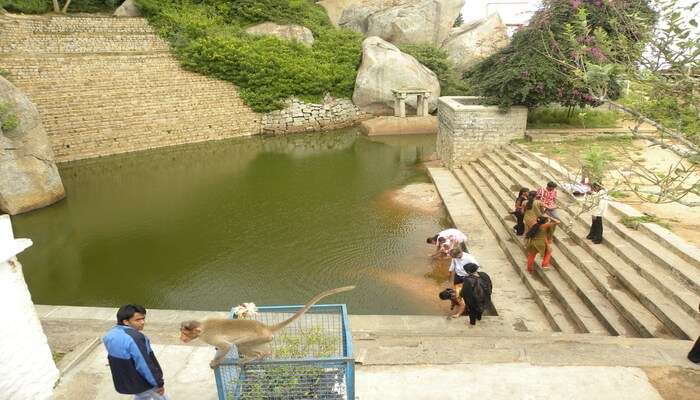 Tumkur is slowly emerging as a popular tourist destinations, thanks to its scenic beauty and cultural and historical gems. No one in Karnataka could have envisioned the rise of this industrial city as a famous hotspot among couples, nature lovers, and history aficionados. There are several things to do in Tumkur for travelers of all kinds throughout the year. Let’s take some of these things into account.

Top 7 Things To Do In Tumkur

From a visit to world-class temples and inviting hills to pigging out at inviting roadside cafes, these 7 things to do in Tumkur will confirm Karnataka’s seductive charms

It is a sanctuary devoted to Yoganarasimha Swamy — a part man, part-lion symbol of Lord Vishnu. The sanctuary is known to have existed from the time of the Cholas. It has excellent columns and carvings and a huge circumambulatory entry encompassing the inward sanctum. We suggest you cover your legs and shoulders before entering the temple premises to respect the sanctity of the temple.

How to reach: The nearest railway station is 25 km away in Dobbespet.

2. Bhoga Narasimha Temple – Pray For Others

A somewhat exhausting trek by means of a lofty bending street, rough landscape and steps prompted another sanctuary, Bhoga Narasimha is every aesthete’s joy. From here, you get an all encompassing perspective on the slopes and valleys. There are a bunch of rough slopes encompassed by woods, with ancient temples in close proximity. We suggest that you take your fitness levels into account before embarking on this strenuous trek.

How to reach: Take the deviation from Dobbespet on Bangalore Tumkur Road.

Shivaganga Hills are considered sacred by the locals of Tumkur. According to the ancient books like, Vishnupurana and Brahmavaivartha Purana, Lord Sri Vishnu donned several avataras to teach his disciples important life lessons. Apart from his 10 incarnations, he also appeared in several forms like Hayagriva, Venkateshwara, Ranganathaswamy, or Varadaraja. Make sure to wear comfortable trekking shoes.

How to reach: The nearest airport is the Kempegowda International Airport in Bangalore, at a distance of about 76 km. From there, visitors can take a bus to Dabaspet and then hire an auto to reach Shivaganga.

The temple, which is devoted to Mahima Garuda Ranganatha, is on Bangalore-Tumkur Road. You can reach it via Dobbspet. Located on a tiny hilltop, it can be reached after 300 steps of climbing. The village’s name is also Mahimapura, which can also be reached from either Mahimapura Cross near Dobbspet or Neelamangala. Garuda’s idol is located near garbhagruha’s entrance.

How to reach: Travel on NH4 on the Bangalore-Tumkur Road and take a right turn on Mahimapura Cross before Dobbspet and reach Mahimapura.

Suggested Read: 14 Itineraries Including Best Honeymoon Places In & Around Karnataka In 2022

Devarayanadurga State Forest is at an altitude high enough to prompt you to get lots of woollens. It is a forty two square kilometre designated spread of jungle. The forest has been protected by Karnataka since 1853. The highest point is at 3,940 feet. The forest has a tantalizing variety of wildlife, which includes langurs, chitals, wild boars, leopards, and tigers. The tigers usually remain elusive.

How to reach: The nearest railway station is Tumkur Railway Station at a distance of 15 km.

Namada Chilume is considered as the starting point of the famous Jayamangali river. It is a perennial natural spring that has a rich historical significance. It gushes out of a massive hole in a dark dreary rock. As per the legend, Lord Ram, on his journey to Lanka to rescue Sita, rested near Namada Chilume for one night. The next morning, when he wanted to make a vermilion paste for his forehead, he shot an arrow into the rock, and a spring burst open. This is why Namada Chilume translates to “small spring for forehead paste” in English.

How to reach: Namada Chilume is on the way to Devarayanadurga from Tumkur. Several buses ply on this route.

The fort was built by Chikka Devaraja Wadiyar , the 14th king of the Wadiyar dynasty of Mysore, in the 17th century. The fort also led to the name Devarayanadurga, which means “fort of Devaraja”. Not much is left of it now, but the place called for a brief stop. There are no food stalls on the way, so carry ample food and water. You can also preplan your trip to the fort to catch the setting sun.

How to reach: Drive straight from Siddaganga Hale Mata to Devarayanadurga. The approximate distance between them is around 14.4 km.

Further Read: 20 Temples In Karnataka That Are All About Grandeur That You Must Visit In 2022

There are several things to do in Tumkur that will make your trip to Tumkur city worth it. For instance, the Lakshmikanthaswamy Temple, Sidhaganga, and Shivaganga are some of the places of religious importance that are worth seeing. Though these attractions are not very renowned, they’re gaining traction steadily. We believe they will surely become the next trending things this year.

Frequently Asked Questions About Things To Do In Tumkur

What is there to do in Tumkur?

There are a lot of things to do in Tumkur which includes exploring the temples, going on a drive to witness the beauty of nature at places like Shivaganga hills and Devarayanadurga State Forest. Apart from that also explore some offbeat places like Namada Chilume.

What is there to do in Tumkur for 2 days?

For the people who plan to visit Tumkur for 2 days can enjoy the sights of ancient temples like Mahima Garuda Ranganatha Temple, Bhoga Narasimha temple and Yoganarasimha Swamy temple.

What is Tumkur famous for?

Tumkur is known for places like Sree Siddaganga mutt which is located 5 km toward HITECH city flyover.

Is Tumkur a smart city?

Tumkur is considered as one of the cities which has witnessed high investment and growth due to the industries which are emerging due to the advent of industries.

How far is Tumkur from Bangalore?

Which is the biggest Taluk in Tumkur district?

Gubbi is the biggest Taluk in Tumkur district which has a total population of 256,413.

What is the population in Tumkur?

Tumkur is the city which is governed by the Municipal Corporation and is located at the Karnataka state. The total population in this city is around 3.06 lakhs as recorded by 2011.

What are some of the best things to do in Tumkur?

Some of the famous things to do in Tumkur for the people to visit like the various temples, Shivganaga hills. You get to see the beauty of nature on one side and the highly developed city on the other side.

The place Tumkur is famous for a Mutt named Sree Siddaganga. This mutt is situated near the hi-tech city of the flyover.

As far as the price is considered then the place Tumkur can be said to be slightly costly as compared to some of the northern states.

How is the weather in Tumkur?

The weather condition in Tumkur is neither very hot nor cold. However, you will feel the humidity as it is common in the southern states of India.

What is the average temperature of the place Tumkur?

The average temperature of Tumkur is around 19 degrees Celsius. This means that the weather is not hot but the percentage of the humidity is approximately 95% in the air.

Has Tumkur got the status of being one of the smart cities?

There have been some really big and good investments in Tumkur city that has given rise to several industries and so it has developed a lot. This makes it a smart city.

Is there any forest in Tumkur?

Yes, you will get to see the beauty of the forest in the city of Tumkur. There is Devarayanadurga state forest in Tumkur which attracts all the tourists over there.

10 Fantastic Things To Do In Czechia For Exploring The Magnificent Country!

10 Amazing Things To Do In Cyprus You Cannot Miss Out On!

Shopping In Luxembourg: 10 Best Places Where The Shopaholics Can Go On A Market Spree!

10 Best Things To Do In Denmark Which Will Let You Experience The Best Of This Winterland!

10 Must Things To Do In Luxembourg And Explore The Best Of This Medieval European City!