Bhutan In June: A Must Read Guide Before You Visit This Charismatic Nation 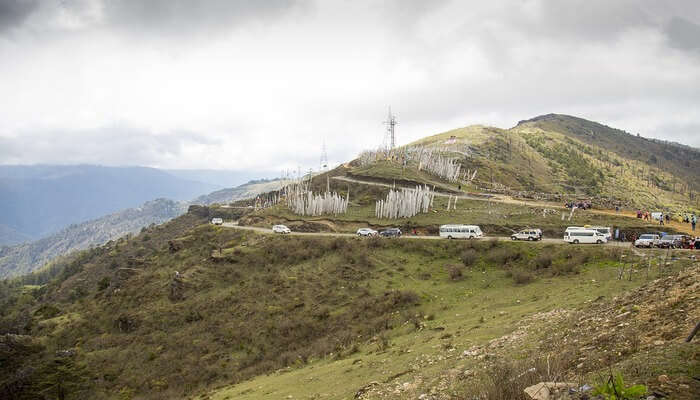 Bhutan, officially known as ‘The Kingdom of Bhutan’ lies cozily between the Himalayan ranges and brims with untamed beauty. This Buddhist nation lures travellers with its ancient monasteries and dzongs built amidst placid valleys in the Himalayas, passes that make up for challenging trekking trails. June is an extension of the peak season in Bhutan when crowds are thin, fares are low and the weather is still welcoming.

Therefore, you have plenty of things to look forward to exploring Bhutan in June. Let’s dive ahead and see if you have all your questions answered in this piece!

Weather In Bhutan In June

June marks the onset of monsoon in Bhutan. Rainfall in the first half of June is usually moderate and gets incessant with strong winds as the month proceeds. It is actually only the southern and eastern parts of Bhutan that actually receive rainfall in June; while the northern and eastern parts of Bhutan receive very little rainfall. Also, it usually rains in the latter part of the day and so, tourists still have enough time to enjoy sightseeing in the mornings and noons.

Why Visit Bhutan In June?

What better ways can a traveller get to experience the celebrations, lifestyle, and culture of Bhutan than during its festivals? The Buddhist Kingdom of Bhutan get livelier and vibrant with a number of festivals and events happening in June like:

Sakteng Festival: This 3 day festival celebrated by the native Brokpas people is the best time to witness the rare dance performances of Bhutan like Yak Dance and the Ache Lhamo.

Nimalung Festival: This festival is a celebration of Guru Rinpoche and is popular in Nimalung Dratshang, Chummi, Bumthang Dzongkhag. The highlight of the festival is the mask dance performed by the lamas.

Trelda Tshechu: Trelda Tshechu marks the celebration of the birth of Guru Rinpoche and during this festival, various religious and meditation rituals are held. On this day, the huge thongdrel of the Guru Rinpoche is unfurled along the wall of the monastery.

Kurjey Tsechu: This is one of the most celebrated festivals in Choekhor Valley of Bumthang, and the people of Jakar and Kurjey villages pay their obeisance to Guru Rinpoche on this day. The celebration on this day includes the Guru Tshengye and Shinjay cham performed by the monks of Kurjey Lhakhang. The celebrations come to an end with the unfurling of the thongdrel.

Bhutan In June: 5 Most Enthralling Places To Visit

If you need more reasons to visit Bhutan in June? June is an off-season in Bhutan which means you get cheaper airfares and accommodations:

Located at a height of about 2280 metres above sea level, this fertile piece of the valley is popular for the iconic Tiger’s nest or the Taktsang in Bhutan. Trekkers are the main tourists of this place in June as many ascending trekking trails get bustling during this season. Monasteries dot this city and in the early part of the day, you can comfortably accommodate sightseeing to these places.

Must Read: 10 Invigorating Adventure Sports In Bhutan You Must Try In 2021

Thimphu is the capital and largest city of Bhutan and is a perfect mix of heritage and modernity. Home to some of the ancient monasteries and Dzongs, the city also looks modern with cafes and bars. No matter, if you are planning for a sightseeing trip on a sunny day or a laid back day enjoying the luxuries of your hotel room on a rainy day, Thimphu has it all.

Suggested Read: Visit These 25 Tourist Places In Bhutan In 2021 To Change Your Worldview

This cozy little town located at the foothills of the Bumthang Valley looks stunning with tree draped mountain ranges and the monasteries at this town create a strong spiritual aura. The weather here until late June is inviting for sightseeing and activities like trekking and mountain biking.

Bumthang translates to “Beautiful Field”. The Bumthang Valley looks serene and the ancient Buddhist monasteries found in the valley are considered highly reverential. Bumthang Valley is a paradise for trekking through the Himalayan countrysides of the country and soaking in the virgin beauty of the high-altitude destinations.

Located at a height of 1,214 meters, Punakaha lies at a lower elevation than cities like Jakar, Paro, and Bumthang and hence, it is relatively wetter than these places. From the start of June until Mid, Punakha has 16 clear days on average which makes sightseeing easily accommodating. The terraced fields with rice and buckwheat are grown in the valley and they look delightfully verdant during this time of the year.

3 Most Enticing Things To Do in Bhutan in June

This is one of the most challenging treks in the world that takes you to daunting altitudes of 5100 metres above sea level. Spanning for about a month, the Snowman Trek takes the trekkers through magnificent Himalayan Valleys, challenging passes, and unexplained remoteness through changing weather conditions. Only a very few endure this close to death trek and go on to enjoy the ethereal views and soul-stirring experiences!

One of the most alluring and secluded high-altitude treks in Bhutan, the Dagala Thousand Lakes Trek takes you through many surreal glacial lakes perched amidst mountains and meadows, wild alpine flowers, and rustic Bhutanese villages. The trekking trail takes you through some of the rich birdlife areas of Bhutan and will make you fall in love with Bhutan!

Perched amidst a serene and placid environment where the prayer wheels spin around spiritual vibes, Kyichu Lhakhang is an ancient temple that has looks extravagant with wooden floors embellished with various precious gems. Visit this monastery in June when the surroundings look so fresh in a riot of green shades.

Started imagining yourself unwinding in the monasteries looking at the drizzles outside or trekking through the rugged landscapes of Bhutan? Come on, let us give your imagination a solid form. Book your Bhutan trip today and enjoy a great time holidaying in this Himalayan Kingdom. While vacationing in Bhutan in June, do not forget to share your lovely experience with TravelTriangle!

Further Read: 10 Things To Buy In Bhutan On A Vacation

What should I pack for the Bhutan trip in June?

The climate of Bhutan in June is warm with moderate rainfall. Hence, lightweight, thin woolens, full-sleeved cotton clothing, raincoat, umbrella, sunscreen lotion, sunglasses, and hats, identity proof, first-aid box, and mosquito repellents are a few basic things that every traveller should carry for the Bhutan trip in June.

Are there enough ATMs in Bhutan cities?

No, it is highly advisable to carry enough cash in hand during the entire Bhutan trip.

Is it advisable to go on a trip to Bhutan in June?

Yes, absolutely. June experiences only pre-monsoon showers in the first part of the month and the rains gain momentum only in the latter half. So, there is still plenty of time during the day to enjoy trekking and sightseeing. Also, Bhutan looks refreshingly lush green which makes it a wanderlust’s dream destination.

Is it true that Indian currency can be used in Bhutan?

How long does the Dagala Lakes Trek take?

What are the timings of Taktsang Palphug Monastery at Paro?

What are some must-buy souvenirs from Bhutan?

Bhutan has an amazing collection of hand-made products like bags, wall hangings, and wooden bowls (dappa). You can also buy gold and silver jewelry, and Himalayan Beads as souvenirs.

What is the distance between Thimphu and Paro?

Thimphu and Paro are 50.7 km away and it takes a little more than an hour to cover the distance by car.

Iceland In June Rome In June Salzburg In June