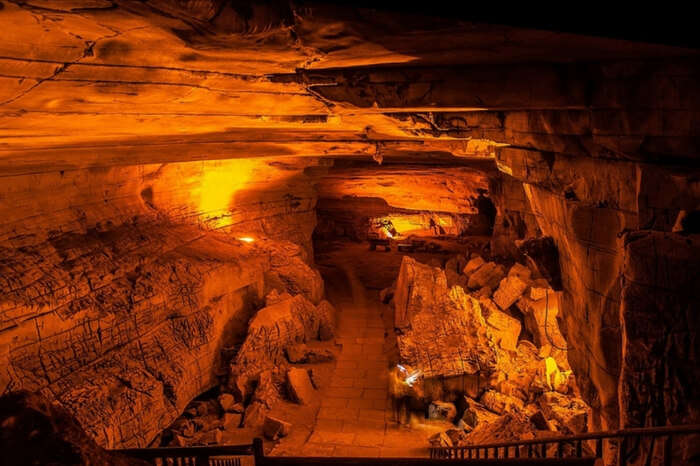 India- the land of glorious spectacles and rich diversities has been a globetrotter’s delight from time unknown. There are wonders that have been glorified by travelers and then there are lesser heard wonders of India that still lie veiled in far-fetched places. These quaint wonders are a treat to the eyes and carry great historical relevance with them.

Plan a trip to these 10 unbelievable wonders of India and brace yourself for pleasant surprises. As much as you are going to love the particularities of these places and picture perfect nature around, the list will also be a litmus test of your geographical knowledge.

Image Source
The secret tunnels of Talatal Ghar are located in the enchanting environs of Sibsagar – a quiet town situated in the Upper Assam region. Once used as an army base, the tunnel was built and skillfully used by Ahom Kings of Assam as a secret hideout. Among all the monuments built by the Ahoms, Talatal Ghar stands as the largest and the most prominent structure.

The rustic structure comprises of seven floors and two secret tunnels. It also has three underground floors that are now restricted for visitors. The tunnels were primarily used as exit points during battle and emergency situations. If you are traveling to Assam, Talatal Ghar is an attraction that mustn’t be missed.

Also known as Bong Bong Fall, Nuranang Waterfall in the Tawang region of Arunachal Pradesh is a prized attraction for wanderers traveling to the Northeast. Another of lesser heard wonders of India, it is at a distance 2 km from Jang town of Arunachal Pradesh and approximately 40 km from Tawang. The fall cascades from an altitude of 100 meters to make its way into the deep valley amid woods. It takes shape just before Nuranang river meets Tawang river.

It was only after the release of the popular Bollywood movie Koyla in the 90s that this location shot to fame. The sound of free falling water, the thin mist in the air, and an enchanting natural spectacle around make Nuranang Waterfall a must-visit. The power station at the base of the waterfall serves as the power source in the Jang village.

Must Read: 31 Reasons Why You Should Never Visit Northeast India

The Dzukou Valley, also known as ‘The Valley of Flowers of the Northeast’ is located close to the border of Manipur and Nagaland. It experiences temperate climate throughout the year, however June to September is the best time to visit. This is the season when the valley is covered in seamless stretches of flowers like Lilies, Euphorbias, and Rhododendrons.

At an altitude of 2138 meters behind Japfu Hills, the Dzukou Valley is a trekker’s paradise. Adventurers look at this marvel of nature as an exciting trail to take treks and bird watching trails. The enchanting sight Dzukou and Japfu rivers intersecting each other in the valley make for a bewitching sight.

Indians must have an inner line permit to visit Nagaland. It can be obtained from Nagaland House in Guwahati, Dimapur, or Kolkata.

At the edge of the mountains lie the ruins of Rabdentse palace, the capital of Sikkim kings. Surrounded by dense forests, ponds, and snow-clad Kanchenjunga ranges, the erstwhile capital of Chogyal kingdom in the 17th century is another lost beauty in the West Sikkim region and a must visit wonder in the Northeast India.

Palace and monastery complex being the prime attraction of the ruins are decked up with wonderful nature around. Flourishing colony around the palace area, the beautiful chestnut trees with dripping mosses and a stone throne, Namphogang (from where judges gave their judgment) make the spectacle of the palace truly enchanting. Right next to it lies ‘Dab Lhagang’, another place of attraction from where royal family worshiped the deities.

5. Garden of Caves, Meghalaya – Of the legendary Garden of Eden

Garden of Caves also known as Ka Bri Ki Synrang by the locals is a nature’s wonder lying nestled in the lush greenery, cascading waterfall, and the tranquilizing environs of Laitmawsiang in Sohra in the East Khasi region of Meghalaya. The hidden beauty located downhills is well nurtured by tranquility that keeps visitors spellbound for hours. Bamboo bridge, along with rocky way wrapped underneath vines makes for amazing spectacle for the travelers.

One can easily spot wide varieties of flora and fauna, numerous waterfalls (14 precisely), and freshwater pond – all in one place. Located at a distance of 10 km from Laitryngew region near Laitmawsiang village, Garden of Caves is the perfect sojourn for nature enthusiasts.

Suggested Read: The Ever Growing Living Root Bridges, Meghalaya – A Nature’s Marvel In The Northeast

East Khasi region in Meghalaya is full of surprises for nature lovers. Laitlum Canyon located in the heart of Meghalaya enchants visitors with untarnished natural beauty epitomized by deep gorges, serpentine staircases that are as scary as they look, and breathtaking view of the canyon. Laitlum, which translates to ‘end of hills’ is the place to be if you want to get a bird’s eye view of the beautiful Shillong city.

The exciting trails located in the undiscovered and distant mountains make for exciting treks for adventure enthusiasts. Hills of the Laitlum Canyon are painted with different hues of red, green, and rust, and are rightly called ‘Amphitheatre of Meghalaya’. Go around and explore the nature with your friends at the trekker’s paradise.

It is advisable to reach the canyon early in the morning because as the day proceeds the layer of fog grows thicker at the hill. Catch the glorious view of Lwai falls on your way back from the trek.

Maluti, a cluster of 108 temples in a radius of 350 meters located in Dumka district near Jharkhand-Bengal border is another lesser known place that is a must-visit for wanderlusts. The rustic charm of medieval architecture and miniature depiction is a class apart and distinguishes the place from other contemporary structures.

The temples showcase war scenes between Rama and Ravana and the life story of Krishna and goddess Durga in terracotta panels. Carvings of soldiers wielding swords and guns while riding on horsebacks clearly show the advent of East India Company in the Indian land. If you are a history buff, Maluti is an interesting destination for you.

Brown is the world as you head inside the mystique Belum Caves located in the Kurnool district of Andhra Pradesh. The dark yet fascinating interiors of the longest caves in the plains of India are a unique blend of adventure, science, and history.

The name Belum is inspired from the word Bilum, which means hole. It refers to the vent that was formed due to continuously flowing water on limestone deposits for a very long time. A walk into these galleries and sinkholes reveals the level of intricacy of these streamlined patterns.

The fact that Jain and Buddhist monks occupied these caves centuries ago makes it a popular religious destination. Many Buddhist relics, now kept at Anantapur Museum, were found in these caves. Also, this wonder of India is one of its kind as it has undergone massive geographical changes that are absolutely intriguing.

Don’t forget to spot a mysterious stream that appears deep inside the caves. The underground waterfall appears 150 feet below the ground level and then disappears into the earth. It is also popular as Patalganga.

Must Read: 15 Spectacular Caves In India That Should Be Explored At Least Once In A Lifetime

This (in the picture above) is the group of waterfalls cascading from rocks that make Hogenakkal waterfalls an enchanting spectacle for the onlookers. Located on Kaveri river in Dharmapuri district of Tamil Nadu, it is also known as ‘the Niagara of India’. It is certainly one of the captivating allures of nature hidden in the heart of Tamil Nadu.

Carbonatite rocks found at the waterfall site are one of the oldest rocks in the world and one of their kind. The waterfalls’ impact on the rock makes it look like a cloud of smoke from a distance. It is indeed a visual treat for visitors!

It goes down and rises again, that’s the charm of the partially submerged 150-year-old rustic beauty near Shettihalli in Karnataka. The church is another relatively lesser known wonder of India that lies close to popular South Indian cities like Mysore, Hassan, and Bangalore. Built by the banks of Hemavathi River, the magnificent structure beams with rustic charm and is a beauty to behold.

An absolute delight for heritage lovers, the church lying in ruins remains submerged in water for most time of the year because of the water released by Gorur Dam which floods the Hemavathi Reservoir and hence the church. The defiant structure stands tall after sustaining the annual wrath of nature for almost one and a half centuries. A perfect place to capture the stunning view of the sunrise or sunset, the Settihalli Church must be on your bucket list.

Tip: April is the month when the church is not submerged inside water, precisely the time when locals carry out prayers by illuminating the church with lamps. Visit the church in April; there are plenty of camping options by the church during this time!

Mesmerized and spellbound, aren’t you? So, plan a trip to these lesser wonders this year and tick off a few from your checklist for 2021.

Go Paragliding In Khajjiar For A Thrilling Weekend Retreat In 2022