Holi In Udaipur 2021: A Royal Affair For All Those Who Love The Festival Of Colors! 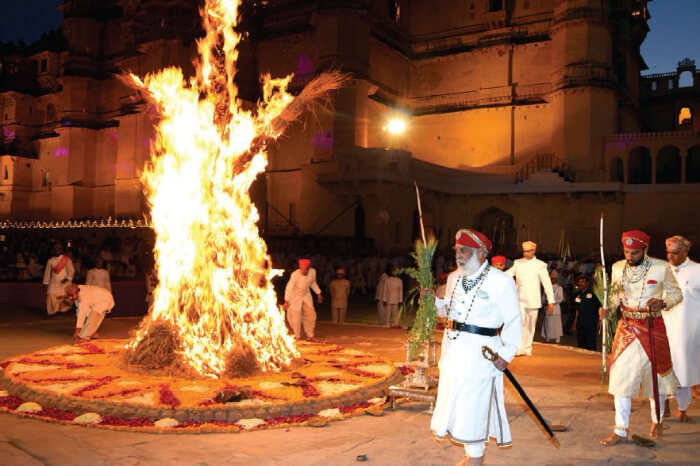 Holi celebrations in Udaipur, Rajasthan is no less than Mathura and Vrindavan. In Udaipur, the festival is celebrated in the most imperial and grand manner, where the royal family takes active participation in all functions and rituals. From Holika Dahan, fireworks to spraying colors, Holi celebration in Udaipur is an enchanting and exuberant experience. Here are some glimpses, if you are planning holiday in Udaipur, this year.

Holi, the festival of colors, is one of the most rejoiced and vibrant festivals of India. On the full moon day of Phalgun (March), entire India, celebrate Holi with absolute zeal and fervour, to welcome the beautiful spring season. People wear white clothes, youngsters take blessings from elders and throw Gulal and wet colours through jet sprays and water guns and water balloons on each other, in merriment.

Several traditional sweets like gujiya and matthi and beverages like thandai and bhang are prepared in households. Mythologically it is believed that, holi is celebrated to mark the victory of Prince Prahlad- emblem of good, over Holika which symbolises bad or devil. On the eve of Holi, people celebrate Holika Dahan. Huge bonfires are set up and people dance and sing around the same, to rejoice the triumph of good over bad.

Must Read: 10 Awesome Places To Celebrate Holi In India In 2021

How Is Holi Celebrated In Udaipur?

Udaipur is famed for most amazing and royal holi celebrations, not only in Rajasthan, but also in the country. Holi is celebrated in Udaipur for two days. The holi celebration in Udaipur starts with Holika Dahan, one day before holi. Known as Mewar Holika Dahan; the bonfire takes place on the grounds of City Palace. The ruling Mewar king and his family, grace the occasion, by lighting the holi pyre, while the locals perform ‘Gair’- a folk dance, around the bonfire. The king personally meets all royal guest, VIPs and dignitaries, who have been invited for the celebration by the royal Mewar family.

Holika dahan in Udaipur is followed by a large and vibrant rally, accompanied by royal family members, sitting on ornated camels, elephants and horses. A music band also plays in the rally. This royal procession starts from Shambhu Niwas Palace and moves up to Manek Chowk royal residence. Finally, the cocktail and dinner are served at the royal palace and the celebration ends with magnificent fireworks. On the second day, locals and tourists rejoice holi throughout the city. In several parts of old Udaipur, local people play with dry and wet colours, water guns and balloons. Buckets full of coloured water are thrown at anyone and everyone, walking by. Households prepare traditional sweets and local people dance and sing folk songs to rejoice the merriment. Even, every hotel and resorts in Udaipur, arranges for holi celebrations with live DJ, colours and refreshments.

Suggested Read: Celebrations Of Holi In Mathura And Vrindavan 2021

Holi festival in Udaipur is celebrated throughout the city. Though royal and best of the celebrations are seen in and around City Palace and Manek Chowk, but the narrow lanes and local markets of old Udaipur do not lag behind in rejoicing this festival of colours.

Further Read: 15 Famous Festivals Of India To Bring Your Life Into A State Of Exuberance

Already excited? Don’t wait anymore, get start packing as Holi in Udaipur is an entirely unique and fascinating experience. Whether you’re an Indian or a foreigner who loves Indian festival, you must plan a trip to Udaipur with TravelTriangle right away and celebrate Holi like never before!