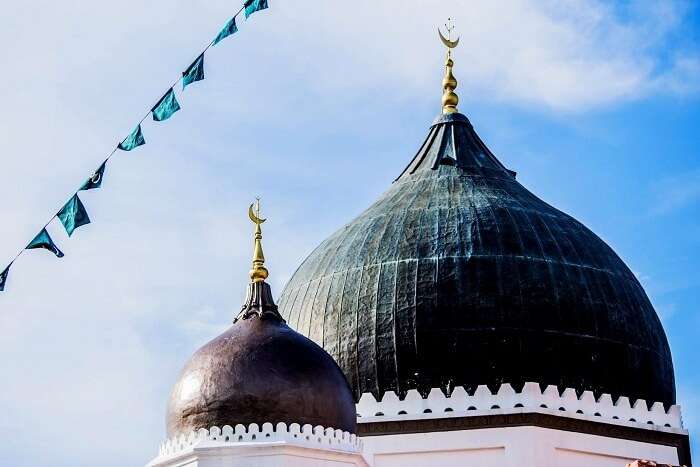 A land of breathtaking mountains, serpentine roads, and gorgeous meadows, Nepal is also a home to some of the best mosques and temples. The mosques in Nepal bear testimony to fine design patterns, stunning architecture, and excellent miniature work. So, if you are planning a tour to Nepal anytime soon, do not forget to visit these fascinating and outstanding mosques in Nepal.

These mosques in Nepal not only boast immensely of mesmerizing structure, but also feature beautiful Islamic decor that are a pure visual treat.

Suggested Read: 10 Ancient Nepal Temples In The Serenity Of The Himalayas

Madatiya Mosque is one of the beautiful mosques in Nepal. Intricately designed with engraved mihrabs, the square chambers, the mosque halls, the central courtyard, and the crowned domes are all carved to perfection that look absolutely stunning and add to the architectural splendor of the mosque. And those who seek peace, can surely find it at this magnificently built mosque of Nepal.

Conveniently located in the Durbar Marg, Kashmiri Masjid Kathmandu Nepal top the list of mosques in Nepal.This beautiful mosque of Nepal is intricately designed and comprises of domes and a marble-paved court in the middle. The adjoining balcony offered beautiful views of the surroundings and on the front road.

Masjid-e-Bilal is a classical Indian mosque, located near Nowhatta in Srinagar. Featuring an enclosed courtyard, the mosque also displays beautiful structures wooden pillars, and a well manicured garden that surrounds the entire mosque. It is also one of the most popular mosque in Pokhara, Nepal.

Jame Masjid’s walls may not look the most beautiful monument but tells you a lot about the the surviving architectures in the region. It is indeed a historical gem tucked away in the heart of Nepal. The whole of the city is so beautiful and peaceful where a long walk around the Nepal Jame Masjid mosque with views of valleys and birds chirping around makes it a must visit place.

It is an Islamic place of worship located in Gorkha, Nepal. It is of huge significance as it is one of the oldest mosque built in nepal. It can hold over 200 people. It has separate areas for the males and females and five times a day, the azan is repeated beautifully, over the loudspeakers.

Nepal is a beautiful country and these mosques in Nepal truly are an epitome of craftsmanship that depict architectural proficiency. And to witness the most of it, book one of the customizable Nepal tour packages, and let TravelTriangle plan a trip for you!