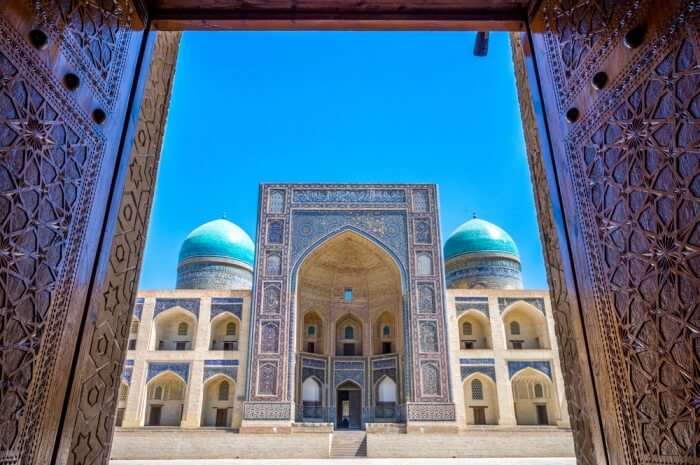 The current showstopper of world tourism, Uzbekistan- which was almost absent in the tourist map until 2011 – has become a trending destination. The bloody history of the Silk Road, and the cultural assortment of ancient cities have contributed to the budding tourism in Uzbekistan. In the year 2017, Uzbekistan witnessed an influx of 3 million tourists, ranking it 76th in the world in absolute terms. Ever since the Arab Spring, tourists have shown a greater interest in the history, culture and architecture of Uzbekistan. If you are planning a classic tour, make sure to scale these trending places to visit in Uzbekistan for an impressive experience.

10 Trending Places To Visit In Uzbekistan

Steeped in rich cultural history, Uzbekistan offers a vivid window for tourists to capture amazing glimpses of its eccentric attractions, architectural wonders and rugged terrains. From the futuristic city of Samarkand to the sprawling city of Tashkent – Uzbekistan holds the potential to be the topmost destination for your next holiday. While you are here or planning a visit to explore Uzbekistan, check out the list of the 10 best places to visit in Uzbekistan: 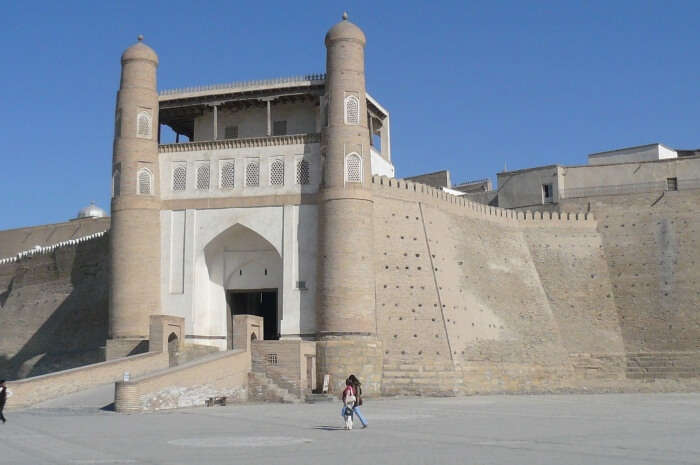 Image Source
Boasting one royal town inside another town, the impressive Ark is Bukhara’s oldest structure till date. Ark, Bukhara, also the residence of the emir of Bukhara for many centuries, remained occupied from the 5th century to the early 20th century. Although the structure was bombed by the Red Army in 1920, it still reflects the royalty of the past. Plan a visit to the ruins to witness the remaining royal quarters now converted into museums.

Must Read: E-Visa To Uzbekistan Will Soon Be Valid For 51 Countries Including India! 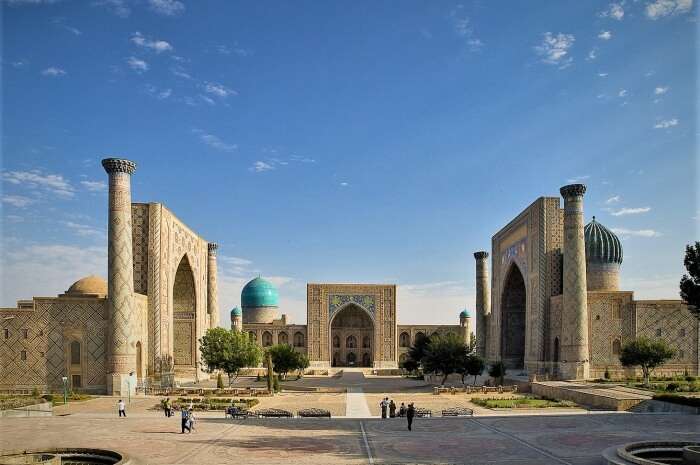 Image Source
Equipped with majolica, mosaics, and well-proportioned spaces, Registan is a vast, cambering medressas occupy the heart of Samarkand. Undoubtedly one of the most stunning sights in Central Asia, Registan makes up for three magnificent edifices which were constructed as per the Islamic architecture. Although destroyed by Chinggis Khan, it still boasts the world’s oldest preserved medressas and holds pride in being one of the major Uzbekistan tourist attractions. Visit anytime in the day for a stunning glimpse. 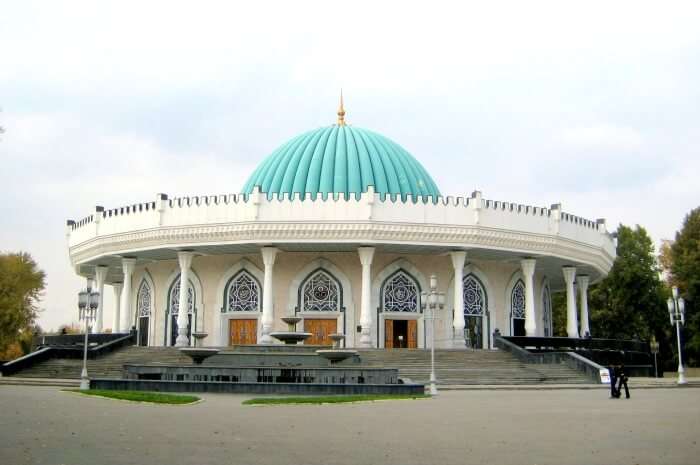 Image Source
Named after the Mongol emperor, Timur, the Amir Timur Museum in Tashkent is home to more than 5,000 exhibits of heirloom which represent the culture and history of the Timurid Dynasty. Only in the year 1996, it was inaugurated in the capital of Uzbekistan, Tashkent. An interesting fact about the Museum is that it is deliberately constructed to replicate the Gur-e Amir mausoleum in Samarkand. And no one knows why!

4. The Walled City of Khiva 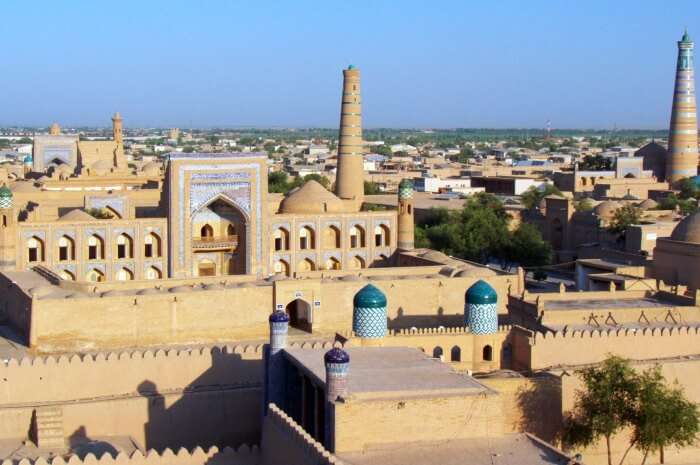 Image Source
Often known as Khorasam, Kiva is an ancient city which is 2,000 years old. Protected by the crenellated brick walls, Kiva is abundant in amazing places and monuments. UNESCO named the walled inner city – Itchan Kala- as the first Uzbek World Heritage Site. It is suggested to spend a night in Khiva because the old town offers some marvelous views of sunsets and sunrises.

Suggested Read: Uzbekistan Visa For Indians: Everything You Need To Know And Remember! 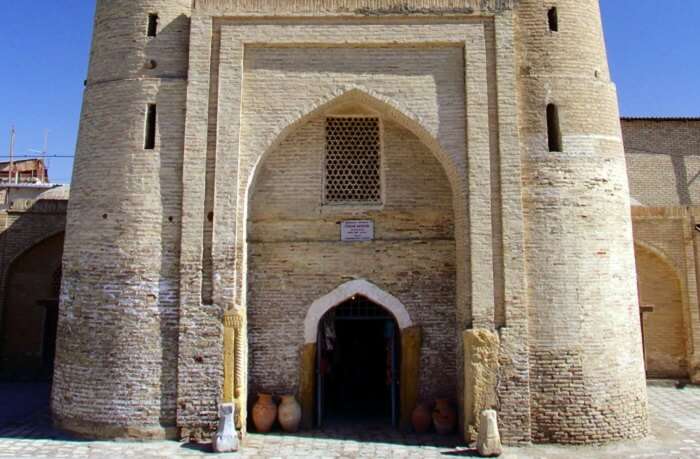 Located in the northeast of Bukhara, Chor Minar was constructed in the 18th century. A rich merchant, Khalif Niyazkul, is accredited for its construction. True to its meaning, “four minarets”, Chor Minor is a long-standing symbol of the four cardinal points of geography. Do not miss out on the strikingly unique decorations in the Minor as you get to explore more of Chor Minor which is also one of the impressive places to see in Uzbekistan. 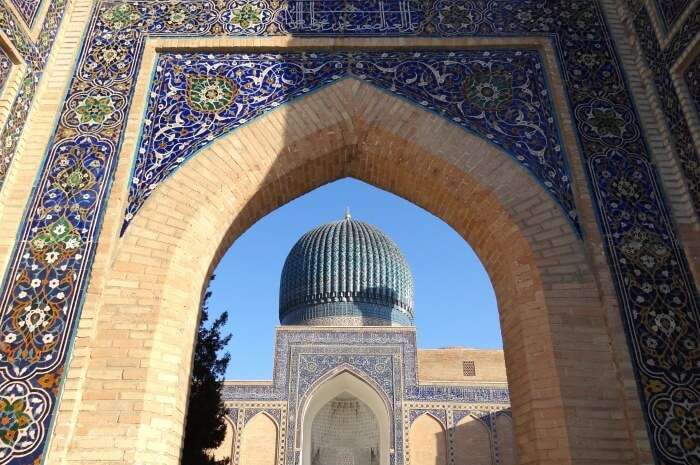 Image Source
Mausoleum of the 14th-century Mongol conqueror, Timur, Gur-e-Amir is an ancient structure remarkable for its beautiful azure dome constructed in the shape of a flute. The dome holds special importance because Timur and his sons and grandsons were cremated here. A visit during night enhances the beauty of the dome manifold. 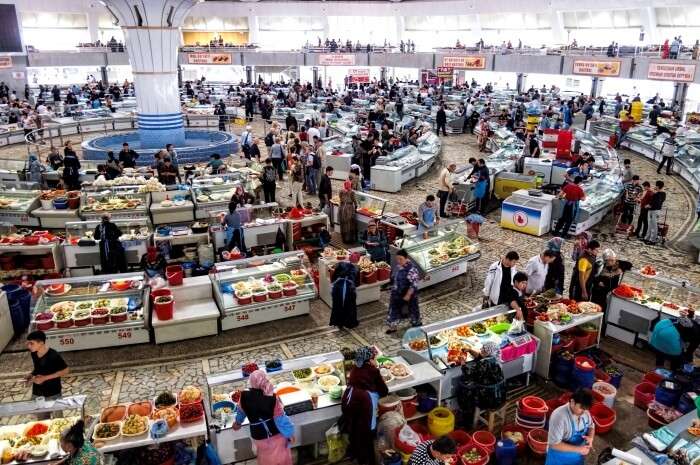 Situated in the centre of Tashkent, Chorsu Bazaar is a blue-domed building which is famous for its traditional market. From clothes to trinkets – the bazaar offers a host of articles for tourists and locals, equally. Make sure to visit the Kukeldash Madrasah which is present at the end of the bazaar which is definitely one of the top places to visit in Uzbekistan.

Suggested Read: Uzbekistan Nightlife: Explore The 10 Most Vibrant And Exciting Nightlife Spots In 2022 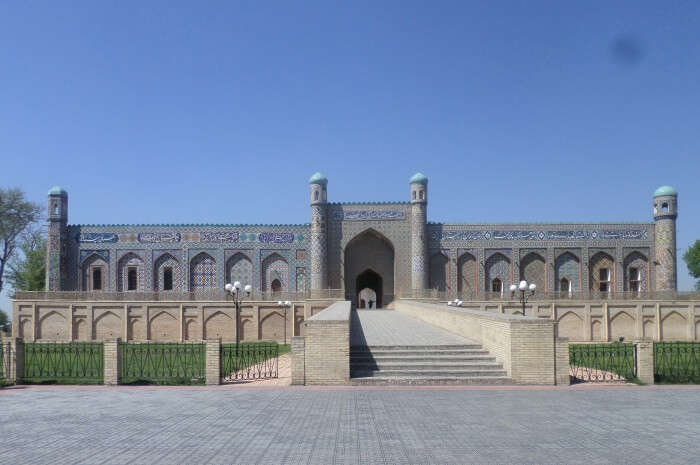 Named after Khudayar Khan, the last ruler of Kokand Khanate, the Palace was once housed seven magnificent courtyards and 119 rooms. It was built in the year 1871 and occupied four acres of green land. Also known as ‘the Pearl of Kokand,’ it is now left with only two courtyards and 19 rooms which are open for public visits. 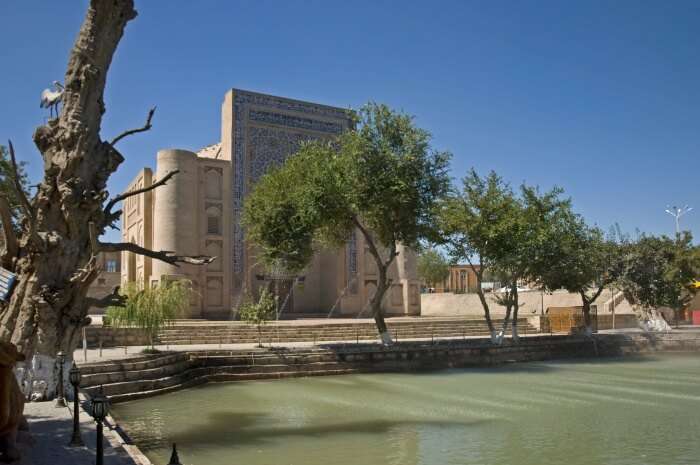 Lyab-i Hauz, built in the early 17th century, stands as one of the few remaining ponds in Bukhara. It is quiet plaza which is surrounded by tall mulberry trees and watered by an ancient canal. There is a historic city of Jewish Quarter located towards the south of Lyab-i-Hauz which definitely demands attention as one of the nicest places to visit in Uzbekistan. 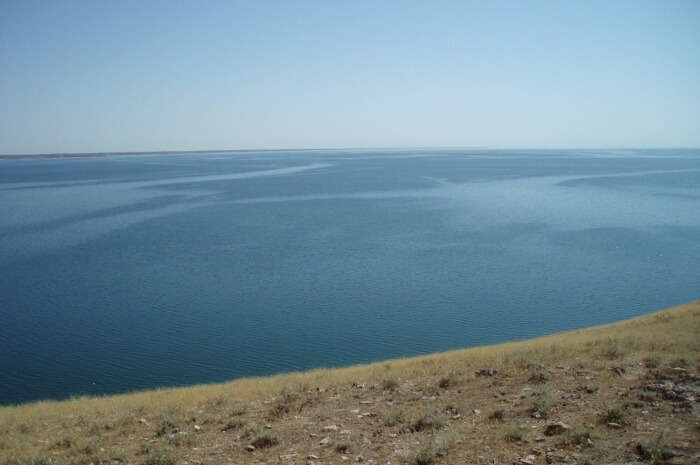 Image Source
Created by the Soviets, Aydarkul Lake is a semi-natural lake which covers more than 4,000 sq kms in the present time. It is located near a smaller seasonal lake amidst the Kyzylkum desert. This place is not only a tourist attraction but also offers a few things to do during vacation.

Further Read: 10 Ancient Museums In Uzbekistan For An Exciting Historical Tour In 2022

While these are some of the most trending and remarkable places to visit in Uzbekistan, there are many others which demand less or similar attention. Once you are in Uzbekistan, hit out the streets and alleyways to discover the mysterious Silk Road and many more. If you haven’t planned yet, make haste and reserve your Uzebkistan vacation with TravelTriangle for an even more memorable experience.

Frequently Asked Questions About Places To Visit In Uzbekistan

What Uzbekistan is famous for?

Uzbekistan is famous for its amazing Islamic architecture in the form of mosques and mausoleum some of them belong to the 17th century. History and culture of this place have attracted a lot of tourists in recent times.

Is Uzbekistan safe to visit?

Traveling to Uzbekistan is absolutely safe and has a very relaxed atmosphere even for solo travelers who often find their solo trip quite rewarding.

What is the best time to visit Uzbekistan?

April to May and September to November is the best time of the year to visit Uzbekistan. During this time you can enjoy the warm and dry climate which is quite pleasant and does not get uncomfortable.

What should I wear in Uzbekistan?

There is no particular dress code to follow in Uzbekistan but the conservative dressing is very much appreciated. Long pants and skirts along with long sleeves shirts are the most preferred dress code for both men and women.

Can you drink alcohol in Uzbekistan?

Alcohol is a part of the culture and day to day life for most people of Uzbekistan. So you are free to drink alcohol and can find them being served in most of the restaurants and hotels.

Uzbekistan enjoys a continental climate with hot summers and cold winters. The temperature in summers reaches up to 40℃ and in winters drops to -2℃.

What is there to do in Uzbekistan?

Some of the fun things to do in Uzbekistan are:
1. Explore Uzbekistan’s History at Gur-e-Amir
2. Enjoy sightseeing at Sher Dor Madrasa
3. Check Out Mosques And Madrasas at Registan
4. Shop For Handicrafts in Tashkent
5. Dig into the most delicious Pilau at Plov Center

What can I buy in Uzbekistan?