8 Uzbekistan Famous Landmarks That Will Make You Time Travel! 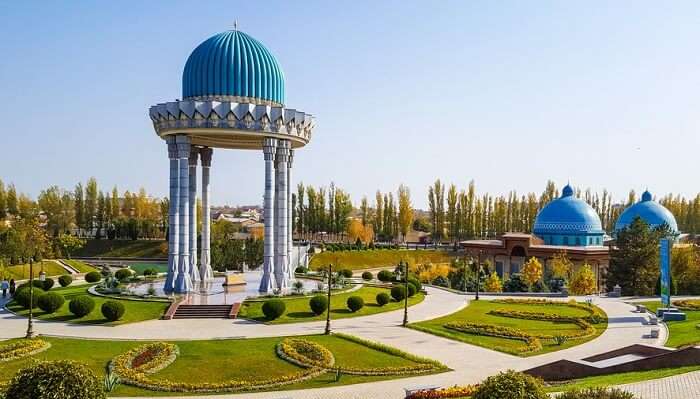 Uzbekistan is one of the biggest countries in Asia. Located in central Asia, the country is landlocked but has a deep history and culture like all other Asian countries. It is one of the world’s only two doubly landlocked countries. The country has variety in its culture because of its ruling under various rulers who were Muslims, Russians and finally Uzbeks. The country today has an official language of Uzbek. With its deep history, modern marvels and well maintained historic sites, Uzbekistan famous landmarks attract a lot of tourists from across the world.

Uzbekistan famous landmarks are a true example of pure historic beauty depicting the existence from prehistoric to medieval times. Here is a list of some of the most splendid landmarks in the country.

The country of Uzbekistan consists of numerous prehistoric evidence that acts as natural landmarks of the country today. These caves are still being explored by historians and other scientists till date. One of the most interesting caves in the country is the Boj-Bulok cave, which has been excavated up to a depth of 1,415 m and is on the verge of becoming the deepest cave in the world after the discovery of additional cave passages. Other important caves in the country include Anghilak cave, Obi-Rakhmat cave, and Teshik-Tash cave.

There are various sites throughout the country that are filled with ancient burials, petroglyphs, and various altars throughout Uzbekistan. These attract a lot of people, especially those interested in history and the existence of mankind since the early ages. Some important petroglyph sites in the country are Sarmishay and Siypantosh Rock Paintings.
These form the best Uzbekistan natural landmarks that you must visit on your expedition to the country.

Must Read: 8 Smart Uzbekistan Travel Tips To Help You Make The Most Of Your Trip!

Since the early ages, the world has witnessed the formation of many civilizations coming up throughout the globe. Uzbekistan, today consists of some of the oldest formed cities of the world, that is today abandoned and are maintained and preserved as an example of the earlier cities and way of life. These cities are some of the most famous Uzbekistan historical landmarks, that attract tourists very easily. Some major cities that fall in this category are Afrasiyab, Ak-Kala, Kampiretepa, and Kanka.

Suggested Read: Uzbekistan Nightlife: Explore The 10 Most Vibrant And Exciting Nightlife Spots In 2022

Uzbekistan consists of a deep history that starts from the prehistoric ages. So it is quite obvious that the country would have witnessed the formation of some major cities during the medieval ages of the world. The country saw the formation of many such cities like Itchan Kala, Old City Of Bukhara, Samarkand, and Shahrisabz. Each of these city has its own distinctive charms and features but have some commonality like fortification, structure, religion and much more.

Suggested Read: 10 Ancient Museums In Uzbekistan For An Exciting Historical Tour In 2022

The cities of Uzbekistan have gone through various wars that have been fought between the local rulers and the foreigners who wanted to conquer these lands for its strategic location. Some major fascinating fortifications that are still well maintained and preserved by the Government of Uzbekistan are Ayaz Kala, Ark of Bukhara, Janbas Qala and many more. These form some of the best Uzbekistan natural landmarks that one must visit during your trip to the country.

Suggested Read: 10 Trending Places To Visit In Uzbekistan For A Fabulous Vacation In 2022

With cities and amazing fortifications, it is quite obvious that this country will have a number of palaces. There are a variety of beautiful palaces throughout Uzbekistan that are well maintained and act as museums or as an example for the early architecture and designs that were used in that area during earlier times. Some must-visit palaces in the country are Char Minor, Palace of Khudayar and Varakhsha Palace.

Suggested Read: 10 Incredible Things To Do In Uzbekistan For An Exciting Vacation

Suggested Read: E-Visa To Uzbekistan Will Soon Be Valid For 51 Countries Including India!

Even after being a majority in the Muslim population, the country is a secular one also consists of some major Buddhist sites that are visited by many from around the world. Buddhist monasteries in the country date back to the early 1st century AD, with Fayaz-Tepe Buddhist Monastery being the oldest and most fascinating. Another major Buddhist site, the Kara-Tepe Buddhist Monastery consists of early paintings and Buddhist teachings that are inscribed on the walls of the monastery.

Rich in culture and history, the country has also excelled in its modern-day development and infrastructure. The country attracts a lot of tourists through its modern marvels. Some of the most interesting of these marvels are Khanbandi Dams, Nukus Museum of Art and the Ulugh Beg Observatory.

Further Read: Top 6 Places To Visit In Kazakhstan In December For A Chill-Thrill Holiday!

These were some Uzbekistan famous landmarks that will keep your eye-popping and make you travel in time. The beauty of this country is incomparable. We are sure that you are already excited after reading about these places and cannot stop thinking about Uzbekistan. So stop thinking and plan a trip to Uzbekistan on your next vacation.

Myanmar Travel – Land Of The Golden Pagoda Is Where Every Traveler Should Head To!

Monsoon In Japan: Enjoy The Rains In Japan Alongside Sushi And Ramen!

10 Mosques In Japan We Bet You Did Not Even Know Existed!

10 Mind-Blowing Things To Do During Snowfall In Japan

Phnom Penh Hostels: 11 Affordably Priced Accommodations You Can Stay In