Check Out Our Holiday Recommendations For The Celebs Who Made Headlines In 2016! What’s Your Take? 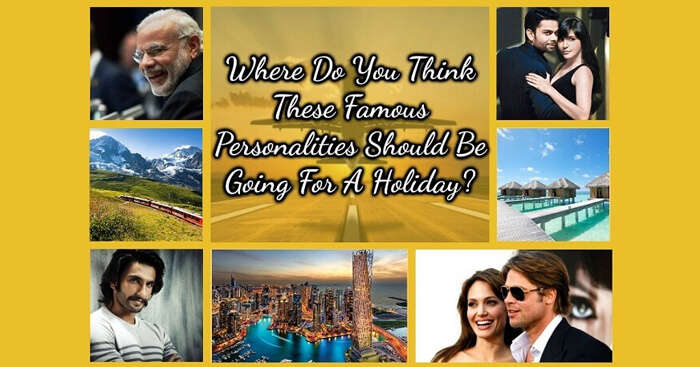 2016 was an eventful year to say the least. A lot of hits and a lot of flops. At the end of the year, we’d like call it a truce and give some holiday ideas to some of our beloved celebs who made the news for right reasons or wrong. After all, we deserve a break in 2017. Even the best of us.

1. Narendra Modi: A Trip To Switzerland to bring back the black money

Our beloved PM rocked us all with a demonetization drive in 2016 that sent the entire nation into panic and a mad rush to exchange invalid currency notes. While we appreciate the strong will of our PM to tackle black money, we also request him to catch the big fish.

We suggest him a trip to Switzerland, to enjoy the lovely mountains and swiss chocolates, with a couple of extra bags as well to bring back the black money stashed by Indians for generations.

First they were dating, then they separated, and now they are dating again. A match made in heaven that paired the two most eligible bachelors in India. With a billion people, cheering the two lovebirds on, we at TravelTriangle advise the couple to tie the knot and give us Indians some joy.

Follow the grand marriage, with an unforgettable honeymoon to Maldives. Pristine white sandy beaches, lovely flora and fauna, and a secluded haven combine to make it a dream romantic destination they crave.

3. Vijay Mallya : A trip to divinity in Dharamshala

It’s basic courtesy that people these days seem to forget. You borrow something, you give it back. A return to India would be a much needed thing for Mr Mallya!

A chance for forgiveness and redemption in the watchful eyes of Dalai Lama. Wash away your sins, and pay off your debts, a spiritual trip to Himachal would provide him a much needed reconnect and sense of direction to a guy who seems to have lost his way.

Another year for Ranveer in which he fascinated, dazzled, and entertained Bollywood fans around the world. A lot of the places to visit in Dubai and the lavish lifestyle resembles with the bubbly, effervescent, and larger than life personality that Ranveer brings to the table.

You came back from the dead and won back Winterfell. Team Jon Snow couldn’t ask for more. As bigger battles lie ahead in the endless winter for the enigmatic King of the North, we offer him a holiday package to Thailand to soak up the sun, and relax in beautiful white sandy beaches before a long dark night that could last a generation.

6. Donald Trump: A trip to the sunny and luxurious Mexico

We all laughed at him, ridiculed, despised, and wrote him off as a loony. Then, he pulled off the biggest shock of 2016 by becoming USA’s next president. Now that the election is won, we invite him to climb the ladder over his wall and jump into Mexico.

Be it the stunning white sand beaches of Cancun and Playa del Carmen, or the culturally rich cities of Guadalajara and Oaxaca, Mexico is a dream for people who love a dynamic travel experience. When you visit Mexico, Mr. Trump, surely you’ll realize the people aren’t that bad after all.

We all looked with astonishment at the video of Aamir’s transformation from an overweight middle-aged dad to a perfectly chiseled wrestler for his movie Dangal. So to rid Aamir off his stressful diet regime, we’d like to send him on a Golden Triangle Tour to enjoy all the delicacies he badly misses.

Start the tour with varieties of chaats and desserts in Delhi. Move to Jaipur as it offers the delicious Rajasthani dishes like Laal Maas and Balushahi. Finally, drive to Agra to see the Taj Mahal and indulge in sinful cuisines like Mughlai chicken and Pethas to savor the best food India has to offer.

One of the most talked about personalities in India, Arvind Kejriwal’s hate for Modi Ji reached an all-time high when he informed the world through a video that Modi Ji is planning to get him assassinated.

So we would love to recommend Arvind Ji a trip to Gujarat. Destinations in Gujarat range from a visit to Gir National Park- for lion spotting, to a visit to the incredibly vast salt lands of Kutch. As the saying in Gujarat goes, “agar Kutch nahi dekha to kuchh nahi dekha”.

9. Coldplay: A vacation down south (India has Kollywood too!)

Away from the glitz and glamour of Bollywood, lies a movie industry in Tamil Nadu equally glamourous and frenzied. Where the actors as worshipped as gods, and their legacies immortalized. The fans down south expected a rendezvous with Coldplay that never came.

Booking a vacation villa in Pondicherry for Coldplay, with the likes of Rajinikanth, Kamal Hassan, Dhanush, Ajith, and Tamanna for a weekend would be interesting. They’ll have picturesque beaches, charming architecture, and delicious sea food to enjoy while they put their professions aside for a while.

Suggested Read: From Running A Marathon To Jumping Off From The Highest Bungee Jumping Spot In The World, He Did It All In His South Africa Trip!

The world seemed a little bit gloomier the day Brangelina decided to part ways. The public outcry was inevitable seeing the popularity this super couple had. There’s always room for reconciliation and introspection in a relationship, and what better place to do it than on a family trip to South Africa.

We’re all proud of piggy chops for how she’s been creating ripples in Hollywood. Starring in Tv shows, and now cult movies like Baywatch. Certainly, that’s one person who’s 2016 has been nothing short of a dream.

We invite Priyanka back to India, to enjoy a grand homecoming where it all began for her. Mumbai, a city of dreams and aspirations. Her loyal fan base in India would love to see her on the silver screen in India again.

Won his country the Euros, and also got crowned the best footballer of the year for the 4th time. After a ravishing 2016, his faithful Indian fans would love to see him visit a destination that lives and breathes football.

Goa, the football hub of india, a kaleidoscope of cultures, and the grand central of partying is an ideal place to visit in India to celebrate your accomplishments and get some sun at the picturesque beaches.

He finally did it! After all these years, he won the precious oscar that eluded him. The performance was highlighted with an epic duel he had with a grizzly bear that nearly took his life. The Grizzly Bear Welfare Association of Alaska have graciously invited Dicaprio back to where it all started to spring up a truce. A chance to visit the stunning landscape of Alaska without having to swim in frozen lakes, fight bears, sleep in horse carcasses, or eat raw bison livers.

14. Arnab Goswami: The nation wants you to go…to Kerala!

One of the most iconic(read loud) news presenters of our generation. Arnab Goswami created a niche for himself by presenting a feisty style of journalism/debating on his most watched TV news show in India. He ended his innings in 2016 as a news anchor on Times Now, we feel that this is an opportune time to send Arnab on a vacation to Kerala.

Having dwelled into the loud sombres of Indian society, a calming stay at an ayurvedic retreat with spa and therapy would be a perfect way to take the load off Arnab’s hyperactive mind.

His brainchild Game of Thrones reached dizzying heights in 2016. The success of the book adaption is unparalleled and unprecedented. For the first time we saw the TV series overtake the books. The loyal book fans have had a excruciatingly long wait for the sixth edition of the book.

We suggest a trip to Bhutan for Mr. Martin where he can keep all the distractions aside and probably finally finish the much awaited sixth edition of A Song of Ice and Fire.

Suggested Read: 7 Must Visit Places In India For Those Who Want A Truly Unique Winter Experience

He’s hot, he’s charming, and he’s talented. Indian girls didn’t take a second to open up to the idea of a Pakistani actor being the poster-boy of Bollywood. However, in the light of ongoing tensions between the countries, he had to leave the Indian film fraternity temporarily. Wouldn’t his legion of fans in India love to see him spread his charm in India all over again.

She might have narrowly missed out on a medal, but she won a billion hearts. Dipa became India’s sweetheart with her heroics in 2016 Rio Olympics. She successfully attempted the daring Produnova, a move so potentially fatal that only one other gymnast has landed it before.

A vacation to Australia to experience the breathtaking adventure sports like bungee jumping and skydiving, as a reward and encouragement to match her brave and courageous exploits in Indian gymnastics and to start 2017 with a boost to confidence and morale.

A hard fought election that left the Obama and Clinton pair heartbroken and dejected. They gave their all in trying to make Hillary win but in the end, the Trump Train denied USA their first female president.

We cordially invite the Obamas and Clintons to put up their feet and evaporate their disappointment in mystical Bali. The picturesque beaches in Kuta and Nusa Dua to the gorgeous temples of Tanah Lot and Taman Ayun heal one and all.

19. Piers Morgan: A trip to the incredible India

Suggested Read: Seven Wonders Of India That You Wouldn’t Want To Miss

A devoted outspoken Arsenal and English cricket fan, a rambling yet impactful journalist, and a twitter celeb- Piers Morgan caught the eye of India when he stirred a storm by calling the Indian performance at Olympics “shameful”. He got a fair bit of stick on twitter for that.

We’d like to invite Piers on a family trip to India, see the struggles of being in a country of 1.2 billion people that recognizes 22 official languages, and the challenges the sports persons have to face in just to get to the grandest stage in the world.

20. Salman Khan: Vacation to Andaman with a Cellular Jail Tour

You know how verdicts are. Sometimes they go your way, sometimes they don’t. For Salman, however, 2016 represented a lucky escape in a case pending on him. We’d suggest him to go on a trip to Andaman and have a closer look at the British Colonial style prison in Port Blair called Kala Paani aka Cellular Jail. A visit to what could’ve been and a chance to make peace with whatever demons left inside.

Do you agree with our holiday suggestions? Can you think of other celebrities who could’ve made the TravelTriangle Hall of Fame for 2016? Leave us a comment below and let us know..

Kasol New Year Party: 15 Famous Festivals And Events To Step Into 2021 On A High Note!

Discover And Relish These Best International New Years Destinations On Budget In 2021!

New Year Party In Himachal: 13 Exciting Events To Welcome 2021 In The Mountains