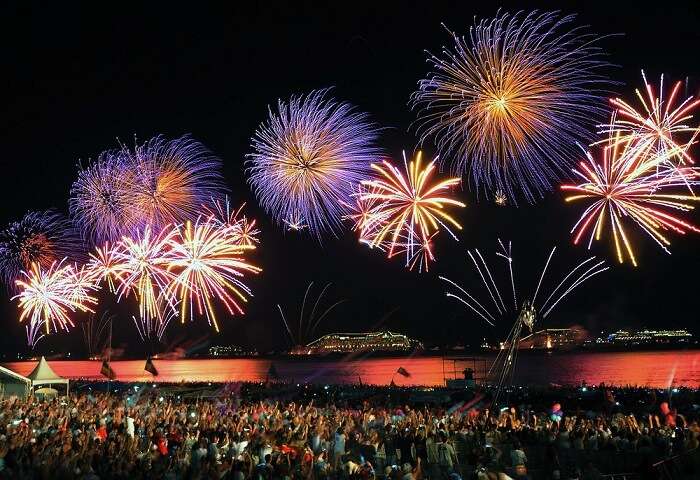 Brazil is one of the largest countries in South America. Brazilians are very much rooted in their cultural values and beliefs. For the Brazilians, New Year is more like a festival celebrated with full zeal and enthusiasm wrapped in traditional values. New Year in Brazil is also pronounced as Ano Nove or Revilion in Brazilian language is celebrated at a large scale. They also welcome the onset of the summer season. After their traditional celebration, the Brazilian people find time for the celebration and land up in pubs, discotheques, clubs and party halls etc. witnessing the local and tourist gathering.

The month of December, every Brazilian get drenched in the tides of festivity and merrymaking. A lot of big parties are hosted, especially Rio De Janerio hosts big parties. People start the preparations for these parties a day before and special emphasis is laid on the fireworks, which are lit up right at midnight to welcome the New Year and bid adieu to the year gone. This firework goes on for approximately half an hour witnessing the people wishing each other good luck and conveying good wishes. There are numerous traditions attach with the New Year celebration, but some of the most preferred ones are one to munch through lentils and rice which is said to bring good luck, fortune, and prosperity. Secondly, to wear white clothes, as it is supposed that wearing white color dress brings good luck and help in sustaining good luck for the rest of the year. Thirdly, the local people of Brazil gather on the beach and jump seven waves in the sea and throwing flowers. They do this and wish for a happy and prosperous new year. This is a tradition initiated by the Candomble and Umbanda tradition where they leave flowers as an offering to the Goddess of Sea Lemanja. Rio de Janeiro new year’s eve 2021 is going to be rocking.

Here are the best places to enjoy new year in Brazil if you are planning a vacation to South America at the end of the year.

Copacabana Beach witnesses some of the most beautiful and happening New Year parties of Brazil. The party is backed by exotic food, live music, millions of crowd and dazzling firework of approximately 15 minutes. As per the ritual and tradition, people wear white clothes and wish for each other’s good luck and prosperity.

This beach is also known as the Brazilian Caribbean Sea and has been acknowledged as one of the most fine-looking freshwater beaches in the world. It is located on the Tapajos River, lying on the northern state of Para. Sandy beach and turquoise water make it one of the calmest places on earth. For the last few years, this beach has been hosting some of the best New Year parties. The party commences from 27th December and ends up on the New Year day. Their live music concert is something which should not be missed and the hidden secret is that on the eve of the party the organizers take the people to a hidden beach where they can party till the minuscule hours in the morning.

The northeastern and southeastern parts of Brazil are most popular among the tourists. The capital city is surrounded by beautiful coastline, and moving a little further will take you to a beautiful small town named Garopaba. Garopaba has gained popularity in a small time. It is becoming one of the most happening places for hosting a New Year party. Their Virada Magica Party has been a center of attraction for many young people. Here, firework is not the breathtaking element instead it is the sunrise that gives a mesmerizing look. It is perfect to celebrate New Year’s day in Brazil.

There are many conceptions whenever it comes to partying in Brazil. Not all Brazilian love to party hard on the beach. Instead, they prefer to escape to some peaceful location surrounded by nature. The southeastern borders of Brazil ranging between Sao Paulo, Rio De Janerio, and Minas Gerais are the places exhibiting such natural beauty. They are calm, have lush greenery, numerous waterfalls, rivers, and lakes along with delicious local cuisines. Visconde de Maua bestride amid the Rio de Janerio and Minas Gerais. Its countryside scene, rivers, and greenery make it a perfect place to dwell upon. There are lots of things to do here like hiking up the mountain, visiting Itatiaia National Park, walking on the pedestrians of the isolated waterfalls etc. there are lots of options available here for you to sit back and enjoy your New Year in peace.

Porto Seguro beach comes next in number after the Copacabana Beach. It is one of the most preferred beaches for hosting a New Year party. Lying on the northeastern border of Bahia, behind the city of Salvador, Porto Seguro has plenty of infrastructure facilities and remarkable beaches. Though other places play mix music like Brazilian pop, in Porto Seguro you will get to hear only one kind of music: axe. It is an amalgamation of Brazilian rhymes: frevo and forro. Have fun enjoying the New Year’s eve traditions in Brazil

It is always good to celebrate New Year’s Eve away from the hustle and bustle of busy city life. How about roaming around in the Heritage Site of UNESCO? If your answer is yes, then Ouro Preto is the place meant only for you. This place has been conserved by Baroque architecture and holds an important place in the history of Brazil. Walking down the aisle of this city truly reminisces you and will take you in the flashback. The government of Ouro Preto arranges for striking fireworks during the midnight while the local hotels and restaurants host parties for the locals and tourists as well.

In the month of December, Brazil witness millions of tourists. Most of them are here to welcome the New Year in Brazilian style. People come here to experience the novel experience of Brazilian culture and traditions. Wearing white color clothes, eating lentils and rice is one of the customs of Brazil. The fireworks displayed during the midnight adds to the merrymaking.

This New Years Eve in Copacabana you will get to hear lot of music like samba, frevo and local music. The beaches will be all set to set the stage on fire and the party will continue till the first ray of sun comes up.

Don’t miss the first breakfast of the New Year. As per the Brazilian tradition, eating lentil soup or lentils with rice will bring in prosperity and good luck for the entire year. This morning breakfast is full of energy and protein especially needed after the night full of dance and enjoyment.

Brazil is one of the most beautiful and largest countries of South America that celebrates New Year in a very enthusiastic way. They dance and enjoy the entire night beneath the open sky. The firework art during midnight is like a bonus. The new year is celebrated with traditions and customs as well. During midnight the local people come out on the beach and jump seven waves in the sea throwing flowers. According to the tradition, by doing this they are offering tribute to the goddess of the sea, Lemanja. If you are planning to ditch parties and take an international trip instead, that is a great idea too.

What do Brazilians eat on New Years?

Brazilians are known to eat food dominated by ingredients like rice, grapes, pomegranate seeds, and lentils because they believe these elements attract luck and abundance.

Why do Brazilians wear white on New Year’s Eve?

Brazilians believe the color white brings good luck, which is why they’ll mostly be seen wearing white on New Year’s Eve to attract good fortune for themselves in the coming year.

What do Brazilians throw in the ocean for New Year?

Brazil has a very unique New Year tradition. On every New Year’s Eve, Brazilians put a bay leaf into their wallets right next to a banknote and these two things remain there side by side till the 31st December of next year. Then on this next 31st December they take these two out of their wallets, give away the banknote to someone, and throw the leaf into the sea or a river hoping for good luck!

Which are the best spots in Brazil to celebrate New Year?

Copacabana Beach, Alter do Chao in Para, Garopaba in Santa Catarina, Visconde de Maua in Rio de Janerio, Porto Seguro, and Ouro Preto in Minas Gerias are some of the best places to head to on New Year’s Eve in Brazil.

Which is the best party place in Brazil to ring in New Year?

Alter do Chão is known to host some of the best New Year parties in the country. The celebrations start from December 27th itself and go up till the 1st of January with the best live music you’ll ever have heard.
Or you can also head to the Copacabana Beach to witness the amazing glory of the Reveillon as well as dance away at the happening beach parties.

23 New Year Eve Parties In Hyderabad 2021 You Should Not Miss!

Restaurants In Brazil: These 10 Brazilian Eateries That Lend Fine Dining A New Meaning