Seven Wonders Of India That You Should Visit In 2021 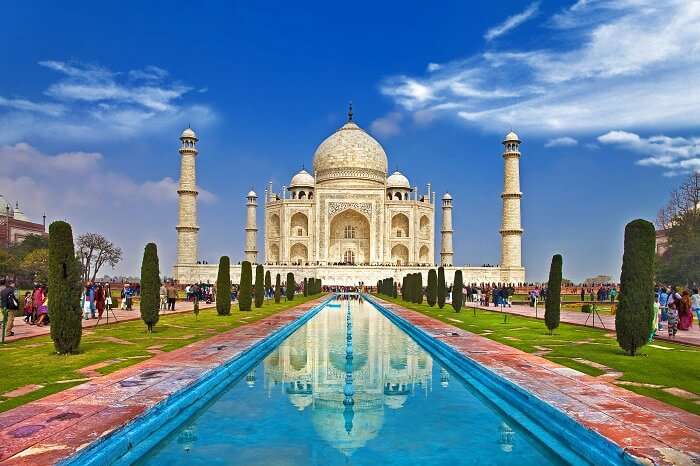 India boasts of diversity in topography, heritage, culture, language, and ethos. The country is known for its rich & inspiring historical tales and heroes. The historical monuments of India speak greatly of these historical tales and have also given us the Seven Wonders of India. Overall, India is a true kaleidoscope of magic and charm; a true wonderland too.

The Times Of India, in 2007, carried out an SMS poll to vote for the 7 wonders of India out of a list of 20 identified sites. The public voting through SMS generated a comprehensive list of the Seven Wonders of ancient India. Have a look!

Gomateshwara is a monolithic statue, dedicated to God Baahubali of Jain religion. Located in Shravanabelagola in Karnataka, the massive art wonder was voted as one of the 7 wonders of India. The grand structure is one of the largest free-standing statues of the world and looks immensely peaceful & serene.

What’s special: The temple hosts the Mahamastakabhisheka festival that happens once in 12 years. During this celebration, the figurine is washed and polished with milk, saffron, and ghee to maintain the shimmer & luster of the rock.

Must Read: 16 Out-Of-The-World Things To Do On The Golden Triangle Tour

Located by the banks of the river Tungabhadra in Karnataka, Hampi is one of the most famous historical places in India. Hampi is known for its historical ruins and relics of the grand Vijaynagar Kingdom and the marvelous showcase of art has made it one of the Seven Wonders in India. The charming site is recognized as World Heritage Site by UNESCO and comprises of stunning architectural ruins of temples and monuments.

Suggested Read: 15 Captivating Places To Visit In November In India

Harmandir Sahib, more popularly known as the Golden Temple and Durbar Sahib, is the holiest shrine of Sikhism. Adorned inside and out with sections from the Holy Granth Sahib, it is one of the most popular religious places in India. The gold-plated structure showcases copper domes and sparkling white marble walls, reflecting Islamic-style floral patterns. Its serenity & the charm of the place, clean & hygienic ambiance, and spiritual solace have made it one of the extremely popular wonders in India.

Khajuraho is one of the selected Seven Wonders in India, known for its cluster of marvelous Hindu & Jain temple structures and their jaw-dropping statuettes. The spectacular artwork and sculptures depicting supreme romance and eternal love is not only acclaimed in India but also worldwide.

How to Reach: Khajuraho has its own airport and railway station.

Suggested Read: 13 Best Things To Do In Khajuraho For The Adventure Seekers In 2021

Sun Temple, located at Konark in coastal Orissa, is a cluster of ancient temples with stunning artwork & sculptures. This stone beauty is one of the fabulous seven wonders in India, built in typical Kalinga style pattern by the King Narasimhadeva-I of the Ganga Dynasty.

What’s special: The three statues of Sun God where the sun rays fall on dawn, noon, & dusk and the sundial with 12 wheels pulled by seven horses depict the time of the day

Suggested Read: 30 Places To Visit In India Before You Turn 30

Nalanda, located near Patna, is one of the ancient education centers in India. This is one of the oldest universities in the world. It is believed that students from China, Tibet, Persia, and Greece traveled up to here to attain education and enhance learning skills. The excavated ruins of Nalanda have enticed history enthusiasts and travelers through the ages which led to its presence on the list of Seven Wonders of India.

Suggested Read: Visit These 5 Temples In Bihar To Feel A Connection With The Divine In 2021

Taj Mahal, the white marble mausoleum in Agra, was built by the Mughal emperor Shah Jahan to iconize his love for his wife Mumtaz Mahal. This marvelous masterpiece is regarded as one of the World Heritage Sites and showcases Islamic artwork. Taj Mahal is not only considered to be one of the 7 wonders of India, but it is also listed among the Seven Wonders of the Medieval World.

What’s special: The marvelous architecture and the grand entrances

Are tourist places in India open during Covid-19?

We won’t say all, but yes most of the places are open for tourists/honeymooners during Covid-19. But before you plan your trip to any of the places mentioned in the list, make sure you follow the given precautionary measure for Covid and adhere to the norms of social distancing. It is also advised to take a look at the recent updates before heading to any of the tourist places in India.

Which is the only Indian monument to appear on the list of the new seven wonders of the world?

Taj Mahal is the only Indian monument on the list of the new seven wonders of the world. But the other wonders mentioned in the list are too magnificent.

Is Niagara Falls a wonder of the world?

Yes, for those who don’t know Niagara Falls is the new 8th wonder of the world. Do read about its fascinating history and tour the absolute wonder with your travel buddies.

Which of the 7 wonders of the world still exists?

Out of the classic 7 wonders, the Great Pyramid of Giza is the only one that exists.

Planning A Cruise To Maldives In 2021 And Don’t Know Where To Start? Look No Further!