10 Magnificent Egyptian Temples That Tell A Great Many Tales Of The Bygone Era! 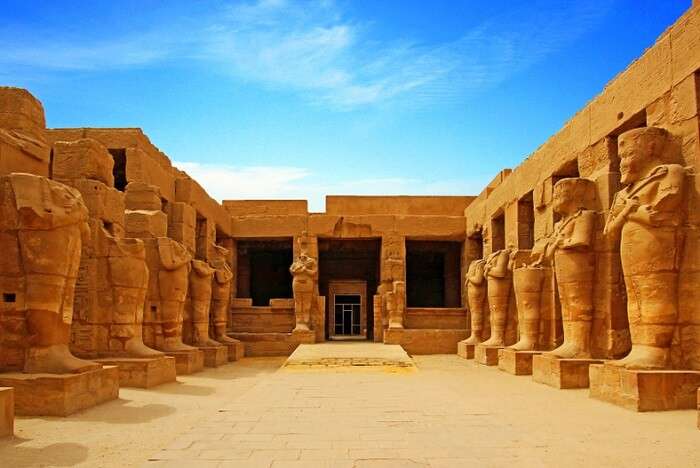 Egypt is known as the land of old charm and mystery, and if you are planning a trip to Egypt this year, there are many places which you can visit to make your trip memorable. And you can start by exploring the country’s ancient Egyptian temples. The Ancient Egyptian civilization had lasted for more than 3,000 years, in which many rulers made their mark by building monumental pyramids, temples in Egypt, sphinxes and many historical monuments. So make sure you make your Egypt tour complete by visiting these marvelous monuments at least once.

10 Most Beautiful Temples In Egypt

To make things easier, we have created a list of Egyptian temples, which you can visit and witness the beauty and skill that reflects in the architecture of the Egyptian temples.

This magnificent temple is located on the east bank of Nile, with the Temple of Luxor being the focal point. This city in the ancient times was known as Thebes, the construction of the temple was initiated under the reign of the New Kingdom pharaoh named Amenophis III in 1392 BC, and was completed by Ramesses II. Temple of Luxor was used to celebrate festivals and many ancient rituals which also included the annual Theban festival of Opet.

The main entrance of the temple originally had 6 colossal statues of Ramesses, out of which 2 are still standing today. The entire temple is built from sandstone, which has pylons about 70 feet high. You can also admire the huge statues, obelisks and the peristyle courtyard inside the temple. The columns inside the temple have been inscribed with hieroglyphics which tell the tales of the pharaohs heroic achievements during their rule. There are many facilities available in the city of Luxor, so if you would like to spend the night in the city, you can easily get any hotel which is suitable for your budget.

Medinet Habu is located on the west bank of Luxor, in Arabic, this name means huge temple complex. The temple was built by two pharaohs Hatshepsut and Tuthmosis III who dedicated this small temple to Amun. Right next to their temple Ramesses III built his mortuary temple. Each side of the tower at the entrance depicts Ramesses slaying his enemies. The entrance tower also showcases a granite statue of a goddess named Sekhmet. After you enter the migdol tower you can see the vast space which is in front of the first pylon of Ramesses mortuary temple. The walls of the temple have been inscribed with military victories of Ramses III, which allow you to understand how they celebrate their triumphs over the Libyans and Asians.

Originally the construction of the temples was started by Ptolemy VI Philometor during early second century BC. While walking around the axis of the temple, you can easily spot 2 courts, 2 colonnades, 2 hypostyle halls and lastly 2 sanctuaries which have been duplicated meticulously. So there are literally two of everything starting from. This temple is definitely one-of-a-kind due to its symmetry and the most beautiful location by the river bank making this worthy of paying a visit to admire the Egyptian temple’s architecture.

The Temple of Isis was originally built on the island of Philae during the ancient times was considered to be the center of the cult of goddess Isis. The goddess Isis represents motherhood and fertility. This temples construction was started by Ptolemy II Philadelphus and continued to until the rule of a Roman emperor named Diocletian, which also led to the deity being popularised throughout the Roman empire.

Small sanctuaries and shrines located close to the main temple celebrate the deities in the Isis and Osiris mysterious myth. The temple now has been relocated on the Island of Agilkia with the help of UNESCO, to prevent the temple from submerging by the Nile. This ancient Egyptian temple is definitely a site to see when you are touring ancient Egyptian temples.

The Temple of Edfu was built for the falcon god named Horus. This is one of the second biggest Egyptian temples after Karnak and also considered to be well-preserved. The construction of this temple commenced in 237 BC throughout the reign of Ptolemy III and was completed 2 centuries later in 57 BC by Ptolemy XII, who was the father of beautiful Cleopatra.

This temple consists of many traditional elements which represent the ancient Egyptian temples architecture, combined with a few Greek elements like the house of birth (the Mammisi). The temple is surrounded by colossal columns, you can also see granite shrines, sculptures, statues of Horus and some of the walls in the temple have also been inscribed with hieroglyphics and tales of Horus.

Suggested Read: 10 Unique Things To Do In Egypt That No Travel Guide Will Ever Tell You About

This temple is located on the west bank of the Nile River in Abydos and is known to be the mortuary temple of the great Pharaoh Seti I. The construction of this temple took place during the end of rule by Seti I.

The temple also has a chronological list of all the pharaohs who belonged to Menes in Egypt. You can also see that the columns found inside the temple are filled with designs, hieroglyphics, and stories of the great pharaohs.

This is a mortuary temple dedicated to Hatshepsut, who ruled Egypt from 1479 BC till her demise which was in 1458 BC. The temple is located on the west bank of the Nile River. It’s known to be a colonnaded structure, which was designed and executed by Senenmut, who was the royal architect of Hatshepsut.

The temple is simply unique as it is built into a cliff face, that slowly rises above it and it also includes 3 layered terraces reaching up to 30 meters in height. All of the terraces are connected by long ramps which were surrounded by lush gardens during those times.

This marvelous temple is located beneath the cliffs near the west banks of the Nile River. Abu Simbel is truly a place to visit, to start off it is carved along the mountainside. The temple was constructed during the reign of the great Pharaoh Ramesses in 13th century BC and was built as a monument for Pharaoh and his wife Nefertari.

The temple was relocated in the 1960s to prevent this beautiful temple from submerging during the construction of the water dam on the Nile River. This temple is truly captivating to say the least and is visited by tourists from across the globe.

Although the Karnak Temple Complex is somewhat ruined, it is still one of the most famous Egyptian temples to visit in Egypt. This beautiful temple is known as the largest ancient and religious sites in the whole world, which also celebrates the achievements of the ancient Egyptian temples architecture over the years.

This temple consists of 3 main Egyptian temples, which has small enclosed temples, and other outer temples which are located 2.5 km which is north of Luxor. You would be surprised to know that most of the work in this massive temple was executed by the pharaohs of the New Kingdom. One of the most famous structures found inside the temple is the Hypostyle Hall which is 50,000 sq ft in size and has about 134 massive columns which are arranged in 16 rows. You can also see a spectacular light and sound show during the evening and witness the magic and admire the architecture of this beautiful temple.

Suggested Read: 10 Most Magnificent Egyptian Monuments That Will Put You In A Trance

This was considered as one of the largest temples in Egypt, but it has completely disappeared except for these 2 statues which can be seen. But, these two statues are quite damaged, and the features of the face of the statues are almost unrecognizable. Even though there is nothing to see here except these two colossal statues, tourists still visit this place to get a glimpse of the 2 statues.

Further Read: A Trip To Egypt? See What All To See And Do For The Best Holiday Experience

So, make sure to add these ancient yet absolutely stunning Egyptian temples to your list when you sit down to plan your Egypt tour itinerary. Know of any more notable temples in Egypt that travelers would be interested in visiting? Pop them in the comments below and help make their Egypt tour even more memorable!

10 Temples In Vadodara That Are A Must Visit!

8 Magnificent Temples In Sikkim One Must Visit For Spiritual Solace