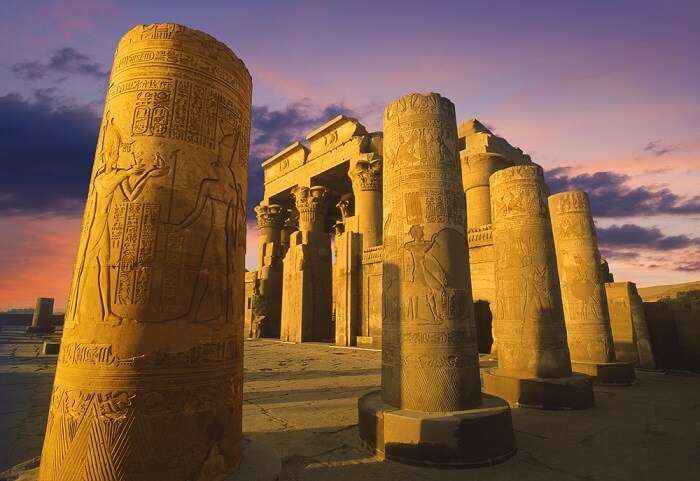 Egypt is home to several ancient monumental structures with exquisite architecture. The civilization of Egypt is one of the oldest and the richest. The rulers of ancient Egypt erected many impressive monumental creations as a symbol of their rule over a kingdom. These magnificent Egyptian monuments are great examples of the best art and architecture of that time. The many temples, pyramids, sphinxes of pharaohs etc. were built by the incredible architects of that time and they still stand intact over the years.

Out of the many impressive monumental structures here, the 9 most impressive ones are listed right here. Which one would you like to visit first? 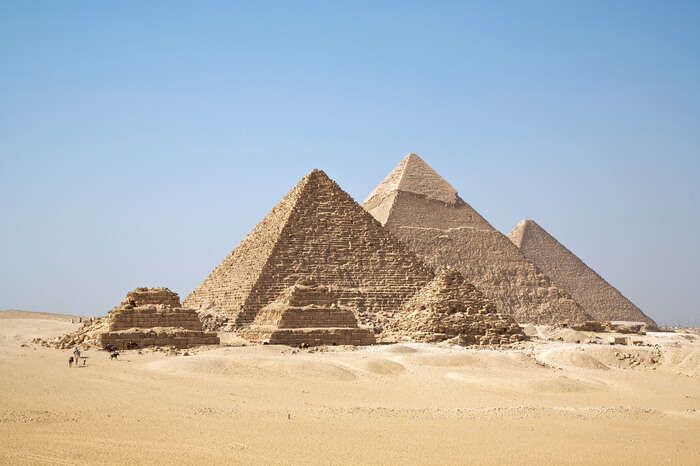 The Great Pyramid of Khufu, the Pyramid of Menkaure and the Pyramid of Khafre are the monuments of Egypt that form the popular complex- The pyramids of Giza. It is counted among the Seven Wonders of the World and is one of the best Egyptian monuments. Each of these pyramids comprises the tomb of a late pharaoh with a sphinx in front of them. An interesting Egyptian architectural fact that is featured in these sphinxes is that they have been carved out of a single block of stone. So, if you wish to witness the best attractions of Giza, make sure to visit Pyramids Of Giza.

2. Valley Of The Kings Image Credit: Annemarieangelo by flickr
The afterlife of pharaohs is celebrated in the Valley of the Kings which is considered to be one of the best Egypt monuments. This spectacular valley is located on the western bank of the River Nile. In this valley, the great pharaohs of ancient Egypt were wrapped like a mummy and buried in deep tombs with their beloved pets and their valuable sacred artefacts. There are more than 64 chambers and tombs within this valley, with Tutankhamun being the most famous one of all. 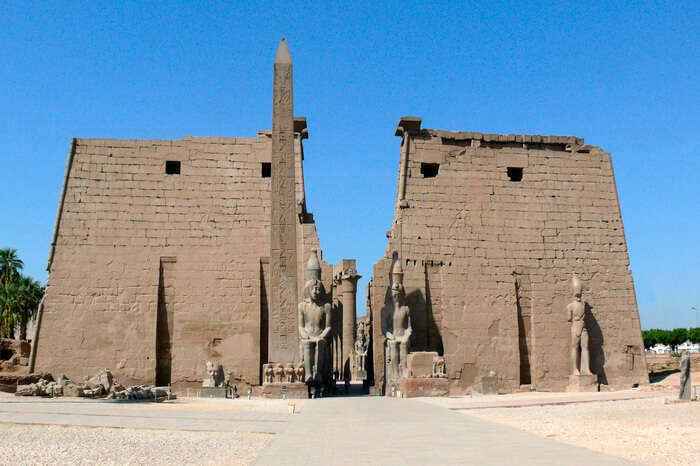 Luxor Temple, now popularly known as the Luxor City, is a magnanimous complex that houses six other majestic temples. All these temples of the complex have been dedicated to Amun, Mut, and Chons who are the Egyptian gods. One can find this splendid monument on the eastern bank of the River Nile. Luxor Temple complex hosts the famous Opet Festival which is a well-celebrated ancient Egyptian festival. These temples in Egypt are made from sandstones and have been constructed in such a way that the flow of air inside the complex is perfectly maintained.

17 Mystical Places To Visit In Egypt In 2022 That Will Make You Pack Your Bags Right Away! 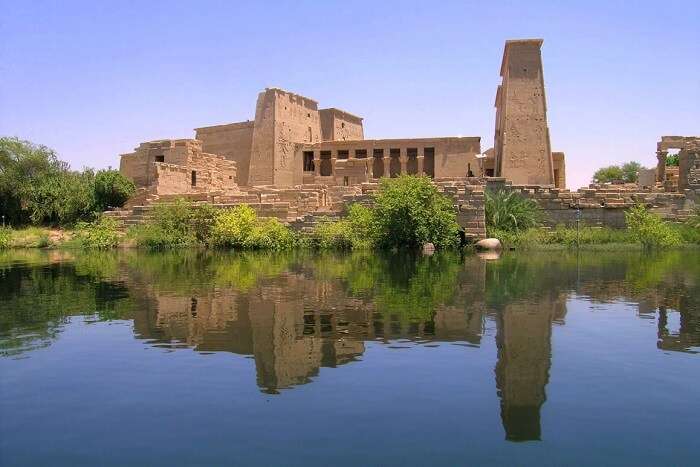 Image Source
This is where Isis, the goddess of motherhood and fertility is worshipped. There are many small shrines and sanctuaries near the main temple area which are very beautifully instilled with intricate artistic detailing. These shrines and sanctuaries depict the gods and goddesses who form a major part of the Isis and Osiris myth. Isis is a popular deity worshipped by the Romans. It was first built on Philae Island and was later moved to Agilkia Island to prevent flooding. 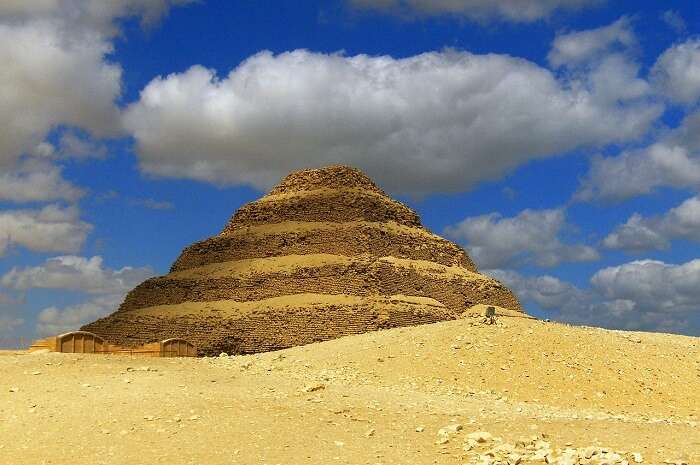 Image Source
It is one of the Egyptian ancient monuments of the old capital, Memphis with a unique stepped-side structure. It is very different from the many smooth-sided pyramids like the Pyramids of Giza. It was constructed to hold the remains of Pharaoh Djoser by the architect Imhotep who later on was popularly known as the God of Architects. The innovative design of this pyramid is what sets it apart from the other pyramids of Egypt and makes for a visual treat. 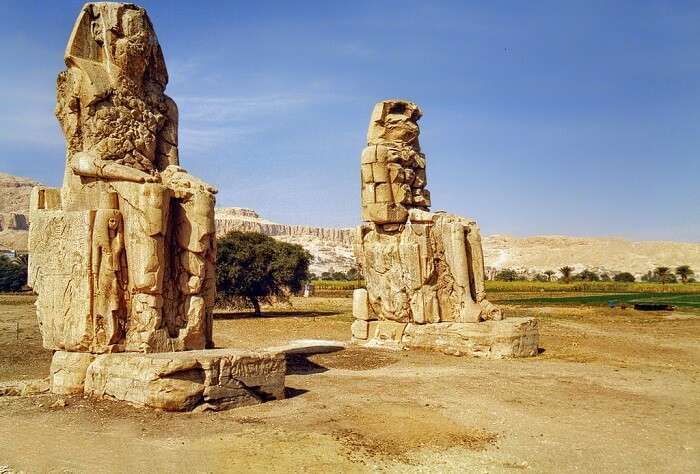 Image Credit: Ray in manila by flickr
Colossi of Memnon is the depiction of Amenhotep III pharaoh through two humongous sized architectural statues up to 75 feet in height and 750 tons in weight, which were built as guards for the mortuary temple. Quartzite sandstone was intricately carved to form a stature in a seating position with both the hands of the pharaoh on the knee and the gaze towards the river. Over the time, a few damages have hampered the beauty of these two statues but tourists from every nook and corner of the world do not miss visiting this place when they are in Egypt.

7. The Great Sphinx Of Giza 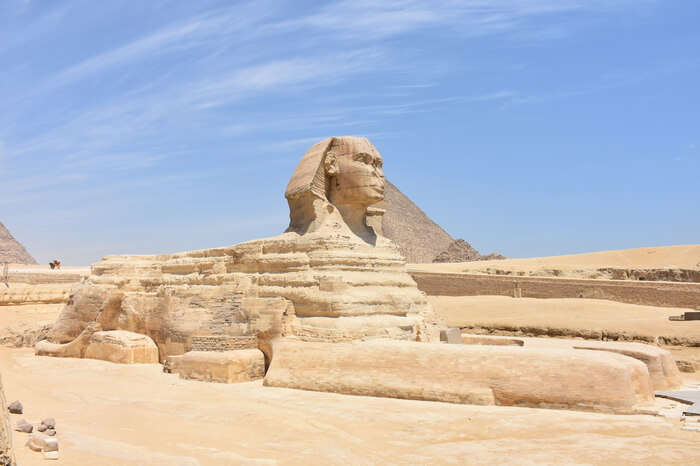 The Great Sphinx of Giza is the world’s largest and the oldest known monolith statue which is situated on the west bank of the River Nile. It is a gigantic statue made with sandstone depicting a mythical creature with a head of a human and the body of a lion. A few damages can be seen on the face of the Sphinx but it still stands erect with all its glory and attracts visitors from every part of the world. 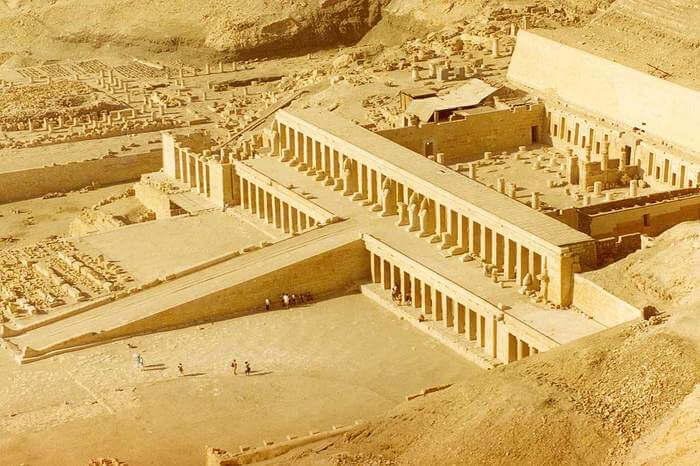 The list of Egyptian monuments is incomplete without mentioning the Temple of Hatshepsut which is a mortuary temple specially dedicated to the Sun God, Amon- Ra. As the name suggests, it was built by Hatshepsut during his rule over the area. The marvellous architectural design was executed by the royal architect of Hatshepsut. It is designed in such a way that the sunlight comes from the rear wall of the chapel. This is a classic ancient Egyptian monumental asset that must be witnessed by every explorer or traveller visiting Egypt. 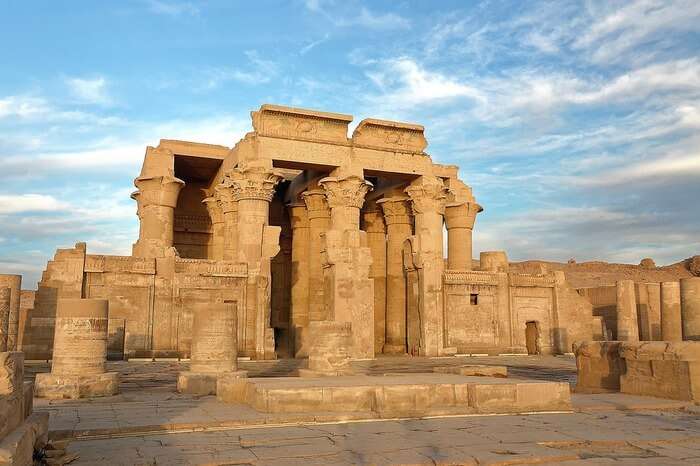 Temple of Kom Ombo is counted among the unique Egyptian monuments and temples. It has an unusual structure with two symmetrical halves. One half of this symmetrical temple is dedicated to Tasenetnofret, Horus the Elder and Panebtawy who is their child. The other half of the temple is dedicated to the crocodile deity of creation and fertility- Sobek and his family Khonsu and Hathor. The beautifully symmetrical parts and its location on the river bank make this temple very impressive.

Egypt is the house of many architectural wonders which leaves the visitors awestruck by the intricate beauty and architecture of these artistic Egyptian monuments. One can make an efficient itinerary to visit Egypt and marvel at these Egyptian buildings and structures!

What is the most famous building in Egypt?

Which are the best monuments to visit in Egypt?

Some of the best monuments in Egypt where you can go for a historical tour include Pyramids Of Giza, Valley Of The Kings, Luxor Temple, Temple Of Philae, Pyramid Of Djoser, Colossi Of Memnon, The Great Sphinx Of Giza, Temple Of Hatshepsut, and Temple Of Kom Ombo.

What famous monument was built in 2500 BCE Egypt?

The Great Sphinx was built in 2500 BCE at Giza, Egypt.

What are the famous landmarks of Egypt?

Which are the best pyramids of Egypt? 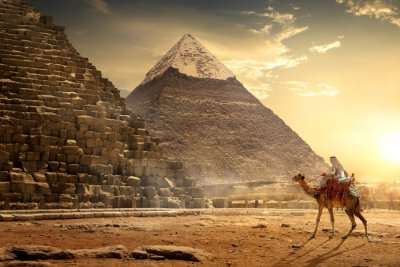 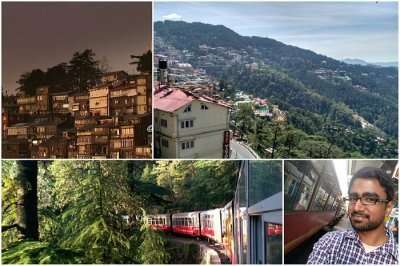 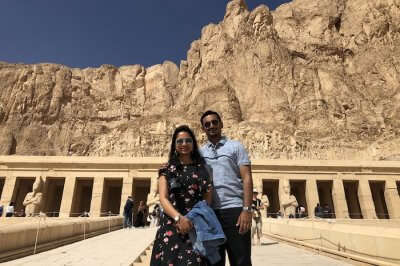