12 Must Visit Places In Egypt In December 2021 That You Must Explore! 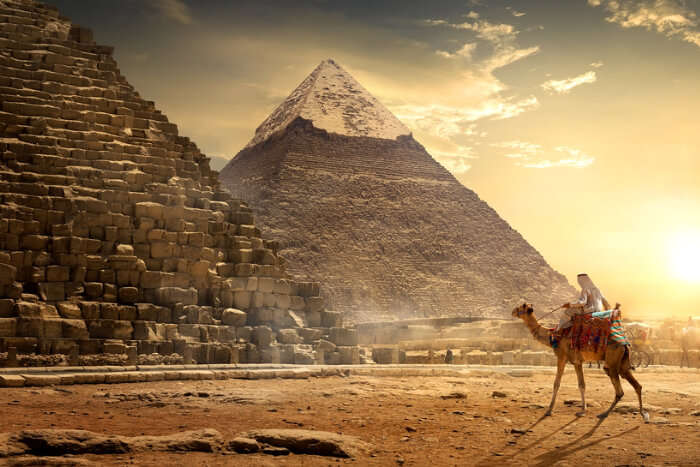 Egypt has always been one of the top notch tourist destinations in the world and there are only few travel enthusiasts who might not know about Egypt and its natural as well as historical heritage of this country. We’ve made a guide for you to help you have a time of your life when you happen to visit Egypt in December. Didn’t you know? The best time to travel to Egypt 2021 is December! Make a beeline for this remarkable nation with your family and friends pronto.

Top 12 Places to Visit in Egypt in December

We’ve shortlisted 12 best places to visit in Egypt in December holidays. Have a look at our complete guide and we assure you that you are bound to get some useful information about what to do in Egypt in the winter season:

Perhaps the best place to visit in Egypt in December holidays, only the name of this epic wonder is enough to turn people to sites of the iconic Pyramids. Not at all far from the city center of Cairo, the Pyramids of Giza used to be the most visited tourist spot in the world until the Egyptian Revolution. Tourists have started to come in slowly citing the improved security in the country, the busiest time of the year is during winters due to pleasant Egypt in December weather during the day.

In olden times, the massive carvings on Abu Simbel Temple used to mark the border line between ancient Egypt and Nubia. These impressive and gigantic carvings inspired by the great Pharaohs of Egypt were also used to warn any invaders of the power and strength of the Egyptian civilization.

Lost in sand due to a massive sandstorm sometime after the end of the Egyptian Civilization, these sculptures were again rediscovered in 1813 by Swiss Explorers. Since then have been on an exhibit outside the temple at Abu Simbel inviting glances of aww from the visitors as they make their way to the temple. The weather in Egypt for December is ideal for a trip to Abu Simbel.

Suggested Read: 5 Experiences On Our Honeymoon Trip To Egypt That We’ll Be Talking About Forever!

Sharm el Sheikh and Hurghada are two luxury resorts that are famous for being the Red Sea tourist hotspots in Egypt. Apart from this, these resorts always seem cheap when you compare them with the luxury and services that they offer. The point is that you need to experience the vibrant Marine life of the Red Sea.

It is resorts like these which offer detailed guided tours of the breathtaking marine life that lives in depths of the sea near to the shores where these resorts lie. The pleasant weather of Egypt in December will accentuate your snorkeling experience.

Location: Between Africa and Asia
Snorkeling fee: INR 2138 per person

There are two reasons why we came to know about the Ancient Egyptian Civilisation in such a detailed fashion. Firstly, the dry Egyptian climate and weather which preserved all the wonders of the Egyptian civilization and secondly, the well-sealed tombs and mummified remains of the Pharaohs of Egypt. All of these Pharaohs have one thing in common and that is all the burials of these pharaohs are found in the same valley which is also known as the Valley of Kings for the same reason.

This is a must-visit place for all those interested in knowing about the Ancient Egyptian Civilisation. The best time to visit Egypt is December because the Valley of Kings comes alive in this month, and how!

The Karnak temple is the biggest temple to be built around its period, dedicated to the deity Amun-Re, the temple features 134 massive 21-meter high sandstone pillars which form somewhat like a maze for you to get lost inside. Known to many as the greatest temples to be ever built, these temples date back even before the New Kingdom era of the Egyptian Civilization. The perfect time to visit these temples is during winter months due to the mild daytime Egypt in December temperatures.

Suggested Read: 7 Best Honeymoon Places In Egypt To Visit In 2021 For A Romantic Stint By The Pyramids

The Cairo Tower is another major attraction of the capital city of this Ancient Civilization. Located in the Center of Cairo, this tower is made in the pattern of Lotus leaves, the sacred plant for Ancient Egyptians and features a viewing platform and two restaurants. Witness the breathtaking views of the Cairo city, the Nile River and the Pyramids of Giza from this observation deck. The best time to visit this place is during the hours of sunrise and sunset when the views are the most breathtaking.

7. The Colossi of Memnon

Across the Nile river from the city of Luxor lie two free-standing ruined statues which used to depict Pharaoh Amenhotep III – an Ancient Egyptian Ruler in the 1400 BCE. These statues are all that remains of the biggest temple ever constructed in the Egyptian which was destroyed by a massive earthquake about 2000 years ago.

The Montaza Palace is the former Residence of the last King of Egypt, King Farouk I, who was forced to abdicate during the 1950s. Located near Alexandria and also known by its former name, the El Salamlek Palace serves as a Resort and Casino in the present days.

Known as one of the four sacred mountains mentioned in the Bible, the Sinai Mountains has a church and a monastery dedicated to St. Catherine. From this monastery, many religious people and adventure enthusiasts alike start a trek to the summit of this mountain in search of the praising of the lord himself and also to trace the path of god according to the bible. The best time to be on the summit of the mountain is undoubtedly the time of Sunrise and Sunset when the radiates like it is made up of gold.

Mummification was a technique used in Egypt to ease the path to heaven. The process involved taking out all the organs of the body and wrapping it up in a linen cloth. Oddly enough this process allowed the bodies to get perfectly preserved which has given us a chance to know more about these ancient humans in detail.

The Museum features both human and animal mummies and the tools used in the Mummification process by the Ancient Egyptian Priests. One can also know in the detail about the step by step process of mummification.

Ras Mohammed National Park with its clear blue water filled with dolphins, fishes and reefs is a like heaven in middle of desert for diving enthusiasts. This 200 square meter national park area situated on the coast of Red Sea takes its name from the iconic cliffs that are present at the park. Every guidebook recommends you to visit this beautiful and we also insist you to visit this place.

The iconic Gayer-Anderson museum located in the capital city of Cairo is situated next to the iconic Mosque of Ibn Tulun. Situated inside an ancient house which was built as far back as 1645, the house was later restored in 1935 and was later opened as a Museum in 1945.

This means everything from the ceilings to the doors and even the floors of the house are all part of the vibrant history of Egypt. If you’re visiting Egypt in December, make a beeline for this place!

Egypt, thanks to its vibrant history, has always has been a miraculous place to visit. Your holidays in Egypt in December will be culturally arousing. The monuments of this country are so well preserved that they will give you the ultimate feeling of the grandeur of the Ancient Egyptian Civilization. Currently in the process of reaching its former glory as a top tourist destination, this country is bound to reach the landmark soon. Make sure you travel to Egypt in December and have a great time with your near and dear ones here.

What is the weather like in Egypt in December?

Egypt experiences winter season in the month of December. The average temperatures range from 11°C – 21°C. The daytime weather is pleasant and warm, with colder night.

Is December a good time to visit Egypt?

Yes, December constitutes the peak tourist season in Egypt. The daytime weather in Egypt during this month is mild and suitable for sightseeing.

Yes, Egypt is considered as a safe country for tourists to visit. If you take certain precautions that you take in any other foreign country that you’re traveling to, then you’re good to go.

What can you not wear in Egypt?

Since Egypt is a conservative country, resist from wearing short skirts and shorts to avoid unwanted attention.

Does Egypt get snow?

Yes, only the higher altitudes of Egypt, the Sinai mountains receive snowfall. It doesn’t snow in any other part of the country. But In 2013, Cairo had received snowfall for the first time in 112 years.

Which is the best season to visit Egypt?

Winter is the best season to visit Egypt. Winter lasts from October to February, with December and January being the peak seasons.

Is Egypt crowded in December?

Yes, December and January are the high tourist season months in Egypt and are therefore crowded too.

Which is the coldest month in Egypt?

January is the coldest month in Egypt with temperatures ranging between 9°C to 20°C.

How many days do you need in Egypt?

5-8 days are needed to tour Egypt and include all the popular experiences in your itinerary. This includes a trek to the Red Sea.

Is a visa required to visit Egypt?

Yes, Indians need Egypt visa for visiting the country. Indian tourists can get a visa for 90 days but they are allowed to stay only for 30 days, starting from your arrival date.