Couldn’t Get Leh’d During The Summer? Ride To Lahaul And Spiti This September-October! 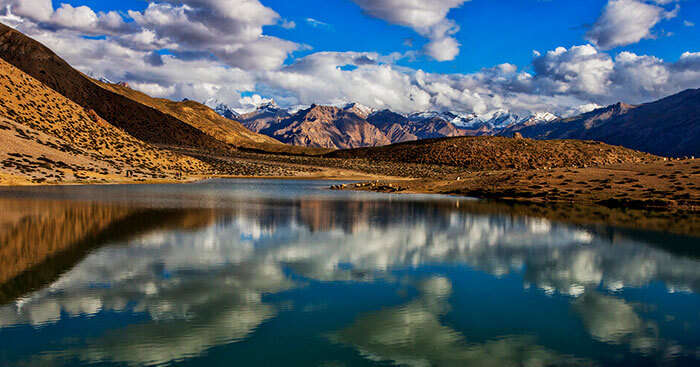 Adorned with the frame of mighty Himalayas, lush-greenery and rough trails, Leh is one of the few places in India which offers infinite reasons to travelers for visiting at least once. Lined up with dotted houses and magnificent stupas, this place holds the reminiscent of the Tibetan culture. While the region experiences abundant snow during the winter season, the best time to visit this part of North India is between the months of September and October. If you’re planning an adventurous trip to Leh-Ladakh at this time of the year, then make sure to know everything about the place and weather before heading out.

Okay! What if I tell you it’s October? Here, have a look…

An October View — Gurgling rivers and crystal clear lakes flavored with the greens and yellows of autumn. Post monsoon apples to be hand plucked from the trees, valleys overwhelmed with butterflies of variegated hues and stable roads (as there is no snow) with a lush green panorama.

Here is why I would never suggest a traveler, (for those who could drift away from the monotonous tourist trails), to visit Lahaul and Spiti in any other months but September- October.

1. A Ride Of Several Journeys

Maneuvering your bike on one of the most difficult roads in India is undoubtedly a thrill anytime. Come September, with rains gone by August, ride the snow cleared stable roads (patchy at few places) in the valleys of Lahaul and Spiti tourism through a surrealistic landscape of snowy peaks of Rohtang Pass.

Distance From New Delhi: Approximately 430 km. If you choose to go by road, the entry points into Lahaul and Spiti are Manali and Sumdo, respectively.

Suggested Read: The New Direct Train From Delhi To Leh Will Get You There In Half The Time

A true land of fairy tales and fantasies with small villages of box-like houses radiating shades of russets, purple and pink, these twin valleys of Lahaul and Spiti are unsurpassed in their glory. Rugged spectacle of their rocky escapements will help you frame the vistas and heritage of these valleys.

Where: Cedar Grooves, view from the Rohtang pass, Chandratal, Dhankar Lake, Langza and the Pin Valley

Best Timings To Shoot: Sunrise, sunset, starry nights, evening – when the butterflies gather down the valleys seen from Rohtang Pass

Must Read: 27 Places In India That Will Force You To Wake Up Early

Rode a horse – Check! Elephant – Check! Camel? – Done! Alright, Yak? I bet you have not thought of it even. A ride on a furry and humble Yak through the breathtaking views of the valleys and chiseled peaks along the river is an adventure of life! While in Lahaul and Spiti, an experience of Yak safari brings you closer to a fascinating culture and its history – all nurtured by the kindest of people living the harshest of lives.

Where: Kaza valley, hike along Snow Leopard and Himalayan Wolf habitats
Quick Tip: As these safaris last long, do acclimatize yourself to avoid any altitude sickness.

Must Read: 10 Indian Destinations Where Your Domestic Trip Might Turn International

4. Flare Of The Fairs

Festivals in Himachal are rare combinations of plenitude and antiquity. Celebrating an ancient civilization of 1000 years which has curated and kept its culture from the onslaught of modernity, you can actually try living in with the locals of Lahaul and Spiti during festivities.

Fairs in September- October: Ladarcha Fair and Pauri Fair in September. Both festivals see a large number of visitors and traders from Kullu, Lahaul and Kinnaur. It is a conference of cultures and get that – all without any interference from rain or snow.

Suggested Read: Camping In Leh 2021: 8 Camps For Sleeping Under The Stars & Waking To The View Of Himalayas!

Fancy a camping experience? Trek to Triund. Ask me for an adventurous camping? Cave Camping in Spiti is what should be on your list.

With rains gone and no snow, some of the most intricate caves become accessible in the mesmerizing mysteries of this wonderland. All this, only possible if you are here in September- October.

Where: Meditate and go into a trance amidst the vibrant caves of Tabo, Spiti.

Disclaimer: The blogger is not daring to say that Lahaul- Spiti are any lesser of a panorama in June. It is suggested in purview of a bygone summer and awesome autumns. The blogger, also, doesn’t intend to replace Leh-Ladakh. All of these marvels are very different (for eg. Spiti talks over BSNL networks only whereas Ladakh is postpaid) and deserve their share of admiration.

So we hope that now you’re convinced enough to plan your trip to this Himalayan paradise and unlock the shackles of the adventure and nature’s retreat. While chalking out your plan, make sure to also take a look and customize your holiday to Leh with TravelTriangle and spend a stress free vacation at the valleys.

Which village is known as the gateway to Lahaul?

What is the best time to visit Lahaul – Spiti?

The best time to visit Lahaul – Spiti is from March to June as you will not have to face many difficulties and the weather will be pleasant too. The temperature during these months vary from 0 to 15 degrees Celsius.

Which pass separates Lahaul and Spiti?

Kunzum Pass or Kunzum La which is one of the least populated districts in India is the entrance pass from Lahaul to Spiti. It is this pass that separates Lahaul and Spiti.

What is Lahaul also known as?

Lahaul is also known as the ‘Valley Of Glaciers’. In 1873 AD a European traveler Andrew Wilson named the district so on his visit to India.

What is life if not a little risk? Well, the road leading to Spiti Valley is one of the most adventurous and toughest roads in the world. There are gravel and asphalt sections on the road and its actually pretty narrow and steep but that is exactly what will make your Lahaul and Spiti trip an adventure .

What is Spiti Valley known for?

Rocky terrains, a strenuous and high altitude trek, festivals and fairs, cave camping and Tibetan influenced culture are some of the many things which Spiti Valley is known for.

What can I do in Spiti Valley?

There are many interesting things to do in Spiti Valley Checking out a glacial lake, Chandratal, visiting Tabo Gompa, attending the Ki Chaam Festival and exploring the Kunzum La Pass are some of the many things you can do in Lahaul and Spiti.

Does it snow in Spiti Valley?

Yes, it does snow in Spiti Valley. The temperatures start dropping from October and in December there is snowfall.

7 Things To Do In Luxor, Egypt: Have A Majestic Vacation With Your Family

10 Best Things To Do In Buriram For A Heartwarming Holiday