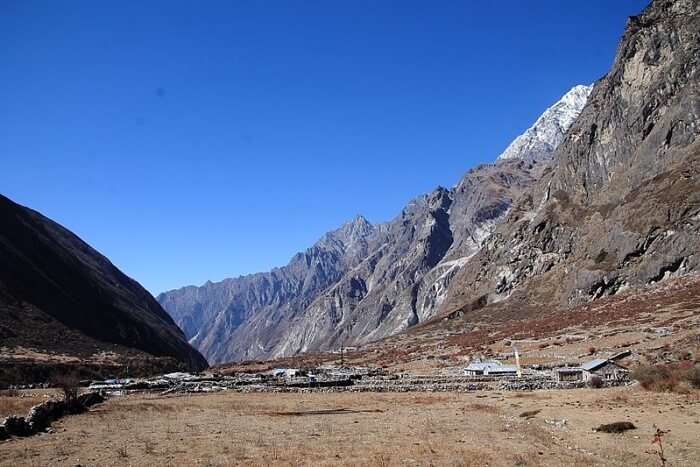 Established in 1976, Langtang National Park is the fourth national park in Nepal which came into existence as the first Himalayan National Park. The park has been a place of curiosity and interest for the wildlife lovers and trekkers alike.

Langtang’s protected area extends from an altitudinal range of 6,450 m (21,160 ft) and covers an area of 1,710 km2 (660 sq mi). The park gets bisected by the the Gosainkunda lake and the Dorje Lakpa range from east–west to south–east. The highest point in the park is the summit of Langtang Lirung(7,245 m (23,770 ft). The northern and eastern border of the national park runs along the international border to Tibet. The western boundary follows the rivers Bhote Kosi and Trisuli and the southern border lies 32 km (20 mi) north of the Kathmandu Valley.

The clarity is great during Autumn (Sept – late Nov) and the views are gorgeous during Spring (Feb – mid April). If you are not the “peak-season-traveler” and are enough warm-blooded then coming here during Winters (Dec – Jan) is also a open-option for you. Winters in Nepal are not snowy but pretty chilly. But a crowd-free trip comes as a perk for visiting the Langtang National Park during this season.

How to reach Langtang National Park

There are early morning buses starting from 7-9 am, that run from Machhapokhari, New Bus Park in Kathmandu to Syabrubesi in Langtang National Park. The ticket fare is between INR 600 – 800.

Since there are no luxury buses running between the two points, you can also opt for a Local Jeep in INR 800 – 1000 or hire a Private Jeep for INR 15,000. The jeep has the capacity to accommodate 6-7 riders and the cost can be shared among them.

There are majorly three treks in Langtang National Park. The treks are filled with forest trails, mountain hikes, village visits and abundance of scenic beauty.

Langtang Valley is world’s one of the most beautiful valleys. Central Nepal’s, Langtang valley region is situated 19 miles north of Kathmandu. It is also near to the Tibetan border. Lying closer to the capital, Kathmandu, this trek is easy yet wild. The valley extends from east to west, and Himalayas to the north and the slightly lower Langtang Lirung range to the south.

Must Read: 10 Engrossing Things To Do In Nepal: Trekking, Rafting, & More

About 80Kms from the capital city, Kathmandu, Helambu is a a\region of highland villages. Kelambu trek is a short trek in the un-touched regions of Nepal. The trek starts from Sundarijal, an hour drive from Kathmandu. After an hour, you enter the Shivapuri National Park. You would cover Chisopani, Kutumsang, Thadepati and Sermathang along the way. The trek finally ends at the Melamchi Pul Bazar in the Helambu region. This is a perfect trek to see thick forested mountains with the backdrop of Himalaya.

Gosaikunda is a gorgeous trek from Kathmandu, that takes six to seven days. The trek starts from Sundarijal, a one hour drive from the capital. Sundarijal is a spectacular place and a picnic spot for locals of Kathmandu, especially due to the waterfall. The trek goes through Mulpani village, Chisapani, Tuksang and Ghopte before you finally reach Gosainkunda. Gosaikunda is a lake surrounded by the hills. The lake is frozen for six months in a year. The breathtaking beauty of the lake and its surrounding pays off the effort you took in trekking for a week.

Suggested Read: 10 Most Popular Tourist Places In Nepal You Ought To Visit On Your Trip

Suggested Read: 11 Fantasy-Filled Places To Visit In Nepal For Honeymoon

You don’t have to worry about where to stay in Langtang National Park because there a number of good hotels to choose from:

Further Read: 10 Ancient Nepal Temples In The Serenity Of The Himalayas

Langtang National Park is indeed a nature’s treasure in the lap of Himalayas. The region has some of the most breathtaking treks in Nepal. Plan a trip to Kathmandu and visit this of the most intoxicating trekking experience and thrilling wildlife encounters.

Move Over Paris! Ring In New Year In Nepal In These 15 Fun Places & Experiences In 2021