Two Weeks In Spain: An Ultimate Guide For Exploring The Country’s Gorgeous Marvels Like A Pro 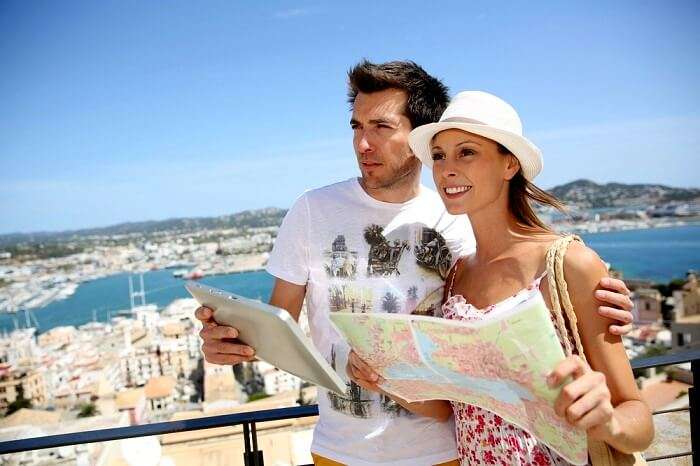 Soul-stirring vistas abound this vibrant country which celebrates life in its myriad hues, from the bold to the magical, every single day of the year. Spain enchants and entices millions of visitors with its awe-inspiring architecture, 45 UNESCO World Heritage sites, breathtaking landscapes and hard-to-resist cuisine. You need to spend at least two weeks in Spain to get a taste of what this amazing country has in store: magnificent cathedrals and castles, wild & whacky festivals, stunning beaches and rich culture & art running through its veins. Here are some of the top recommendations and tips for spending two weeks in Spain to be bowled over by its ineffable charm.

Best Places To Visit During Two Weeks In Spain

Though many choose to spend two weeks in Spain and Portugal on their European adventure, we recommend spending all 14 days soaking in the splendor of Spain.

1. Madrid: Immerse in the magic of the city 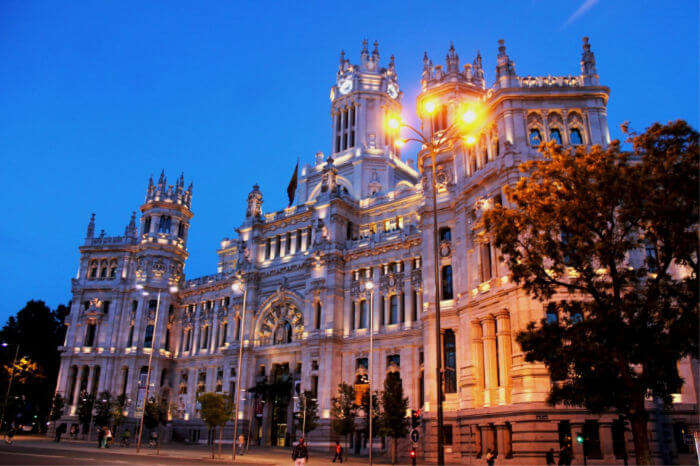 Madrid is not just the capital of Spain but a delightful city throbbing with life and brimming with art & culture. Art lovers must spend time admiring the masterpieces at the top 3 museums: Museo del Prado (specially the works of Goya and Velazquez), Centro de Arte Reina Sofia (famous for Picasso’s Guernica), and Museo Thyssen-Bornemisza. In the evenings you must head out to Plaza Mayor, Madrid’s most beautiful and liveliest square to witness the city in action. Foodies are sure to be smitten by Madrid’s culinary offerings, from tapas bars & taverns to fine dining experiences. 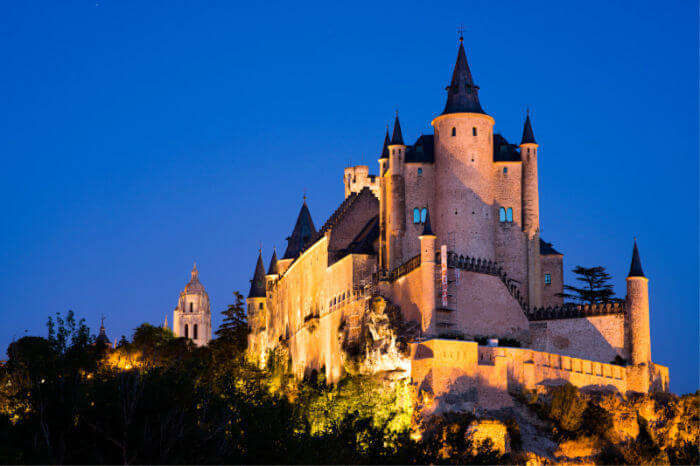 A day trip from the capital city to the UNESCO world heritage listed Toledo is one of the highlights of two weeks in Spain: with its cobbled streets, beautiful Cathedral, Alcazar and stunning Arabic and Jewish monuments, Toledo is a historical gem worth spending a day or more at. Another worthy side trip from Madrid is the stunningly sited Segovia, famous for its amazing Roman Aqueduct, spectacular Alcazar and gorgeous Gothic Cathedral.
Further down south from Madrid, Cordoba is also a must-visit for its Mezquita-Catedral de Cordoba and Alcazar de los Reyes Cristianos. The cathedral is a shining specimen of stunning Islamic architecture with its gorgeous red and white arches. 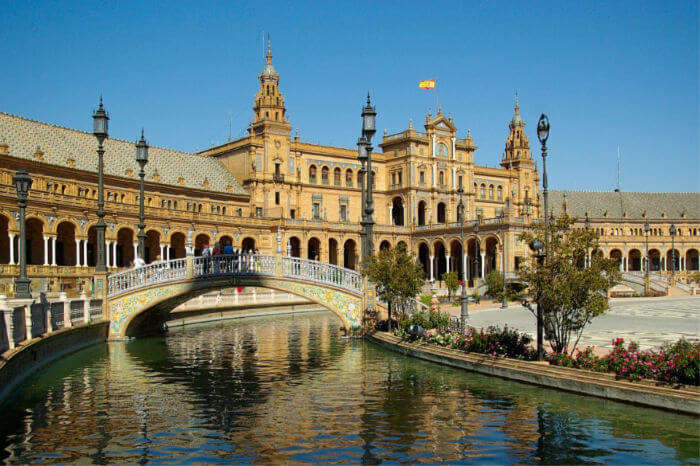 While Seville is home to the world’s largest Gothic cathedral, just 2 hours away Granada awaits you with one of Spain’s most iconic architectural wonders, the Alambhra. Wander along the quaint and pretty streets of Barrio de Santa Cruz in Seville, climb the La Giralda tower and get awestruck by the Alcazar. The next day, amble through the beautiful Alambhra in Granada perched atop a hill with its beautiful Moorish palaces & gardens that have earned it UNESCO world heritage status.

4. Barcelona: Delight your senses with its vibrant atmosphere 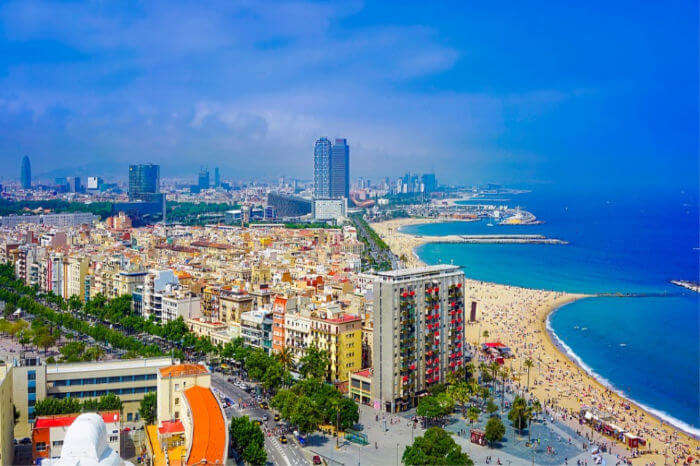 The enchanting Catalonian capital offering a delightful melange of unforgettable sights and experiences deserves at least a few days on your two weeks in Spain itinerary. From Roman architectural treasures to Gaudi’s mind-bending designs, there is so much to admire in Barcelona. This fascinating seaside city also boasts of an enviable culinary landscape and myriad dining options, from oceanfront bars to upscale restaurants. With a lovely Mediterranean coastline, Barcelona beach is ideal for simply putting up your feet and relaxing, indulging in thrilling water sports or setting sail on a sunset cruise. The city’s nightlife and live music scene is as exciting as its myriad tourist attractions.

5. Valencia: Get amazed by the City of Arts & Sciences 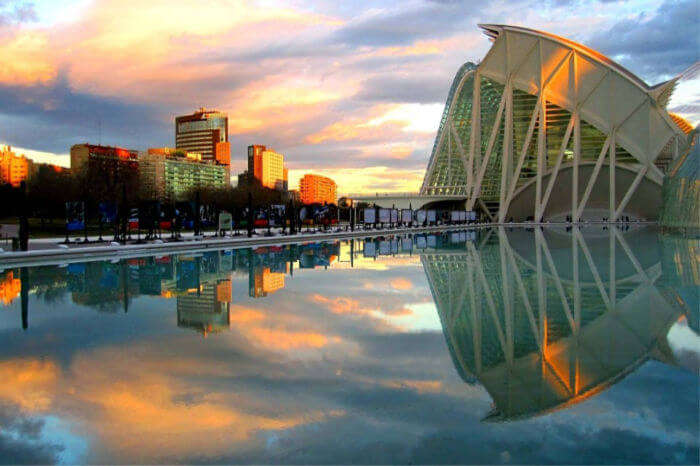 Spain’s third largest city has a charming historic core, outstanding culinary offerings and the magnificent City of Arts & Sciences. While the building’s futuristic design is a treat to the eyes, the museums and aquariums inside are equally fascinating.

Best Things To Do During Two Weeks In Spain 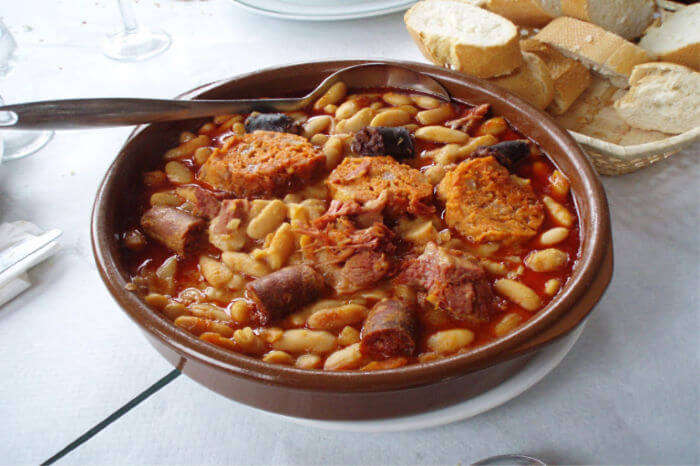 While tapas bar hopping is a great way to sample the hugely popular Spanish finger food, the country also offers some of the best wines in Europe. While Paella Valenciana is a must-try when in the city, San Sebastian has now emerged as the country’s foodie capital with its Pintxos, steak & cider and Michelin star restaurants.

2. Festivals: Participate in the fun fiestas 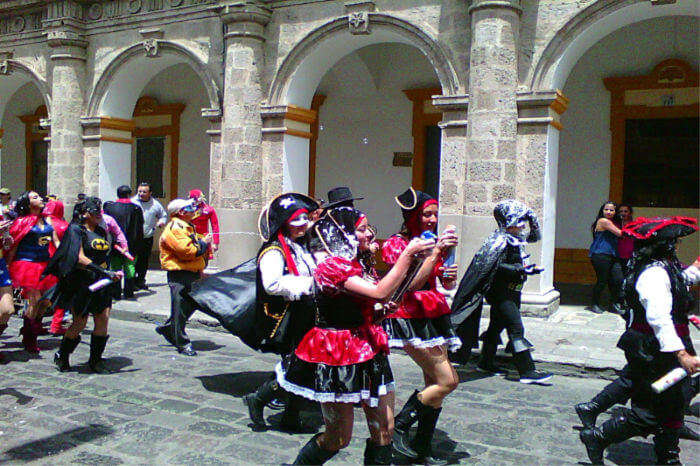 From the hugely popular and crazy La Tomatina in Bunol to the high-adrenaline running of the bulls (San Fermin) in Pamplona, Spain is home to some of the wackiest festivals in the world. Make sure you plan your two weeks in Spain around one of these including La Rioja’s annual wine drenching festival!

3. Beaches: Bask in the sunshine 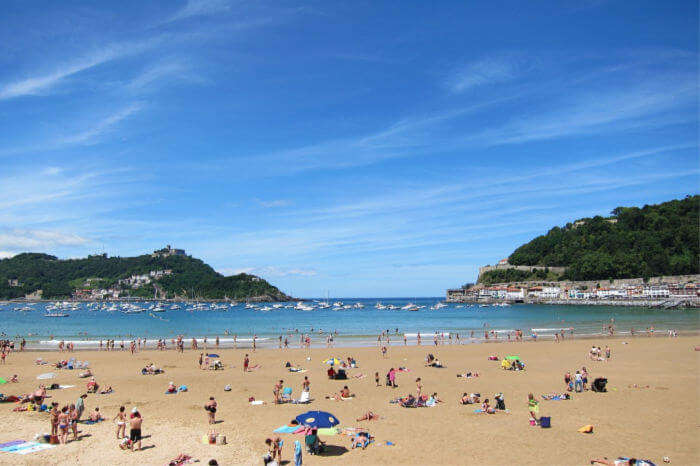 With tons of sunshine, awesome weather and more than 5000 kilometres of coastline, there’s no better place to soak in the sun, surf and golden sands than Spain. Whether it is the tranquil Canary Islands, stunning Mallorca, Tenerife with its gorgeous landscapes or Ibiza’s party vibes, Spanish islands offer the perfect escape from its bustling cities.

4. Flamenco: Get enthralled by a sizzling performance 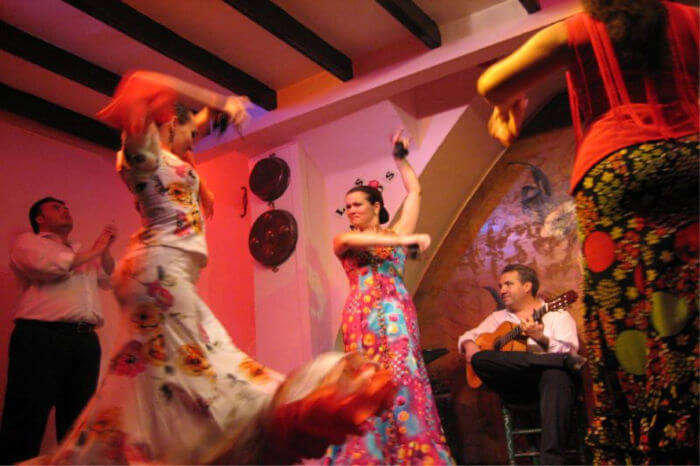 Your two weeks in Spain cannot be complete without witnessing a fascinating and fun flamenco performance in Seville or Madrid. Sit back and let your senses be enthralled by the foot-thumping folk music and elegant dance moves of the flamenco performers. Dance along, clap and cheer to truly participate in this vibrant & thriving folk tradition. 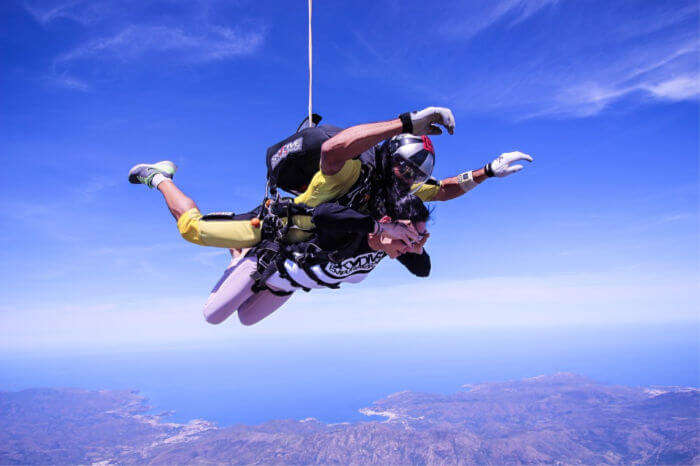 The country is adrenaline junkie haven with endless adventure opportunities including snowboarding, surfing, skydiving, hiking, scuba diving and a zip line between Spain and Portugal. Those craving for some thrill and adventure must squeeze in one of these during their two weeks in Spain for a fulfilling vacation.

Best Time To Plan Your Trip Of Two Weeks In Spain 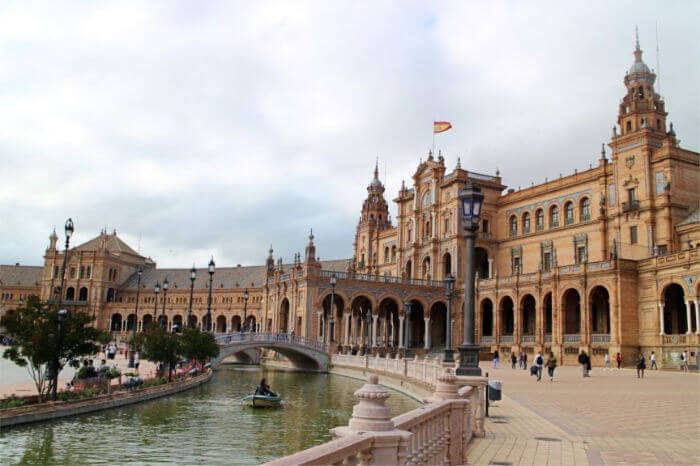 Spring (April-June) and Fall (September-October) are the best seasons for enjoying two weeks in southern Spain as the days have pleasant weather, nights are cool, and the tourist rush is not too much. You can easily explore all the places and witness the beauty of the country at its best.

Top Things To Buy On Your Spanish Sojourn 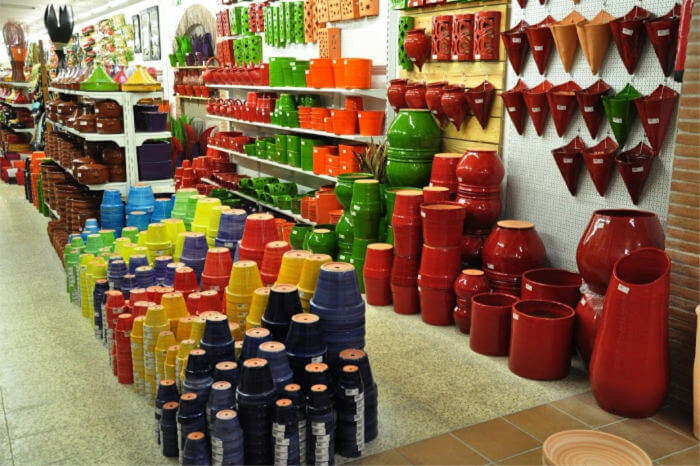 When you brag to friends and family back home that we had two weeks’ holiday in Spain, you better carry along some unique souvenirs to make them a part of your adventure. Here are some of the best things to carry back home from the country:

Cost For A Two Weeks Trip To Spain

Now that we’ve got all the essentials covered, it’s time to stop dreaming of your vacation and start planning your long-awaited Spain holiday with TravelTriangle! We are sure you would have the time of your life amidst the breathtaking beauty of this country.