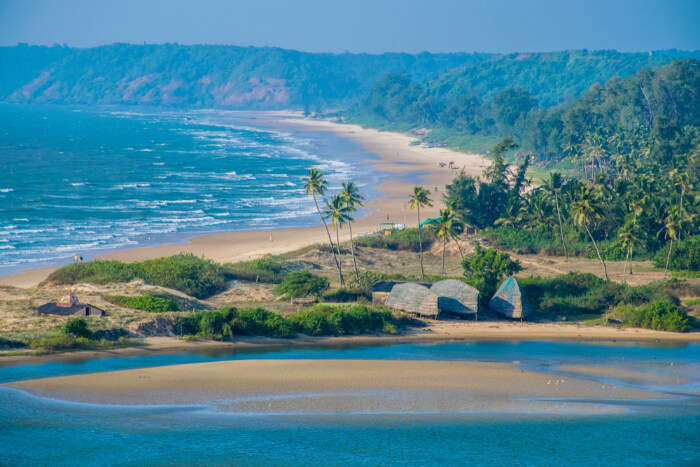 The extensive 7,000-kilometer-long coastline of India is studded with some of the most alluring beaches in the world. Apart from the pristine sands, ultramarine waters, thrilling watersports, and palm linings, some of the unusual beaches in India have a lot more to offer than just a tranquil environment. Offering something different from each other, explore these unusual beaches in India which exhibit a unique characteristic that cannot be found anywhere else in the country. 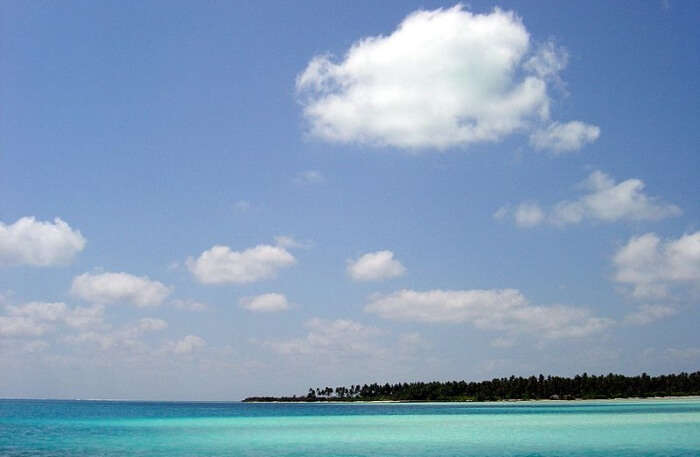 Ever heard of a bioluminescent beach in India? Floating on the Arabian Sea, in the Lakshadweep Island, the Bangram beach is one of the most unusual beaches in India known for the phenomenon of bioluminescence. At night, the beach waters get illuminated due the the activity of phytoplanktons which emit blue light, making the water look like a sea of stars.

Location: Bangaram Island, Lakshadweep
How To Reach: The nearest airport is that of the Agatti Aerodrome from where one can take a ferry till the beach.

Must Read: 8 Best Beaches In Lakshadweep That’ll Blow You Away 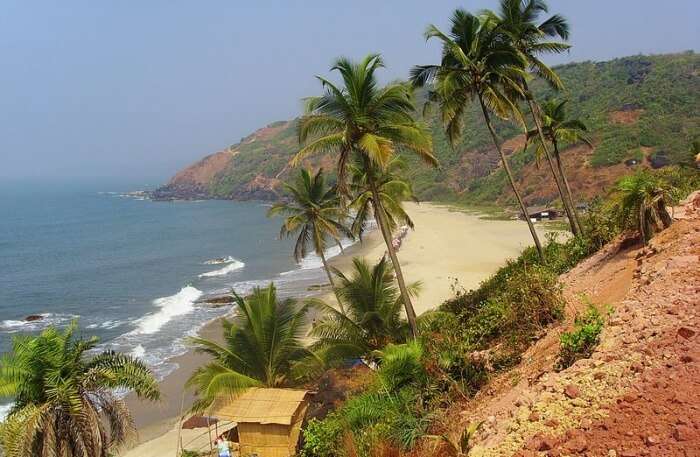 Unexploited by the tourists, Arambol beach in Goa is one of the most weird beaches in India. The astonishing fact about this beach is that it is the only beach in India where one would find sweet water rather than the regular saltwater of the sea. This is because of the presence of a freshwater lake near the sea.

Location: Arambol, Goa
How To Reach: The nearest airport to Arambol is that of Dabolim Airport from where one can hire a taxi.

Suggested Read: 14 Vibrant Festivals In August In India: Save The Dates To Rejoice In 2022! 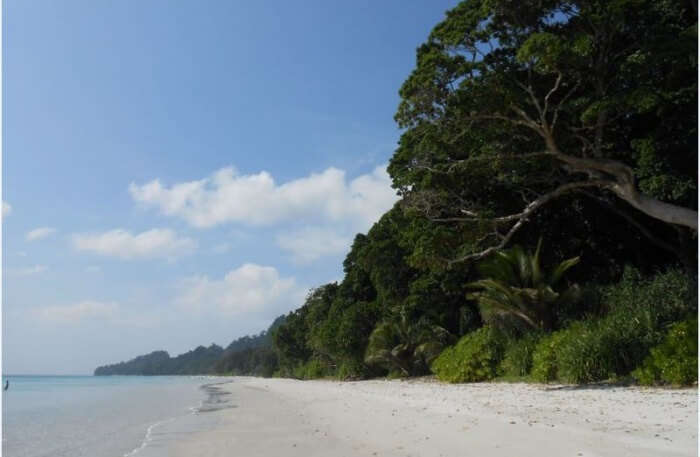 One of the most pristine beaches in India with Blue Water, the Radhanagar beach is crowned as the best beach in Asia. It is one of the rare best beaches in India which boasts of azure blue waters, untarnished white sands, and lush green palms. This beach is also known as the 7th beach as it has also been listed in the top 7 beaches in the world.

Location: Havelock Islands, Andaman
How To Reach: Radhanagar Beach is easily accessible from the Port Blair Airport which is just 70 kilometers away.

Suggested Read: 14 Thrilling Water Sports In Andaman That All Adventure Enthusiasts Must Try In 2022! 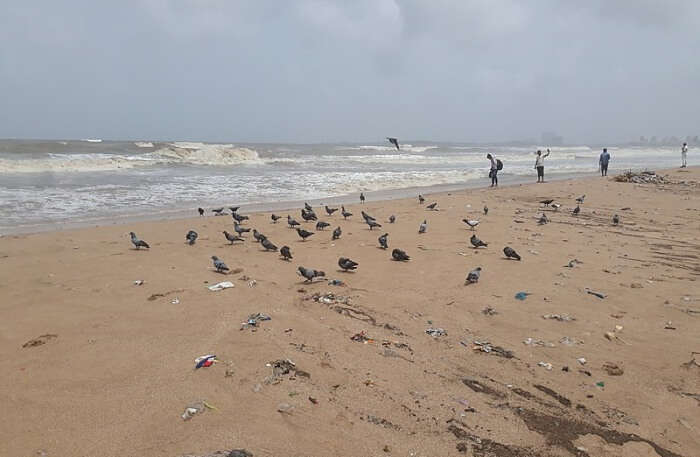 One of the most popular and crowded beaches in India, Juhu Beach also witnesses some unusual activity at the night. The waves of this rare glowing beach in India emit twinkling blue colour at night due to the chemical activity of phytoplanktons. This chemical activity is termed as bioluminescence due to which living organisms emit visible light and appear as shining stars.

Location: Juhu Beach, Andheri, Mumbai
How To Reach: Juhu beach is accessible from the nearest railway station of Santa Cruz, the nearest local station of Vile Parle, and the nearest airstrip is that of Chhatrapati Shivaji airport.

Suggested Read: Visit 14 Luxury Holiday Destinations In India For A Lavish Stay In 2022! 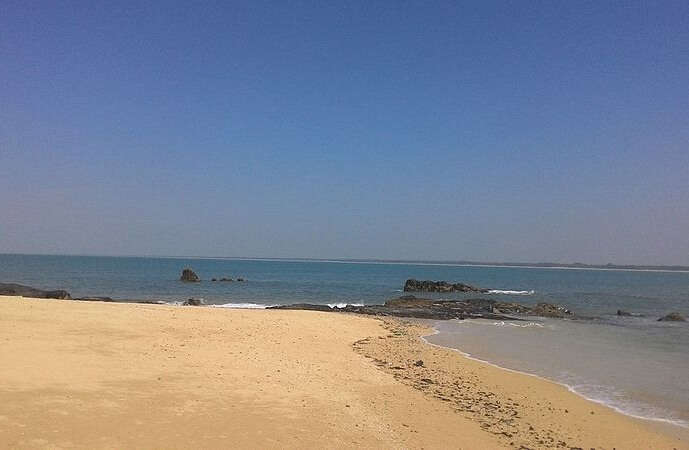 If you are looking for secret beaches in India then visit St. Mary’s Beach, which is one of the most offbeat, and unusual beaches in India. The unusual aspect of this beach is that one would find huge basaltic rock formations throughout the island, due to which it has been listed among the 4 prime geological locations in Karnataka.

Location: St. Mary’s Island, Malpe, Karnataka
How To Reach: This Island is only accessible through water ferries that are available from Malpe Beach. Nearest airstrip is that of Malpe-Mangalore airport and the nearest railway station is that of Udupi Junction.

Suggested Read: Manchester Of India 2022: Know Which City Bagged This Title And Why! 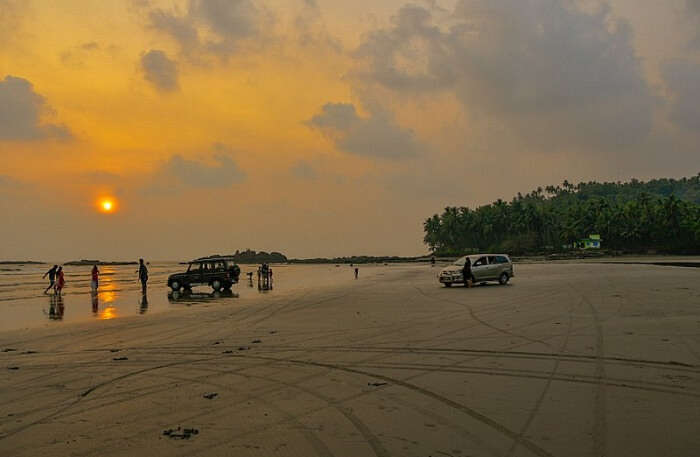 Known as the vanishing beach, the Chandipur Beach is also one of the most unique and unusual beaches in India. Also known as the magical hide and seek beach, it vanishes away during every ebb tide, i.e. the time period between a high tide and a low tide. This phenomenon happens twice a day when the beach when the beach totally disappears underwater as if there was no land at that place previously.

Location: Chandipur Beach, Balasore, Odisha
How To Reach: The nearest airstrip is that of Kolkata Airport and the nearest railway station is that of Balasore.

Suggested Read: These Richest Cities In India Let You Witness The Best Of Modern Lifestyle & Old World Charm In 2022! 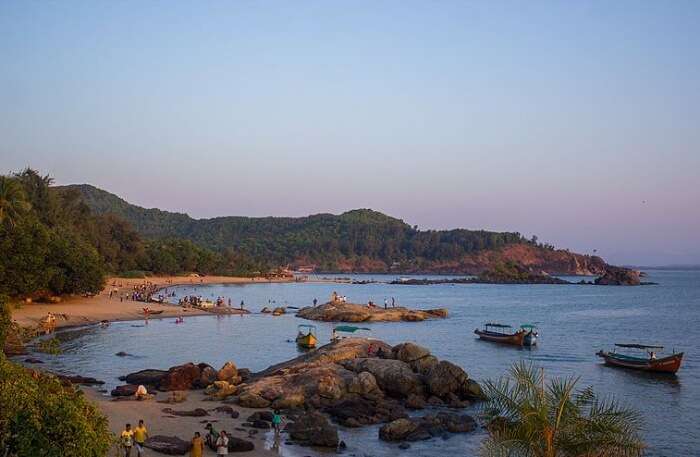 This beach has derived its name from its unusual, and unique shape. Forming contours that resemble the ‘Om’ insignia, this beach is one of the most unusual beaches in India due to its shape. This beach is also famous for its immaculate sand, and ancient temples which attracts large number of pilgrims every year.

Suggested Read: 15 Best Places To Visit In Gokarna For A Harmonious Vacay In 2022! 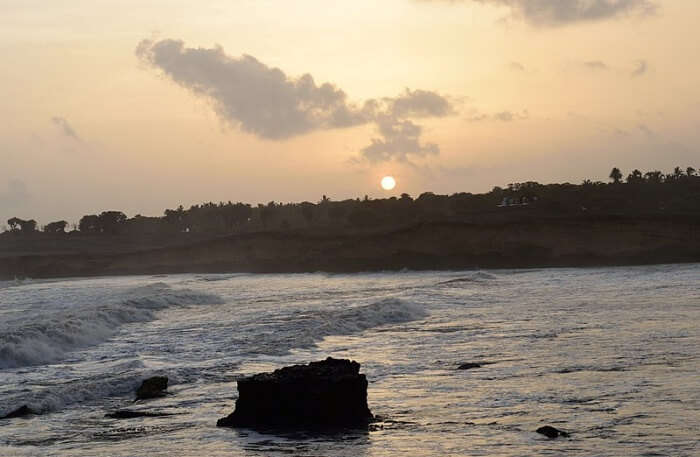 Nagoa Beach is one of the most popular tourist attractions in Diu. This beach is one of the most unusual beaches in India because it is necklaced by rare Hoka trees which are not found anywhere else in the country. These African Hoga Trees were brought here, and planted by the Portuguese during their journey to India.

Location: Nagoa Beach, Diu, Daman And Diu
How To Reach: The nearest airstrip is that of Diu Airport and the nearest railway station is that of Veraval.

Suggested Read: 12 Hill Stations Near Ahmedabad To Escape For A Chilling Getaway 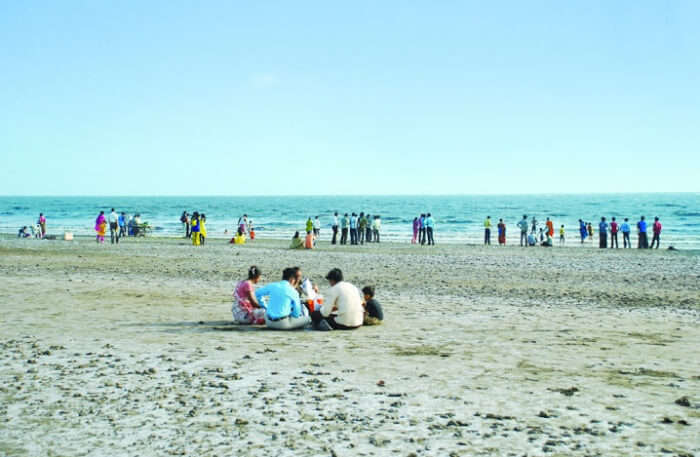 Known as a haunted beach, the Dumas Beach is one of the most unusual beaches in India due to the paranormal activities in that area. Dumas is the 3rd most haunted place in India. According to stories, one can hear sounds of people whispering during the night. It is believed that these are the spirits of the people who were once cremated in this area. 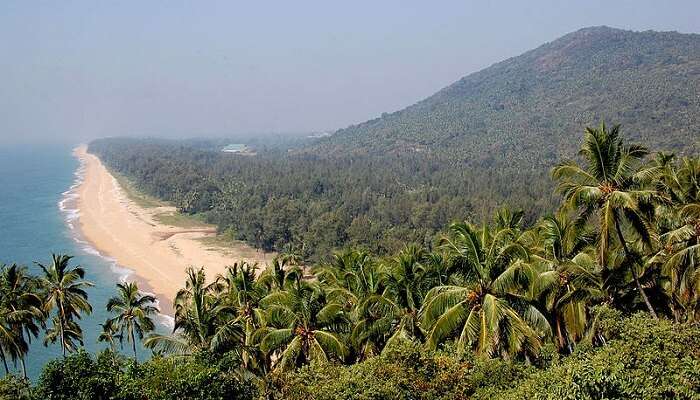 Sitting a few kilometres away from Kannur is one of the most beautiful beaches that one has ever witnessed. Named Ezhimala, this beach is as serene as it can get. This is among the important historical sites sitting in the southern part of the country. One can hear the instances about this beach in Sangam-era literature and the Hindu epic, Ramayana. This beach has an ancient burial chamber, majestic caves, and intricately carved pillars for one to explore.

Location: Azhikode South, Kerala
How To Reach: One can reach Kannur using the railways. After that, one can hire any of the public transport to reach the beach via road.

Suggested Read: Scuba Diving In India: Explore The Breathtaking Underwater Universe At The 14 Best Spots In 2022! 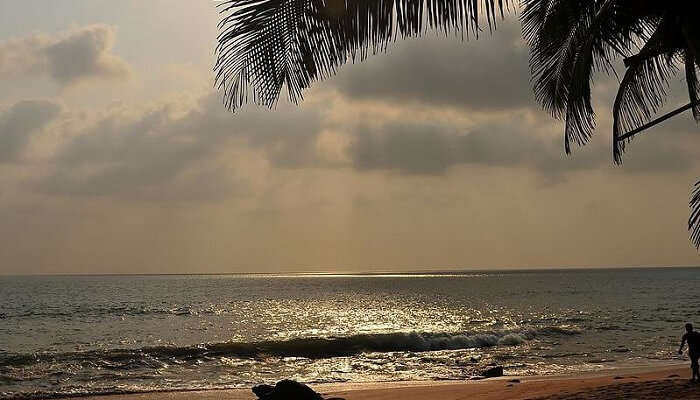 Goa is a town that is known for being the beach capital of India. Out of the many beaches, it is the Cola Beach that bags the title of being the most offbeat out of all. The natural beauty of this beach is something that none of the beaches or the liveliness of North Goa can match. Cola Beach has some of the most picturesque views to offer. The gentle and calm waves hitting the rocks, crashing on the golden grainy sand, and the cerulean blue sea spread as far as the eyes can see makes this destination as romantic as possible.

Location: South Goa
How To Reach: After reaching Goa, you won’t be able to find any buses till Cola Beach. However, there are taxis and cabs that can help you reach here. 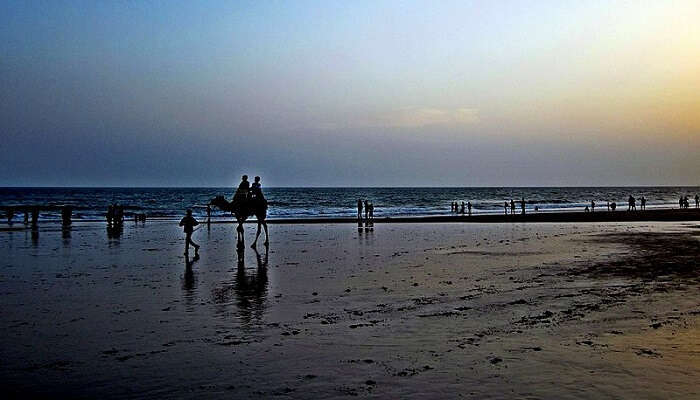 If you have a thing for exploring the roads less taken on a vacation, Mandvi Beach is your go-to. This Beach is sitting in the Kutch region of Gujarat and is home to the untouched natural beauty. Since the beach is hidden, it is not known by many, and hence, is far away from all sorts of commercialization. This beach boasts about a 400-year-old shipbuilding yard where even today, various ships can be seen getting manufactured. There are large wooden blocks that can be seen floating. It is one of the fairytale lands in the country.

Location: Gujarat
How To Reach: One can reach Gujarat via a flight. Then hire a bus or a taxi till Kutch. One will have to take a taxi to reach the beach.

Suggested Read: 31 Ideal Places To Visit In India In May For An Amazing Summer Vacay In 2022 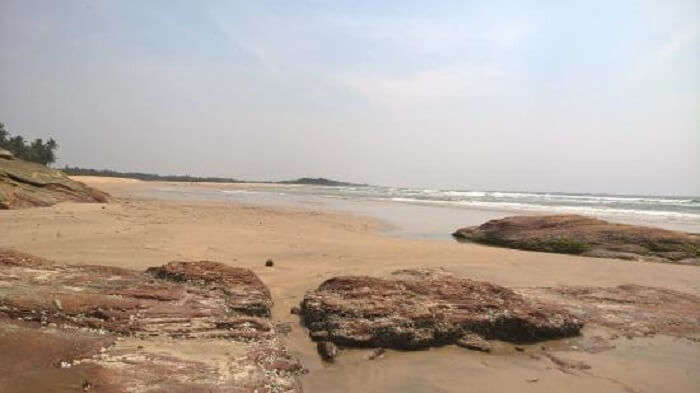 This is another one of the beaches that hardly anyone has ever heard of. Sitting in the coastal town of Byndoor in Karnataka, this beach is the perfect spot that adds to the beauty of Udupi. The breathtaking landscapes that it has to offer is truly awe-inspiring. This is the idyllic place to soak in the beauty of the perfect blend of temples and natural bounty. Moreover, it was also once voted the ‘Most Exotic Beach in India’ and for all the right reasons.

Location: Byndoor, Karnataka
How To Reach: The best way to locate Ottinene is to search for the Sai Vishram resort in Byndoor. It is marked on maps and is easier to find by road.

Further Read: 8 Union Territories Of India And Their Mystic Beauty

Mesmerized much with these unusual beaches in India? So which beach are you going to explore? So, plan a holiday to India with TravelTriangle. Let us know in the comments below. Do not forget to carry your cameras along to capture the beauty and true essence that these beaches exude.

Which are the unusual beaches in India where one can observe bioluminescence?

Bagram beach and Juhu beach are the two unusual beaches in India where one can observe the phenomenon of bioluminescence.

Are there any beaches in Goa with unusual characteristics?

Arambol beach in Goa is known for its unusual characteristic of sweet water.

Which is the most secret beach In India?

St Mary’s beach is one of the most secret beaches in India as it is only accessible through water ferries.

Where is the best beach in India?

The entire southern region of the country is home to the beaches that never fails to impress. From beaches in Gokarna to beaches in Goa, finding the best one out of these can get a little difficult.

Which is the cleanest beach in India?

There are a total of nine beaches that can be classified as cleanest beaches in India including Radhanagar Beach, Puri Beach, Calangute Beach, Rishikonda Beach, and many more.