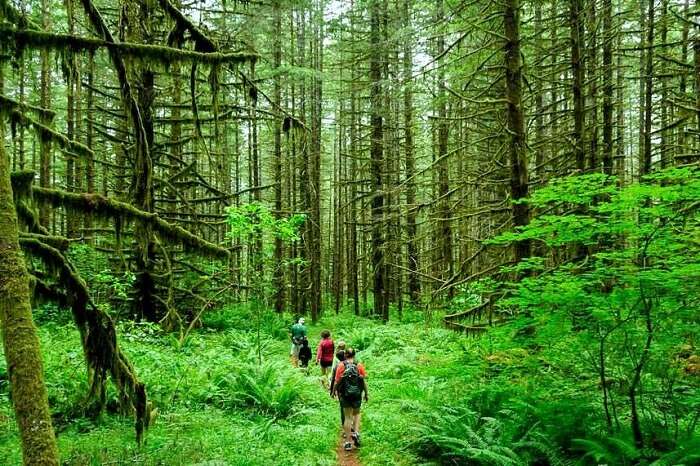 With a huge landmass, travelers are lucky enough to witness multiple rain forests in India.Explore some of the finest flora and fauna covered deep in the dense jungles Andaman, Assam, and the Western Ghats.

Very rarely do you find not one but three lush-green, dense, and lively rain forests in India at some of the remotest locations. These places have often fascinated wildlife enthusiasts from all the world that spend their entire lives in solving the fascinating mystery of the animal kingdom. Often infused with a large variety of tourist activities, rain forests in India are a popular source of income and footfall for the thriving tourism industry of that specific region.

Are you searching for the famous rain forests in India? Normally, a tropical evergreen forest in India can be clearly found at three places- Andaman Islands, Assam, and the Western Ghats, but a few sporadic stretches of land in Odisha, Naga Hills, and Manipur also have a similar type of landscape.

The best example of a tropical evergreen forest in India is found in the Andaman and Nicobar Islands. What makes this place all the more special is the large variety of flora and fauna. The Andaman Islands have rare plant and animal species that are believed to have passed on from other nearby countries such as Myanmar, Thailand, and Bangladesh.

It is believed that there over 2200 variety of plants grow in the Andaman Islands, making it the richest biosphere in India. These tropical rainforests receive on an average a total of 2000 mm of rainfall throughout.

The most isolated, dense, and unspoiled rain forests in India can be found in the Assam region of Northeast India. Although the forests are majorly in Northern Assam, traces of the same are found in Nagaland, Manipur, Mizoram, and Tripura. The rainforests in the Assam region are characterized by low-lying hills that have a dense forest cover throughout the year and an average height of 900 meters. This is the most popular rainforest in India.

Overall, Northeast India is famous for its moist sal monsoon forests that can be found in the Assam region as well. The region is home to many species of wild monkeys like Rhesus Macaque, Assamese Macaque, Slow Loris capped Langurs, Pig-tailed Macaque, Stam-tailed Macaque and Hoolock Gibbons. This rainforest in Assam also has a significant population of wild elephants.

Found mostly in Maharashtra and Karnataka, a stretch of moist deciduous forests can be found in the northern part of the Western Ghats covering a total area of around 30,000 square kilometres. The rich and dense forest cover starts from Southwestern Maharashtra and extends as far as Karnataka and Kerala in South India.

Another area rich in flora and fauna, Western Ghats are home to more than 1100 species of animals out of which more than 200 are endemic to that region. The Western Ghat forest land is also famous for containing the largest elephant population in Asia. However, a major concern in this area is the rapid urbanization of the forest land as according to the statistics, two-thirds of the original forest land has been cleared or deforested. This is one of the famous rainforests in India.

Suggested Read: 13 Places You Need To Visit For The Best Wildlife Experience in India

While Maharashtra and Karnataka are known as the North Western Ghats, it is Kerala and Tamil Nadu that comprises South Western Ghats Moist Deciduous Forests. The entire region of the southern country is covered in the lush green foliage and divided into two categories. The South Ghats are famed for being the most endemic and species-rich regions in the entire Deccan peninsula. The large animals such as Tiger, Gaur, and Elephants reside and roam around freely in this natural habitat of theirs.

The peculiar highlight of this Deciduous forest is the Neelakurunji that bloom every twelve years and cover the clean cut mountains in blue. This is definitely a treat for sore eyes. The rainfall in this area is anywhere between 250-800 cm when the season is right. The various species of flora in this forest includes Calophyllum austroindicum, Garcinia travancorica, Mesua ferrea, Gluta travancorica, Memecylon subramanii, and Diospyros barberi.

Suggested Read: 20 Tranquil Hill Stations In Kerala For A Rejuvenating Experience In 2021 Summer

5. Brahmaputra Valley Semi-Evergreen Forests – Home to the Most Alluvial Soil

Brahmaputra Valley is the pride of the North Eastern region of this country. While some parts are in West Bengal, Arunachal Pradesh, and Nagaland, this valley is majorly situated in the state of Assam. Valley is home to the Semi-evergreen forests and is home to the most alluvial soil in the country, and hence are considered as the most productive regions in India. Apart from the lush greens, this Valley is also known for being home to stupendous flora and fauna. This is a well-preserved rainforest in India.

The species in this valley have influences from the Indo-Malayan region. There are certain wildlife species in this forest that are limited to the banks of River Brahmaputra itself. From Golden langur and Hispid hare to Hoolock Gibbon and Stump-tailed Macaque, there is a wide variety of species that one can find in this Valley. In the present day, the land of this forest is being used as grasslands and for agriculture by the locals in and around the area.

Suggested Read: 18 Top Things To Do In Assam That Guarantee The Best Northeastern Holiday In 2021

Evergreen Forests are every nature’s lover delight. From being a nature escape to a treat to the eyes, these forests have something rejuvenating about them. A few of such marvels are sitting in Odisha of this country. Odisha forests might not be high on endemism or be species-rich, but it is still home to some of the most enigmatic species of both flora and fauna. This is one of the greenest rainforests in India.

Tigers (Panther Tigers), Gaurs, and Elephants are the species that can be witnessed in abundance here. The forest has its origin from the Gondwana land, hence, is home home to an ancient biota in these forests. The species of flora in this region are divided into three layers. The upper layer is a layer consisting of Michelia champaca, Bridelia tomentosa, and Artocarpus lakoocha. The middle layer has Polyalthia spp., Phoebe lanceolata, and Aphanamixis polystachya. While the last one is all about herbs and canes.

A tropical evergreen forest in India can be found in all parts of the country. Be it in the far eastern Gulf of Thailand or in the western coastal states in Karnataka or Maharashtra, mother nature has blessed the country with a lot of fertility. Another fact that wildlife enthusiasts need to keep in mind is that there are different benefits to traveling at different time periods to a rainforest.

The dry season generally opens up a lot of opportunities for hiking lovers as the trails get clearly demarcated due to the prevailing dry climate. The hikes become easy as the often muddy texture of forests completely dries out. For tourists, the wildlife is clearly visible and the only concern can be the searingly hot temperatures.

Whereas on the other side, the wet season brings a chance to view a lot of rare birds and animal species for people who wait patiently for their opportunity all-year long. Apart from that, the definition of a lush-green paradise can only be truly realized once a traveler sees a forest after a few days of rain.

Further Read: 15 Spectacular Hill Stations In Odisha That Are Underrated But Probably The Best For 2021

Rain forests in India are a blissful experience to behold. Covering the entire width of the country, these forests are a treat for nature and wildlife lovers. So, the next time you plan a trip to India and you are someone who loves nature, you know what to add to your list!

Are there any rainforests in India?

Tropical Rainforests of India, are found in the Andaman and Nicobar Islands, the Western Ghats, which fringe the Arabian Sea, the coastline of peninsular India, and the greater Assam region in the north-east Small remnants of rainforest are found in Odisha state.

Are there any jungles in India?

Tropical rainforests of India are found mostly in the north eastern corner of Assam,Andaman and the Western Ghats.

Which is the best forest in India?

What is a tropical rainforest and where is it located?

The largest rainforests are in the Amazon River Basin (South America), the Congo River Basin (western Africa), and throughout much of southeast Asia. Smaller Rainforests are located in Central America, Madagascar, Australia and nearby islands, India, and other locations in the tropics.

Which is the most dangerous forest in India?

Indian forests are the unexplored wealth of Indian wildlife. The Royal Bengal Tiger,One-horned Rhinoceroses and the most dangerous snakes “King Cobra” are few endangered species found in dense forest of India. In some parts of India the sacred forests exist and are worshiped by the tribal people of India.