Char Dham Yatra 2021: A Divine Gateway To Almighty And Nature 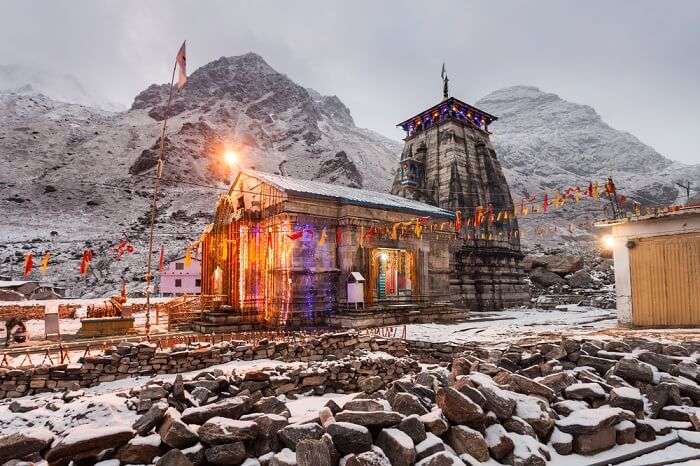 Best Time To Visit Char Dham Yatra In Uttarakhand In 2021

These four temples in Uttarakhand are only open for a limited time during the year. months. Due to heavy snowfall in winter, there is no accessibility to the region and the idols of Gods are migrated to temples in different places. Char Dham Yatra Uttarakhand begins every year in May and is open till October. If you are planning to visit all the four shrines at once, then you should plan a trip in these months. Pilgrims in huge numbers flock to these places to take blessings from Gods.

Char Dham Yatra In Uttarakhand: Where To Begin

Traditionally, Char Dham is conducted in the direction from west to east. So, route of Char Dham yatra is that you begin from Yamunotri, head to Gangotri, and cover Kedarnath and Badrinath in the end respectively. Here is the most popular route followed for the journey:

Each temple is dedicated to a Hindu deity. While Yamunotri and Gangotri are dedicated to river goddesses Yamuna and Ganga, respectively, Kedarnath is the humble abode of Lord Shiva. Then comes Badrinath Temple dedicated Lord Vishnu. Here is detailed information about each of the shrines.

Yamunotri is a holy shrine dedicated to Goddess Yamuna, the source of River Yamuna. The temple is nestled in the mountains of the western region in Uttarakhand. Apart from the shrine, there are also two hot springs where trekkers and devotees take a dip to relieve fatigue. One is Surya Kund and the other one is named Gauri Kund. The only way to reach this temple is on foot. Trek from Hanuman ki Chhati or Janki Chhati. Horses and palanquins are also available.

Must Read: 8 Best Places Near Uttarakhand That You Should Add To Your Itinerary Right Now!

Wait till you see the evening aarti at Gangotri Temple because there isn’t anything like it. Situated by the banks of Bhagirathi River, Gangotri Temple is where Lordess Ganga is worshipped. Just 18 km from the temple is the source of River Ganges – Gaumukh. The small town of Gangotri is centered around the temple. Surrounded by snow-clad mountains and river flowing by, the scenery of the temple is truly bewitching. Gangotri Yatra is not as difficult as Kedarnath Yatra and can be easily reached since the town is set around the temple itself.

Nestled in the mountains of Garhwal, Kedarnath Temple is dedicated to Lord Shiva by the banks of Mandakini. Both the location and architecture of the temple are breathtaking. It is so fascinating to know how the structure of this centuries-old temple remains unaffected from the floods. The last road head is Gaurikund. From this point onwards, you will either have to take a pony (or a palanquin) or also trek 14 km long if you have the stamina. People embark on Kedarnath Yatra every season to seek blessings of Lord Shiva before it is closed down in the winters.

Suggested Read: Know Everything About The Modern Meditation Kedarnath Cave Where PM Modi Spent His Time

Badrinath Temple or Badrinarayan is located in the town of Badrinath in the Chamoli district of Uttarakhand. The temple was founded by Adi Shankaracharya in the 9th century who found a Saligram idol of Lord Badri immersed in the waters of Alaknanda and later enshrined it in the cave of Tapt Kund.

The temple is characterized by a colorful facade and houses the idol of Lord Vishnu in black. Badrinath temple is easily accessible by road. However, you can also do a small 3 km trek from the village Mana, which is the last village on Indo-Tibet border.

Char Dham Yatra 2021 will begin from 26th April and will continue till 16th  November. Here are the opening and closing dates of the shrines.

Badrinath: 30th April 2021 – 15th October 2021 (Eve of Dusshera)
The opening date of Badrinath Temple or the shrine of Lord Vishnu has been decided on Basant Panchmai and will remain open until the Eve of Dusshera.

Kedarnath:  28th April 2021 – 6th November 2021
The opening date of Kedarnath temple has been decided on the Shiva Ratri and will remain open until Bhaiya Dooj.

Yamunotri: 28th April 2021 – 16th November 2021
The Yamunotri temple which is dedicated to goddess Yamuna is decided to open on the auspicious day of Akshaya Tritiya.

In case the road journey feels too much for you, you can also book a Char Dham Yatra of Uttarakhand by helicopter. If you opt for Char Dham yatra in helicopter you will be picked up from helipad in Dehradun and will be taken to all the shrines one by one for darshan. There are a couple of operators which offer a complete Chardham Package tour by helicopter. You can either book a whole tour or a helicopter ride to a specific shrine. If you only wish to do Kedarnath yatra by helicopter, then you can choose your package with the tour operator and decide your date of journey.

Keep these travel tips in mind if you are going on Char Dham Yatra this season. Knowing these trips in advance will save you

Suggested Read: 8 Exotic Villas In Uttarakhand Are Perfect For Your Next Mountain Getaway

Here is everything you will be needing to make your trek comfortable. Don’t forget to pack these things in your bag:
Clothing

Here are a few tips for your Char Dham Yatra tour which you must take care of while visiting the temples:

The Char Dham Yatra is an extremely holy and sacred tour for the Hindus. They are some of the top religious places in India. People from all over the country visit them when the sites are open making it one of the most important pilgrimage centers. Each site is devoted to a specific deity. It goes like this:

Yamunotri: Dedicated to Goddess Yamuna, the shrine is located at the high altitudes of the picturesque Rawai Valley

Gangotri: The shrine is dedicated to Goddess Ganga overlooking the river Bhagirathi

Kedarnath: The shrine is dedicated to Lord Shiva which is part of the Panch Kedar. Kedarnath is the northernmost Jyotirlinga

Badrinath: Finally, Badrinath shrine is dedicated to Lord Vishnu and situated on the bank of Alaknanda river

Thousands of pilgrims take steep walks and go through harsh weather only to spend a few moments of their life in the temples – shows the importance of the cultural influence. The route might be challenging but it does not falter people’s spirit and enthusiasm. The mesmerizing valley and scenic landscape does provide a sense of uniqueness to the Char Dham Yatra in Uttarakhand.

Suggested Read: 6 Haunted Places In Uttarakhand That Will Give You A Chill Down Your Spine On Your 2021 Trip!

How To Reach Char Dham Yatra

The only way to cover all the shrines at once is by road. There is no rail or air connectivity to these regions. However, there is a network of road transport in these regions. Buses and shared cabs are easily available for pilgrims and tourists. A cab will charge you around INR 3,000 – 4,000 for one side travel to Yamunotri. All four shrines are connected to each other by road.

By Air
The nearest airport is Jolly Grant Airport near Dehradun. You can take a flight from any part of India to Dehradun and then plan a road journey ahead.

By Train
If you prefer rail journeys, you can take a train till Haridwar or Dehradun, and then catch a bus or taxi to Gangotri. Public transport buses to Gangotri from Haridwar are also available.

By Road
Haridwar and Dehradun have direct buses from Delhi. You can either take a state transport bus or private Volvo buses to get to these cities. It takes around 6-7 hours by road from Delhi. You can also opt for Char Dham Yatra from Haridwar by car as you will number of taxis available on rent.

Further Read: Uttarakhand In June: Your Personal Guide For A Blissful Vacay In Summer 2021

Once you have completed Char Dham Yatra in Uttarakhand, you will feel blessed, gratitude, and eternal bliss. Plan a trip to Char Dham with your parents or if you seek spiritual awakening for yourself. This is the ultimate journey everyone should do once in their lifetime.

Q. What is the route of Char Dham Yatra in Uttarakhand?

Q. What is the best time for Char Dham Yatra?

A. The best time to take the holy Char Dham Yatra in Uttarakhand is from April to June. These months are considered to be the best time because the temperature varies between 7 to 20 degrees Celsius and you won’t face many difficulties along the route.

Q. How can we visit all the shrines for Char Dham Yatra at once?

A. The only possible way to visit all the shrines for Char Dham Yatra at once is by road. There is a strong network of road transport that connects all these places and it is how you will be able to cover all these places at once.

Q. What should I pack for Char Dham Yatra?

A. Pack woolens, a lot of them. It doesn’t matter in which month you plan for the Char Dham Yatra but you should always carry woolens. Carry a fleece jacket, trek pants, a sun cap, comfortable shoes, sunscreen, essential medication, and a first aid kit.

Q. Till which month can we take Char Dham Yatra?

A. The Char Dham Yatra starts in June and goes on till October every year. You should do it at least once in your lifetime.

A. Maharani Guleria of Jaipur built the famous Yamunotri Temple in the 19th Century. This ancient temple still stands strong.

Q. Where is Yamunotri situated?

A. Yamunotri is situated in the Uttarkashi district of Yamunotri which falls in the western part of the Garhwal Himalayas.

Q. How old is Gangotri Temple?

A. The famous Gangotri temple dates back to the 18th century and was built by the popular and powerful Gorkha General, Amar Singh Thapa. It was later re-built by the Maharaja of Jaipur.

11 Mystical Temples In Coimbatore: A Must-Visit On Your Trip To Tamil Nadu In 2021!

These 7 Resorts In Ramnagar Have Re-Defined Luxury And Comfort For You!

40 Places To Visit In Rishikesh On Your 2021 Religious Getaway