Feroz Shah Kotla Fort: A Complete 2022 Guide To The Unexplored Fort In Delhi! 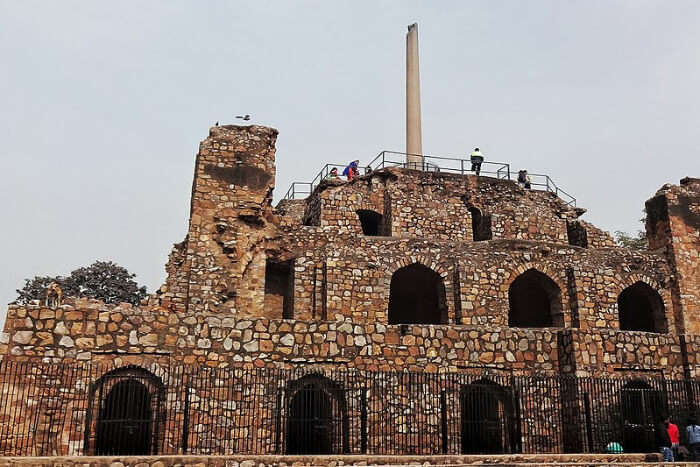 Cover Image Credit: Wikipedia
The national capital of India is without any doubt the heart of the country. You name it and you will find it in Delhi. Whether it be shopping complexes, markets, temples, museums, forts or galleries. You will mind a number of historic monuments in Delhi such as Qutub Minar, Red Fort, Feroz Shah Kotla Fort, and Humayun’s Tomb. The Kotla Fort is a must visit when roaming around in the capital city. Here is our complete guide for you that will help you in your visit to Feroz Shah Kotla Fort and provide you with some interesting facts about it as well.

Also known as Kotla, it is a fortress built by the Sultan of Delhi Feroz Shah, Tughlaq. The main reason behind building this fort was the shortage of water in Tughlaqabad. And this was the reason why Mughals decided to shift their capital from Tughlaqabad to Ferozabad. The fort became the symbol of the reign of the third ruler of the Tughlaq Dynasty. The fort remains crowded on thursdays as a lot of people come here for prayers. The reason behind this is the belief that Jinns ascend from heaven to the fort and fulfill the wishes of people. As you will visit the fort you will find, the Ashoka pillar to the left and Jama Masjid to the right of the fort.

Must Read: 20 Historical Places In Delhi To Explore In 2022 For A Walk Through Time

Best Time To Visit The Fort

Feroz Shah Kotla Fort in Delhi is open seven days a week. You can plan your visit in the months of November-February as these are the winter months in Delhi and it will be easier for you to do sightseeing in these months. Also, the fort remains crowded on Thursday due to certain myths.

It is one of the oldest forts in Delhi with beautiful architecture. It was basically built in an irregular polygon shape and was designed by Malik Ghazi and Abdul Hakk. The three important monuments that one can find here are the Ashokan Pillar, Jama Masjid, and the Baoli. Though the fort has turned more into ruins but yet it is visited by people in large numbers.

5 Places To Visit Nearby

As you will visit the Feroz Shah Kotla Fort, you can also pay a visit to various forts and monuments nearby. Delhi has a number of monuments. Here, we have listed top 5 historical monuments that you must visit.

Located near the Old Fort in Nizammudin, Humayun’s Tomb is a beautiful monument built by Akbar on the banks of Yamuna on the wish of the first wife of Humayun, Haji Begum. The tomb is surrounded by gardens and there is a beautiful waterfall on the entrance of the tomb. Do visit this old historic monument on your visit to Delhi.

Suggested Read: 50+ Incredible Places To Visit Near Delhi In 2022: Within 600 km From The Capital

Also called Lal Qila, the Red Fort in Delhi is made up of red sandstone. It has a great significance in the history of India. It is this very fort where the flag of India was hoisted for the first time on the day of independence. Also, it has a beautiful architecture that depicts the richness of Mughal culture.

Built by Mughal Emperor Shah Jahan, it is one of the largest mosques in India. An interesting fact about the mosque is that it has a courtyard which can house more than 25,000 people at a time. It costed around 1 million rupees to build it. The Badshahi Masjid in Lahore, Pakistan has a similar architectural structure to that of Jama Masjid.

Suggested Read: 20 Interesting Museums In Delhi To Explore The Indian History And Culture

Suggested Read: 12 Yoga Retreats Near Delhi Which You Should Definitely Visit This Summer!

Qutub Minar was built by Qutbuddin Aibak. It is the tallest brick minaret in the world. It is located in the Mehrauli region of Delhi. It is made up of marble and red sandstone and has been recognized as one of the UNESCO World Heritage Sites in the world.

Suggested Read: All You Need To Know About The Delhi International Mango Festival 2022

How To Reach The Fort

Delhi, being the capital of India, is very well connected to all the major cities of India. The nearest airport is Indira Gandhi International Airport at a distance of around 17 km. From the airport, you can easily get a taxi and reach the fort.

There are regular trains and buses from different parts of the country to Delhi. Major trains that run are Shatabdi, Kalkaji, Jan Shatabdi, and many more. You can also get an auto or cab easily from the railway station.

Further Read: 30 Reasons I Would Rather Be In Delhi Than Anywhere Else

Don’t forget to visit these various forts and tombs in Delhi including the Feroz Shah Kotla Fort. They depict the vast and historic culture of India very beautifully. So what are you thinking? Plan your holiday in Delhi with TravelTriangle and have hassle-free travel experience.

Who built the fort of Feroz Shah Kotla?

The great ruler Sultan Feroz Shah Tughlaq built Feroz Shah Kotla Fort in Delhi while he was the Sultan of this Delhi in the 14th century.

What is the new name of Feroz Shah Kotla ground?

Feroz Shah Kotla Ground is a cricket stadium and it was renamed as Arun Jaitley Stadium.

Who was Feroz Shah Tughlaq?

Feroz Shah Tughlaq was a great Sultan that ruled Delhi between 1351 to 1388 and built the popular Feroz Shah Kotla Fort.

Which materials were used to built Feroz Shah Kotla Fort?

10 Best Wedding Venues In Welkom For A Fairytale-Like Affair

10 Fancy Cafes In Pretoria One Must Visit To Sit Back, Relax And Enjoy Tasty Delicacies!