Gyaros: The Secret Prison Island In Greece That Could Be The Next Scuba-Diving Hotspot 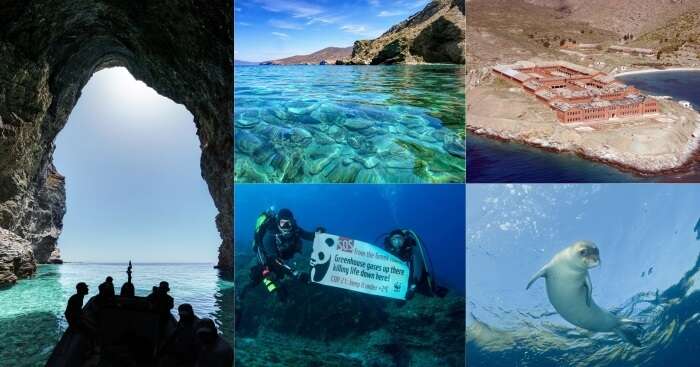 Somewhere in the Aegean Sea lies the Gyaros island – the secret prison island in Greece – that served as a major concentration camp during a major part of the second half of the 20th century. Ancient history and mythology also mentions the island that now remains abandoned and in very poor condition. But the island could reopen as a protected space for Mediterranean monk seals and a paradise for sea-diving.

Interested to know more about this secret prison island in Greece? Read on!

In the Aeneid of Virgil, Gyaros and Mykonos are said to be the two islands to which the god Apollo tied the holy island of Delos to stop its wandering over the Aegean Sea.

The island served as a place of exile during the early Roman Empire. However, even the criminals convicted of treason and extortion, such as Silanus, were not exiled to the island as Gyaros was said to be “harsh and devoid of human culture”.

But when the structures began to decay, the prison island was finally abandoned and used only as a target range for the Hellenic Navy until 2000.

Suggested Read: Things To Do In Greece For An Epic Mediterranean Vacation!

But things have changed now

It has been left abandoned and is in a derelict state

In fact, due to the unexploded ammunition that still lies around, human presence was limited to fishermen, hunters, and government-run organisations.

Currently, the island is off-limits for general public

Even fishing in its proximity has been forbidden by the coast guard. The only way to witness this beauty maybe from the sky or from the Greek coasts facing the island.

It was was declared a historic site of significant value

In 2002, the Greek Minister for Culture declared the island a historic site of significant value that deserved state protection.

Suggested Read: Other Magnificent Places To Visit In Greece

Equally rare is its natural environment

The island is homes to many unique species of flora, fauna, and aqua-fauna. This includes the endangered monk seal. Gyaros, along with the surrounding marine area of 3 nautical miles, was listed among the European Natura 2000 Network sites in 2011.

This ‘devil island’ could be transformed into an ecological paradise

In fact, there’s the ongoing “CYCLADES LIFE” project that aims to conserve & protect the marine biodiversity of the region. This project is being supported by the WWF environmental organization.

And the island could easily be the next sea-diving paradise

The island is blessed with stunning diving landscapes and would serve as an excellent option for scuba-diving, snorkeling, and deep-sea diving.

Suggested Read: Other Diving Spots in The World That’ll Make You Want To Get PADI Certified NOW!

Further Read: 10 Places To Visit In Mykonos For An Ideal Vacation In The Pretty Greek Island!

The island could serve as an excellent soft tourism destination for nature lovers, adventure junkies, and historians. But with many unexploded missiles left on the island, a lot of work needs to be done before the island could welcome visitors with open arms.

10 Picture-Perfect Singapore Islands For An Enchanting Vacation In 2022

15 Things To Do In Kovalam In 2022 That Offer The Best Of Backwaters, Beaches And Ayurveda!