Winters In Turkey 2021: A Land That Turns Into Heaven 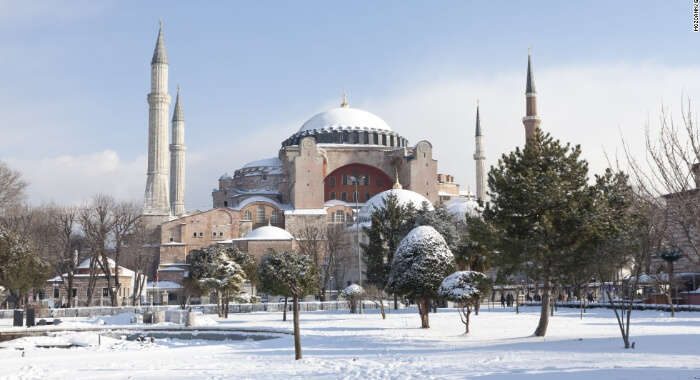 “The sound of Skiboards sliding on the snow, a conclave of amateur mountaineers and scattered figurines of snowmen. All these are lesser known persona of Turkey. Winters in Turkey are definitely worth an experience. Some even say that Turkey is better visited in the colder months.

If you are looking for a totally unique skiing experience, then you are in for a real treat if you are planning to spend your winter in Turkey. There are several ski areas in Turkey along with world-class heli-skiing. Besides this, cherish other winter sports too and witness the authentic local life. Right from competitively priced hotels to cheap round trip flights, get prepared to have your mind blown away.

Turkey winter season continues from December till February. It could get chilly and even rainy at times. So, if you do not find frequent showers of rain and nippy weather, then you must definitely go for it. In case you are wondering if there’s snow in Turkey, then you will be delighted to know the answer is yes.

Why Winter In Turkey?

Turkey has three different climate zones due to its immense size. The winters in Turkey starts from mid-December and ends in mid-March. Different regions of Turkey experience different quality of winter. It can range from mild to snowy or from rainy to dry cold. Temperatures may vary from -13C to 24C depending upon the climate zone. Erzurum is the coldest place in Turkey during the season.

Turkey has always been perceived as a summer holiday destination, but this country is a good choice for your winter getaways too. Turkey is quieter in winter, so you won’t have to deal with a lot of tourist crowd. This also brings us to the second most important point, which is expenses. The place is cheaper, especially the accommodation and your choices are also wide. Another important aspect of your trip is experiencing the culture of this Turkey. During winter, because of the less crowd, you will have better access to public places and people.

Book a round trip flight to your favorite destination in the major on-season and you will witness outrageously priced flights, airfare and hotel rooms. The same goes for Turkey. Book your flight to Turkey deep in the dead of winter (in February month) and traveling will be incredibly cheaper as it’s the major offseason. Hotels, tours, restaurants and activities in Turkey can be up to 75% more affordable than the expensive months of the year.

If there is one thing that most people hate when traveling, it’s the crowd. They love to travel and see the world but they silently wish if they could do without the crowds. If you want to travel sans the large crowds of people and tourists then Turkey is the perfect location for you in winters. No crowds of annoying people! No cruises! Turkey is an empty place in the winter months. This means less busy places and no waiting in lines. Tip – Visit the backstreets of Istanbul to experience true solitude. You will find the streets teeming with cats mostly and no crowds.

Must Read: 10 Mosques In Turkey That Are Much More Than Just Prayer Halls

Most people envision Turkey as a destination bustling with rocky beaches, rustic-chic villages, breathtakingly beautiful streets and endless sunshine but the place has many other good sides. In the winter season, the country is hit by heavy snow now, and the experience is not less than magical. All you get to witness is an absolutely serene and peaceful ancient land, completely bereft of people and landscapes adorned with fresh and soft snow.

A visit to Turkey in winters make you witness the incredible Greco-Roman sites when the crowds and heat evaporates. You can also head to the travertine hills located above the city of Antalya and wander through the ghostly sarcophagi of Termessos. Winters here gives you a perfect chance to indulge in the history of this stunning location.

Suggested Read: Snorkeling In Turkey: 10 Places Where You Can Have This Thrilling Experience

One can relax and revive in one of the best steam-filled historic hamams, located in Istanbul. If you want to check out the best Hamam in the town then don’t forget to visit this mystic 16th century Kılıç Ali Pasha which was recently renovated for a multi-million-dollar to restore its original glory. This can be one of the best escapades of this winter.

If you are an adventure lover and want to indulge in skiing, then Turkey in winter is a good choice for you. You thought you can enjoy snow and ski only in Europe. During winters Turkey offers ample snow and ski activities. There are amazing ski resorts in Uludag, Izmit, and Palandoken. These resorts can surely compete with Switzerland. This together answers your queries of ‘where to stay’ and ‘what to do’ in Turkey. Make sure you follow the safety rules while skiing and also carry or hire the skiing gears.

3 Must See Places During Winters In Turkey

With a unique natural environment and tranquility like no other during winters, winters season is one of the best seasons to travel to Turkey. Here are some of the best places to visit in Turkey during the winter season:

Formally known as Pamphylia, Antalya has hordes of historical sites, lengthy coastlines, and mesmerizing landscapes. Antalya aquarium is famous for being family-friendly. You will find a myriad of things to do in Antalya to entertain yourself.

Get rid of the fatigue of the day in the famous Turkish bathhouses in Antalya region. Antalya is famous for old harbors with yachts and beaches with big hotels. This Turkish resort city totally deserves to be on the top of every itinerary of your winter Turkey holidays.

Cappadocia is one of the best winter destinations in Turkey. It is indeed a winter wonderland. Due to prehistoric volcanic eruptions, the soft Tufa rocks have formed shapes of their own. These resemble magical chimneys also known as ‘fairy chimneys’. You can live the life of Fred Flintstone by staying in an authentic cave hotel in Cappadocia. It is one of the most amazing places to spend new year in Turkey.

The amazing site includes Bronze Age homes that were carved into the valley walls and the rock-face churches. This place is also popular for its hot-air balloon scenes. The entire valley looks picturesque from the aerial. If you like something different and weird then Cappadocia qualifies for your wishes.

It would be a crime to not mention Istanbul as a winter destination in Turkey. This major city in Turkey has many landmark sites like Hagia Sophia, Blue Mosque, Topkapi Palace and ancient Churches. Other world popular historic sites include the Byzantine Hagia Sophia and the open-air Hippodrome from the Roman-era. Shop in local markets, explore the prehistoric era and the east-west fusion. Regardless of the weather in Turkey during winter, this place gets visitors from around the globe, throughout the year.

Temperatures during winters: 2C to 14C

Further Read: Turkey In September: The Ultimate Guide For Exploring The Land Of The Legends!

Visiting during winters has its own pros. If you want to rid yourself of the hustle and bustle in your present life, a trip to Turkey is your best bet. Lesser crowds also mean more quality interaction with locals and a much better authentic experience. Cities like Istanbul, Cappadocia and Izmir are better explored during winters.

Q. Can tourists travel to Turkey during the Coronavirus epidemic?

A. Yes, Turkey has received absolutely zero cases of this virus. It is also taking strict measures like screening tests at airports to ensure that the country does not get affected by it. Moreover, travelers from China are not allowed to enter the country. So, tourists can travel safely to this country.

Q. How cold does Turkey get in the winter?

Q. Which is the coldest month in Turkey?

A. Though the temperatures vary across Turkey, the coldest month in Istanbul is February.

Q. Can Euros be used in Turkey?

A. Yes, many traders accept Euros in Turkey, so you can use Euros here.

Q. What is the coldest month in Turkey?

Q. Does Turkey have snow?

A. Yes, Turkey faces snow and heavy winter in the eastern part of Turkey, which is also the coldest part of the land. The black sea region and middle Anatolia is pretty cold in winters too. The Marmara region has cold winters, but it doesn’t snow that much.

Q. What do you wear in Turkey in winter?

A. Here are some suggested wearing to face winter in Turkey-
1. A Winter coat or insulated outdoor jacket.
2. A light waterproof/rain jacket.
3. 4-5 Long-sleeved shirts.
4. 2-3 Skirts to be paired with thick stockings/leggings and ankle boots or flats for women.

A. Antalya – Currency. The currency in Antalya is the Turkish Lira. You may find other currencies such as dollars or euros are accepted, but generally, the best value will be found by using Turkish Lira, especially in the markets and souks.

Q. Does Turkey have 4 seasons?

A. Winter season in Turkey (December, January, February) can be chilly, rainy and snowy, with occasional cold but sunny days, everywhere except the southeast, which remains temperate, but lower prices and fewer tourists are compensations.

Q. How much cash can I take to Turkey?

A. There are no limits on the amount of money you can take into Turkey. If you arrive from a country outside of the EU with 10,000 Euros or more (or the equivalent amount in another currency), you have to sign a declaration form.

4 Best Wedding Venues In Istanbul For An Out-Of-The-World Experience!

Top 15 Istanbul Beaches Where You Can Have Fun And Frolic In The Sun In 2021!

Hang Gliding In Turkey: Two Best Spots To Fly In The Sky Like A Bird!