Beaches In Greenland: A Perfect Guide To Get All The Beach Vibes In The Freezing Land 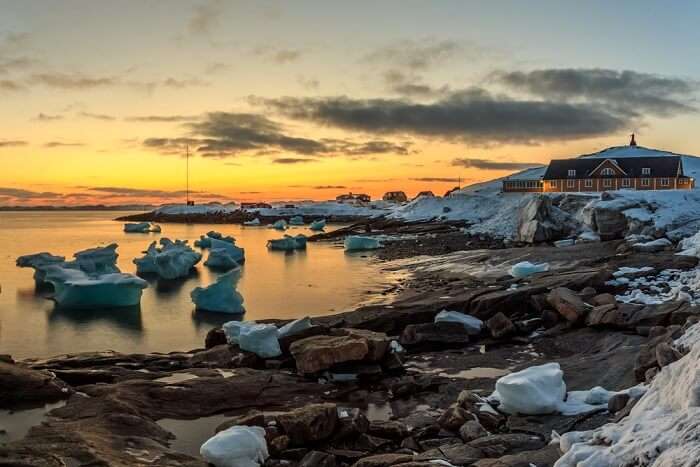 The largest island country in the world, Greenland is known for its polar ice caps and rare Arctic wildlife. Though the maximum landmass is covered in snow and ice desert for the most part of the year, Greenland manages to lure tourists from around the world to experience the Arctic landscape and lifestyle. Greenland is surrounded by two major oceans providing the country with several alluring water bodies. Beaches in Greenland are one of the major tourist destinations in the country as it allows one to get up-close with the marine mammals. Read through this referential article to get an overview of beaches in Greenland.

The ideal time to visit Greenland to enjoy the beach environment is during the spring and summer seasons. Summers are cold but filled with sunlight and a lot warmer compared to the winter temperatures. Unlike in other parts of the world, beach life in Greenland is not all about sunbathing and surfing. The maximum temperature in Greenland during summers average around 10℃. It is the time when the Arctic wildlife come out of their habitat looking for some vegetation. If one wants to experience the rare natural phenomenon called the Midnight Sun, summers are the best time to visit Greenland.

5 Best Things To Do In Greenland

So, while you’re still wondering where to head in this charming snow-covered land of the North, make sure you cover these best ones for an amazing holiday experience.

Located in the west coast of Greenland, Disko Bay Beach remains the number one priority for people for sailing and whaling. Also known as the Siorarsuit Beach, this beach is surrounded by mesmerising red sand cliffs and black sand shores. With little or no greenery even in the summers, this beach stands apart for its great aquatic inhabitation and rare winter interest. It is probably the only Greenland beaches open for tourists even in the winter season. Winters bring along a few explorers and adventurers to the beach not to set sail but to ski over the frozen waters. It is a popular winter sport in the country and is thoroughly enjoyed by many. Summers allow one to spot the polar bears that drift along the coast on floating ice caps.

Location: Disko Island, Greenland
How To Get There: The Siorarsuit Beach is an hour and a half ride away from the famous town of Ilulissat. One can reach the island through a ferry in the summers but travelling in winters involve dog-sledding.

Considered as one of the best beaches in Greenland, Rocky Beach is located just a few kilometres away from the capital, Nuuk. Although the beach is inaccessible for the most part of the year, summers bring many guided boat tours to the beach. As the name suggests, the beach shores are covered in boulders and stones which makes sunbathing not feasible. It is one of those Northwestern beaches of Greenland that is famous for whale watching and kayaking. One can spot whales, seals and walruses across the shores in the summers. The town and villages nearby depend upon this beach for their livelihood. One should try their seafood soup and whale meat dishes when visiting Greenland.

Location: Ukkusissat, Nuuk, Greenland.
How To Get There: The beach can be reached either by dog-sledding or helicopters.

Suggested Read: 10 Trails for Hiking in Greenland That Every Adventure Lover Must Try

Southern Greenland gets the name Banana Coast for its resemblance of the tropical weather. Although Greenland does not have a tropical climate, the southern coast of Greenland is much greener and full of vegetation compared to the other parts of the country. One can find various colourful and predator birds flocking around the coastal area. The coast is also a wonderful habitat for species like reindeer, musk ox and the Arctic fox. The seaside is always filled with seals and walruses lazing about on the shores. One can take a ferry for whale watching or opt for a kayaking adventure in the sea.

Suggested Read: 12 Places To Visit In Greenland That Will Tempt You To Revisit The Country

Apart from the gigantic mammal, Greenland shores are always filled with walruses and seals. Kayaking is the best activity to take part in if one wants a closer look at the sea mammals. Walruses are a subtype of seals differentiated by the huge tusks. The tusks play a defensive role and thus one should be careful not to get too close to the species. Apart from the land mammals, the coastal skies can be seen covered with predator birds like the white-tailed eagles and beautiful harmless species such as the Auk.

Apart from the few known Greenland beaches, the country is suffused with many freshwater rivers and hot springs. Popularly known as fjords, freshwater rivers form a gorge in the mountain ranges and flow across the country. Most of the fjords are formed as a result of the glacial melt, especially during the summer season. The most popular fjord is the one located in Ilulissat and is easily accessible to tourists.

Greenland is also known to house a few hot springs amongst which Uunartoq near Ilulissat is the most visited by world travellers. One should even make sure to visit the tranquil Blue River that forms a valley in the Petermann Glacier and resonates a magical blue light across the valley. Kayaking is a good way to explore the Blue River and to spot polar bears.

Ideally, the best way to reach this Arctic country is by air. Greenland has a couple of international airports, one being the capital-Nuuk which connects the country to the rest of the world. There are no direct flights available to Greenland from any part of the world. Considering the country’s limited resources, Air Greenland flies to and fro to either Denmark, Iceland or Canada. Thus, one can get a direct flight to either Copenhagen or Toronto and then catch the connecting Air Greenland or Air Iceland flight to Greenland. Alternatively, Europe and North America have a cruise line to travel to Greenland.

Further Read: Shopping In Queensland: 10 Best Places To Splurge & Treat The Shopaholic Within

Although the country is surrounded by two large-scale oceans, Greenland is not an ideal beach destination owing to its cold arctic temperatures. Most of the coastal regions are inaccessible to tourists or are yet to be discovered. This limits the world from being aware of the beaches in Greenland. However, summers provide the best opportunity to see the coastal lifestyle of the Greenlandic people. Plan your international trip and give your luck a chance to spot the most amazing polar bears.