12 Places To Visit In Greenland That Will Tempt You To Revisit The Country In 2021! 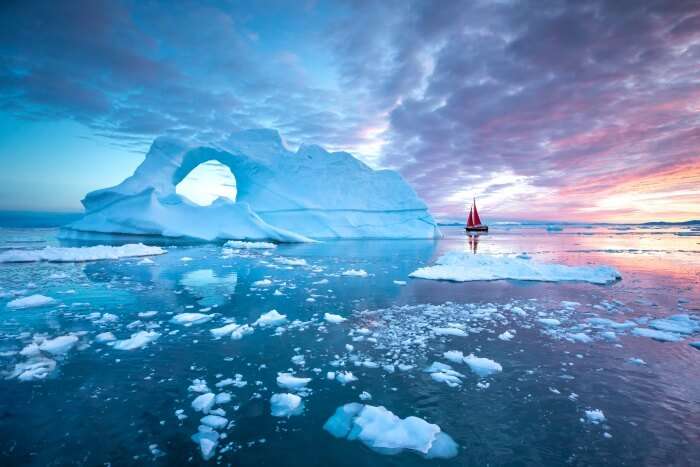 Owing to its location between the North Atlantic and Arctic Oceans, close to the North Pole, Greenland is mostly covered in ice. As a result, its marginal populace (estimated to be 56,171) lives along the fjord-lined coast in the southwest. Its location makes it subject to beguiling phenomena such as the midnight sun during the summers and the northern lights during the winters.

Greenland is a Danish territory, with Denmark having granted its home rule in 1979. Since a majority of the population is Inuit, the culture of Greenland is mainly dominated by Inuit beliefs and practices. However, the rest of the populace includes the descendants of Norse colonists and is associated with the Lutheran Church. Therefore, it is a mix of traditional Inuit and Scandinavian cultures.

17,000 people are settled in the capital city of Nuuk. Subsequently, icebergs and glaciers make for the highlight of this country and contribute to its ethereal beauty. The inhabitants of Greenland are the various immigrated people who possess unparalleled abilities that help them survive unusual temperatures. There are quite a number of places to visit in Greenland that will make your vacation in this country worthwhile.

12 Places To Visit In Greenland

Covering all the spots is never possible while you are vacationing, therefore the list below will help you cover some of the best places to visit in Greenland that will let you experience this country in all its exquisite glory.

Announced as a UNESCO World Heritage Site in 2004, the Ilulissat Icefjord stretches 40km from the Greenland ice sheet to Disko Bay. Jakobshavn Isbræ, the most productive glacier at the Northern Hemisphere, is located at the eastern end of this fjord. Almost 20 billion tonnes of icebergs get passed out of the fjord each year after they’ve melted.

To witness the gorgeous vistas that this ever-changing and ephemeral site has to offer. you can either go for a hike, hire a boat, or you can take a helicopter tour to get an aerial view.

Image Source
Occupying the western coast of Greenland, this bay has historical significance, as it was at this place Erik the Red, a Norse explorer first started a settlement in 985 AD. The Inuits, however, are said to have encountered Disko Bay even earlier than 2400 BC.

The nutritious waters make it a habitat conducive to the survival of a wide array of marine lives such as benthic and pelagic fishes. During springtime, you can even catch a glimpse of the bowhead, humpback pilo, killer and narwhal whales.

It is also the site where you can view gulls, kittiwakes, cormorants, eider ducks, and migratory birds such as harp, bearded, ringed and hooded seals. The tours would last either a three hours or as long as an entire week.

Image Source
Located in Ilulissat, this museum, dedicated to the memory and contributions of Danish explorer Knud Rasmussen, was also his birthplace and is one of the famous places to visit in Greenland. It was also where Rasmussen spent his time away from the hustle and bustle of the city to immerse himself in his work and the tranquil solace the environment offered.

Built in 1917, the architect, Helge Bojsen-Møller, was inspired by the style of English cottages. After gathering stones from many different places, Memorial Cairn was raised on a hill overlooking the house in honour of Rasmussen’s achievements.

Suggested Read: 10 Amazing Things To Do In Greenland You Would Not Want To Miss In 2021

Image Source
Measuring over 2,000,000 cubic kilometers, the Greenland Ice Sheet is a behemoth-like spread falling below Antarctica, as the second largest ice sheet in the world. If the entirety of this vast expanse were to melt, sea levels would rise by a frightening 7 meters!

This one’s surely going to give you goosebumps. You can have a bird's eye view of the sheet in a helicopter to admire its beguiling beauty or walk on it in Kangerlussuaq if you wish to admire the ice up close in all its different shapes and sizes. You must add this on your list as this is one of the interesting places to visit in Greenland.

Suggested Read: Shopping In Greenland: 6 Kind Of Items You Must Not Leave Greenland Without

One of the top places to visit in Greenland is Katuaq which was designed by Schmidt Hammer Lassen. This modernist structure is L-shaped. It contains two auditoria. The bigger auditorium can seat more than a thousand people and is, thus, used for showing films or plays and hosting concerts or conferences. The smaller auditorium can accommodate 508 people.

The building has a backward-leaning, Northern Lights-inspired screen that overlooks Nuuk’s central space. It is raised above the ground and made of larch wood on both sides. It was constructed in coalition between the Nuuk Municipal Centre, Nordic Council of Ministers, and the Greenland Home Rule Government in 1997.

Suggested Read: 14 Awesome New Year Parties In USA That You Must Be A Part Of

6. ‘Church Of Our Saviour’ Or Nuuk Cathedral

Image Source
Consecrated in 1849, this church is a prominent site where most of its population gathers to celebrate National Day and other festivals. Its distinctive red colour and spire make this structure so simplistic yet endearing.

In front of the cathedral is a bronze statue of the organist Jonathan Petersen and on the hill overlooking the church is a Statue of Hans Egede, both of which are prominent landmarks. The church, thus, reflects the Lutheran populace that constitutes a minor demographic of the country.

Image Source
The Greenland National Museum and Archives was one of the oldest museums in Greenland built in the mid-60s. It also accommodates the neighboring cooper’s workshop and a blubber vats’ display. Its main attractions are the mummies of three women and a six-month-old child dug up at Qilakitsoq. Greenland National Museum And Archives are also one of the most frequented tourist attractions in Greenland. It also has on display several other archaeological artifacts such as excavated tools and provides an insight into ruins, buildings, and more. It also provides information about anthropological phenomena.

If you are looking for one of the most beautiful places to visit in Greenland, then there’s one sight you must witness - ice breaking off of Eqi glacier. A boat takes you close enough to experience this cascading spectacle, it is quite an event! The Eqi Glacier ends in the fjord 80 km north of Ilulissat.

Its natural beauty is unparalleled and sure to leave you in awe of not just its own but the nature’s magnificence as a whole! The little fishing boats in which the tours are offered, go through the cold water right into the shadow of the glacier for you to witness the collision of ice and water.

Suggested Read: 10 Top-Rated Casinos In USA To Try Your Luck And Roll The Dice!

9. Mother Of The Sea

Located in the water next to Nuuk Cathedral, the “Mother of the Sea” sculpture was designed by a popular Greenland artist, Aka Høegh. It is a reference to an Inuit folklore and legend about the Mother of the Sea who makes sure that the fishermen do not take more than they need.

The legend is therefore a parable of greed and subsequently its moral is embodied in this granite sculpture.

Image Source
It is a home to several diverse species of marine and terrestrial fauna such as, polar bears, walruses, musk oxen, arctic hare, arctic fox, ringed al, bearded seal, harp seal, Beluga and narwhal whale and collared lemming.
Several species of birds are visible too, such as, barnacle goose, common eider, gyrfalcon, raven, etc. It was established in 1974.

Image Source
Occupying almost a 110 kilometers off the Greenland coast, the Scoresby Sund is the largest fjord system in the entire world. Formed by years of seismic ice movements and floating icebergs, this is a must-visit place in order to experience the beguiling charm of the Arctic regions.

If you choose to go on a polar expedition of the Scoresby Sund, you will surely witness polar bears and the narwhal whales swimming in the oceans. For the bird lover in you, there’s also a variety of seabirds, such as guillemots and puffins. So, do not forget your binoculars.

Location: Off the eastern coast of Greenland, in the Greenland Sea

Image Source
There isn’t a dearth of hot springs in Greenland but the only ones that are warm enough to bathe in are the ones present in Uunartoq. You can lie in its hot waters to relax while enjoying the pristine beauty of the serene natural landscape as you replenish your body and mind at the same time.

The only man-made structures present on this island are the gangways and a cottage for you to change in.

Location: Lies halfway between Qaqortoq and Nanortali; is accessible during the day via boats.

We hope that the places to visit in Greenland listed above will enable you to experience the pristine beauty of this country. Each place you visit during your international vacation in Greenland will leave you with pleasant memories that shall last a lifetime.

Frequently Asked Questions About Places To Visit In Greenland

Is Greenland expensive for tourists?

Are there any trees in Greenland?

Yes, there are trees in Greenland.