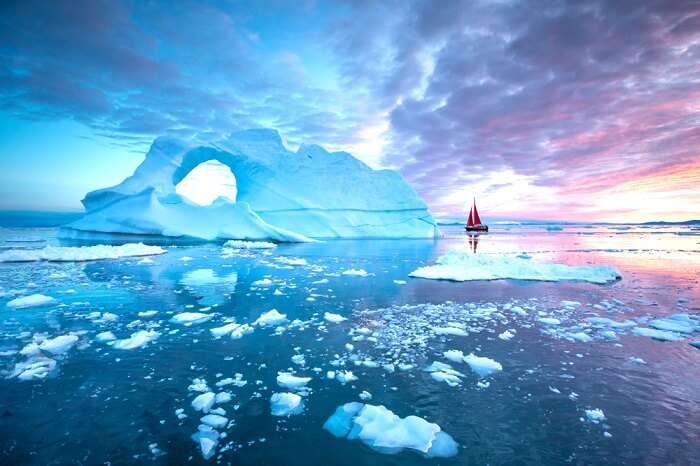 A country within the Kingdom of Denmark, Greenland in summer is almost like stepping into a different world. With a meager population, open lands, mountains, and icebergs, it is no less than a fictional dreamland. The country is a beautiful amalgamation of two cultures while belonging physiographically to North America, its heart and soul aligns with the European culture.

Contrary to its name, much of green is more white actually. With more than two-thirds of the area covered in ice, be prepared to be enthralled by this heaven of a place. The country has an abundance of adventure sports due to a heady mix of mountains, ice, and unfenced wilderness.

Due to its geographical location, Greenland predominantly has arctic climatic conditions. With rough terrain comes difficult weather, therefore the summers are much preferred over the harsh winters. Winters goes from December to March and is marked by short days and are extremely dark. Even though it sounds dreary, but in reality it a good time to enjoy the snow coat, dog sledding, and the northern lights.

Greenland in summer is much more pleasant and accessible. Lasting from June through September, it is a magical time to be here. With a plethora of sunlight during the summer, this place is where time loses its essence. Light stays till the early hours of the night, and so do the people. Extremely long and bright days make it the perfect season to visit this surreal place.

Top 13 Places To Visit In Greenland In Summer

After having said enough about the place, its weather, and geography, let’s take a look at all the things one can do in the summer weather in Greenland.

Located in the west coast of Greenland is this fastest and most active glacier of the world. The Icefjord is a UNESCO World Heritage Site since the year 2004. This place is known all over the world for the ethereal spectacle that people get to witness here. The point at the coast in Disko Bay is where the magic takes place. You must be wondering what this magic really is. It’s the ‘calving’ of icebergs, which is when the parts of icebergs break off and fall into the water, being slowly carried away with it.

The largest glacier known as the Sermeq Kujalleq is the most spectacular of them all which feeds into the coastal waters. It is a rare occurrence, but still visible to the people if they are lucky enough to have that impeccable timing. The spectacle is visible from the land and hordes of tourists visit here to witness this surreal happening.

Must Read: Norway Travel – The Land of Midnight Sun Is Calling

Hot springs are a common phenomenon in Greenland, with a myriad of them available in every nook and corner. But the ones here in Uunartoq are different from all of them. Uunartoq Qeqertaq translates to ‘very hot island’. Uunartoq is an uninhabited island, tucked away from one’s busy life. Located in the southern part of Greenland, the island is easily accessible by boats from the two neighboring towns of Qaqortoq and Nanortalik. When you reach here, you will find this picturesque image of heated springs, resting in the laps of stunning icebergs and mighty mountains.
If you are not too fond of stepping in, the view itself is enough to get you your efforts worth. But if you are the adventurous kind, ready to test the waters, then you are in for a treat. The water has a perfect temperature for a soothing bath and to unwind all your stress. The natural setting, mildly hot water, and the frequent sighting of whales is the only therapeutic experience you need.

Must Read: 10 Amazing Things To Do In Greenland You Would Not Want To Miss In 2019

Hiking has become yet another significant adventure sport in Greenland during summers. Greenland is the last untouched territory by humans, or to say least touched, therefore making it even more exciting to step into unknown territory. With surreal postcard-like views, including mountains and icebergs, it is the best way to get away from the busy life and delve into the beauty of nature. The hiking trails here in Greenland in its town of Tasiilaq are too many and vary according to the length; while the shortest and most popular take a day to finish, the longest one near Sisimut takes 8-9 days to complete.

Greenland in summer witnesses a very surreal phenomenon. The midnight sun every summer challenges the basic essence of time. Here the sun doesn’t set till the early hours of the night. Popularly called as the midnight sun, the sky is bright and well in sight throughout the day. You can find people and children enjoying the warmth of the sun, giving the impression that the city never sleeps. Although it is visible all over the country, it is the most prominent in the north of the Arctic Circle.

The locals believe that the best way to take in the complete beauty of the place is through a ferry. The country majorly depends upon the ferries for transportation, and it is easily seen in how they carry more of passengers over visitors. Unlike any other ferry service, the one here called as Sarfaq Ittuk is designed in such a way that it provides a completely authentic experience of the place. You can sit and dine with the locals at the communal cafe and get to know more about the deep-rooted culture and heritage of this place.

The people here in Greenland have an eclectic taste in food, which ranges from literally everything available at land as well as in the sea. With nature playing a predominant role here, agriculture too is an integral part, making the locals very passionate about the food. Do try the amazing Ulo restaurant when in Greenland and just enjoy the gastronomic magic that the place can offer.

If you think Greenland is all about ice and icebergs you are mistaken. During the onset of summers, with the ice melting, the locals indulge in a big celebration. This festival, which is sort of a farewell to winters, is celebrated in the month of April. It is basically a dogsled race which happens in Ilulissat and lasts for about 3 days. It is a very widely celebrated festival celebrated in summers in Greenland, with over 100 sleds and 1,000 dogs participating in it. What makes it even surreal is the midnight sun, burning up for over 16 hours every day.

Taking place both in Disko Bay and Ilulissat, this festival is dedicated to the appreciation and celebration of art. Being held in August every year, it is a relatively new concept in Greenland. The festival has events pertaining to modern theatre, music, and other performances. The performances here are experimental and different, giving a chance to all sorts of talents. The people are made to stay in camps just outside the village since much of the programme is held in the open area. The visitors have an enthralling experience of being out in the raw nature and beauty of Greenland.

Ideally curated for the families and full of pure entertainment, the Qooqqut festival is a tribute to the love of music that the locals carry. It is a weekend music festival that takes place in the capital Nuuk at the Nuuk fjord system. The place is beautifully decorated with tents and canopies, emitting a very aesthetic vibe that pulls hordes of people every August or September. To reach the location of this festival, the ferries are the easiest possible way.

Started in the year 2014, this festival has only been held for four times in the capital Nuuk. The major aim of hosting it is to promote the local food among others. It motivates the locals as well, to use more of the local produce and to make the country self-sufficient in terms of food. People of all walks of life gather here on a September weekend to celebrate this great initiative.

Further Read: Laugavegur Trek: A Detailed Guide To Trek Through A Breathtaking Trail In Iceland

Greenland is a magnificent country far beyond the usual humdrum of life. With untouched places, glorious mountains, gigantic icebergs and the most heart touching locals, this place is bound to leave everyone under a spell. To all those who limit this place to an ice cold uninhabited place, just remember that the country has a lot more to offer. So shed the inhibitions and travel to Greenland in summer to make the most of it. Book your trip with TravelTriangle to enjoy a hassle free trip!

Q. Does Greenland have summer?

A. Greenland is an Arctic country and it has an Arctic climate with average temperatures that do not go above the 10° C (50° F) which is the warmest summer months.

Q. What is the best time to visit Greenland?

A. The summer in Greenland is from June to September and is very unique. Since the days are long and bright, the best time to visit if you want to go hiking and you can involve in lots of outdoor activities. It is also the time when you can witness the midnight sun in the type of an Arctic summer.

Q. Does Greenland have 4 seasons?

A. Greenland experiences four seasons and it is the winter and summer months that draw the most travelers to this country. The main attraction during Greenland’s freezing Arctic winters is the Northern Lights which go across the sky from September to April when the sun has set.

Q. Is it always cold in Greenland?

A. Greenland is one of the coldest countries in the world since almost the whole year the temperatures are always zero degrees Celsius. Greenland is also surrounded by the seas that are permanently frozen.

Q. How long is a day in Greenland?

A. The Arctic circle is the latitude where there will be a day without sun and the day without night. Further north more and more days are there.

Q. What kind of animals live in Greenland?

A. The Polar bears, humpback whales, musk oxen, walruses, reindeer, and sea eagles are just some of the many species that you may experience by land, air, and sea around Greenland.

8 Picnic Spots Near Hyderabad That A Perfect Rejuvenating Retreat From The Hustle Of Daily Lives!

19 Best Places To Visit In Siliguri In 2020 That Highlight Its Interesting Personality!

8 Amazing Restaurants In Dharamshala Whose Food Sends You To Heaven

18 Gorgeous Waterfalls Near Mysore For Your Mini Break In 2020