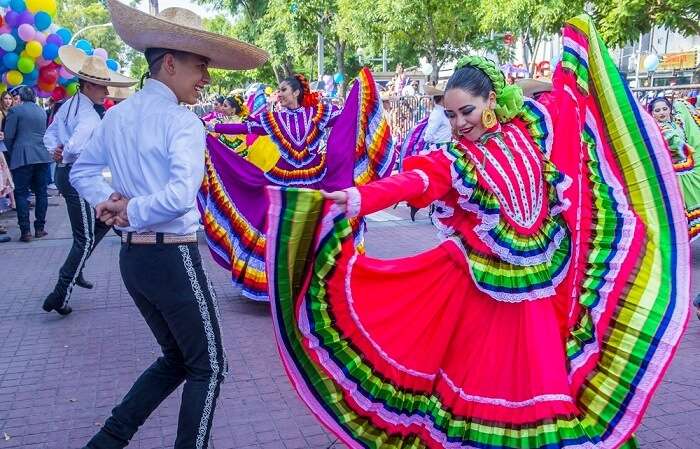 ‘Hay más tiempo que vida.’ aka ‘There is more time than life.’

A rule that all Mexicans live by, there is not a single dull moment when you’re in Mexico! Known for its delectable cuisine, over joyous people, and its rich culture, people from all over the world travel here for just a glimpse of the Mexican charm. And what better way to do that than be part of their festivities! Take a look at some of the best celebrations of this country, and plan your next vacation here keeping in mind the Mexican festivals that you want to be a part of.

The country of Mexico has more to its beauty and these 11 festivities prove that well. Take a look at them and save your dates because you definitely cannot afford to miss them.

Unlike what the name of this festival actually states, the Mexican festival Day of the Dead, or Día de Muertos is a celebration of life! In actuality, November 1 and 2 are important. While the 1st is dedicated to children, and is called as the “Day of the Innocents”, the second is dedicated to the people who have passed on. Graves are decorated with flowers, feasts are prepared, and families come together to remember their loved ones.

Date: 02 November
Where: All over Latin America

Must Read: 9 Best Places To Visit In Mexico For A Soul-Satisfying Holiday With Your Loved Ones!

With the words of Miguel Hidalgo y Costilla still resonating in the streets of Dolores, as well as the rest of country, Dia de la Independencia is the day that the entire country celebrates the start of Mexico’s war of independence. Today, a couple of weeks are celebrated with artists putting up shows and exhibitions, Mexican music filling the streets, and even some costume parties! Read ahead to know some more Mexican festival facts like these!

Come July, the streets of Oaxaca, amongst other states are packed with colours. A spectacular vision of art, dance, and music, the annual celebrations of Guelaguetza are a wonderful cultural experience, especially for tourists. Since the tickets to this festival’s cultural program are sold in advance, you can plan a trip around this event.

Suggested Read: Abide By These 10 Mexico Travel Tips For A Hassle Free Vacation

As the legend goes, Virgin Mary appeared in front of Juan Diego, one of the most loved patron saints of Mexico. The apparition occurred in Mexico City, and a church has now been erected at that spot. The religious festival of Día de la Virgen de Guadalupe pays respect to this event. The story goes forward and mentions a few relics too, which are displayed in the church. This also makes it one of the most religiously significant monuments.

A famous fest of Brazil, carnival is often associated with that country. However, set out to the coastal towns of Mexico, and a vibrant parade will welcome you. Bursting colours, accompanied by drinks, treats, dancing, and more, this festival goes on for more than a week, which is plenty of time to experience its magic to the fullest.

Date: February 20 to 26
Where: City of Veracruz

Suggested Read: Soon You Can Take Mexico’s Maya Train To Travel To The Yucatan Peninsula

One week of celebration before Easter, most commonly known as the Holy Week, Semana Santa is a fun filled festival. A beautiful blend of peaceful religious rituals, as well as some merry making, it is celebrated with a zest like no other! Like any other Mexican festivals and celebrations, carnivals are a must during such times. And so, Mazatlan Carnival is a grand affair, bringing together no less than 3,00,000 people! The carnival lasts 5 days, and ends with a day dedicated to fireworks.

Marking the beginning of Christmas, Las Posadas starts on December 16. Traditional songs sung by adults, as well as children, and a procession of children with lit candles are the main activities that are enjoyed during this season. Not to mention delectable sweets and treats that people gorge on while listening to stories of the Lord. The best places to enjoy this festival would be any small village in Mexico! They light up like the villages from fairy tales, and offer the best experience.

Date: 16 December
Where: Mexico and some parts of the United States

Another festival in Mexico dedicated to a milestone from the past is Cinco de Mayo. It is celebrated on the 5th of May, which marks the date of victory of Mexico over France in the Battle of Puebla. This festival has the reputation of being more popular in the US rather than Mexico itself, but remains significant nonetheless. Costume parades, and musical and cultural events are conducted for a week around this date.

A unique mixture of religion, as well as contemporary music, the Son Jarocho Music Festival is one of the most exciting events happening in Mexico. It takes place in a town called Tlacotalpan, which is set on the banks of the river Papaloapan. Legend has it that an image of Virgin Mary was seen floating over the waters here. This vision is celebrated every year in this town. To add to that, the famous Son Jarocho Music Festival has a number of artists performing Veracruz music.

The month of March brings with it a treat for art lovers in Mexico. Strewn across the city are more than 50 venues where performing art like dance, music, opera, as well as theatre is showcased. Festival de México brings to life the Mexico City while welcoming a huge amount of talent, as well as art enthusiasts as audience. It lasts 2 weeks, with most of the events taking place downtown.

Celebrated just after the Three Kings Day, Candlemas, or Día de la Candelaria is a religious festival too. On this day, friends and families gather and share sweets. The customary treat for this day is the sweet bread called Rosca De Reyes. Figurines of Baby Jesus, as well as the Three Kings are hidden inside this. Adding fun to this festival is the tradition where people who have got all the Three Kings have to host a party that night. Being one of the most loved Mexican festivals, Tamales is a must!

Along with some of the most enjoyable religious festivals, Mexico also celebrates art. The world’s best international art festivals including music and dance are conducted here. Mexican festivals are as vibrant as the country, as energetic as its people, and as fun as the culture. Being here during any of the celebrations is a treat in itself! So, make sure that you try to attend as many of these as possible on your next international trip with TravelTriangle!

Q. What are the celebrations in Mexico?

A. Some of the best Mexican festivals are Three Kings day, Candlemas, Guadalajara, Saint’s week, All Saints day.

Q. What are the main holidays celebrated in Mexico?

Q. What is the biggest celebration in Mexico?

A. The biggest celebration in Mexico is the Diez y Seis, Day of the Dead, The Christmas season, Lent and Easter and Dia de la Raza.

Q. What do Mexicans celebrate in November?

A. In November the two most famous festivals celebrated in Mexico are All Saint’s Day and All Souls Day which commemorates the honor the saints and remember the dead.

Q. What is Mexico famous for?

A. Mexico is known for its delicious cuisine which is worldwide popular and the Tequila which is made of agave cactus which suits the climate of Central Mexico. And alongside that Soda is also a popular drink.

Q. What do they do for fun in Mexico?

A. Some of the best things to do in Mexico are to take museum tours, being a part of the Day of the Dead, go diving in Cozumel, visiting Chichen Itza, or attend a party in Guadalajara.

Q. What not to do in Mexico?

A. When in Mexico don’t bring knives, guns and ammunition, drink tap water. Also when in the local markets don’t take the price offered and bargain and don’t miss trying the authentic Mexican food.

These Amazing 8 Things To Do In Burnaby Will Help You Explore The City And Have Fun!

6 Things To Do In Mount Abu In May To Explore Culture And History !