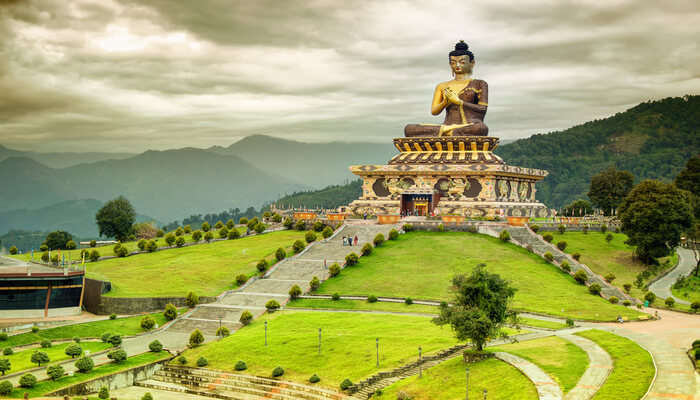 Concealed in the lap of the enchanted Himalayas, Sikkim is an alluring state in the nation and its kaleidoscopic excellence and mesmeric appeal will make you wonder! Sikkim boasts of its charming magnificence as well as offers an immersing range of activities for tourists to participate in. It also proudly incorporates the world’s third-highest mountain, Kangchenjunga. Sikkim is also home to icy mountains, Buddhist religious communities, and many beautiful grasslands. All these along with many other places to visit in Sikkim in June make the summer season in Sikkim most sought-after. Why? Let us find out.

Weather In Sikkim In June

Sikkim experiences mild rainfall during the month of June which keeps the weather cool and breezy all around the state. The average temperature recorded in Sikkim during this time is between 11 degrees to 19 degrees Celsius. June is the crowdest month in Sikkim in terms of tourist footfall and allows tourists to explore the many amazing places that there is in the beautiful state of Sikkim.

8 Best Places To Visit In Sikkim In June

Sikkim has some of the most serene places for exploration and one can spend their trip being in awe of these beautiful places! Here are some of the best places to visit in Sikkim in June!

Situated 147 kilometers from Gangtok, Khecheopalri is a popular lake that is identified with Guru Padmasambhava. Prior known as the Kha-Chot-Palri, Khecheopalri is set in the core of West Sikkim which is probably the best spot to visit in Sikkim in June. It makes for a marvelous landscape for photographers and nature lovers alike!

Must Read: A Brief Guide To Trains From Delhi To Sikkim For First Time Travelers To North East India

Much popular as the Tathagata Tsal, Buddha Park of Ravangla is one of the lovely places to visit in Sikkim during June. This rich park includes an immense spread of greenery and a 130-foot tall Buddha statue that structures at the center of the nursery. Set at the lower regions of Maenam Wildlife Sanctuary, ensure you visit this eco-park on your next outing to Sikkim!

Suggested Read: 12 Gorgeous Hotels In Sikkim That Are Your Getaway To Rejuvenation In 2022

Standing tall at a height of 16,207 ft., Goecha La offers an arduous trek of around 11 days and happens to be one of the most interesting spots to visit in Sikkim in summer. Extending up to a distance of 90 kilometers, the Goecha La trek will take you through beautiful scenery and landscapes. Simply ensure you pack right and get an appropriate wellbeing registration done before you set out on this intense trek.

Suggested Read: Witness The Magic Of Sikkim At These Mystical Places To Visit In North Sikkim

A natural asylum situated in the core of North Sikkim, the Yumthang Valley of Flowers includes underground aquifers, streams, valleys, huge fields, and yaks. Yumthang Valley is one of the most beautiful places to visit in North Sikkim in June because the valley is sprung up with blooming flowers and will give you a chance to experience the location at its most sublime when the red, pink, and purple rhododendrons are in full blossom.

Situated at a height of 14,140 ft., Nathu La Pass is a high mountain pass that without a doubt happens to be the best spot to visit in Sikkim. Considered to have been a piece of the previous silk course, this raised mountain pass interfaces the province of Sikkim to the self-governing district of Tibet. Bound by snow during the winters, it merits a visit in summer despite the fact that the odds of seeing snowfall are less. You can gain the pass required to visit Nathula by means of any affirmed visit administrator in Sikkim.

Suggested Read: Paragliding In Sikkim: 6 Spots Where You Should Definitely Try Out This Thrilling Activity

Much popular as the Changu Lake or the Tsunami Lake, the well-known Lake Tsomgo is roosted wonderfully at a rise of around 12,310 Ft. in the eastern region of Sikkim. This is also considered as one of the best tourist places to visit in Sikkim in June because you can have a blissful encounter with nature during your time here.

Suggested Read: Planning A Sikkim Trip On Budget? Know How To Make It Affordable Yet Awesome Like We Did!

A well-known UNESCO World Heritage Site in the core of Sikkim, Khangchendzonga National Park is a home of imperiled species such as the snow panthers, musk deer, Himalayan tahrs, and obfuscated panthers. Pay a visit to this park to witness the innocent beauty of the flora and fauna of India.

Suggested Read: 12 Places To Visit In Sikkim In May That Will Blow Your Mind Away With Its Allure!

For the individuals who are attached to the consistently beguiling Red Pandas, Singalila National Park is probably the best spot to visit close to Sikkim during summer. Set on the Singalila Ridge that stands tall at a height of around 7000 ft, it is home to a portion of the nation’s rarest and most colorful creature species like the Chinese pangolin, chinkara, leopard, black panther, scarlet minivet, and satyr tragopan.

Sikkim is a highly touristic area and has great landscapes. There are many places to visit in Sikkim in June that can be explored under the bright blue sky and the soothing breeze. All these places have a unique beauty of their own and cannot be compared on any parity scale. So, don’t wait anymore and plan your holiday in Sikkim with TravelTriangle this June!

What is Sikkim famous for?

Sikkim is famous for its serenity and tranquil surroundings along with its pilgrimage locations and lakes.

What can one buy in Sikkim?

Which monasteries can one visit in Sikkim?

Some of the monasteries in Sikkim that one can visit are: 1. Enchey Monastery 2. Dubdi Monastery 3. Lingdum Monastery 4. Raland Monastery 5. Phodong Monastery

Does one need a permit to visit Sikkim?

Foreign nationals require the Restricted Area Permit to visit Sikkim whereas Indian tourists do not need a permit.

How many days are enough for a trip to Sikkim?

Around 4 to 5 days are an idea duration to explore Sikkim.

What is the famous food in Sikkim?

Some of the famous food items of Sikkim include gya thuk or thukpa, dumplings, momos, and Phagshapa.

What is the temperature in Sikkim in June?

The average temperature recorded in Sikkim in June is 19 degrees Celsius.The weather during this time is pleasant and Sikkim experiences light showers and sometimes,hail.