8 Places To Visit In Bangalore In June To Enjoy The 2022 Monsoon Season! 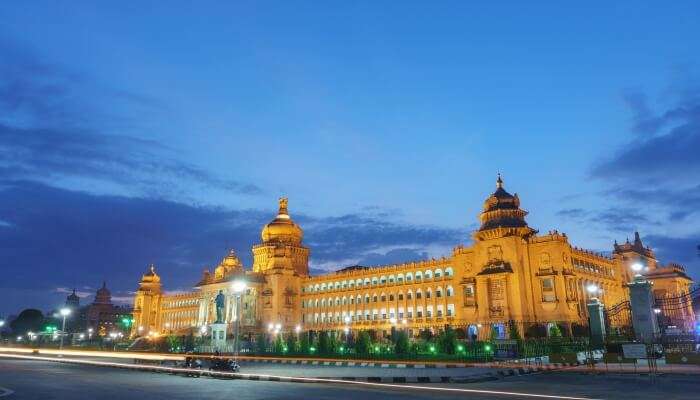 Monsoon season changes Bangalore into one of the most romantic places that one could witness in their lives. Not only is the city beautiful and has lovely weather, but in June, the temperature becomes even cooler and offers a comfortable stay. Bangalore or Bengaluru is blessed with some of the most popular tourist spots in India that are not only visually spectacular but can be reached quite easily. Despite being one of the busiest cities in India, Bangalore has always been a clean and comfortable city. The reason behind its popularity not only lies in the fact that it gives employment to thousands of youth in India but the fantastic places surrounding it as well. Here are some of the places to visit in Bangalore in June that no one can afford to miss.

8 Places To Visit In Bangalore In June

All these places are wonderful and located quite close to the main city center. Some of the spots are located a little far away from Bangalore, but can easily be reached by renting a car since it would take a mere one hour.

Anthargange is one of the trekking sites located quite close to Bangalore, which is popular among tourists who love hiking. It is situated at an altitude of 1712 meters and is famous for caves and mountains that are surrounded all around the site. The place is located 68 km from Bangalore and can easily be reached by renting a car or taxi from the city. Some people prefer to hike the entire distance from Bangalore to Anthargange. In June, the exploration becomes way more comfortable since Anthargange is generally an amazing location and the caves can get a lot of stuffy. Not only does the area looks gorgeous in June, but the cool breeze accompanied by the light rainfall can make it an optimum spot for the people who are looking for romance.

Must Read: The 10 Best Illuminating Museums To Visit In Bangalore

Savandurga is not only famous for its beautiful natural beauty but because it is the most significant single rock formation that can be found in the entirety of Asia. If you visit Bangalore in June, you should not miss Savandurga since the view in monsoon is way more spectacular than in any other month of the year. The entire area is covered with lush greenery and the cool breeze allows you to explore the site more efficiently. You will be surprised to find that there are two hills located out there, one of which is Billigudda, and the other is Karigudda. Many tourists prefer to trek out there, and they often choose Billigudda because it is more comfortable.

Suggested Read: 17 Most Popular Temples In Bangalore To Visit For A Spiritual Retreat

Bangalore Palace is one of the quintessential places to visit in Bangalore in June.. Constructed in 1878, the palace has an area of 45,000 square feet. It resembles the Windsor Castle of London quite vividly because the founder of the palace King Chamarajendra Wadiyar intended to do so. You will be able to witness ballrooms, durbar halls, museums, light and sound shows inside the premises of the palace. The place also hosts marriages, rock shows, and other cultural events as well. If you are planning a trip to Bangalore in June, do not forget to see the Bangalore palace because you will miss a life-time opportunity to view the grandeur and lavishness of the previous dynasties then. You will have to pay a fee of INR 230 to enter the palace if you are an Indian and a cost of INR 460 if you are a foreigner.

Suggested Read: 35 Places To Visit In India In December In 2022

Nandi hills is one of the closest hill stations from Bangalore that is located at an altitude of 4851 feet. It is quite popular among locals and tourists alike because not only is the entire area pretty spectacular, but it is historically significant as well. Tipu Sultan used to spend his summer in a palace built by him in the Nandi hills. That palace is one of the most visited spots in Bangalore. Apart from the summer palace of Tipu Sultan, there are other crucial temples located out there as well including Bhoga Nandeshwara temple. If you visit the Nandi hills in June, you will be dumbstruck by the natural beauty of the area. The rainfall makes the area to be much more comfortable, and the breezy air will make you go hiking or trekking in the hills more efficiently.

Machanabelle is one of the most critical barriers in Bangalore, and it is quite famous among the residents of Bangalore as well. The dam is not only located pretty close to the city; it is situated on an excellent site as well. In June, the beauty of the dam exemplifies a lot because of the excess water. The flowing water of the barrier against the rocks makes it an excellent site for swimming, hiking, and even trekking. Many people visit the Manchanabele dam with their family and friends to have a relaxing picnic. Some of them take part in fishing since there are several fresh fish located there. To genuinely experience the beauty of the dam, you must visit this place in June; otherwise you might find less water in the ditch, and the effect will not be that enchanting.

Suggested Read: 20 Monsoon Getaways Near Bangalore For A Scenic Escape

Chunchi Falls is one of the most famous waterfalls in Karnataka because the highest point of the falls is located 50 feet above sea level. The falls is situated by the river Arkavati. Most people visit this site while visiting Mekedatu. If you visit Bangalore in June, you will be amazed by the beauty of these waterfalls because the excess rain makes the falls even stronger, and the spectacle is more visually appealing. Chunchi falls one of the most famous picnic spots near Bangalore or in Karnataka because it is not much crowded, and hence people can enjoy a relaxing lunch with their families and friends. You would require to provide a parking fee of INR 30 if you are bringing your vehicle.

Suggested Read: 29 Enthralling Spots For Camping Near Bangalore That Are Worth A Visit In 2022

Ulsoor lake is one of the calmest and beautiful places that is located in the heart of the city. The lake is famous among travelers and locals alike because it is mesmerizingly beautiful. Built-in the British Era, this lake is well maintained by the Karnataka government. The site also offers boating, and many people prefer to take part in that throughout the year. If you visit the lake in June, you will be amazed by the natural beauty and the deep blue color of the lake. Most people visit the lake with their friends or families to have an enjoyable picnic by the bank of the lake. Though you are not allowed to cook inside the premises of the lake, you can always bring homemade or ready made snacks with you.

Suggested Read: 12 Amusement And Water Parks In Bangalore That Are Ideal For 2022 Summer Vacay

Wonderla Water Park is not only the most famous amusement park in Bangalore but in Karnataka as well. Many people from all across India visit this park since it is filled with fun-filled activities and amazing rides. There are over 60 rides that you can take part in. If you visit the park in June, the fun doubles because the park also organizes the rain-dance party during that time. The major attraction of Wonderla water park right now is the “reverse looping roller coaster” because it can go in multiple directions. Even if you are not interested in thrilling rides, you can always sit back and witness the craziness that will be going around you.

Further Read: A Family Road Trip From Bangalore To Paris: A Drive To Remember!

The places mentioned in the list are perfect for visiting in June or the monsoon because they become more enchanting with rainfall. You will be able to explore the spots more efficiently due to the glorious weather, and the lush greenery of the surroundings will make you happy in the most real sense. The weather and the natural beauty of the places will make you visit Bangalore repeatedly. So, plan your getaway to Bangalore with your buddies soon. Make sure that you explore all these top places to visit in Bangalore in June.

Frequently Asked Questions About Places To Visit In Bangalore In June

What are some of the most visited places in Bangalore in June?

Many people prefer to visit Bangalore in June due to the comfortable weather and beautiful scenery. Some of the places are particularly popular, including Shivasamudram falls, Wonder La water park, Ulsoor lake, Nandi hills, and many more.

What are the trekking spots in Bangalore that are perfect in June?

Bangalore is blessed to have several trekking spots near it that are mostly explored in June. Some of the places are Skandagiri, Savandurga, Junti Betta, Nandi hills, and many more.

What is the distance between Machanabelle and Bangalore?

The entire distance between the Manchanabele dam and Bangalore is around 38 km.

What are some of the places to visit in the Nandi Hills of Bangalore in June?

Nandi hills are genuinely spectacular in June, and some of the famous places that you must visit out there are Amruth Sarovar, Tipu Palace, Shiva temples, and many more.

What is the distance between Bangalore and Skandagiri?

The total distance between Skandagiri and Bangalore is around 62 km.