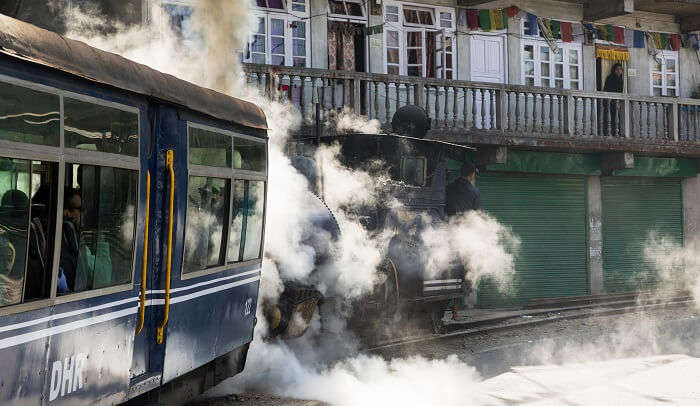 Sikkim, commonly referred to as “Nye-mae-el“ meaning “paradise” is the most famous tourist place when one thinks of visiting North East India. Particularly presented by the dramatic contouring of the scenery to the panoramic views of the snow-capped mountains, Sikkim is a state with warm hearted people boasting of some of India’s finest hospitality, magnificent treks, snow activities and breathtaking views!

The state is home to the world’s third highest peak, namely Kanchenjunga. A very unique and recommended way to experience the state is through a scenic rail journey. Tourists planning to hop on to the Delhi to Sikkim trains, should know a few things about the journey beforehand in order to enjoy a hassle-free trip!

There are no direct trains operating between Delhi to Sikkim as the state does not have an operational rail head of its own. The nearest station from Sikkim is New Jalpaiguri (NJP) in Siliguri, West Bengal. The train distance from Delhi to New Jalpaiguri is approximately 1514 kilometers.

The trains operating from Delhi to New Jalpaiguri often cover some of the major stations like Kanpur, Allahabad, Barauni, Danapur, Patliputra, etc.
Since New Jalpaiguri is the nearest railway station, tourists have no choice but to look at road trip options in order to reach Sikkim from the station.

The New Jalpaiguri station is about 122 kilometers from Gangtok, about 74 kilometers from Darjeeling and about 135 kilometers from Pelling. Tourists can simply hail a taxi or hop onto the State run buses for a quick ride to exploration of the amazing cities of Sikkim!

While there are no direct trains operating from Delhi to Sikkim, one can look at the below train options for travel from Delhi to New Jalpaiguri.

The DBRT Rajdhani is the fastest train to New Jalpaiguri. The train ignites from the New Delhi Railway Station (NDLS) and the destination of the train is Dibrugarh Town (DBRG). New Jalpaiguri (NJP) is a stopover where the train halts for a mere 10 minutes. The Rajdhani covers a distance of about 1466 kilometres from Delhi to New Jalpaiguri station with about 9 stations in between this stretch and a total of about 20 stations on the whole stretch (like Kanpur, Allahabad, Deen Dayal Upadhyay, Barauni, Kishanganj, Guwahati, etc).
Departing time: 04:10 pm
Arrival time: 01:30 pm (Day 2)
Operational Days: All the days of the week

Must Read: 19 Places To Visit In North Sikkim To Witness The Magic In 2022!

The ANVT AGTL RAJ is also considered as a Rajdhani train, promising delicious meals and comfort to the travelers. The train departs from the Anand Vihar Terminal (ANVT) situated in Delhi and goes upto the city of Agartala (AGTL) in the state of Tripura. New Jalpaiguri (NJP) is a station that comes after covering 5 railway stations and the train halts there for about 10 minutes. Some major stations that this train covers are Kanpur, Mughal Sarai, Patliputra, Barauni, Katihar, etc.
Departing time: 07:50 pm
Arrival time: 06:15 pm (Day 2)
Operational Days: Wednesday only

Suggested Read: Zuluk Sightseeing In 2022: A Traveler’s Guide For Unseen Places In Sikkim!

The Porvotr S Krnti is a superfast train, providing travelers an experience of an overnight train journey. The departure of the train takes place from the New Delhi Railway Station (NDLS) and the destination place is Guwahati (GHY). New Jalpaiguri (NJP), being one of the stopover stations on the route of this train, has a halt of only about 10 minutes. The train also halts at stations like Kanpur, Allahabad, Patliputra, Katihar, Goalpara town, etc.
Departing time: 11:45 pm
Arrival time: 12:20 am (Day 3)
Operational Days: Wednesday and Sunday only

Suggested Read: Paragliding In Sikkim: 6 Spots Where You Should Definitely Try Out This Thrilling Activity

Also known as the Guwahati Anand Vihar Terminal Express, the North East Express is a superfast train that runs between Anand Vihar Terminal (ANVT), Delhi and Guwahati (GHY), Assam in India. The North East Express 12506 offers on-board pantry car and catering services to its passengers. New Jalpaiguri (NJP) is a stopover after covering 20 stations in the route of this train. The train halts at the station for 10 mins. Some of the major stations covered by the North East Express are Aligarh, Kanpur, Fatehour, Allahabad, Danapur, Khagaria, Barsoi, Kishanganj, etc.
Departing time: 06:45 am
Arrival time: 08:30 am (Day 2)
Operational Days: All the days of the week

The NDLS NJP SF Express is probably the only train that has its ending destination as New Jalpaiguri (NJP). The superfast and overnight express departs from New Delhi Railway Station (NDLS). The train covers a distance of about 1500 kilometres in 27 hours and 30 minutes. The train halts at 17 stations in between its journey (like Ghaziabad, Lucknow, Gorakhpur, Chhapra, Muzaffarpur, Khagaria, Kishanganj, etc.).
Departing time: 03:05 pm
Arrival time: 06:35 pm (Day 2)
Operational Days: Wednesday and Sunday only

Suggested Read: Check Out These 14 Places To Visit In Namchi In 2022, The Culture Capital Of Sikkim!

Termed as one of the oldest trains running in this zone, the Brahmaputra Mail 15956 is a train that operates on a daily basis. The train departs from Old Delhi Junction (DLI) and goes upto Dibrugarh (DBRG). New Jalpaiguri (NJP) is a stopover in the route of this train where the train halts for 20 mins. Some of the other stations covered by this train are Aligarh, Kanpur, Allahabad, Patna, Jamalpur, etc.
Departing time: 11:40 pm
Arrival time: 05:00 am (Day 3)
Operational Days: All the days of the week

The train departs from Delhi (DLI) station and goes up to AlipurDuar Junction (APDJ). The train covers about 58 stations in total, New Jalpaiguri (NJP) being one of them. Some of the major stations enroute this train are Aligarh, Kanpur Central, Allahabad Junction, Mughal sarai Junction, Patna Junction, Katihar Junction, etc.
Departing time: 06:35 am
Arrival time: 01:30 pm (Day 2)
Operational Days: All the days of the week

Suggested Read: Planning A Sikkim Trip On Budget? Know How To Make It Affordable Yet Awesome Like We Did!

Currently holding a record of being the longest daily running train in India, Avadh Assam Express takes about 68 hours to cover 3118 kilometers. The Train runs between Lalgarh Junction (LGH) and Dibrugarh (DBRG).

Delhi (DLI) and New Jalpaiguri (NJP) are both major stations in this route where the train halts for 20 minutes and 10 minutes respectively. Since the distance of the train is a lot, it usually runs late. The train covers a lot of station, some of them being Bhatinda Junction, Moradabad, Lucknow, Gorakhpur junction, kamakhya, Guwahati, etc.
Departing time: 07:20 am (Day 2)
Arrival time: 05:45 am (Day 3)
Operational Days: All the days of the week

Suggested Read: This Sikkim Itinerary For 6 Days Gave Us A Wonderful Trip That Got Us Awestruck

Usually departing from Bhagat Ki Kothi (BGKT), the BGKT KYQ Express runs about 2500 kilometers in total. The destination of the train is Kamakhya (KYQ). Delhi (DLI) and New Jalpaiguri (NJP) are one of the major stopover in this route where the train halts for about 30 minutes and 10 minutes respectively. Some of the other stations being covered on this route are Jodhpur Junction, Ratangarh Junction, Rewari, Lucknow, Varanasi Junction, Katihar Junction, etc.
Departing time: 04:30 am (Day 2)
Arrival time: 02:10 pm (Day 3)
Operational Days: Wednesday only

Suggested Read: 20 Drool-Worthy Restaurants In Sikkim For A Scrumptious Retreat

How To Reserve Delhi To Sikkim Trains Online

In this technological world, everything is just a touch away. One can just download the app of Indian Railways or surf through the website to check availability of the trains, train schedule and other services related to the desired journey. After checking the availability, just a tap away is the option to book the ticket of the chosen train.

Alternatively, the Delhi to New Jalpaiguri trains can be checked at major stations where a ticketing window is available for all rail related issues. The price of the trains running varies from the distance a train travels to the time a train takes to reach the particular destination.

Further Read: Gangtok Honeymoon: A Handbook About This Ultimate Paradise In Sikkim!

All in all, it can be said and seen that even though the journey by train from Delhi to Sikkim might take more than a day’s time, the same is worth it. In order to grasp the breathtaking views and gather the change in beauty and landscapes from the Northern to Eastern region of India, it is highly recommended to take up a train journey for the route of New Delhi to New Jalpaiguri. Go ahead and book a trip to Sikkim with TravelTriangle and savour the magnificent landscapes that the state has to offer.

Does the DBRT Rajdhani – 12424 train terminate at the Dibrugarh Town Railway Station (DBRG)?

How is the food on all of these trains?

One can find the food to be really delicious on board the Rajdhani trains. However, on the other trains, the food can be quite average.

Does Brahmaputra mail have a pantry car?

Yes. The Brahmaputra Mail does have a pantry car. However, the same can be chargeable depending the fare you booked the ticket for.

How do I reach the NDLS from Connaught Place in Delhi?

New Delhi Railway Station (NDLS) can be reached from Connaught Place via a direct metro, auto, taxi or bus. It is a distance of only about 15 minutes.

What are some of the most famous tourist spots in Gangtok?

What is the best time to visit Sikkim?

Gangtok In Summer 2022: An Exquisite Vacation Filled With Fun & Adventure!

Sikkim In June: A Complete Guide On How To Experience It Best In 2022

15 Best Hotels In Lachung To Answer The Call Of Mountains In The Best Possible Way!

10 Offbeat Things To Do In Lachen, Sikkim’s Undiscovered Paradise