Russia In March: An All Inclusive 2022 Guide When The Snow-Clogged Wheels Turn Again! 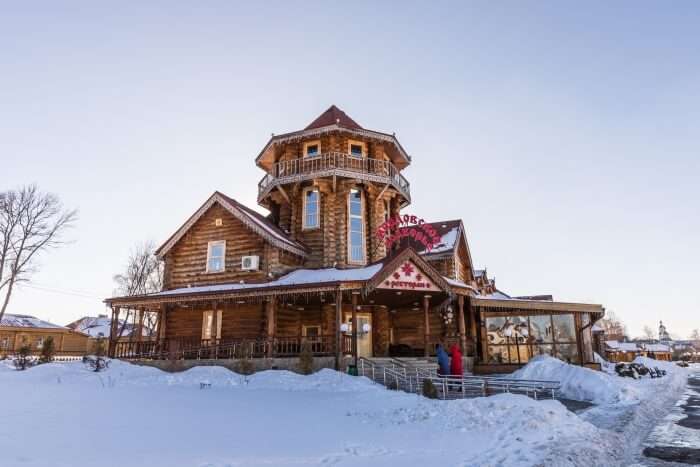 Russia is a country full of dramatic landscapes from lush forest to stunning beaches. Russia in March has been termed ‘beautiful’ by many as the snow starts melting in the cities towards the very end of the month. However, you can still come out of your house and walk around because the temperatures are not as low as they were from November until February. Instead of snowfall, you may expect rain or sleet, but a slight rainfall shouldn’t hamper your March travel plans. Read on to know what Russia has in store for you during the month of March.

Weather In Russia In March

If you want to travel to Russia in March, be cautious because the chances of precipitation will be high and it will probably be cloudy most of the time. The negative aspects will die down towards the approach of April. The advantage is that as a tourist, you will have the attractions to yourself and most likely have to pay quite less for the accommodations and flights during this season.

Must Read: Visiting Russia In April? Here Are All The Places You Can Visit To Enjoy The Chilly Weather In 2022!

Holidays And Events In Russia In March

All these festivals are significant annual events in Russia and it shows tourists about a few aspects of Russian life.

Places To Visit In Russia In March

The tourist landmarks in Moscow and other places look absolutely stunning and sparkling in the snow during the season. Here are a few places worth a mention when visiting Russia in March.

Moscow is known as the home of the legendary Red square, the mighty Kremlin and the iconic St. Basil’s cathedral. This place is the cultural and political center of the country. The red square is where there are some of the most recognizable landmarks and it is a fascinating place where you will see the old places colliding with the new ones. The city is resplendent with ballet studios and old churches along with high-rise buildings dotting the skyline of the city. We suggest you do stop to view the amazing sunset.

This is a rather an enchanting city which has a fascinating and rich history. It is referred to as the Jewel of Russia’s Crown. The aristocrats’ Tsars rule over Russia for over two centuries until the Russian revolution in 1917 from St. Petersburg. You can still see the remains of the grand past in this beautiful historic center. Old palaces and grand gardens are a highlight of the city. The wide roads and rich greenery are in a stark contrast to Moscow’s glamour. The city is through and through a paradise in the Winterland.

This place is located just 30km from Estonia in the north west of Russia. The ancient city of Pskov has a fortified riverside of Kremlin and the Trinity Cathedral, which is a popular spot among tourists. Pskov is a very old city which dates back to 903, which is almost as ancient as the country itself Pskov still has remnants its medieval town walls and those walls are cramped with small picturesque churches that are an amazing example of Byzantine architecture. In March, when the snow melts and the grass turns green, the place seems to shine in the sun – a sight you must see.

Novgorod is an ancient and provincial town in Russia, which is a popular pit stop on the way to Moscow from St. Petersburg. It is another one of the oldest towns in the country and was once the leading political and cultural heart of Russia, at that point, Moscow was just a provincial post. The tourists like to explore the once powerful Kremlin in this place which is now a relic of Russia’s past. As an insider tip, we suggest you trek along the borders of the Kremlin which will be no less than a scenic trek.

This is the capital of Eastern Siberia and considered to be one of the topmost stops on the Trans-Siberian Railway between Moscow and the east. The entire city is known for the pristine lakes, wooden houses which are located by the Soviet block apartments. The lake Baikal is the main highlight of this city which is located around 45 kms away. This place is also known for being the exile place for intellectuals, artists and others. Alongside that, there are several churches which include the famous Ascension Church.

What To Pack For Russia In March 2022

Russia weather in March 2022 will be cold so carry as many jackets, sweaters, and scarfs as you can when you travel to Russia in March 2022. You might find snow on the ground almost during your entire trip so make sure to pack in your snowshoes and boots as well. Check if your bag is inclusive of all your snow weather accessories along with your luggage like to warn scarfs and hats because of it pretty much essential to be prepared for the cold.

If you wish, you can also buy fur hats and souvenirs around the streets of Moscow, where the variety of selections are endless. When you do go shopping, wear heavyweight jeans, a thick sweater, a coat, and a warm vest. If you have a hoodie on your sweater, that would also be a great option. Shopping involves a lot of walking so you will also want some warm shoes and socks to keep your feet nice and warm. It is suggested not to wear flats, heels or composition soles during the snowy weather in Russia. Be ready for some slippery walking if you do wear those shoes.

Russia is a beautiful and ancient place where you will find tons of ancient architecture, churches, cathedrals, and museums. If you are a fan of art, Russia will fascinate you and bring you back to the old ages. Russia in March is a breathtaking sight which is full of life from all the festivals that are celebrated during that time. So, if you are visiting Russia during that time, make sure you know what to expect!.

Which is the best time to visit Russia?

The temperature varies greatly during the summers and winters in Russia and therefore the best time depends on the one traveling to the country.

Is Russia expensive to travel to?

Due to the devaluation of the ruble, traveling to Russia has become much more affordable now.

Is April a good time to visit Russia?

One can grab amazing deals in April as it sees a lesser rush as the snow is melting in Russia.

What should I wear in Russia?

Pack for winters if you are traveling to Russia in March.

Is Russia good to visit?

Yes, Russia is an amazing destination to explore.