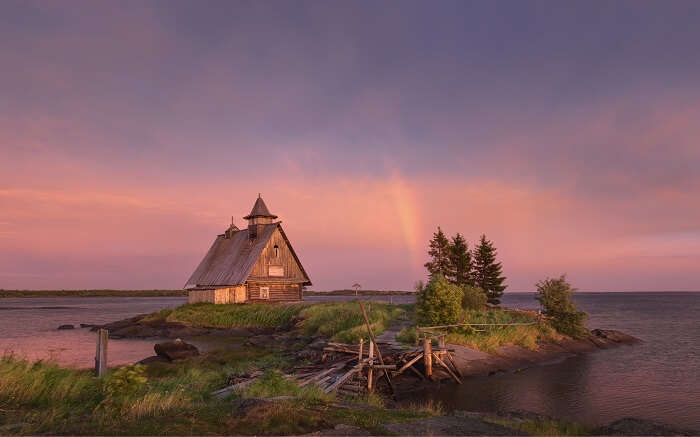 The word “diversity” holds great prominence when it comes to describing Russia. Vast mountains, deserts, beaches, geyser fields, heritage sites, palaces, icy lakes, stunning art and architecture; the country is a museum on its own. This communist nation has also given birth to some internationally well-known artists and political figures. If that weren’t enough, how could one stay away from Russia’s distinctively delicious cuisine! Here is a rundown of some of the interesting places to visit in Russia that travellers need to check out: 1. Sochi 2. Lake Baikal, Siberia 3. Red Square, Moscow 4. Krenitsyn volcano, Kuril islands of Onekotan 5. Manpupuner Rock Formations 6. St. Petersburg 7. Suzdal 8. Kazan 9. Karelia 10. Volga River

Termed as the “beach resort”, Sochi is a coastal town located on the black sea at the foot of the Caucasus Mountains. Although the place became glamorous only after hosting the 2014 Olympics, Sochi had previously been the favourite vacation spot of the Russians. During summers, travellers enjoy swimming in the sea whereas the winters offer adventurous activities such as skiing. Some of the popular attractions in Sochi include Stalin’s Dacha (holiday home), Mount Akhun, Vorontsovka Caves, Rosa Khutor Ski Resort, Olympic park and Riviera Dolphinarium (largest aquarium in Russia) Best Time To Visit: May – October Ideal Duration: 2 Days

Must Read: 20 Fascinating Places To Visit In Moscow That Reflect The Real Russian Beauty!

Apart from being the deepest lake in the world, Lake Baikal is also the prettiest and purest spot in Russia, thanks to the captivating landscapes and the clean atmosphere. One of the best Russia tourist attractions, it is located in the Siberia forests. Baikal is also dotted with several resorts making it an amazing holiday destination. If you can tolerate low temperatures, a visit during the winters is recommended since once the lake freezes it forms beautiful patterns due to the presence of high amount of oxygen. Apart from ice skating and skiing, travellers can enjoy their day relaxing in the natural hot springs.

Red Square is at the centre of Moscow is one of the most beautiful things to see in Russia. In older Russia, the word ‘red’ also meant ‘beautiful’ and hence it got the name Red Square which meant beautiful square. This beautiful square houses beautiful cathedrals, museums and government buildings. The place is visited by millions of tourists everywhere because of its rich cultural and historic heritage. The must-visit spots in Red Square include St. Basil’s Cathedral, Kazan Cathedral, The Iberian Gate, Kremlin Wall, Statue of Minin and Pozharsky, Lenin Mausoleum, State Hall Museum and City Hall.

Onekotan island is untouched by civilization. The Krenitsyn volcano is situated in a lake which is located in the centre of the island. This volcano had erupted sometime back in the 50s but has since then remained dormant. There are no activities available and travellers will need to obtain a permit from the government to make a visit. However, the picturesque view and natural charm are worth all the trouble.

Among the most spectacular places to see in Russia, Manpupuner Rocks initially look like the work of aliens (or maybe they really are, who knows!), these uniquely shaped pillars would remind one of the Easter Island Heads. Nobody knows about its origin, but these seven pillars are nothing short of an enigma. Some say they were formed due to some activities of nature, whereas some others say that these were built by ancestors for spiritual reasons. Some even consider the place to be a meeting point of the spirits.

Suggested Read: Russian Museums: For A Tour Down The Country’s Expansive And Profound Culture

One of the most popular and best places to visit in Russia deserves to be on this list. St. Petersburg, similar to Red Square, is absolutely a place of architectural beauty. Large parks, magnificent churches, museums, monuments and palaces adorn this city. The place also is well-known for hotels, restaurants, pubs as well as exotic dance bars. Best Time To Visit: June to August Ideal Duration: 4 Nights/5 Days

Suzdal is an ancient Russian city, and the government has taken care to preserve its historic charm. Travellers can see the best works of Russian architecture in this city. The city is devoid of any modern buildings and most of the people live in small wooden houses. From onion shaped colourful domes to intricately designed cathedrals and monasteries, Suzdal offers a glimpse of what Russia might have looked like in the olden days. The historic past, incredible landscape along with the tranquil atmosphere, make Suzdal a place worth visiting.

Similar to most Indian metros, Kazan too is a cosmopolitan destination where people of diverse religions and culture co-exist in harmony. Travellers visit Kazan to see the Kazan Kremlin which has been declared as a historical site by UNESCO. The major attractions include watchtowers, museums and cathedrals. The popular street in Kazan is the pedestrian-friendly Bauman Street, which is lined by restaurants, bookshops, bars and boutiques.

The beautiful piece of land was created by a glacier and it extends from the White Sea coast all the way to the Gulf of Finland. Two of the largest lakes in Europe – Lake Onega and Lake Ladoga are found in Karelia. From wide lakes to beautiful hills, Karelia is one of the best marvels of nature. The grand outdoors make this destination a great place for fun activities such as white water rafting, hiking, biking, swimming, sailing and horse-back riding. This region also includes a number of spa retreats for travellers to rejuvenate themselves.

By now you would have noticed that Russia has a number of water bodies, both big and small. The 3700 km Volga River is Russia’s crowning glory since it is the largest river in the world. This river is responsible for the flourishing of a lot of communities who lived along its banks. Volga River also played a crucial role in the growth of Russia’s foreign trade with the rest of the world in ancient days. A cruise along this majestic river will give you a taste of its vastness and beauty. Stunned by these mesmerizing places to visit in Russia? Let’s save some money and plan a trip to this land of incredible landscapes, architectures, and cultures.

Frequently Asked Questions About Places To Visit In Russia

Which are the best places to visit in Russia?

To enjoy a trip to Russia, make sure to visit attractions like: 1. Lake Baikal 2. Moscow 3. St. Peterburg 4. Altay 5. Sochi 6. The Russian Tundra 7. Peterhof

Is Russia safe for tourists?

Yes, Russia is one of the safest countries in the world. Especially in major destinations like Moscow and Vladivostok, the crime rate is quite low. To enjoy a safe trip, make sure to inform your friends/folks about your location and do not visit secluded or risk areas.

Can I travel to Russia during Covid times?

Yes, Russia is now open for travellers from India. To ensure a safe trip, adhere to the Government protocols, maintain required social distance, keep wearing a mask when in public, and keep sanitizing your hands at certain intervals.

When is the best time to plan a Russia trip?

The months during late spring or early autumn allow you to witness the best of the destination. So, you can surely plan a trip during this time as these months will let you enjoy the warm weather of Russia.

Which are the best things to do in Russia?

There are numerous things you can enjoy on your Russian trip. Some of the best ones include: 1. Indulge in skiing At Red Valley 2. Go on a canal tour 3. Visit the State Hermitage Museum 4. Savour some traditional delicacies at the top restaurants 5. Try ice-skating at Gorky Park 6. Enjoy a show at Samara Academic Opera and Ballet Theatre

Where can I visit in Moscow for sightseeing?

Which are several transportation options in Russia?

To reach from one place to another in Russia, you can pick from the options like a micro-bus, taxi, or tram.

What is the distance between St. Petersburg and Moscow?

Both the destinations are around 706.0 km apart and to reach from one place to another, a taxi ride will take around 7 hours.