Visiting Russia In April? Here Are All The Places You Can Visit To Enjoy The Chilly Weather In 2022! 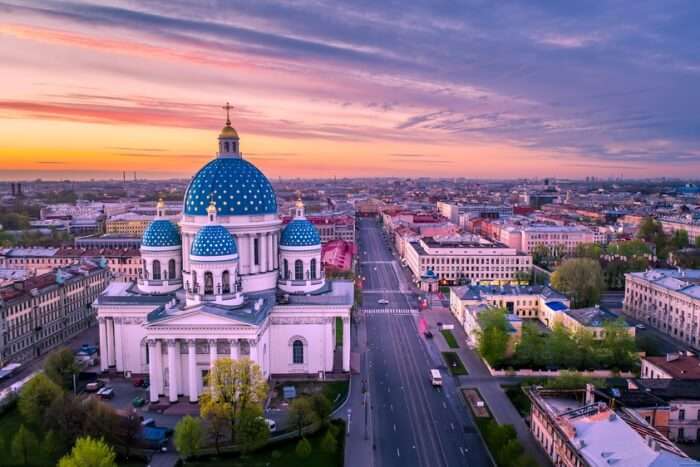 The largest nation of the world and bordered with European and Asian nations, Russia, is surrounded by the largest ocean, i.e. the Pacific Ocean and the smallest ocean i.e. the Arctic Ocean. What makes Russia’s location interesting is that one-fourth of the nation is located in Europe and three-fourths is located in Asia. But only 22% of its population lives on the latter continent. What makes Russia world famous is the fact that it home to some of the unique creations of nature- Lake Karachay (one of the deadliest lakes of the world), Oymyakon (the coldest place on Earth with habitation), Lake Baikal (the deepest lake on Earth), the Trans-Siberian Railways (the longest railway in the world), Mt Elbrus (the highest point of Europe) and you can go on adding the names

That makes Russia a gem with all its wonders and monuments and also provides all the nature lovers and architecture lovers many plus points to visit the country. But one needs to know the best time to visit the country so that you can enjoy every masterpiece of the country to the fullest. That time of the year is the month of April. So, here’s providing you an insight to the weather conditions in Russia in the month of April and what all you can visit.

Weather In Russia In April

Russia experiences a humid continental type of climate due to two factors- its enormous size and many areas of it is far away from the seas. The mountains in the southern part of the country hinder the warm air coming from the Indian Ocean. And the plain region of the western and northern parts makes the country open to the coldness of the Arctic and Antarctic oceans.

April in Russia will provide you a blend of both the temperatures- a minimum of -57.2ᵒC and a maximum of 34ᵒC. It is the ideal time for you to make a visit to the country because of the following reasons:

Russia In April: Places To Visit

When visiting the country, there is a lot you can see and capture. A few places that need to be in your To Go list have been given below:

This is the place well known for traditional Russian food. Also, this was the place where Hitler had planned to hold a celebration after he had conquered the city of Leningrad. With a magnificent in-house gym and a rejuvenating spa facility available at the hotel, you simply cannot go wrong with this place! You can enjoy live music during the day and have an amazing Russian cuisine to accompany with that soothing vibe around. What say? Liking it already?

The Hermitage Museum is the largest museum of the country and is home to 70 cats, that provide a protection to the museum’s treasures against the rodents. A museums displaying Russia’ glorious culture and beautiful art, you cannot just miss this one on your next trip. Established in the year 1764, this stunning museum of art is the second largest one in the world. Care for a cool trip here?

Running from Moscow to Vladivostok, the Trans Siberian Railway is the longest railway in the world. The railway line is known as the line of the tsars. However, you can also travel to other places via this train including North Korea, and Mongolia.

Located in the Caucasus Range, Mount Elbrus is one of the Seven Summits of the world. There’s a cable car system facility that takes the visitors to the high altitudes of the mountain. Having two main summits, which are dormant volcanoes, this peak can be considered as one of the highest summit in Europe notwithstanding the fact that Caucasus Mountains lie on the crossing of Europe and Asia.

This valley is located in the Kamchatka Peninsula and is also the second largest geyser valley in the world. Accommodating several hot springs, this valley is known to be a part of Kronotsky Nature Reserve, which has been declared as a World heritage site. The only means to reach this valley is via helicopters, which is what makes it a little difficult to reach, but surely not worth missing!

Bordering Finland and the White Sea, the island is famous for its open-air museum. The Kizhi structures on the island date as old as 14th century. The castle on the island boasts Russia’s best and intricate designs that are a visual treat to the eyes. Ferry services are available from the city to the island.

Those paying a visit to the Trans Siberian Railway mandatorily visit the lake. Known as the Pearl of Siberia, the Baikal Lake is said to have one of the clearest waters of the world.

One’s trip to Russia is incomplete without a visit to the Kremlin that is home to the top government offices of the country. This iconic structure is the landmark of Moscow and is visited by tourists from all over the world. The motley of colors and unique structure make it an interesting attraction of Russia.

Image Source
What makes the building an attraction is its unique architecture that resembles to the shape of a bonfire.

Suggested Read: 19 Cool And Unusual Things To Do In Russia That You’ve Never Heard Before!

What To Pack For A Trip To Russia

As per the temperatures in April, the days would be warm and the nights would be cold but not severely cold. Also, the weather is cloudy most of the times. So, accordingly, one needs to take winter wear like a jacket, peacoat, and sweaters that will do well. Also, for the day, one can wear a full sleeve top. As far as the footwear is concerned, one must take ankle boots and a pair of comfortable shoes.

Holidays In Russia In April

As per the list of the national holidays in Russia, there are only two holidays that fall in the month of April:

Russia, as a country, has a blend of beauty to offer to you- lakes, churches, mountains, monuments. The diversity of weather all the more enhances the travel experience. A visit to Russia in the month of April is a lifetime experience which you surely can’t miss!

Is April a good time to visit Russia?

The Russia weather in April remains slight pleasant in the afternoon but as the night sets in it turns to be a bit colder. So if you’re planning a vacation in April, then it might be pleasant but not feel like spring.

How cold is Russia in January?

The winter in Russia is not extremely cold and the temperature remains between -15 degrees Celsius. The warmth sets in by the starting of April.

How cold is Russia in February?

The weather in Russia during February remains around 2 degrees Celsius and low ranging from 7 degree Celsius to -3.

When can I plan a visit to Russia?

You can plan a visit to Russia during the month of April when the weather remains comfortable and the temperature is moderate.

How is the weather in Russia in April?

The weather in Russia is quite comfortable in April unlike the other months when the weather remains hot and humid.

What are the places to visit in Russia?

Russia has a number of places to visit which include Hotel Astoria, The Hermitage Museum, Mount Elbrus, Valley of Geysers, Kremlin and many more.

What type of food shall I taste in Russia?

Russian cuisine is very famous in Russia and its parts and you must not let it go once you visit Russia.

How can I travel from Moscow to Vladivostok in Russia?

You can travel via The Trans Siberian Railway which connects to all the cities of Russia and makes traveling convenient.

What is the adventurous thing for one to do in Russia?

Going for a cable car ride over Mount Elbrus is one of the most fascinating things to do for an adventure geek in Russia.

What should I pack for a trip to Russia?

You must pack some light clothes during your Russia trip because the weather remains hot and humid mostly. Also, pack sunscreen which you would need time and again to ditch the scorching heat and sun rays.

Is Russia safe for tourists?

Russia is a country which has both natural and cultural variety along with technological advancement which makes it easier for tourists. Russia is a safe country if you stick to large areas. Overall, the people of Russia are hospitable and will help you out if you need anything.