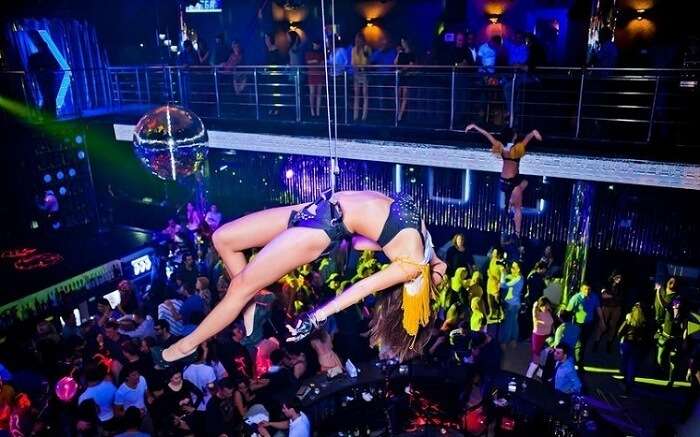 The colder the place the hotter are its vibes! On that note, I begin this discourse on the nightlife of the country that has most of its popular cities thriving in subzero conditions, and as the night falls, they step out to celebrate night and lights. Russia nightlife thrives on local vodka, freshly brewed beer, gigs, and blondes all at Soviet retro drinking hot spots!

And if you thought that Russian nightlife thrives at its best in St. Petersburg, Moscow, Sochi, and Vladivostok, think again and consider a few more places where Russian way of life would make you feel home. These top Russia places with terrific nightlife scattered around the city would send you on a mystical trip to the best of Russia! Do carry this Russia nightlife guide to have a blast on your vacay!

Check out this list of Russian cities which you ought to visit to witness nightlife in Russia and to party with the locals! Keep scrolling down and read along!

Image Source
Moscow is deemed as one of the most vivacious capital city that never sleeps! Of everything in the world, one thing is for sure, Moscow people just love partying. As the sun sets and the historical city magically transforms party paradise embellished with light and bliss, and euphoric Russians shaking on the tune of chart toppers.

While Arma17 is regarded as the best techno club in the city, Cafe Mio is known for its lit and fashionable interiors. And then there is Bar Gypsy – one of the most upscale bars in Moscow.
While more clubs and bars are concentrated towards the city center, there are a few excellent karaoke bars, clubs, and breweries, and adult clubs in Moscow offering experiences like nowhere else. The party places and hotspots in Moscow have plenty of hidden secrets that only get revealed at night. Care to know more? Explore.

Must Read: Summer In Moscow: Soak In The Landscapes Of This Stunning City

St. Petersburg nightlife is made up of ballet, opera, classical music and theaters shows, but that’s for the discerning! If you are looking never-ending fun, rave parties, and lit pubs to slay the night in style while sipping on the vodka and assorted cocktails, then we’ve got you covered there as well. While there are pubs and bar across St. Petersburg matching to everyone’s taste, it is highly recommended to stick to the City Center if you have plans to leave for the someplace late night or say you’ve got a flight to catch.

Vasileostrovsky and Petrogradsky island districts have happening nightlife too yet there are chances of you getting trapped late night when the bridges go up and metro lines are shut for the day. Bridges start opening at 1:30 am and close back at 5 am while metro services suspend by 12:30 am and it doesn’t start until 5:30 am. Excited? Pack your bags and shake a leg here during your day trips from Moscow. Résident Bar is popular as one of the best nightclubs in Russia and you ought to visit it!

Suggested Read: 19 Cool And Unusual Things To Do In Russia That You’ve Never Heard Before!

Image Source
The coastal town extending towards the coastal region of Black Sea shot to fame after hosting Winter Olympics in 2014. And Sochi has the right perfect party places that account for a thrilling Russia nightlife. There are quite a few pubs ranging from German to Irish- style with an exotic interior made up of timber and serving beer and homemade alcohol. Nightlife in Sochi is special because there are bars that overlook the magnificent beauty of Black Sea, night makes for even wonderful time presenting majestic spectacle.

If adventure is on your mind, then there are places offering live adult entertainment. Body and Cabaret are the perfect places that have a welcoming atmosphere for everyone looking to experience the famed adult/strip clubs in Russia.

Kazan shines brightly after dark. The city is also known as the proud cultural hub of Russia and has plenty of places to venture where you can experience Russia nightlife at its finest. Kazan has jam bars and then there are Cuban and American bars that are nicely done up in Russian style. If you are someone who’s has a taste for good music, stylish gastropubs, and wine bars then Kazan has places that will guide you aptly to make the best of amazing night time there.

Also, there are exhibitions showcasing contemporary Russian culture and famed art that still thrives in places across Russia.

Best nightclubs in Kazan: Sol Bar, The Woods, Cuba Libre, What To Do!?, Apartment 63, Mr. Willard, and Relab, Chinatown Café, and Luxor Club

Suggested Read: Celebrate The Valentine’s Day In Russia With Your Beloved & Pop Up The ‘Big’ Question!

If you are planning to go on a club-hopping spree then Russia’s Pacific Ocean port, Vladivostok is the place to explore. If good food along with European and fusion cuisines is on your mind, head to Arena Club. The Avangard Stadium and Zolotoy Rog Bay region is the town’s biggest party hub with as many as 5 pubs and discs enough to set the night on fire. Assorted drinks, wonderful cocktails, and amazing company await you at the lit dance floors of the pubs. They certainly make the best of Russia nightlife.

The one place that towers above the rest in the sprawling city of Vladivostok is Cuckoo Club! If you want to submit yourself to the madness of night and experience supreme joy, head to Cuckoo Club. This place has a nightclub, cafe, and a summer terrace with a swimming pool that would keep you engrossed during the night!

6. Novosibirsk – Coz Siberia Too Has A Lit Nightlife

Image Source
Russia nightlife exudes the true colors of the excellent nation. With a gamut of exotic cocktail and handmade vodka, Novosibirsk casts its spell on the seekers of night. While Novosibirsk stands almost parallel to St. Petersburg if not less, there is a multitude of options for you to try here. Start with an array of music clubs, dance clubs, pubs, and bars, and if at all you want, you can pleasantly surprise yourself with a visit to a strip club, Novosibirsk has it all.

Nevertheless, if you are looking for a personal recommendation then Novosibirsk can make for wonderful options because of the fact that it has a wonderful climate and lovely nature. Novosibirsk, located 3300 km from Moscow is the unofficial capital of Siberia and it isn’t as crowded as top cities like St. Petersburg and Moscow. Yes, there might be plenty of surprise waiting there for you!

Russian just like to drink and have fun and if you want to see how Russians fare then try visiting the beautiful town of Kaliningrad. The pubs and bars with wonderful music and jam session, live music, and a wide range of entertainment options have turned Kaliningrad as the perfect party place for Russians and tourists as the night falls.

With plenty of options for party peeps, there’s nothing more you can ask. Just drink the night away and start exploring the diverse culture of the city when you are sober!

Suggested Read: Shopping In Moscow: 14 Top Places That Will Make You Believe The City Is As Classy & Chic As Milan!

The pretty Russian city thriving with craft and culture from the Soviet times is just the place you’d want for a happening Russia nightlife. Yekaterinburg has plenty of places in and around the city that oozes with the color of the wonderful night all concealed behind the worn out facade that presents the best of the Soviet era. Bars, clubs, and similar discotheques are the places to go as the night grows dark in Yekaterinburg.

There is nightlife around the world and then there is nightlife in Russia – capable enough to send you on a fantasy trip! Things that happen in Russia, stay in Russia! So, plan a trip to Russia and don’t forget to indulge in the nightlife of these cities for the most ultimate and mind-blowing experience that you will cherish forever!

Which are the best clubs in Russia?

Some of the best clubs in Russia are Propaganda, Mosaique, and Gipsy.

Is Moscow safe for Indian tourists?

Yes, Moscow is safe for Indian tourists but it is advised to not roam around too late during the night.

What can I do at night in St. Petersburg?

Some of the things to do at night in St. Petersburg are:
1. Listen to live rock ‘n’ roll at Money Honey
2. Party at Griboedov club
3. Enjoy wine at Dead Poets Bar

Which cities should I visit in Russia?

If you are looking for a thriving nightlife then the best places to visit in Russia are Saint Petersburg and Moscow.

When should I visit Russia?

May to October is the best period to explore Russia.

Do I need a visa for Russia?

Yes, Indians need a visa to visit Russia and they can stay there for 30 days on a tourist visa.

Pretoria Nightlife: 12 Dazzling Places To Check Out In Pretoria In 2022

Mangalore Nightlife: 5 Chic Bars In The Port City To Party Like Never Before!

Nightlife In Andaman: 6 Phenomenal Ideas To Enliven Your Vacay In 2022!