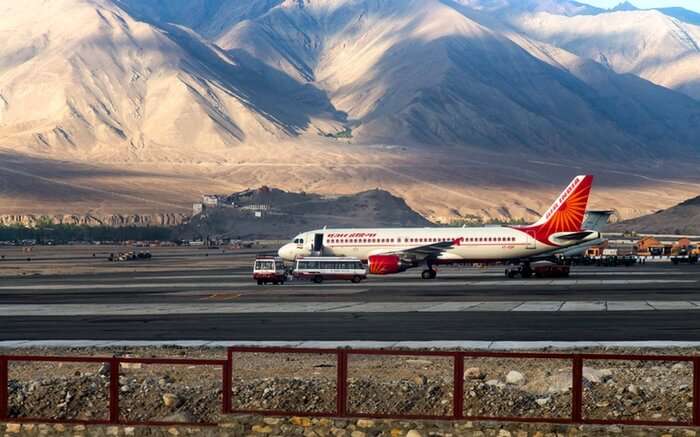 As these airports located in the renowned places across the country connect, they also amaze people with their charm and remain remarkable because of the number of people they cater to. Located across India, the airports continue to be busy, wonderful, classy, popular, and extreme. Moving ahead we find how good these airports actually are! Here is a list of domestic airports in India as well as the international ones.

16 Most Scenic And Popular Airports In India

Airports have made our lives easier and travel faster. Here is the list of airports in India known for offering the best experiences in 2020:

At 3256 meters above sea level, the Kushok Bakula Rimpochee Airport in Leh is counted among the highest airports in the world. The airport guarded by majestic brown mountains in the Great Himalayan range is a majestic spectacle with stunning escapes all around. Spituk Monastery in the vicinity of the airport adorns the entire region. Regular flights operate from Kushok Bakula Rimpochee Airport to Delhi, Mumbai, J&K, Srinagar, and Chandigarh. This is undoubtedly the highest airport in India.

Must Read: 10 Airports In Laos That Let You Travel The Nation Worry-Free

To have a better idea, you should go through the international airports in India map. Overlooking the spectacular surroundings in Srinagar is the Srinagar International Airport. The beautiful airport is located in the lush green environs and is co-owned by Indian Air Force and AAI. Integrated terminal and an asphalt runway make the highlight of this airport overlooked by the Great Himalayan mountains. The airport caters to the major airports in North India and Bangalore in South India.

Suggested Read: 10 Beautiful Places In India You Are Not Allowed To Visit In 2020

There are different ways of finding happiness. Here at Shimla Airport, the happiness lies in watching the plane land as it faces the vast Himalayas right in front of it. Located in the Jubbarhatti district of Himachal Pradesh some 22 km from the capital city is Shimla Airport. The airport is perched atop 5000 meters and was made only after crushing and leveling the hilltop. Planes to most of the Indian cities operate from here.

Renowned as the Kangra Airport, the Gaggal Airport is located in Gaggal in Kangra district in Himachal Pradesh. With Dharmshala and Kangra in the close proximity, Kangra airport is quite easy to reach. Among the list of popular airports in India in the north, Gaggal is crucial. If you are considering a trip to the mountains in the Great Himalayas, this airport can come handy. The airport is majorly operated by Indian Air Force and is connected with the national capital.

Nestled in the lush green mountains in the Northeast India, Lengpui Airport is a domestic airport located in Aizawl in Mizoram. The airport connects the northeast with the rest of India. Daily flights operate from Guwahati and Kolkata to Lengpui in Aizawl, whereas flights to Imphal operate thrice a week. The scenic airport is also notable because of its wonderful location at 2500 meters above sea level. There are several hilly streams running underneath the airport making this one is really special.

Suggested Read: Foreigners Can Now Travel To Nagaland, Mizoram & Manipur Without A Permit!

Located in the dreamy location of Andaman & Nicobar Islands, Veer Savarkar International Airport is another of the striking airports in India. With deep blue ocean and evergreen rainforest all around, this airport is a charming sojourn with nature’s grandeur all around. So, when are you booking your trip to Port Blair?

Can an airport get as exciting as this? Yeah, this one is the lone airstrip running to the southwest coast of India in the Arabian Sea. The only airport connecting the archipelago, Agatti Airport is a domestic airport connecting Lakshadweep to Bengaluru and Kochi. Encircled by a legion of blue waters, Agatti Airport is operated by the Airports Authority of India. The terminal building of the airport is capable of handling 50 people during the peak hours.

Now in the newly formed state of Telangana, Rajiv Gandhi International Airport is located in Shamshabad. One of the busiest international airports in India, RGIA has only one terminal and caters to popular cities around the world. With 46 immigration counters and 96 check-in desks, RGIA is a busy place. The majestic architecture of the airport with planes parked in one alignment makes it a popular attraction.

Suggested Read: 10 Best Beaches Near Hyderabad For A Relaxing Vacation With Your Loved Ones

Chennai International Airport in the Madras Metropolitan area is the popular airport that has your traveling worries sorted if you are going south. Interestingly, Chennai International Airport was the first and the best airport in India with adjacent domestic and international terminals. The regional headquarter of Airports Authority of India in South India, Chennai Airport is a leading airport in the list of airports in India. It is believed to be among the best airports in south India.

Suggested Read: Nightlife In Chennai – What’s Hot And What’s Not!

With a single terminal and single runway, Kempegowda International Airport in Bangalore is one of the most scenic structures in Bangalore. The popular South Indian airport is spread over an area of 4000 acres and is located on the outskirts of the city. Next time to take a flight to Bangalore, spend a few extra minutes to enjoy this scenic structure.

These airports see quite a lot of commute, making them very busy and hence are the busiest airports in India.

Image Source
This is one of the airports in north east India. Also known as Guwahati International Airport the Lokpriya Gopinath Bordoloi International Airport in Guwahati is the busiest airport in the Northeast India. Guwahati Airport also happens to be the sole and the easiest connectivity with the major cities across North India. The airport, located 26 km from the city center, is named after the freedom fighter Gopinath Bordoloi. The airport also serves as the airbase to the Indian Air Force.

Suggested Read: 11 Mystical Temples In Coimbatore: A Must-Visit On Your Trip To Tamil Nadu In 2020!

Image Source
This has to be the busiest of all the airports in India. Goa Airport, also known as Dabolim Airport, the only airport in the state. Spread over 638 hectares, this airport is well designed and resembles a dreamy spectacle by the side of the Arabian Sea. Due to the popularity of Goa, the airport sees 131 aircraft movement each day. The airport has an integrated terminal too for the convenience of the passengers.

Image Source
Netaji Subhas Chandra Bose International Airport is one of the most popular airports in India and is well-connected to other parts of the world. Located in Kolkata, the airport was earlier known as Dum Dum Airport. Currently, it serves as a hub for numerous airlines including Air India, Deccan Aviation, Blue Dart Aviation, IndiGo, DTDS, Jet Airways, etc.

Further Read: World’s Dangerous Airports: Where Take Off And Landing Could Be A Matter Of Life & Death

Fly high and take to these popular airports exhibiting the best of India. For these places must be on your bucket list! And if you have moments to spare there’s a lot to explore in the city. There are as many as 18 upcoming airports in India, which would make traveling all the more easy. Till then, take a trip to different parts of India, and let these airports serve you better!

Q. Which Indian city has the best airport?

Q. Which are India’s international airports?

Q. How many airports are in India?

A. In total, there are 468 airports, flying schools, military bases, and airstrips can be found in the country of India. Amongst these, 123 are those that have scheduled commercial flights that also include the ones used for the army as well as dual civilians, while 34 are international airports.

Q. Which state has no airport in India?

A. The state of India that does not have any airport is Arunachal Pradesh. In order to reach the northeastern most state of India, you can take a flight to Ujjalpur in Assam that will land in Lilabari Airport. This airport is located at a distance of 57 kilometers from the capital city of Arunachal Pradesh, Itnagar. You can easily get a cab from this airport to the Indian state.

Q. How many international airports are there in Kerala India?

Q. What are the main airports in India?

Q. Which is the best airport in India?

Q. Which is the smallest airport in India?

A. The airport of Trichy, Tamil Nadu is considered to be the smallest airport in India. The runway here is also the shortest in terms of the length.

Q. Which is the biggest airport in India?

A. Indira Gandhi International Airport in the capital city of Delhi is the biggest airport in India.

Camping In Shimla: 15 Places To Go For An Adventure Instilled Romance In 2021

Spend Just 5 Days In Sri Lanka In 2021 To Explore The Tropical Paradise That It Is!