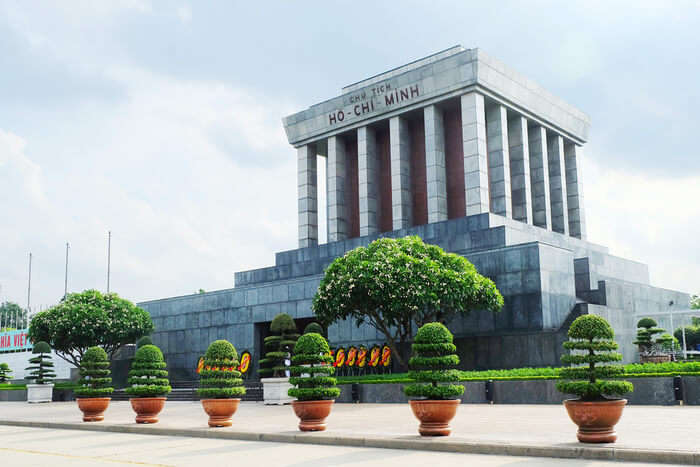 Popularly known as Uncle Ho or Great Father, Ho Chi Minh was the first respected president of Vietnam. His patriotism and dedication towards the protection of his country from invaders is what keeps him alive in the hearts of Vietnamese even long after his sad demise. He was the one to found the first Vietnamese Communist Party and fight against the French successfully for the independence of Vietnam and became the first-ever president.

Even though he wanted his cremation to be simple and his body to be buried in three parts of the country, the people of this nation decided to dedicate a mausoleum to him. After the great war started, the country was divided into 2 parts, the North dominated by Vietnamese and the South harshly dominated by Americans. Since the wish of the Uncle to see the country reunited and meet the people on the other side was not fulfilled, the Ho Chi Minh Mausoleum was built. The sole purpose of building Ho Chi Minh Mausoleum was to keep his body safe so that people from any part of the country could come and visit him.

The Ho Chi Minh Mausoleum complex has become a crowded place today with a number of people from around the country and outside the country coming in to pay respect to the Great Father and to learn about the history. Located in Ba Dinh Square in Central Hanoi, the place is traffic free and contains monuments, museums, pagoda with a peaceful and respective environment. Specifically, the Ho Chi Minh Mausoleum complex consists of Ho Chi Minh’s Mausoleum, Ho Chi Minh’s Stilt House and the Presidential Palace, Ho Chi Minh Museum and the One Pillar Pagoda. The visitors may explore this place and can find it amusing because it is not only a built attraction but a part of a remarkable history. Ho Chi Minh Mausoleum is the heart of the complex as their resides the body of the president. Ho Chi Minh Mausoleum body has it protected in a glass case with military guards all around him to inspect his body and the visitors. By far, the visit to all the areas of the complex has been considered worthy.

Must Read: Top 10 Places That Are Perfect For Paragliding In Vietnam

The complex is pretty much listed with dos and don’ts that you should keep in mind if you are planning to visit the famous attraction in Hanoi.

Now the list of the thing that you will see within the complex, let’s look around in a little more detail about these attractions.

The body of Uncle Ho is preserved in a glass and is in the center of the hall. The gateway to the hall is guarded by armed guards and number of them are present inside the hall, who will have you respect the private area and follow the rules. The Mausoleum is usually closed between September to November when the body is taken to Russia for its sustenance.

2. Ba Dinh Square – Where it all begins

This the square in front of the mausoleum, which is pretty huge which may be the first thing you notice after reaching there. This was actually made by the French Colony, later in 1945 President read the letter of independence here which makes it a milestone in the history. Twenty-four years later, the place was the venue for the funeral of Ho Chi Minh. Then the decision of building the Mausoleum was made.

This is the luxurious and expensive palace which was built for the Governor General of Indochina. This palace has a symbolic architectural design to other French architectures with a similar yellow building that was built during this period. After the independence, the president was suggested to live in this palace. He declines this offer by stating that he hated the smell of the invaders in the palace.

Suggested Read: A Guide To Vietnam Museum of Ethnology For History Buffs

This is the stilt house that people built for President after he refused to stay in the palace and lived in a small place with only 2 rooms. This house was where he lived and worked until he rested. The surrounding of the house is very peaceful and beautiful with a small pond and full of greenery. The house is 2-storey made up of woods and simple design. The visitors are allowed to take a glance at the rooms only from outside.

Suggested Read: Villas In Vietnam: 6 Places To Hit The Sack In Trung Quốc

The Ho Chi Minh Museum was built to mark the 100th birthday of Ho Chi Minh. The visitor can view almost everything related to the President. It has numbers of valuable photos, tokens, military orders of the achievement and revolutions of the Communist party.

Very famous as “the most unique pagodas in Asia” – One Pillar Pagoda is the last place of the attraction of the Ho Chi Minh Mausoleum complex. Its unique architectural structure that appears to a lotus is straight up from the lake with a square structure lying on a stone pillar. It is simply stunning and pulls a huge crowd any season of the year.

Further Read: 12 Indian Restaurants In Vietnam You Should Visit To Taste Desi Flavours

There are many Ho Chi Minh Mausoleum tickets and tours available which come with a package of meal and transportation which may make your trip more comfortable. Make sure you visit this famous attraction on your next trip to Vietnam to know well about the history of this country and its people.