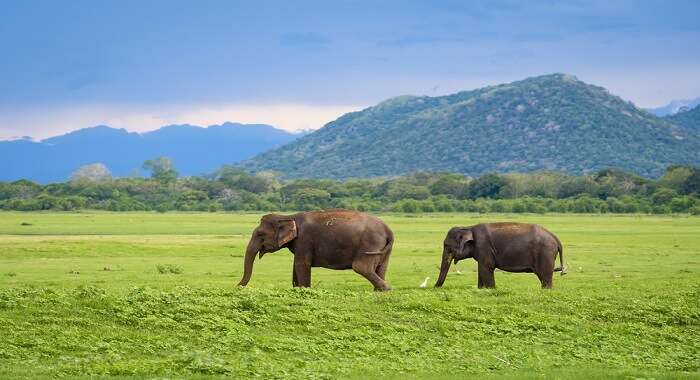 Sri Lanka is home to twenty-six national parks and the Kaudulla National Park is one of the most eminent parks, it is spread over a massive 6656 hectares and is home to a countless number of wild animals, aquatic animals, and exotic birds. The Kaudulla National Park is also connected to the Somawathie Chaitiya Park and the Minneriya Wildlife Park, both of which are excellent spots where you can explore Sri Lanka’s wildlife, especially elephants.

Declared as a National Park in the year 2002, the Kaudulla National Park was the fifteenth nature reserve that was given the title. The Park also brings tourists and travelers from all around the world mainly to see the elephants population that lives in abundance at the Park. In the dry seasons, all the elephants from the surrounding National Parks including the Kaudulla, Wasgomuwa and the Somawathie Chaitiya Parks come together at the Minneriya National Park in an unofficial ceremony called “Elephant Gathering” by the locals.

When you look at the map of Kaudulla National Park a little closely, you will notice how the National Parks in Sri Lanka are so closely connected to each other, making it easier for animals to go from one park to the other in search of food, water or mates.

The best time to visit the Kaudulla National Park is between the months of August and December so you can see a maximum number of wild animals at the Park. The famous Sri Lankan elephant gatherings take place in the months of September and October so plan your visit accordingly.

How To Reach Kaudulla National Park?

You can reach Kaudulla National Park from the Colombo-Trincomalee main road if you are traveling by road. You can hail a cab directly from Trincomalee to the National Park which would cost about INR 2300 to INR 2800 and reach you to your destination in about 1 hour 20 minutes.

Where To Stay Around The Kaudulla National Park?

The Kaudalla National Park lies between the coastal city of Trincomalee and Dambulla so you can find accommodation at one of the following hotels:

Dambulla Rock Arch is located only two kilometers away from the Dambulla International Cricket Stadium and only at an hour’s distance from the Sri Lanka airport, making it one of the great place to stay at when you are in Sri Lanka. Dambulla Rock Arch is a bed and breakfast concept with well-furnished rooms having access to beautiful views of the gardens. The guesthouse also has pick-up and drop facilities for guests coming in from the airport.
Where? 696/4, Anuradhapura Road, 21100 Dambulla, Sri Lanka.

Suggested Read: Take The Safari In Colombo To Spend Some Time In The Wilderness & Cherish The Rare Fauna

The Sevonrich Holiday Resort is a great option for those looking for more of a fun time with family and friends. The resort is located in Dambulla and has an outdoor swimming pool that all the guests can use. The better part about this resort is that you don’t need to step out of the resort to grab a meal at the resort itself has an in-house restaurant that serves up yummy food. We suggest you go in for stay packages that are inclusive of the buffet breakfast so you can pack yourselves up on some sumptuous food before you take off to exploring the places around.
Where? No:151, 2nd Lane, Jayamawatha, Yapagama, Dambulla, 21100 Dambulla, Sri Lanka.

What To See In The National Park?

What you will see on the park tour:

Suggested Read: 7 Adventure Places In Colombo For A Thrilling Vacay

Things To Do At Kaudulla National Park

If you want to explore the national park, there is no better way to do it than to do a jeep safari through the park. If you’ve been on safaris before, you might have had disappointing times where you don’t see any animals all through the safari. However, if you are on the Kaudulla National Park safari, you will see a lot of wild animals roaming about freely in the park. The jeep safaris usually start off from the main entry gate of the Kaudalla National Park and take you around the entire park to watch the wild closely.

As you might have already gathered, the elephants at Kaudulla are the main stars of the National Park. Irrespective of whether you are fond of elephants or not, watching the “Elephant Gathering” at Kaudulla is a sight you that you just cannot miss! These elephant gatherings peak around the months of August and September where you can see herds of elephants coming together to chill by the park’s reservoirs while munching on some fresh grass.

3) Photography in the wild

We all have hidden photographers in us and the Kaudulla National Park is sure to bring out the photographer in you. While you are on the safari, be very vigilant and look around for wild animals that hurry through the forests, so you can quickly pull out your cameras and take beautiful shots of these animals as they are in their natural elements, jumping across the forests.

Further Read: Top 5 Colombo Beaches That Are A Must On Every Traveler’s Bucket List!