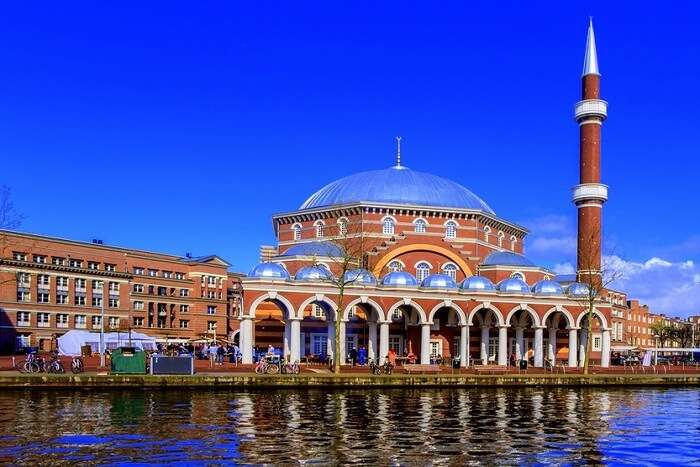 Netherlands is the most extravagant country boasting wonderful canal waterways and exquisite architectural monuments. It has a rich and diverse history which is clearly depicted in the various praise-worthy structures housed by it. One may wonder how many mosques in Netherlands are there? Well, it houses more than 400 mosques which are spread across many cities and towns of the nation with the most popular ones being accommodated by Amsterdam, Rotterdam and Harlem.

Netherlands mosques can be easily accessed by the Muslim tourists for praying and even the other explorers here can visit these mosques to marvel at the architectural intricacies of these structures. Here are 10 most famous mosques in Netherlands which are worth a visit. Keep scrolling down to know more!

This is a grand mosque which was established in the year 2001 and is perfectly located in northwestern Amsterdam along the vast pathways. Mevlana mosque majorly serves Turkish-Dutch Muslims and was named after Rumi. The minaret and the wonderful dome featured by this mosque has made it earn the title of the most beautiful mosque in Rotterdam in the year 2006.

Ulu mosque is ideally situated at the Mosque Square in Utrecht, which is the first ever street in Netherlands to be named by taking inspiration from Islamic religious building. It houses a beautiful Islamic prayer hall where one can witness hundreds of Muslims praying every day. It also hosts a separate room which was created keeping in mind the number of Jews and Christians in the surrounding area. At the ground floor, there are a few shops which sell religious articles.

This is one of the largest mosques in Netherlands which is decorated with minarets and crowned with domes. The prayer hall accommodated by this mosque can host up to 1500 worshippers every day. There are other rooms inside the mosque as well which are dedicated to different purposes including administration room, education room, cultural event room and social activity room. The west side of the building has the entrance which leads to the central main area and the mihrab which is semicircular in shape.

This is one of the most modern mosques in Netherlands which features a classy glass dome. Even though the architectural designs are much more modern when compared to the other mosques in Netherlands, the basic principles and the references to symbolism and geometry remains similar to that of the traditional historic mosques. The number 40 is very significant in the Islamic culture and taking this into account, the dome of the Selimiye mosque was designed in a way to contain 40 triangular glass panels.

El Tawheed Mosque is one of the famous mosques in Amsterdam Netherlands. This mosque was founded in the year 1986 and is ideally located in the Old-West part of Amsterdam where the maximum Muslim crowd of the city is concentrated. It has a vast prayer hall which can accommodate more than 500 worshippers at a time. This mosque remains crowded, especially during the Friday prayers. One can check out the various Islamic religious books, DVDs and CDs in the bookstore which is inside the mosque complex.

Al Karam Mosque exudes the true sense of the Islamic culture. The main aim of this mosque is to make the people aware of the messages by the Quran. Every day all kinds of Islamic prayers are practised by the participants and worshippers here. The Islamic teachings here are in the Dutch language and even this is held on a regular basis. The best part about this mosque is that it is very neat and clean and this contributes positively to the calm and peaceful environment of the mosque. This mosque accommodates a separate room for ladies as well.

Westermoskee Mosque is a well-known mosque among the Muslim population in Amsterdam. It is located in close proximity to the Schinkel river which is a famous canalized river in Chassebuurt region. The architecture of this supreme building draws inspiration from the French designs which were given out by the famous architects Nada Breitman and Marc. The construction of this magnanimous prayer destination was brought to completion in the year 2015 and then in 2016, it was opened for prayers.

Suggested Read: 22 Best Places To Visit In Netherlands: The Perfect Mixture Of Art And Culture

Fatih mosque is nestled in central Amsterdam in the Rozengracht region. It was formerly a Roman Catholic church which was later transformed into a beautiful structural mosque. Only a few modifications were done during the conversion of the church to a mosque but other than that almost all the original features of this building still remain intact due to which it has been placed under the monumental list of Netherlands.

This architectural building serves both as a mosque and cultural centre in the Nieuw West region in Amsterdam. This mosque got its name from the blue designs which can be prominently seen in the architecture of the building. Out of the whole list of mosques in the Netherlands, this is unique in its own way as it lacks the minarets as well as some of the other traditional symbols which are present in every traditional Islamic mosque.

Mobarak Mosque was the first ever mosque which was built in Hague in Netherlands for the purpose of praying by the people of the Muslim community. Qudrat-Ullah Hafiz was the first ever Muslim missionary who came to Netherlands in the year 1947. Later, the magnificent architecture of the Mobarak Mosque was designed by Frits Beck and the construction of this building was fully completed in the year 1955.

Further Read: 15 Best Things To Do In Netherlands For Treating The Adventurer & Nature Lover In You

The mosques in Netherlands are architectural wonders which are worth a visit. Get to experience this unique adventure by planning a trip to Netherlands with Travel Triangle and getting your hands on exciting deals and offers.