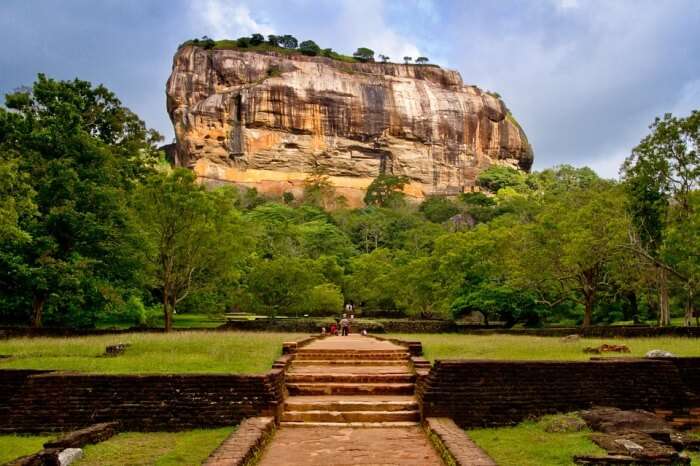 The massive rock of Sigiriya, situated between the Sri Lankan towns of Dambulla and Haburane, is serenely panoramic in the midst of the Emerald Isles’s Central Province. What could easily have been an eyesore, is instead an awe-inspiring edifice, resplendent in its historical and legendary status.This ancient city of Sigiriya has been made with paying much attention to mathematics and symmetry. As a result, Sigiriya in Sri Lanka is a brilliant example of ancient urban planning and also has become a World Heritage Site, after being considered and declared by UNESCO.

About Sigiriya In Sri Lanka 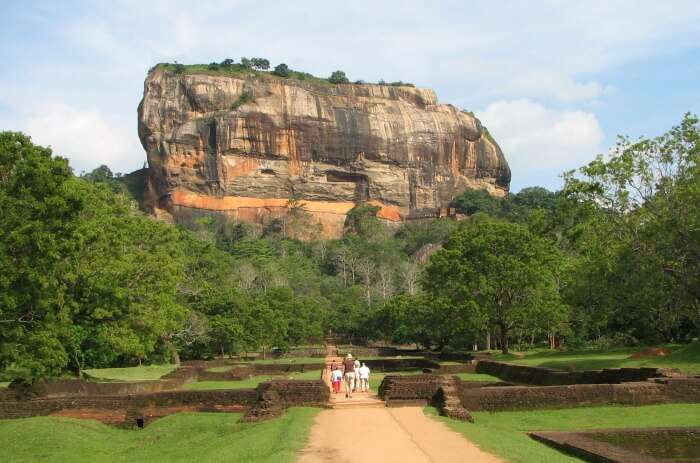 The history of Sigiriya in Sri Lanka states that it was the canny King Kasyapa in the 3rd century who realized the rock’s potential for deterring unwanted visitors and enemies and hence decided to build his fortress there.
The structuring of the city began at the earliest and was soon a fortress. It was a city which included a citadel, two main palaces (the upper and the lower), gardens, waterways and the famed mirror wall as well as the massive lion’s gateway. It was, in fact, the huge big lion door that the commissioned, which gave the rock its moniker- Sinhagiri in Sinhalese, and in other words the Lion Rock. However unfortunate it might be, after the demise of the king, the palace was abandoned until the Buddhists came over like angels from heaven and inhabited it by converting it into a monastery till the very end of the 14th century. 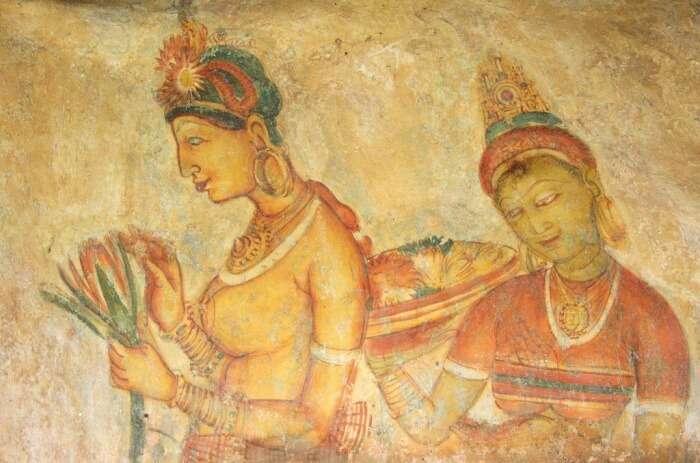 Something as old as Sigiriya is bound to the web in mythology. Researchers surmise that this ancient rock could very well be the ancient city of the Gods- Alakamandava, which was built by none other than Kubera, half-brother of the great Ravana himself! As legends go, the rock had been constructed under the aegis of the consummate architect Maya Daanav who worked in compliance with the instructions of Ravana’s father -King Vishtavasa.

Time passed and Sigiriya was once again slowly but surely reclaimed by nature for her own. She covered its proud Lionsgate with a motley of local flora and bushes which were frequented only by wild animals after a while. As coincidences go, it was rediscovered by Major Jonathan Forbes of the British Army and thereafter, an archaeological team led by HCP Bell took up the challenge of restoring it to its former glory. Excavations revealed that rather, unfortunately, the erstwhile famous lions head had fallen prey to the onslaught of time and the vagaries of weather erosion.

Things To Do In Sigiriya In Sri Lanka

Discovering Sigiriya is a matter of a days excursion for any tourist. Other than climbing up and traipsing around the rock there are quite a few things to do around Sigiriya as well. 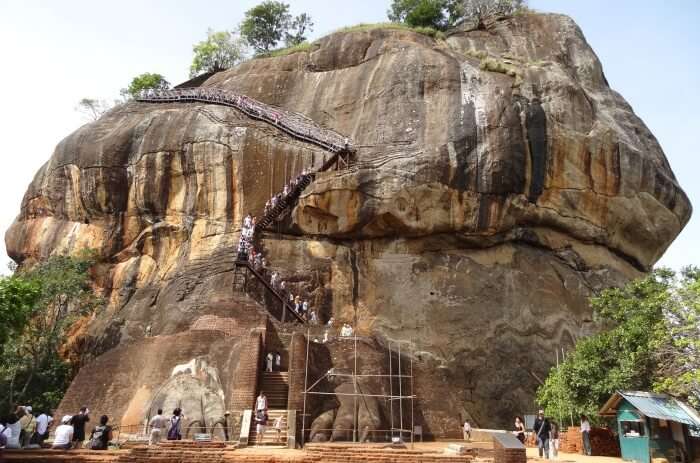 The city of Sigiriya has set an important milestone in the history of Sri Lanka not only under the context of planning an urban city but also as one of the most mathematically and statistically built ancient cities. Despite passing through many centuries, some of the famous structures of the city, although almost worn away, still prevail.
The palaces in the Sigiriya have an uncanny resemblance to Ajanta caves in Maharashtra, India, with respect to the designs and paintings i.e. the frescos. Despite being similar in many ways to the Anuradhapura style of paintings, the ones over here were quite unique and different than those of Ajanta caves. However, time wasn’t able to retain the exquisiteness of such art and so many of the paintings have vaporized. 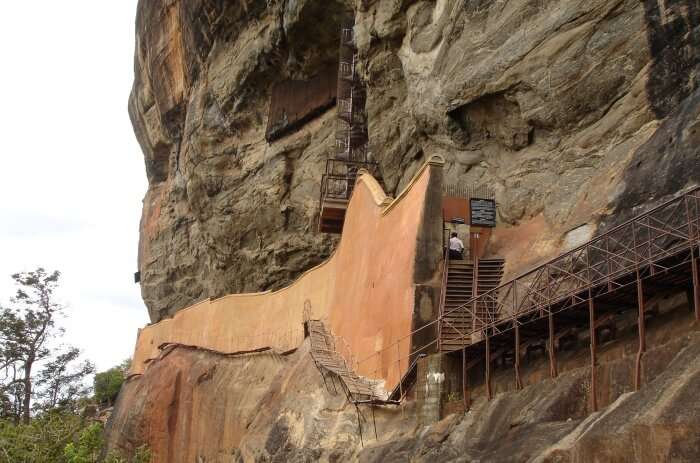 A wall, so well polished that one could see their clear reflection, was once the king’s most favorite. And why wouldn’t it be? A magnifier of beauty and personality is something probably everyone would relish. Unfortunately, the time has again shown its ugly side and taken away much of its grandiosity, leaving behind, just a rock. However, knowing that it was something significant and important, the wall is still a hot photo spot and also the most favorite scribble board for the tourist.

3. Fly With The Butterflies In The Gardens 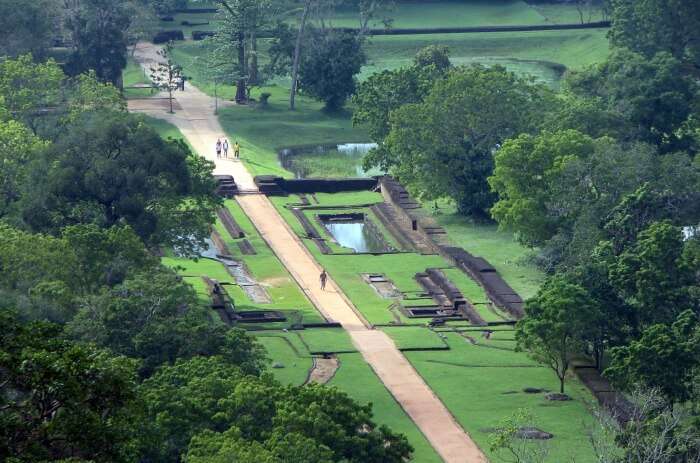 Sigiriya mountain in Sri Lanka is surrounded by vast spaces of centuries-old landscape gardens. During the thriving days of the city, these gardens were planned accordingly and then divided into –water gardens, terraced gardens and boulder and cave gardens.
These gardens are the oldest surviving models of an ancient form of gardening called Char Bagh. The cave and bouldering gardens were often used by the army to roll down huge stones and rocks from the Sigiriya mountain in order to keep their enemies away.

4. Visit the Golden Temple in Dambulla 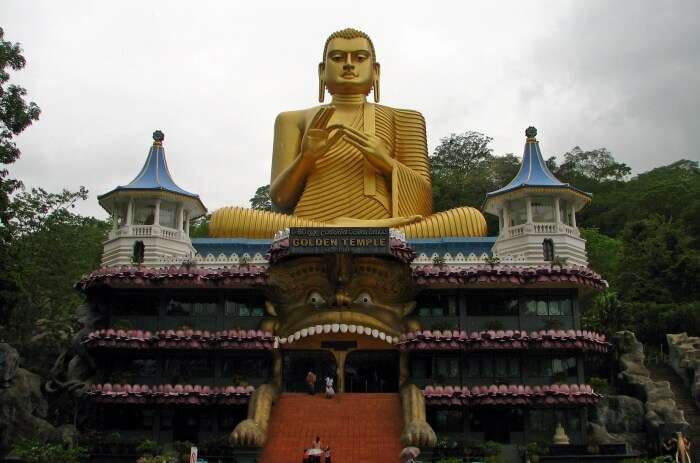 After completing a tour of the ruins of the fortress, one can always visit the Golden Temple in Dambulla which is just 20-25kms away from Sigiriya. The Dambulla cave temple is said to be the largest and the most complex cave temple in entire Sri Lanka. The whole area contains almost 80 caves that have been documented along with statues and paintings, most of which represent Gautam Budh while some have been interpreted as God Vishnu and Ganesha. Near the cave complex, is a graveyard which has buried within it human skeletons as old as 2700 years. This leads on to the interesting fact that in these caves lived the prehistoric Sri Lankans before the arrival of Buddhism in Sri Lanka. 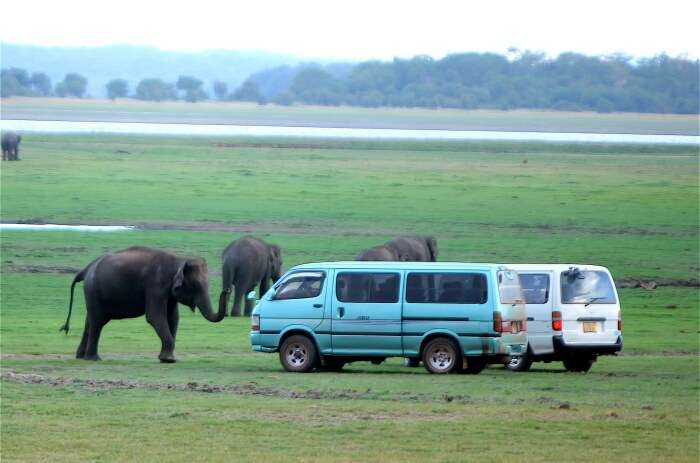 Just at a distance of 27-30 km, is the Menneriya National Park, which is the has the world’s largest gathering of the Asian elephants. Exposed to the receding waters and ever perennial greenery, one never goes with a broken heart, for not being able to see an elephant in the national park. Apart from elephants, this National Park also houses many varieties of birds, butterflies, amphibians, reptiles, and fish. 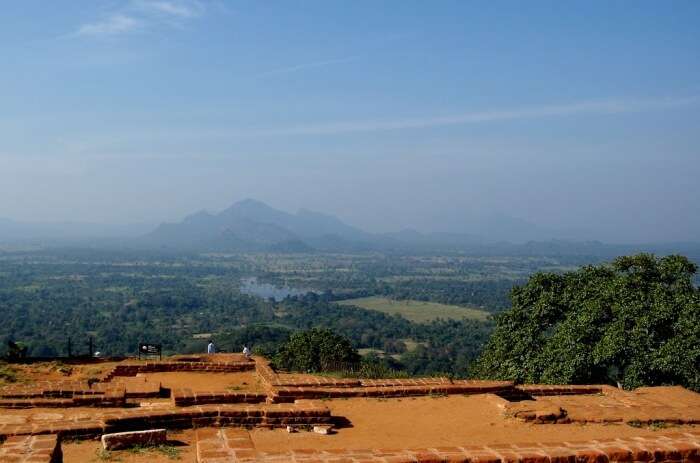 Sigiriya should be visited preferably in the winters and the best month by far for a visit in February when the weather is balmy and salubrious. As it is based in a tropical country situated just above the equator, heat, and humidity prevail throughout the year and the temperature ranges between 28-32 degrees, with a UV index of 11. The best time to climb up to the top is either early in the morning or late in the afternoon when the sun is not blazing in the sky. Thunder squalls and torrential rains can also hit anytime..

Where To Stay In Sirigiya? 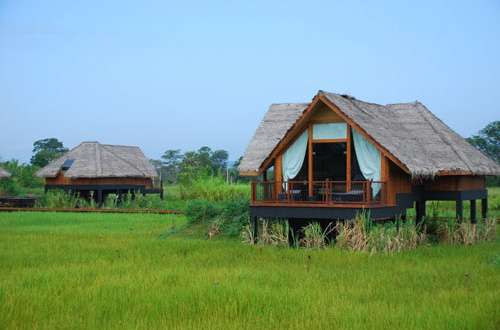 The best way to book the accommodation would be to book one online. This will make the whole process of booking a hotel much easier. Although Sri Lanka is not a very expensive country, you will still find luxurious places to stay in Sigiriya Sri Lanka. The only drawback is that after a venture of the entire place, a person wants to go and rest as soon as possible and not ride in buses and taxis covering large distances to reach the hotels. However, the choice is yours!

Further Read: 12 Alluring Things To Do In Nuwara Eliya, The Heart Of Sri Lanka In 2022!

Traveling to such historical destinations is sometimes like taking a hike to the past. So utilize the pair of eyes that you have been blessed with and work upon those leg muscles, for there is a lot of sightseeing and walking to do in this journey to Sigiriya in Sri Lanka. It will definitely make your trip to Sri Lanka a raving success.